A plea for flaps

This morning was ‘warmer’ than it has been, by my reckoning it was 5 degrees when i set off. Of course with the balmy conditions we get rain so that’s nice, something to cool you off. The ride out to Hatchmere was in to a decent headwind carrying a friendly amount of precipitation so i was quickly wet. Wet, but clean. I passed Iain and Phil at the side of the road just before Hatchmere and, aware of the time, i carried on to the meeting point, arriving just as the others were leaving. Calls of, ‘half a rev’, slowed the group down and the 2 stragglers latched on by the end of the Forest. Our group consisted of Chris, Jimmy, Stuart, Shaun, Nigel, Phil, Iain and me.

As i mentioned, i was clean when i met the others, by the time we got to the other end of the forest i was pretty filthy already and just got dirtier. Should there be an ‘ample mudflap’ rule? Perhaps the club could appoint a flap measurer whose job it would be to ensure all flaps met the required standard. Anyway, i got mine off eBay, ‘RAW’ flaps, dead cheap, easy to fit and they keep you and everyone around you clean. Don’t leave home without them!

We rode out via Tarvin and on to Bangor on Dee before coming back to Holt and on to 2 Mills, the weather eventually brightening up. The group stayed together well, going along at a decent pace with everyone taking their turn. There was, as always, a headwind going along the river and we did through and off along there. At some point we lost Nigel, he had peeled off and taken a short cut to the Mills so was there before us. Iain did a good job of winding things up in the run up to the cafe and indeed won the little sprint. 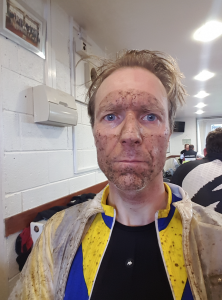 Beans on toast, eggs on toast, baguettes and plenty of tea and coffee all around replenished us all before we set off again. Freezing and shivering for the first 10 minutes before things inevitably wound up going past Cheshire Oaks, Jimmy putting in his usual surge before slowing off on the road to Mickle Trafford, heading off to the roads around Kelsall apparently. We all worked nicely together before losing Nigel and then Chris down the lanes. Then came the forest. Stuart lead us up past Fox Howls before Iain stood on the pedals and he was away, Phil followed with Stuart and Shaun in pursuit. I changed down and as per usual unshipped my chain. Stop, untangle it, Chris comes past. I get back on. By the time i’d got back to Hatchmere everyone had ridden on so i plodded along by myself. Aware that my mileage was quite high for the day i took a little detour, arriving home with 101 miles ridden.