A ride through Sandstone country to Erbistock 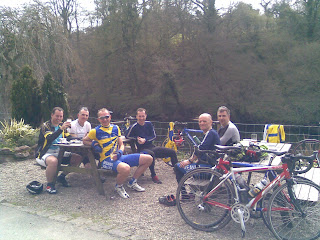 A good turn out at Hartford – the shorter group set off for a circuitous ride to the ice cream farm whilst I joined the longer group, setting off to Bangor on Dee and led by Richard Munro. There were nine of us, some of whom were dressed for a cold winter’s day. As we rode through Whitegate the mist cleared and the sun shone, and by the time we got to the top of Harthill on the Peckforton ridge we had some very hot riders! This was spring cycling at its best, past a succession of chocolate-box villages and old sandstone churches, with hedges greening up, trees in blossom, lots of daffodils and even primroses along the verges. Graham, Dave Astles and John Green turned off for Holt and the rest of us continued on to Bangor, at which point Chris came up with the idea of extending the ride to Erbistock – a pretty hamlet next to the River Dee – pretty enough to make the price of the posh (but minimalist) “open sandwiches” tolerable!

Kevan rode most of the return ride on the front, with Carl, Chris and John nipping out of the slipstream to up the ante and race up every rise/hill, so the pace inevitably picked up. We didn’t hang about – and also didn’t stop once between the cafe and home which must be some sort of record – no mechanicals, no red lights, and no calls of nature – and I found myself riding up hills in my big ring, which made me feel like a proper cyclist!
Thanks Richard for a great ride, and thanks John for the welcome push just as we approached Whitegate – you obviously spotted that my legs had finally given up!
Eleanor.
Road Runs
Llangollen and the Berwyns 17 April
Delamere Saturday 1 May