This weeks ride was pinched from The Edge Cycleworks website. This is a brilliant resource for off road trips around North Wales and England, but a few days before we went I’d been thinking that 24 miles might be a bit short, would be done by just after lunch, so perhaps it needed a bit of an extension or loop at the end. 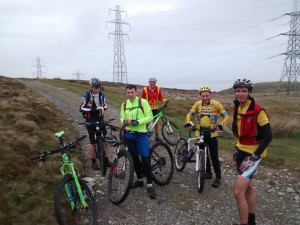 A band of happy cyclists, (before the 40 minute ascent)

As 24 mile rides go, that was an epic. Paul commented, (I think it was just after we’d been discussing Giles getting close to bonking and the fact that we were just over half way round, some 3 hours into the ride) there’s no flat bits at all, and that general trend continued right back to the cars at Conway. It did become a bit quicker later on, due to the first 10 miles being primarily uphill with 6.5 mile of that coming all in one lump from Rowen to Drum mountain. Of course what goes up must come down and from the peak of the ride, with views over the Menai Straits and the east end of Anglesey  we battered down, first a properly rocky double track interspersed with waterbars and drainage channels then typically Welsh mountain sheep grazing fields for 3.5 miles. 15 minutes, even at up to 30mph doesn’t do much to increase to increase a low average speed though, especially when you have to stop to repair multiple pinch punctures.  Not only tubes, but also my usually reliable tubeless tyres couldn’t deal with the punishment, spitting their sealant all over the hill. 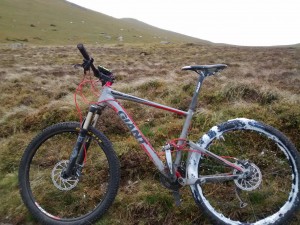 The product of over exuberant descending.

The route became a little more rolling after Llanfairfechan as it traversed the Welsh coastal path and when we neared Llandudno we were treated to a formation flypast by the Red Arrows, almost certainly a tribute to the heroics of our day out. Unfortunately no one could pick their camera out of trail packs rapidly enough to record their salue. 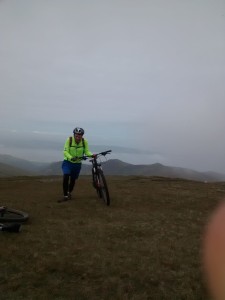 In the end we grovelled back to the cars just after 4.00pm and with 5000ft of climbing under our wheels. A real testing day out that the climbers amongst you would have bloody loved.