Who’s for seconds? The Wrinklies are! Christmas Dinner 2015

It’s that time of year. Warming up for Christmas, and what better way to do it than join the traditional Wrinklies ride to a Christmas dinner.

Arrived at Hatchmere in shorts and a long sleeved top, just to mark the fact that we are sharing a climate with the Australian Christmas, except that we aren’t supposed to, and it is most unseasonal for England on the 16th December for it to be 14 degrees celsius! 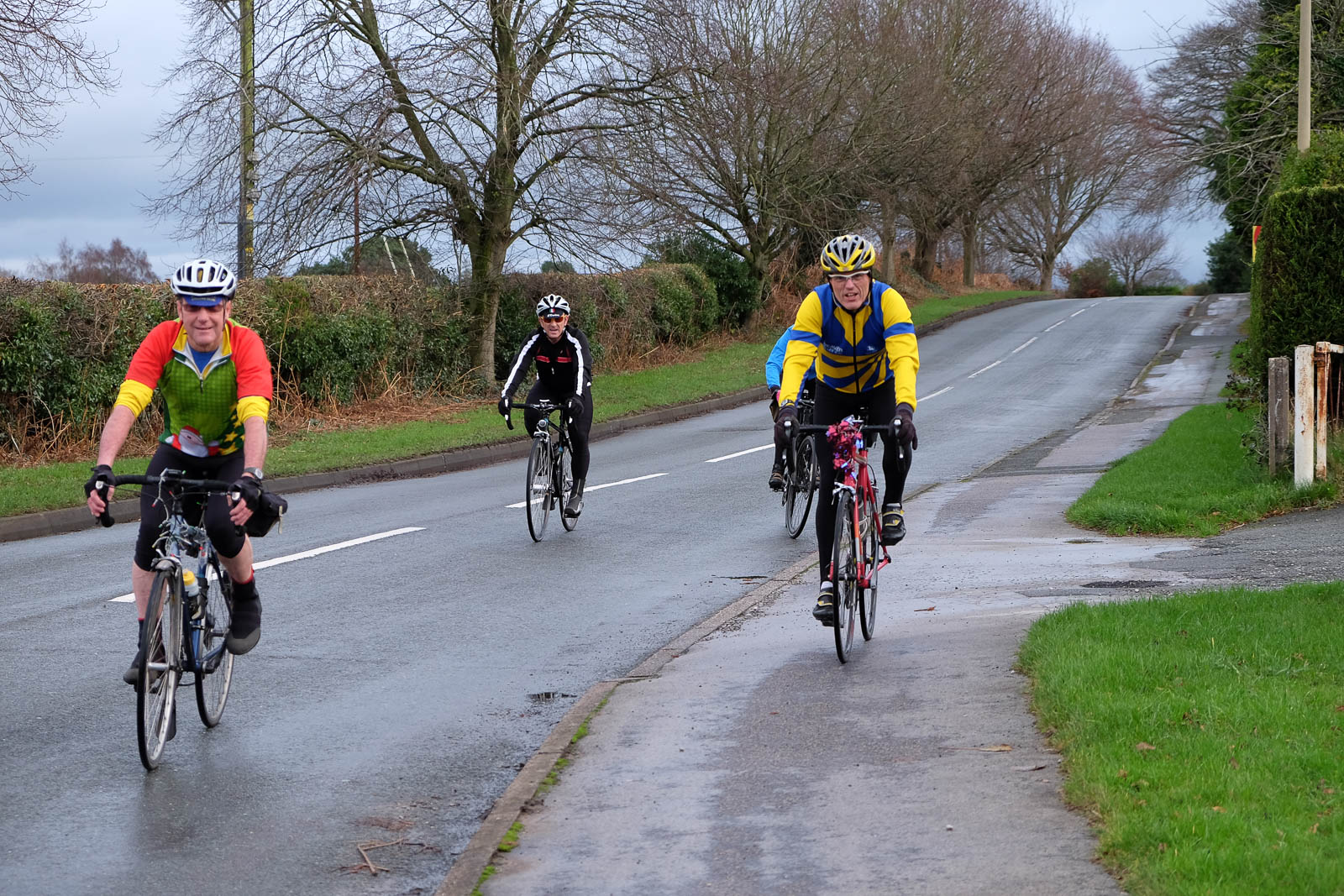 In they rode, starting to look festive.. 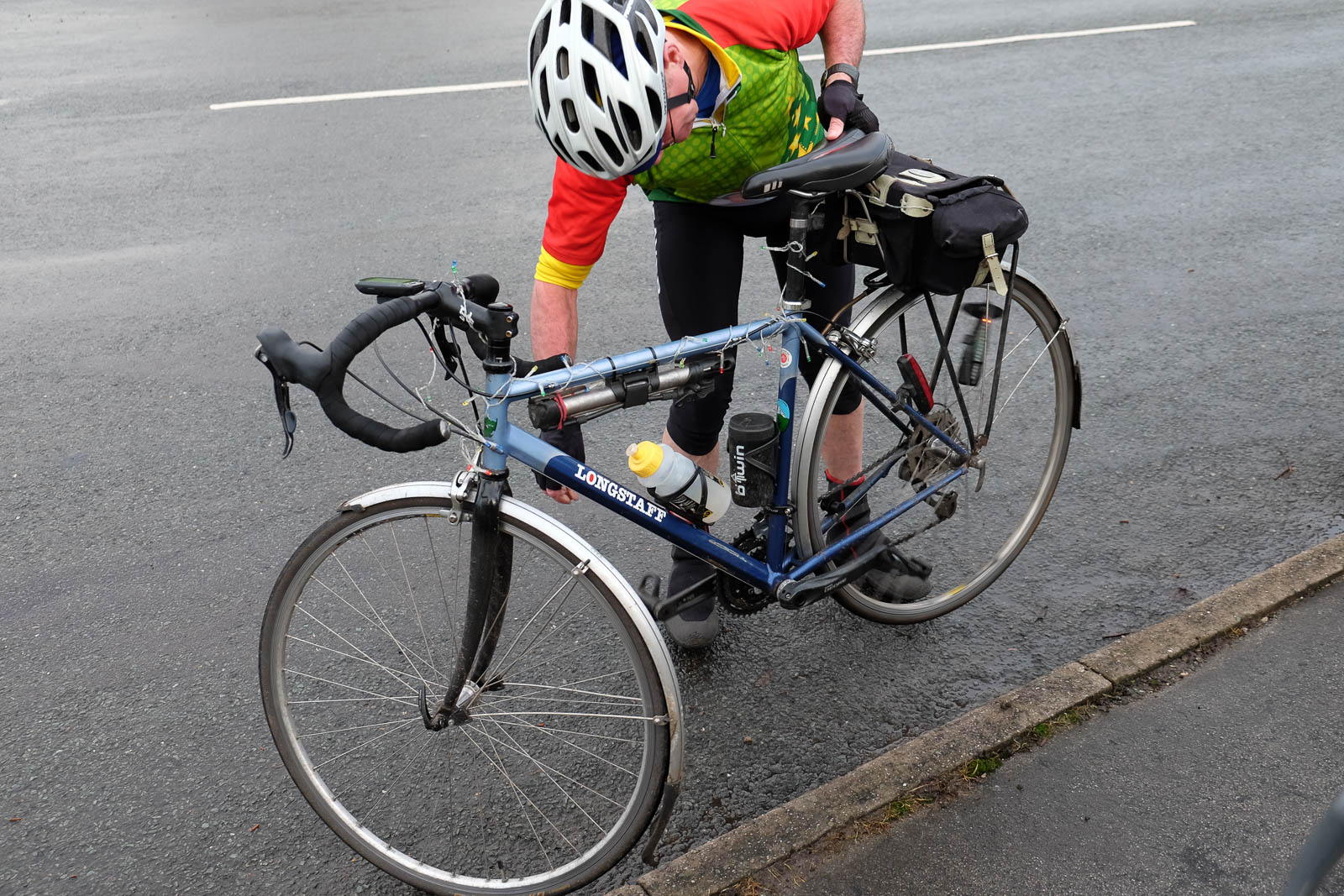 ..although there were some technical issues with various flashing gizmos.. 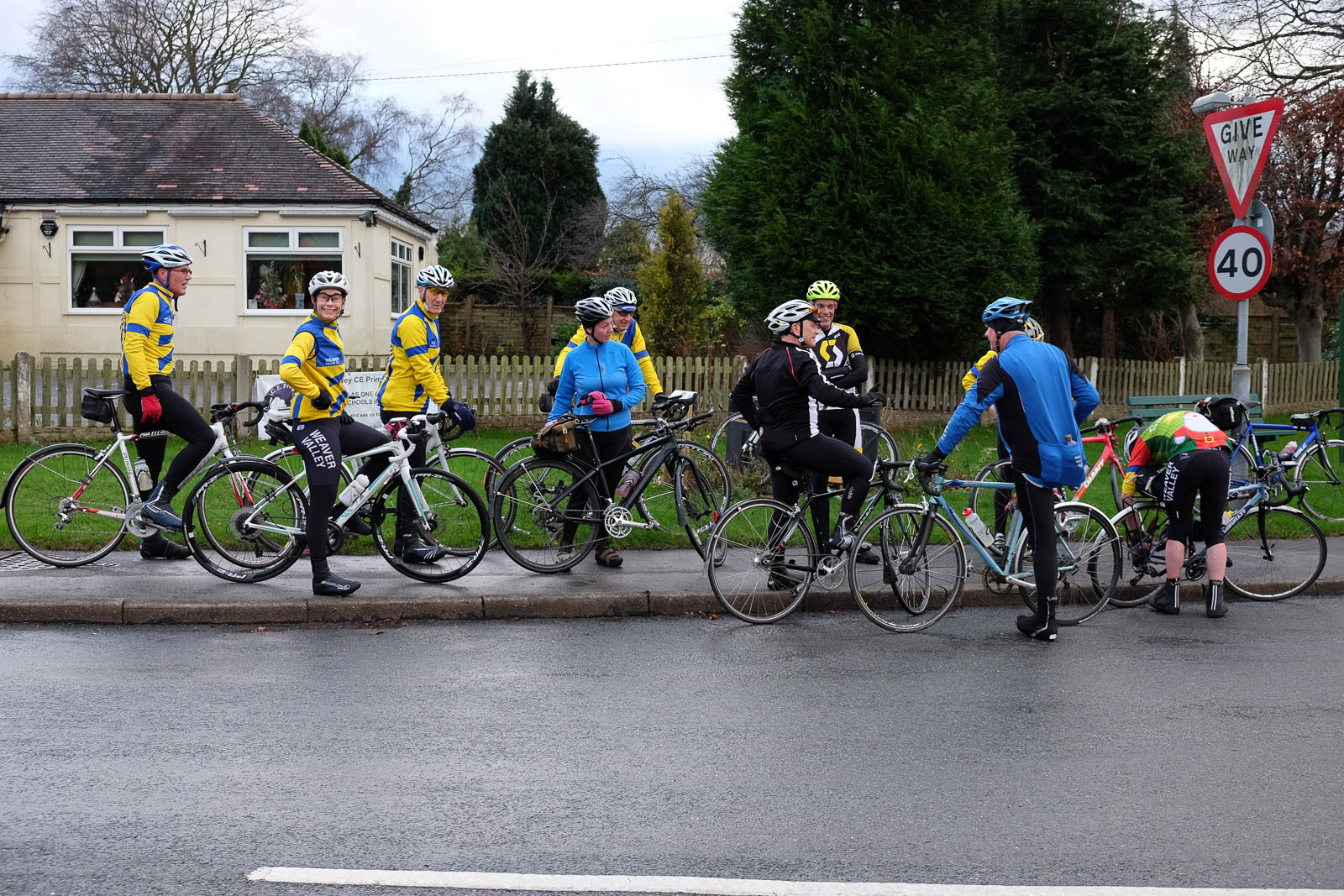 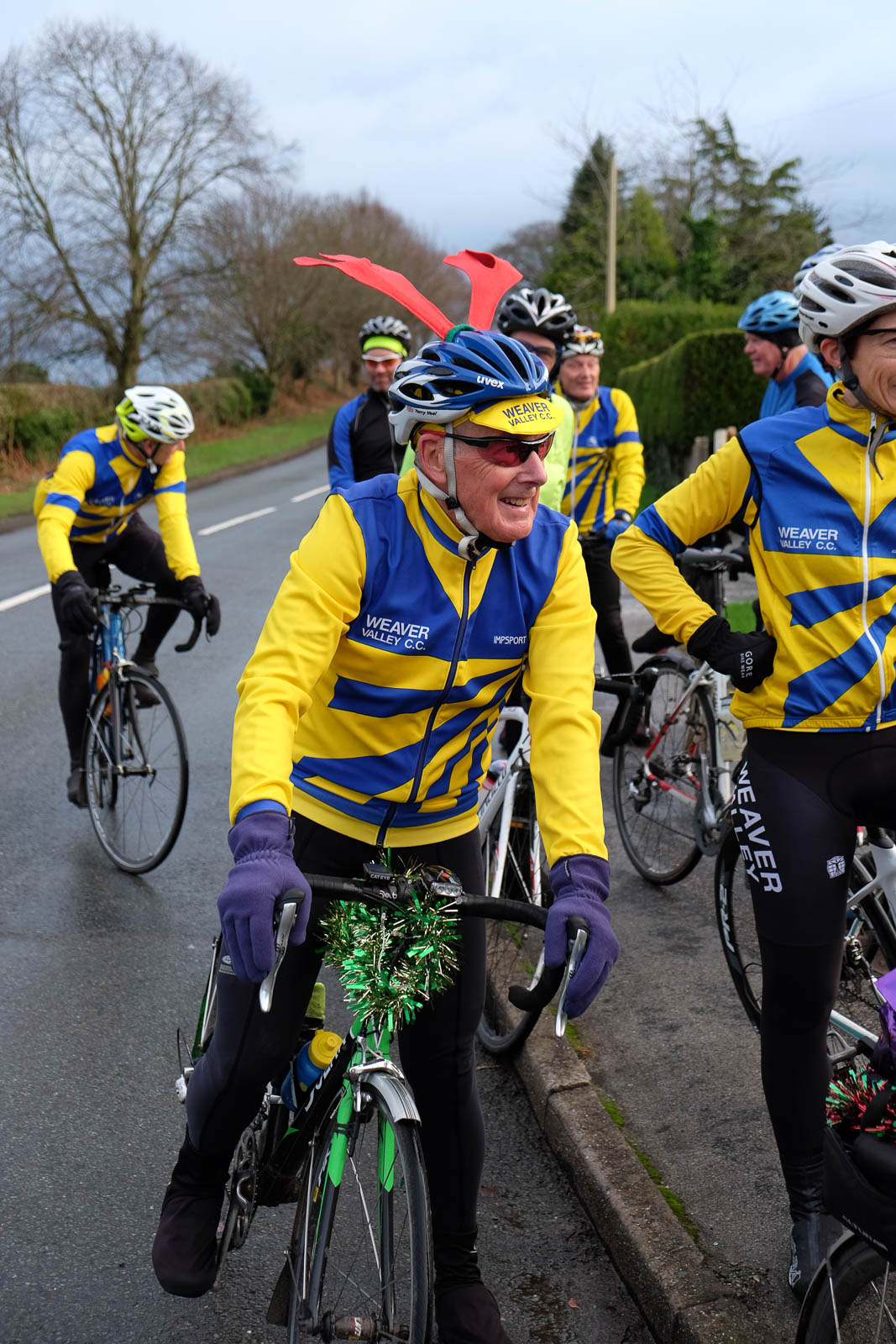 Some were dressed and decorated in an obvious Christmas fashion.. 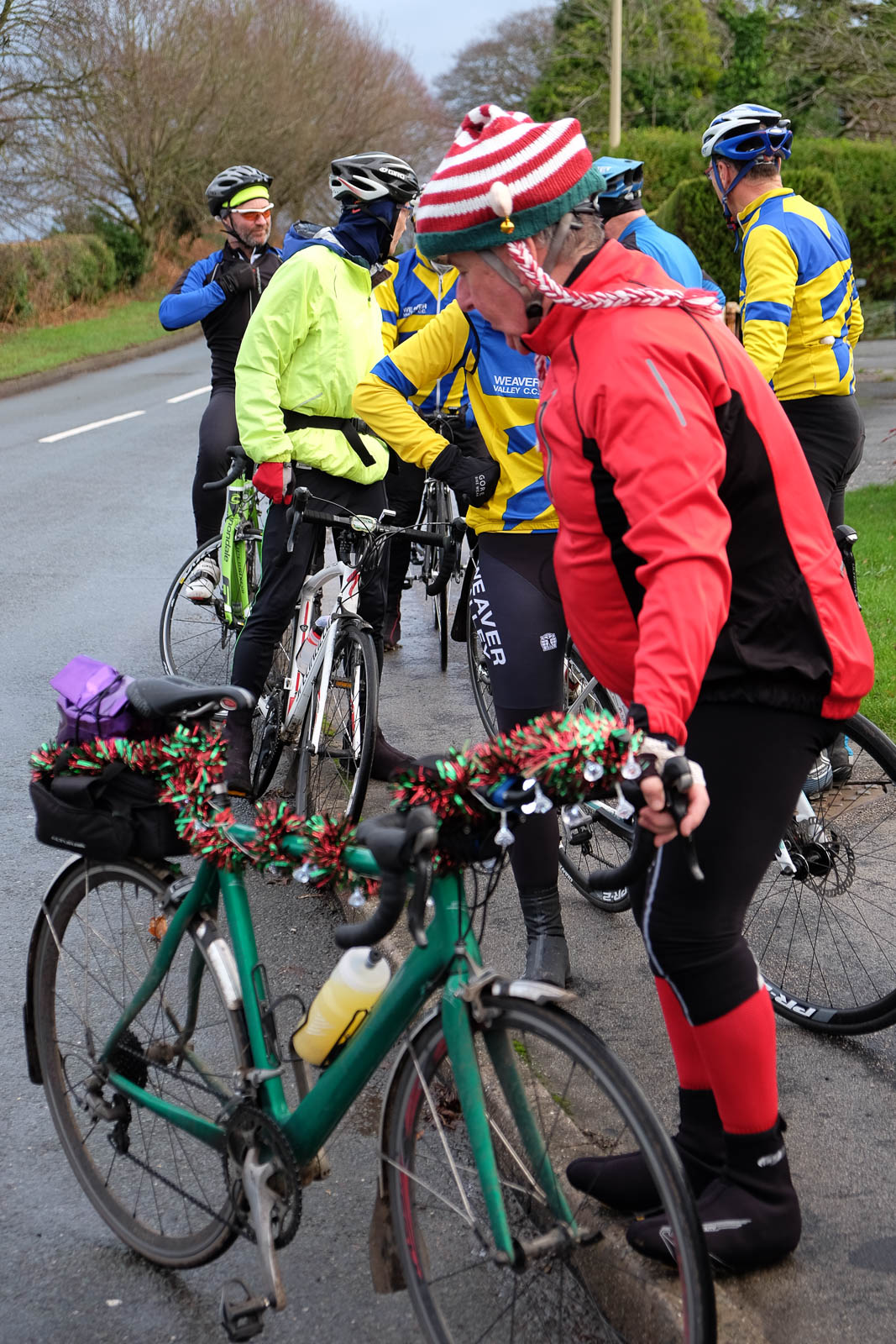 ..others were dressed.. errr.. well… in some alternative fashion…

It was a great turnout with over 30 of us setting off. An excellent meander followed through increasingly nicely lit lanes, with the sun making an appearance, and plenty of the usual light hearted chat. We chucked in a couple of loops, and landed at the Ice Cream Farm before 12.

We were greeted warmly, with reserved tables complete with Christmas crackers, and were served tea and coffee whilst others arrived separately. 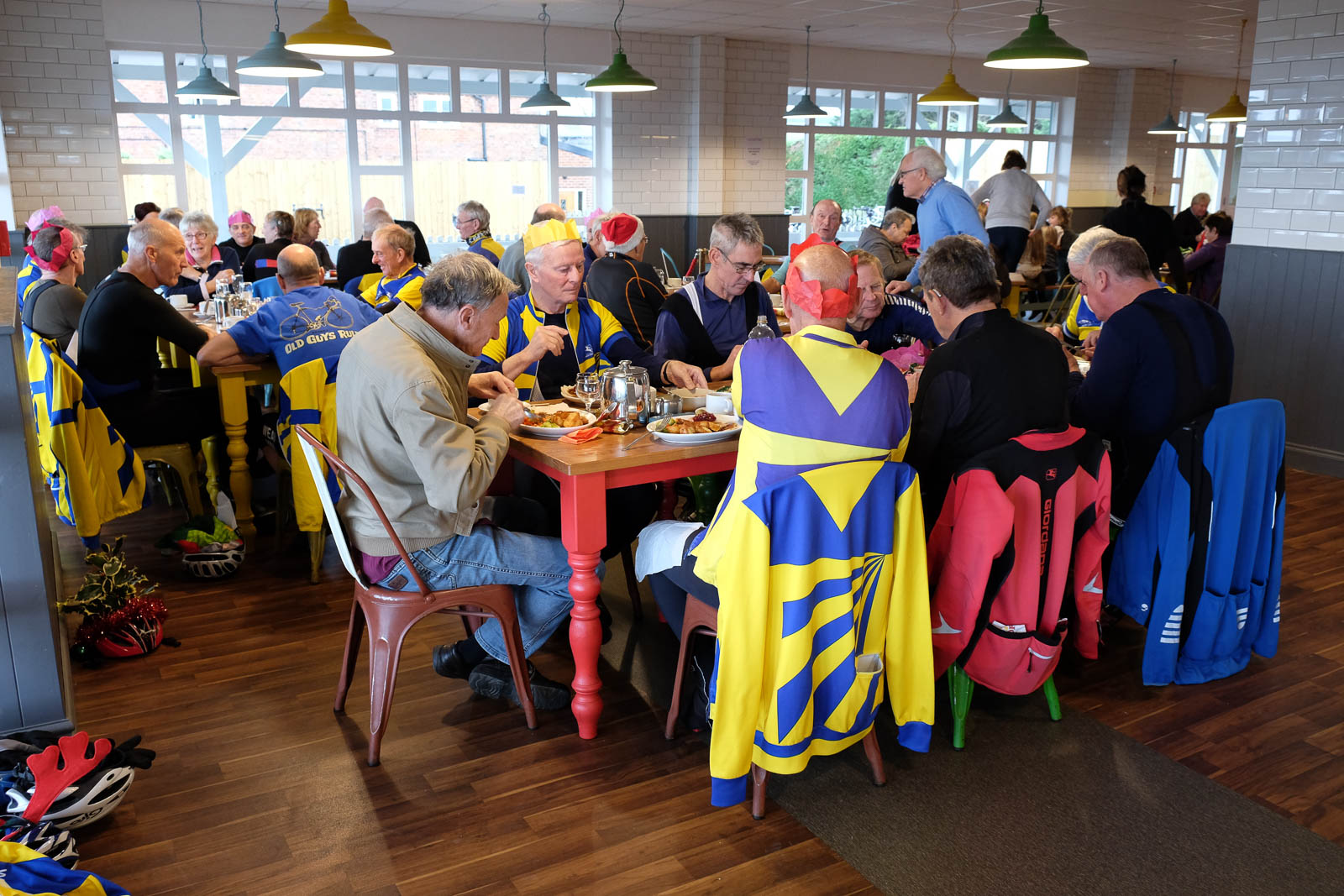 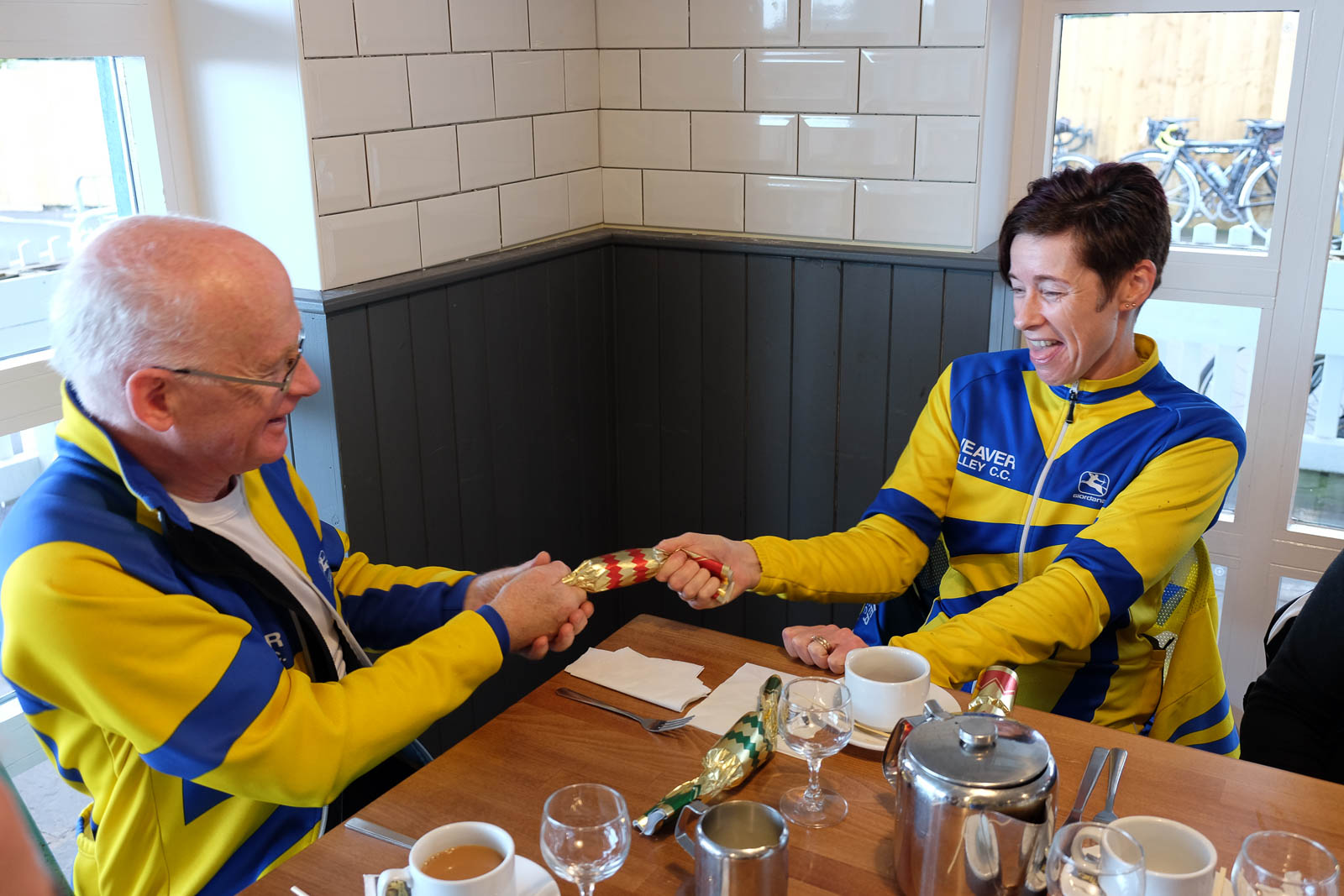 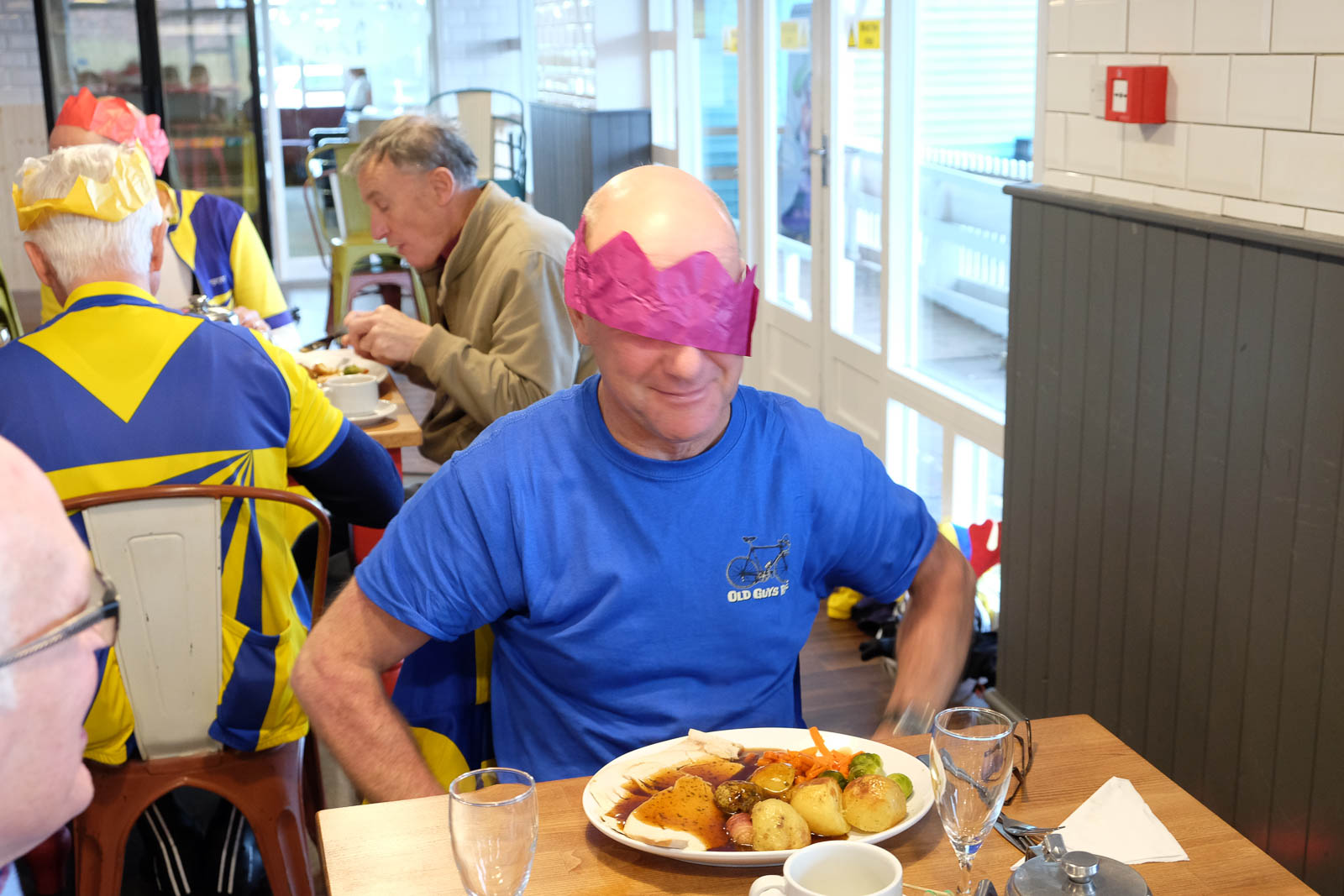 ..whilst Derek’s head was far too small.. 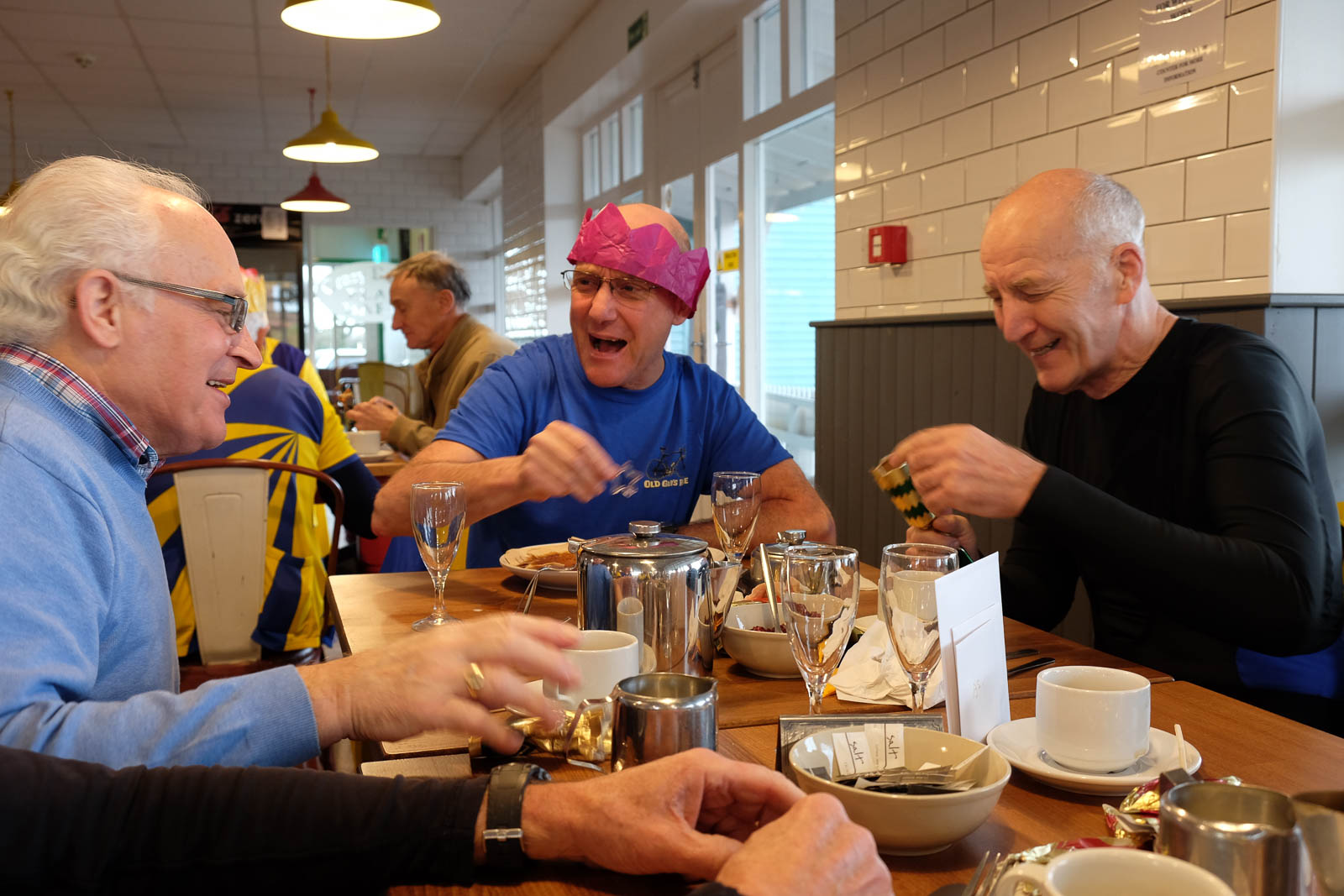 ..and it started to look like we were having a good time. Outrageous. 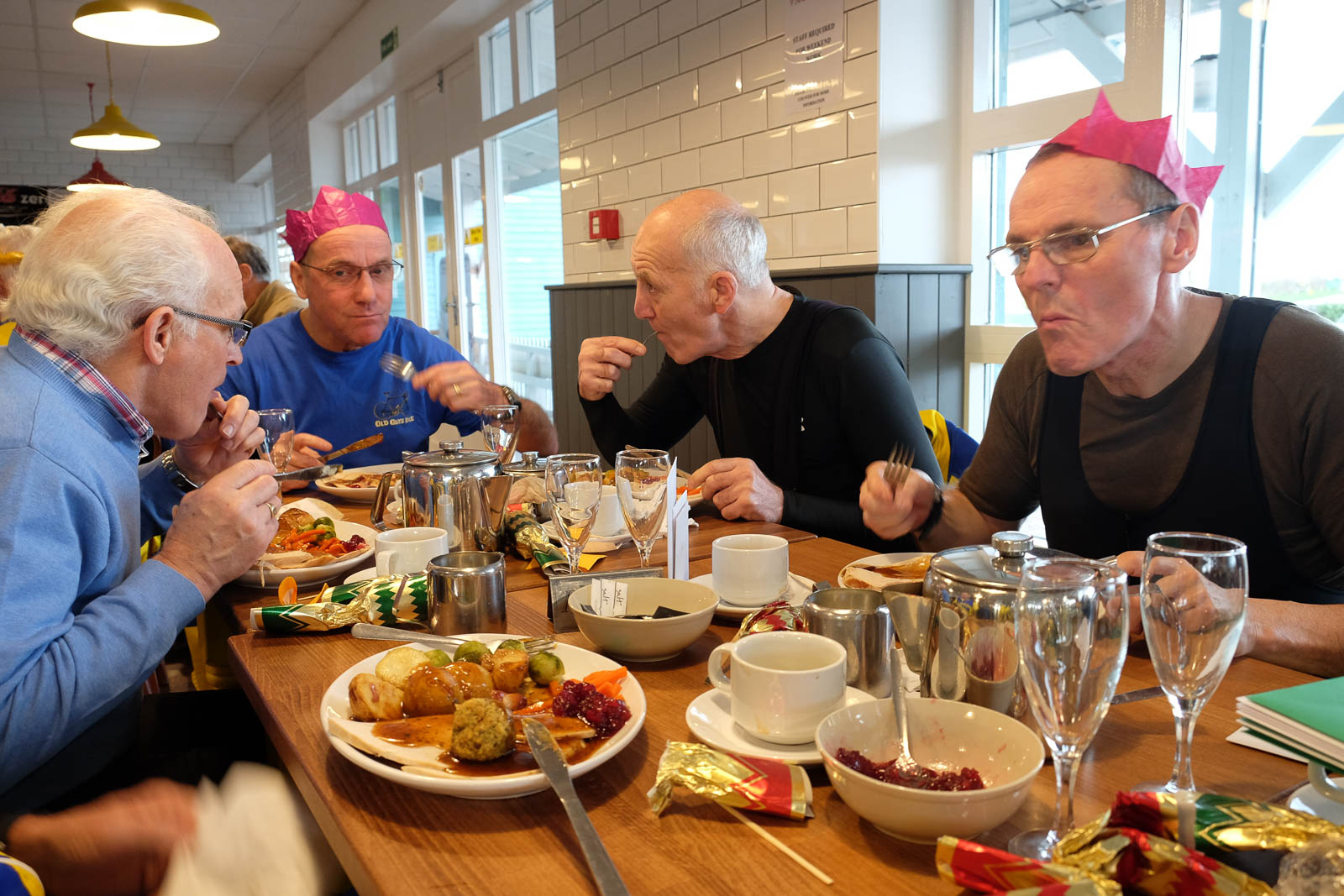 The food came, and that stopped the talking for a bit. 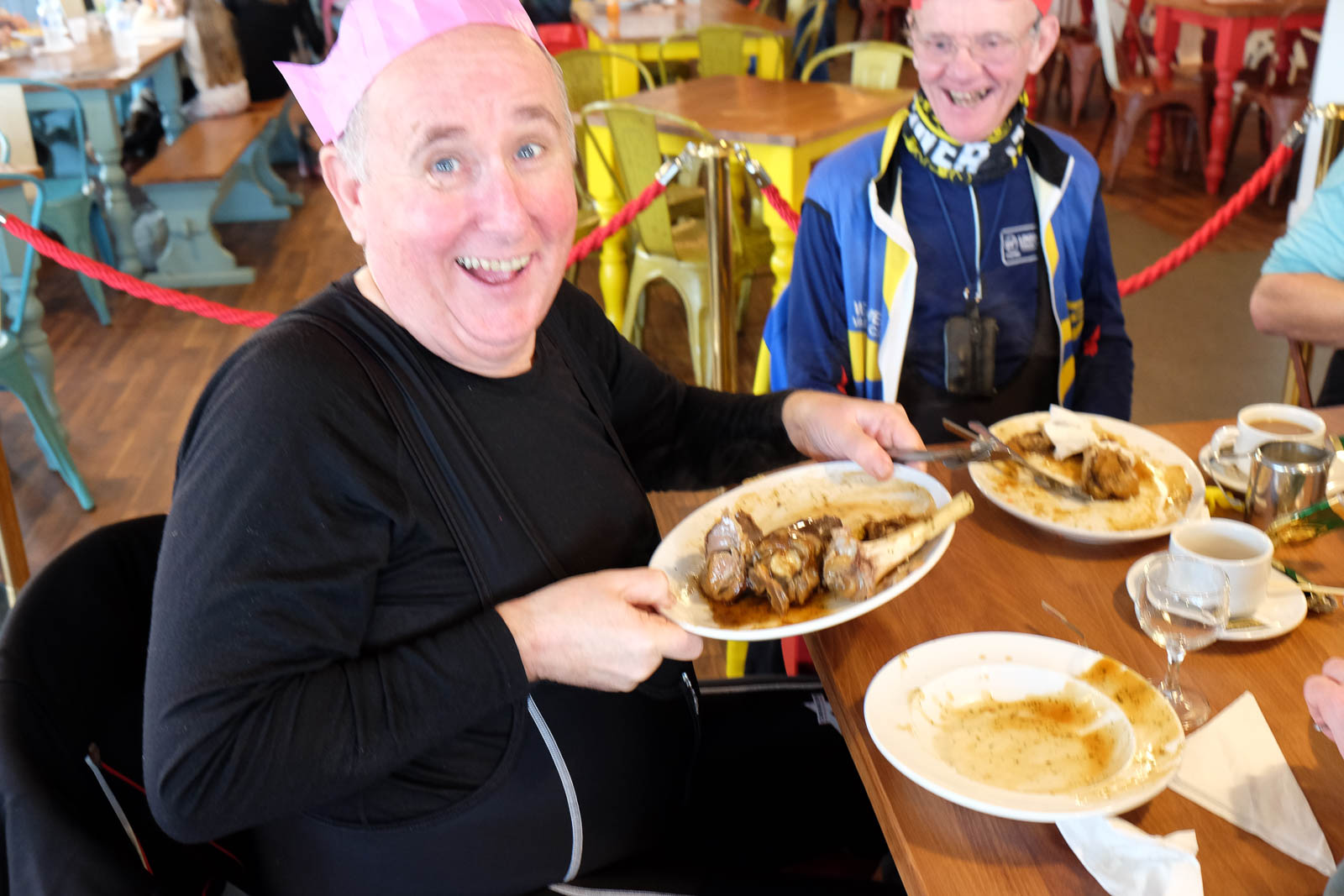 Jim was delighted with a vast portion of lamb shanks, and is probably protein loading for the 24 hour next year.

It was fine meal, and no sooner had we stuffed our faces with turkey and all the trimmings, Mel came over and said ‘Who’s for seconds?’. There was the briefest of pauses, and then hands went up with shouts of ‘yes please’ reverberating about the area.

The ladies kindly brought loads more turkey, spud, sprouts, and carrots, and we royally overfaced ourselves. Each of us wondered how the hell we’d actually pedal home.

Then, we had the Christmas Pudding. This was fantastic, and Al’s little face lit up when he saw it. 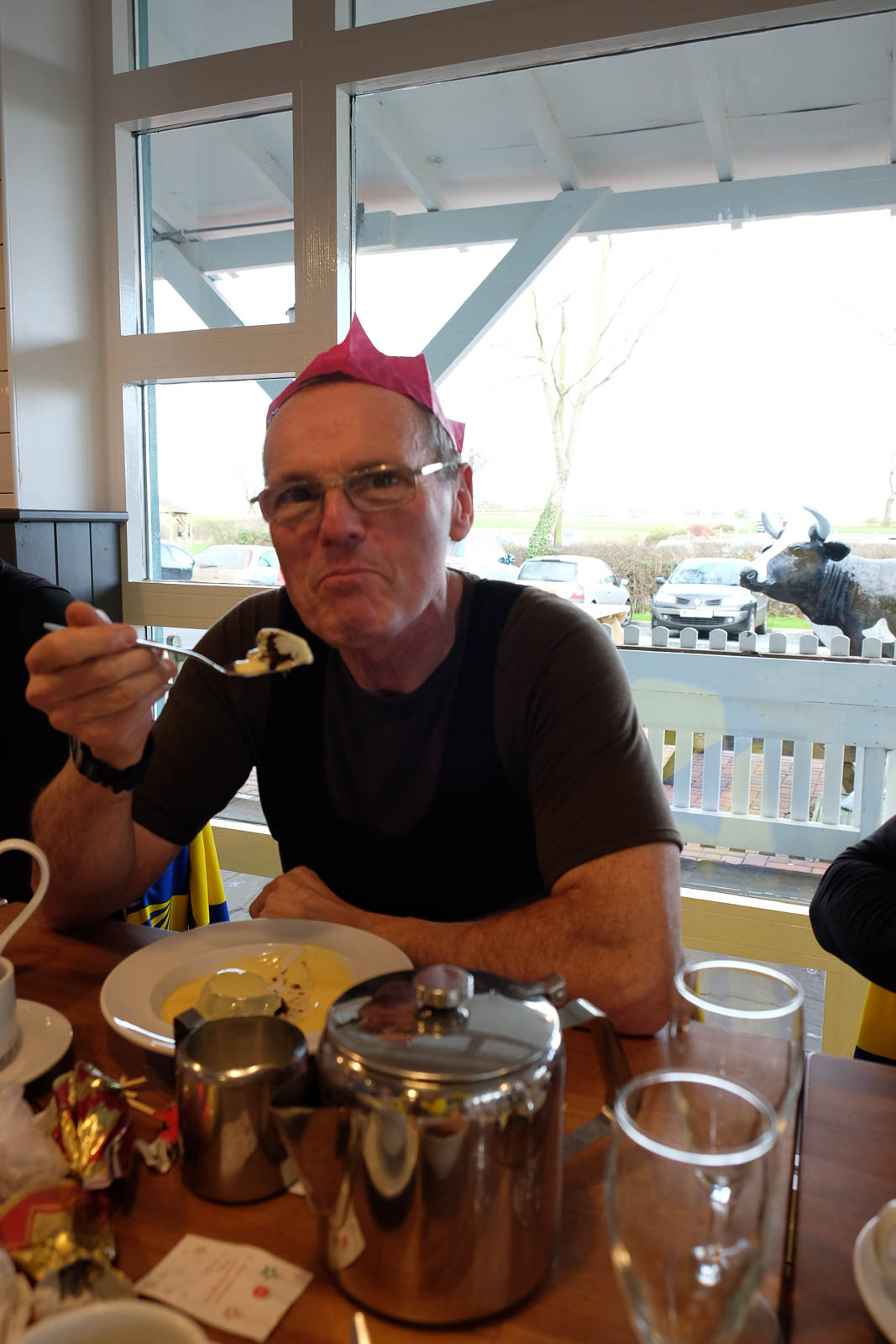 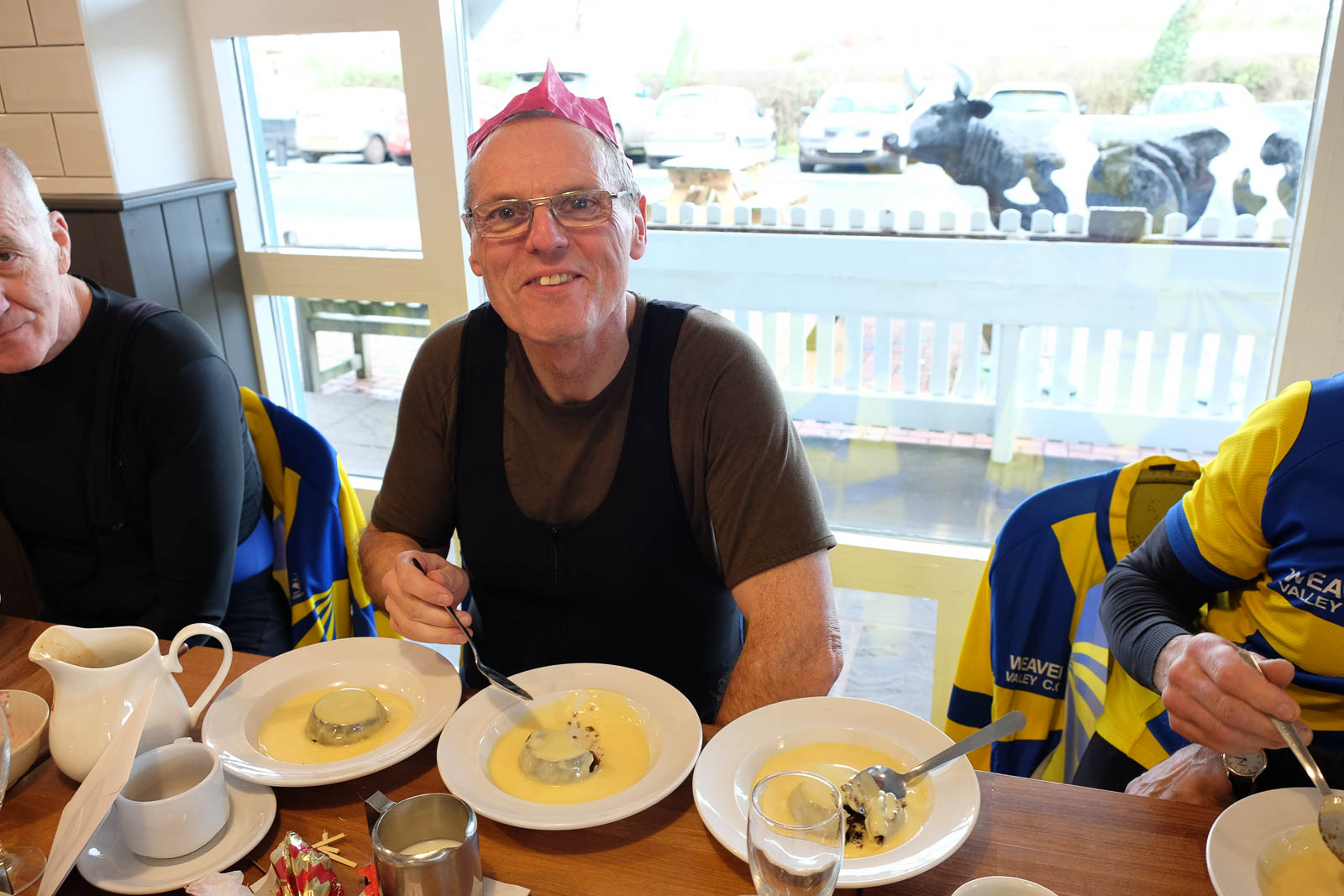 Al, doubly, and triply happy as an Al can be.

Actually, Al only had two helpings of Christmas pudding and custard, but then, just to test his mettle as king, Jim organised a further cheeky surprise.. 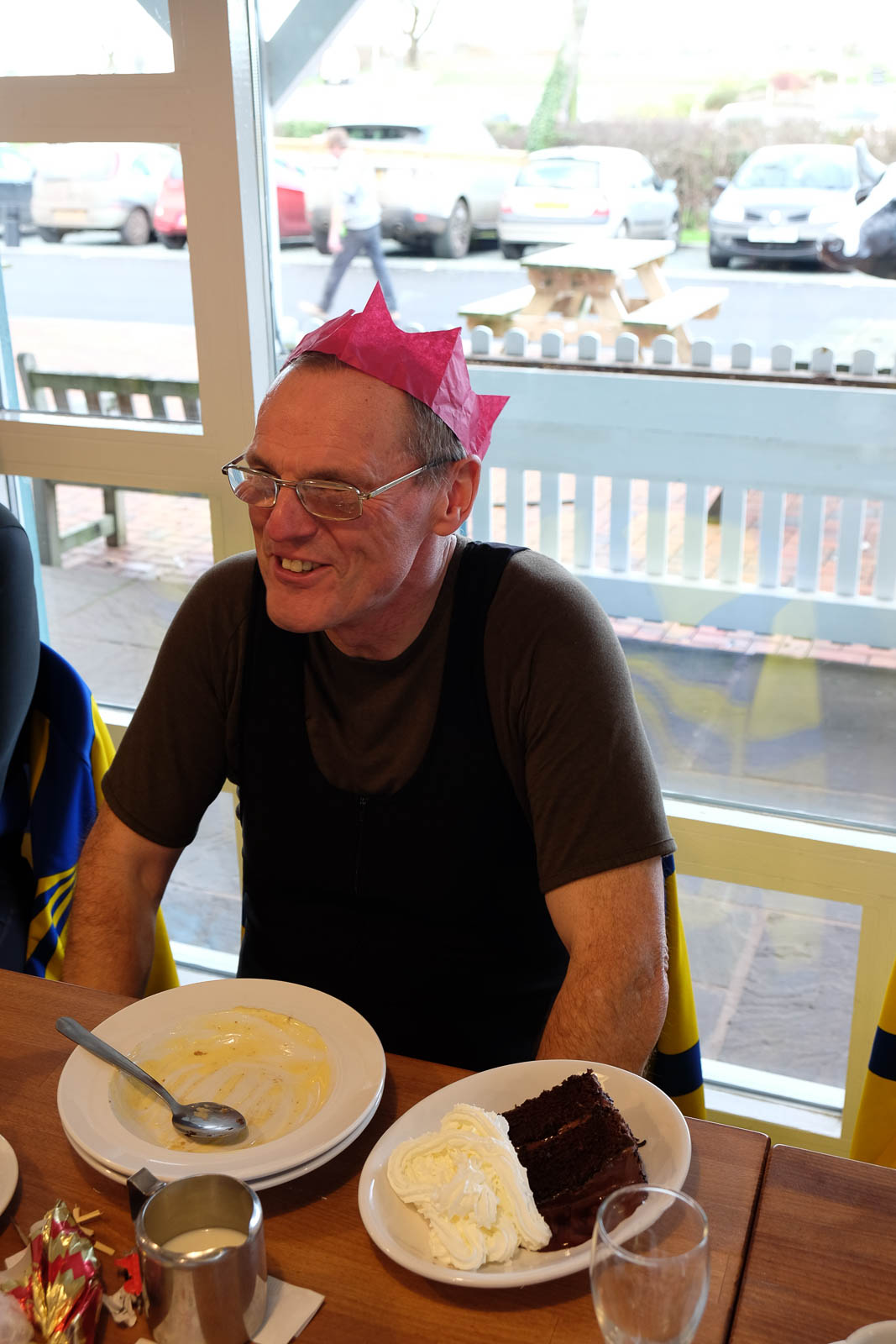 At first, Al looked as though he may have been beaten, but no. Sharing just a little  with Derek, who had opted for the same confection… 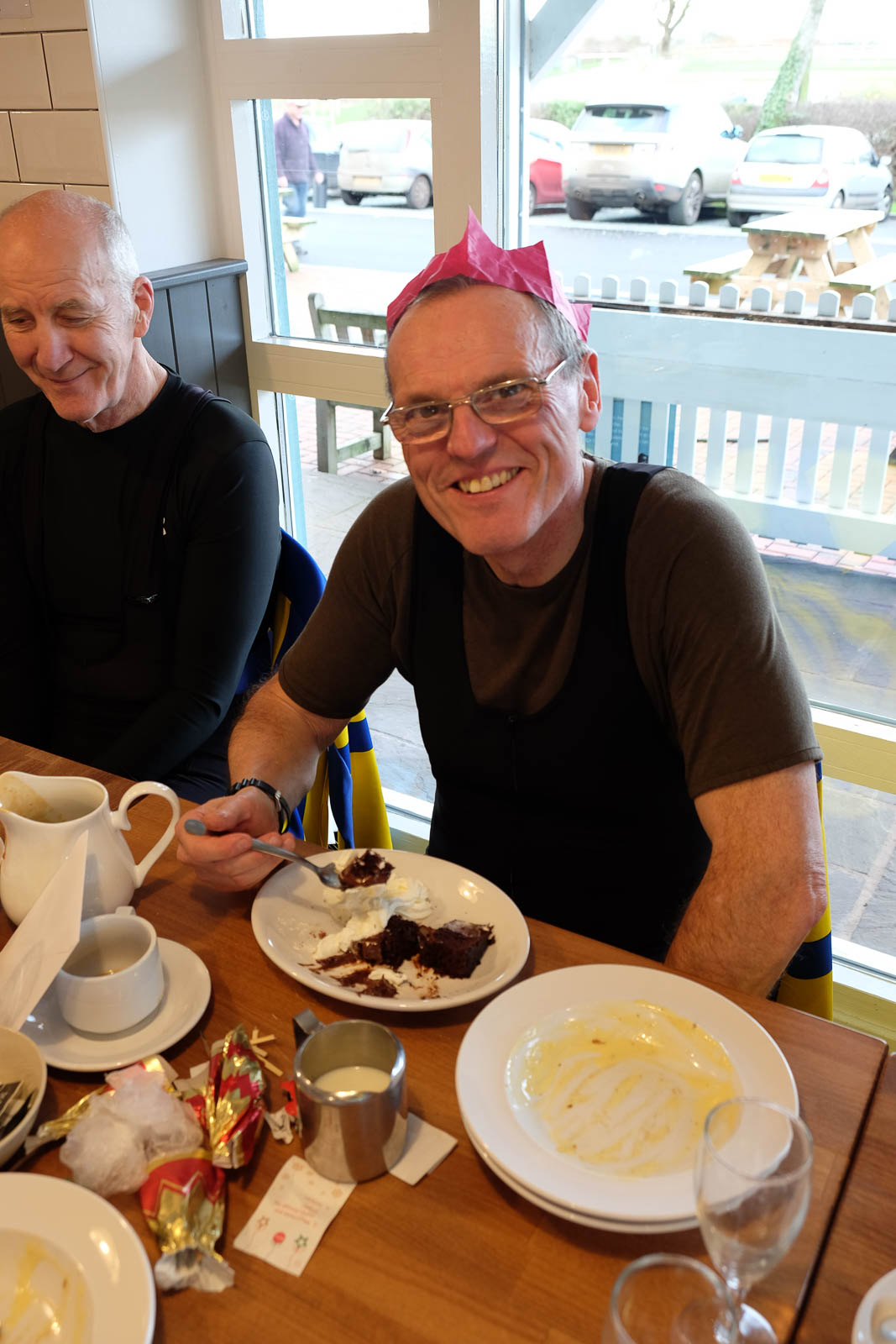 ..Al took the fight to the cake, and won. His crown remains, even if it is a pink one. Made of paper.

We thought that was it. Oh no, out came the mince pies, and we thought that this might kill off poor Al. This was not to be, for after sharing a few out, he almost took the lot. Evidence below, and he only got away with one that he stashed for later..

A great cafe stop thus ended. We struggled out but had a tail wind home (what could be better?). We pedalled out bloated bodies through the lanes in the afternoon December sunshine to complete the 2015 Wrinklies Christmas Dinner ride. Superb.

None of this would have happened of course if it wasn’t for Terry, who organised it again, so a big thanks to him for the day, and an equally huge thanks to Mel and the staff at the Ice Cream Farm (http://www.theicecreamfarm.co.uk/) who really looked after us and fed us and fed us, and then fed us some more! 🙂