When Alan Met the Birthday Girl

Yesterday’s ramble to Plassey was a curious affair, as we seemed to be going downhill for the larger part of the day. At the club several people were perhaps put off by the sighting of the rare and mythical Duffy. No need to fear people as the creature is (mostly) tame. Anyway Jim, Matt, Paul H, Alan, Steve, Geoff, Paul G and me headed off together towards the English/Welsh hinterland and the delights of the Plassey Holiday Park, Retail Village & Golf Course.

One of our party was under the impression it was November, having decided that Tempest jersey, gilet and overshoes were in order. Never mind, sweating 12 litres in a day adds to the challenge I suppose.

Jim and Geoff spent the larger part of the ride out on the front, keeping a steady pace and leading the way through Whitegate, Tarporley and towards Malpas, the rest of us in various combinations behind. Something dawned on me after a while; in the absence of Carol, Paul G had manfully stepped up to the plate, non-stop doesn’t come in to it, not as much as Carol obviously but enough to leave an impression on my ear drums many hours afterwards.

On this route there are only really 2 hills worth mentioning, near Bickerton, both long steady drags that saw the group splinter and then naturally come together on the tops.

At some point, still early in the morning, we saw Jules coming the other way going home, bearing in mind the early hour he obviously had got to Cleopatra’s the night before and had had a lock in.

After going through Bangor on Dee, Plassey was quickly upon us and as the weather had warmed up nicely we elected to sit outside and keep the wasps company. 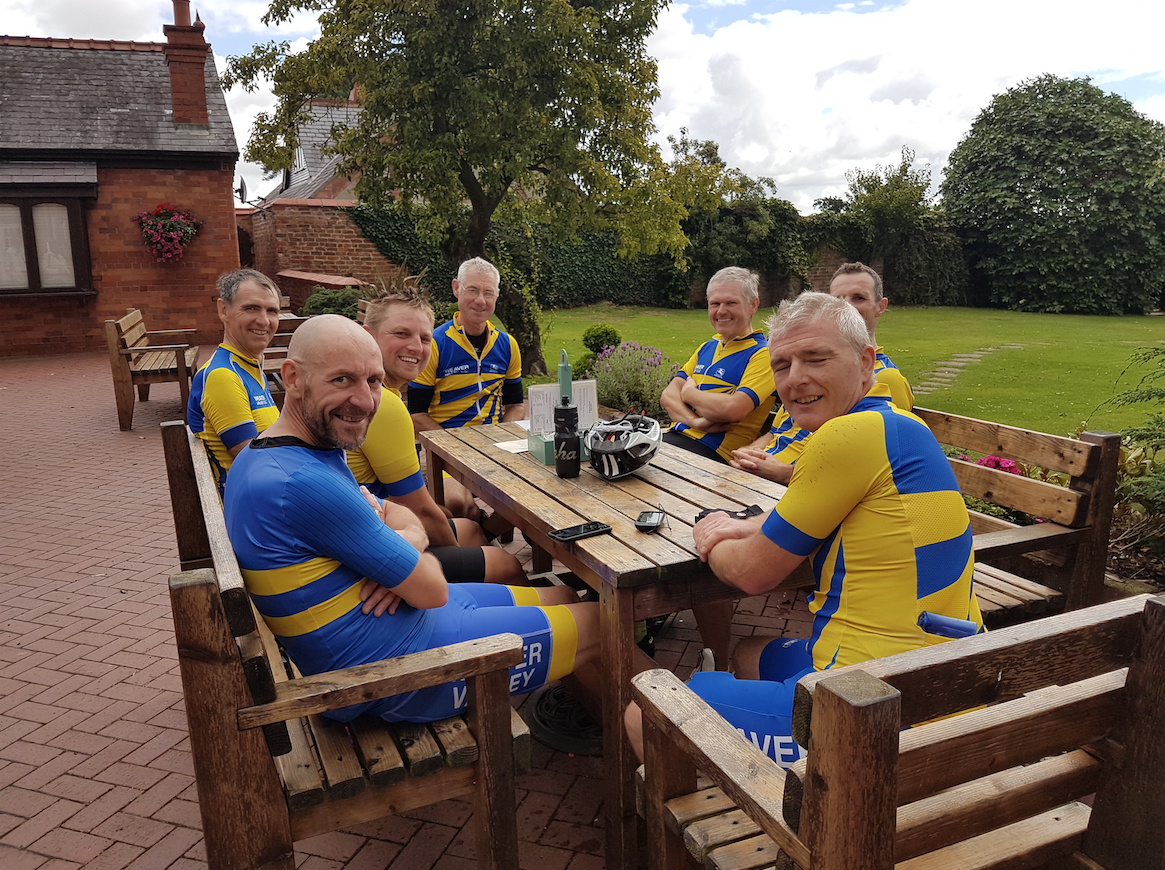 No beans on toast unfortunately but various sandwiches and toasties were ordered from our very nice waitress, it being her first day (and not her birthday) she probably thought we had been sent by the management to test her mettle, ‘if you can get through these guys kid, you can get through anything’. The young lady’s greatest challenge came from Alan though, him doing his best efforts to be Sally Albright. If you need a refresher on this please look here  https://www.youtube.com/watch?v=cnlm2e3EN78

Plassey welcomes all sorts, this little unicorn was waiting in the queue for some hay. 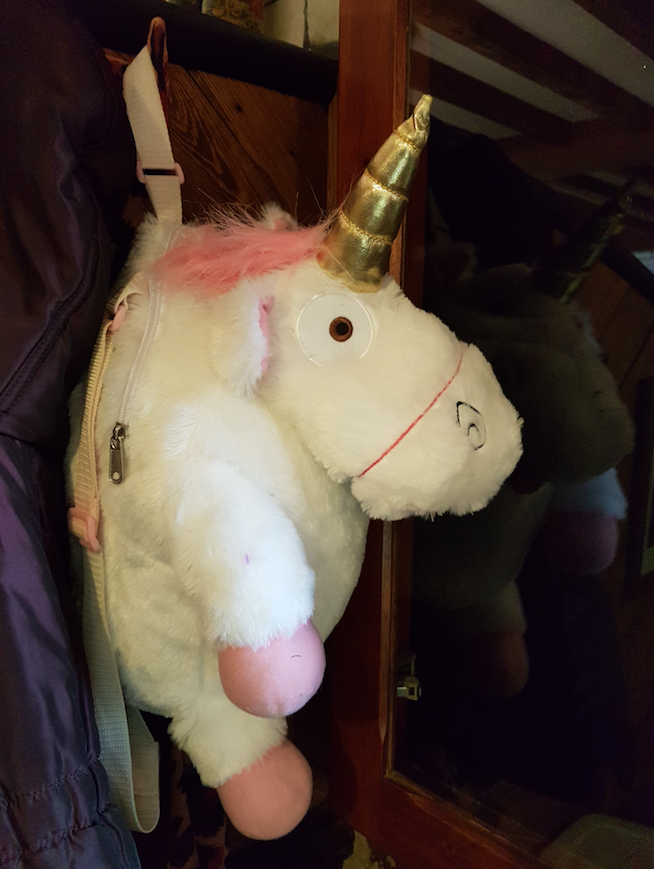 Lunch consumed and there seemed to be no takers for either Plassey’s retail village or it’s golf course and this being the case we set off for home into a mild headwind instead.

The route back carried on being mostly downhill and we took turns on the front, still trundling along at a pleasant pace. Holt, Saighton and Tarvin were all passed through without incident, conversation constantly ringing in the air (especially Paul G).

Jim not on the front. A rare sight and worth recording. 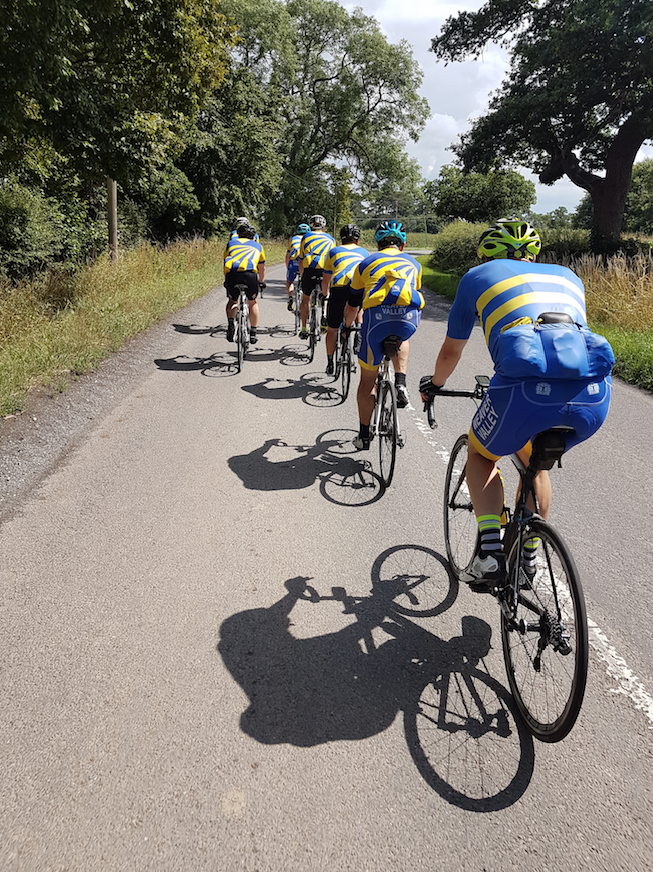 As is the norm, conversation died down on the run up to the forest, everyone quietly mustering themselves. As it was, just before the Delamere Ventoux Jim jumped us all and romped away, quickly disappearing from view. The rest of us were dragged through the forest by Mikel Landa, sorry Steve Malkin, until the sprint was started by Matt, he being just pipped on the line by me.

We reassembled at the Hatchmere crossroads before the final stint home, our route temporarily impeded by the closed road and the new estate they have put in place of the Ski yoghurt factory (you will have to have been local for a long time to get that).

Into Northwich and people started to go their separate ways as did I, returning home with just under 80 miles on the clock. In the same manner as last week we enjoyed a steady, pleasant ride, good chat and even the occasional decent road. Come and join us folks.