What a difference a few days makes in weather terms. As I rolled up at the club, I already felt overdressed with arm warmers on, so peeled them off at stuffed them into my saddlebag.

The clear and warm weather brought plenty out, and two runs were set on their respective journeys, with Paul navigating one run to Dagfields, and me with a nice ride to the Mills to sample excellent cake and to see the new installation – a telly to watch the Tour on!!

I’d thought it a good idea to stretch the legs on such a nice day, so headed off up towards Kingsley, then up Meeting House Lane, down Newton Hollow, then onto  Bushells Lane and New Pale Road, with some commanding views across the countryside.

We dropped down into Pingot/Sugar/Cob Hall Lane (with my newly fitted brake pads still noisily squealing their coating off on the descents – sorry people of Manley if I woke you up on this quiet Sunday morning!), then along Manley Lane to join our usual outward roads towards Mickle Trafford, where we again used a common route out towards the back of the zoo. As we ascended Chorlton Lane though, a shout went up, and we thought that it was a puncture. I unclipped, stood one foot down, went to unclip the second foot, didn’t quite unclip. Felt immediately tired, so had a very short lie down in the nettled verge.

Anyhow, it was a puncture, made by a wasp to Martin’s face. He was a bit concerned at this hymenoptera meeting (as were we all after some of us had witnessed Syd’s bad experience a couple of years ago where he had a bad reaction to such a sting), so decided that he needed to disappear off to a pharmacy for some antihistamine. Graham rode back with him, and we carried on. Then Matt had a real puncture, so we waited at the junction on the A41 whilst this was remedied, watching about a million sportive riders pass. His inner-tubes were of European origin, and obviously would no longer be valid in this country.

We headed out to the path near the railway track, so did a stop-start journey along as more sportive riders rode in the opposite direction.

Soon we were through Capenhurst and on the main road the warm up for the sprint started. Andy Woolley took an early jump and I held onto his wheel but couldn’t pass him  (in my defence, my Dawes Ultra Galaxy with large saddle bag ain’t that light to haul along in a sprint, but that’s just my excuse. More excuses to come later). He took the sprint with ease.

At the cafe, the usual was ordered, and a stunning bit of homemade cake that was a hit with quite a few of us.

As it was so warm and sunny, we sat out the back in the sun for a change t wait for our main courses (beans and toast and spare as per for me). Now, at the Mills, as with some other cafes, it’s a good idea to give your name to the girls behind the counter so that they know who the order is for. Ann is deadly efficient in prepping your food and then the food is handed to the girls to serve, with a name given for the intended recipient.

Graham and Martin appeared, Martin all drugged up on antihistamines and demanding a seat. We obliged of course.

One set of beans on toast came out, served, then the next. Must be mine. No. Said waitress dutifully walked around the table to Henrietta, to serve her beans on toast. ‘I didn’t order beans on toast’ Henrietta said. To which the confused girl replied, ‘Ann said it was for a lady’. Can you see where this is going? ‘Lady, ah, I think you mean Ady!’ I piped up. I think she thought I was winding her up, but we cut through the confusion, and I got my beans on toast, and about half an hour of mickey taking for the confusion. 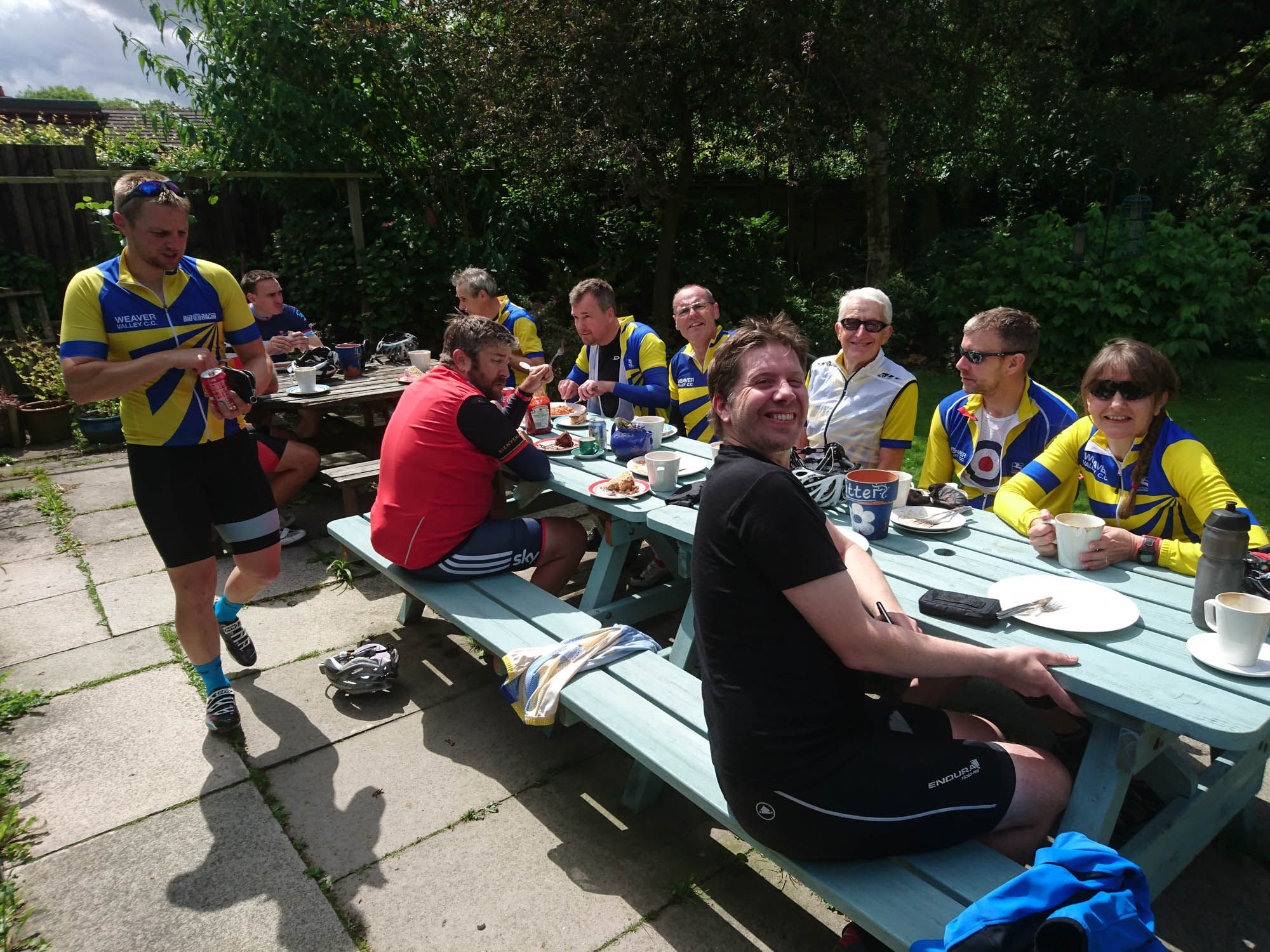 There is only one lady in this picture. The person behind the camera phone is not a lady. Matt is  walking back, deep in thought trying to think of excuses for not winning a sprint.

Lawrence got a second coffee, and ‘two-minutes’ was shouted. Shortly after, we assembled ourselves and left.

Taking advantage of a tail wind, we headed down to the end of the Greenway and down to the Dee, and had a brisk pedal to Saltney Ferry Bridge, then up through Blacon and back onto the Greenway. Graham had previously switched back over the bridge, so we didn’t expect to see him, until we did, with the 2nd (or 3rd if you count the apocrita encounter) puncture of the day. A very tight tyre brought out the Var Tyre Tool (a well deserving plug of a great little tyre lever tool to carry around), and we eventually replaced the inner tube.

On our way again, we took the usual return route and onto the Delamere sprint. There was some enthusiasm for the ‘sprint game’ that I have conducted in the past, where all riders sit behind me until I drop the flag, a départ fictif and a départ réel if you like (maybe I can get a couple of spare flags from Mr Prudhomme?). Anyway, the flag was dropped and Andy Woolley wnet off like a Cav looking for a yellow, and grabbed his second sprint of the day, with Al battering it for a close second. Lawrence brought home 3rd, and Matt made excuses about walking up Snowdon the day before.

On to home, and a very pleasant and warm day out on the bike.