To Holt and back

Well here we all are – gathered outside Holt Garden Centre about to start our return ride.  The large group who met at the Legion at 10 am soon split into three smaller groups – this photo (below) is of the direct/steady group which included (here goes) Kev, Alan S, Graham G, Terry, Dave D, Jim, Phil, Rob, Andrew, me (obviously), Greg, and  a few newish riders whose names I’m struggling with even after they told me who they were –  two Neils, Steve, Pete, Andy, Colin, and apologies to anyone else I’ve forgotten.  One whom I certainly HAVE remembered is 13 year old Charlotte who did brilliantly and who looks very promising – yet more female riding talent for the club, hoorah!! There’s not much to say about this ride other than we kept together really well – the pace was steady but certainly not slow – poor Charlotte had two punctures one immediately after the other having hit a crater in the road – and the weather was just gorgeous and it felt like spring.  Oh yes – and Graham won the sprint to the cafe.  I’ll now hand over to Kev…Well I’ve cancelled my flight to Majorca and booked in to a Buddist Temple for a week.  Having thought I had suffered my last ignominious defeat by the wiley, wheel sucking, crafty old fart (you may have guessed I had some issues with my defeat) I had to endure the pain of seeing Graham go past me in the final 10m.  I want him drug tested and can’t believe we have all fallen for his tale of heart problems, lack of training and multiple hospital visits, he’s obviously been on a training camp with Mark Cavendish.  Oh and Eleanor says I have to say well done – the better man won. 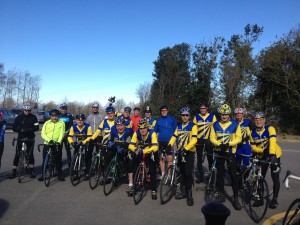