Well as you can see from the photo (for which thanks – or in my case no thanks! – to John Keen) – Carol was out for a gentle cruise, whilst I was doing some serious suffering – funny that, given that we were both riding in the same race!

It was a clear dry evening – but because of the failing light we “only” rode 5 laps.  Carol and I (the only two women out of 70 cyclists) were put in the “old blokes” race – which is probably the fastest of the lot, given that Alan Kemp is in it!  Alan dictated the pace with several attempts to get off the front – with each attempt, the bunch upped the pace to catch him, and the rest of us (apart from Carol who was singing to herself) found ourselves breathing through our ears to keep up – then as we caught Alan, the pace would subside, and we’d all catch our breath, ready for the next effort.   Finally after three and a half laps, Alan made the decisive break with a couple of others, everyone else sat up and let them go, and an unspoken truce was declared in the bunch – until the last straight, when a bit of “cat and mouse” preceded an all out sprint, with one or two unhinged riders opting to ride on the wrong side of the road, in gathering darkness, into the path of an oncoming car with lights ablaze.  Somehow everybody stayed safe.  Alan’s was a very well deserved victory.  For Carol and me, it was an amazing experience: the exhilaration of riding so fast in the bunch – coping with the constant surges – the ebb and flow of riders moving from the front of the bunch to the back and vice versa – accelerating out of corners in our big ring – the need to maintain concentration and not lose the wheel in front – the release of adrenalin after all the pre-race nerves – the noise at the Yellow Broom corner, where Carol’s fan club had established themselves (like Dutch corner on Alpe d’Huez!) – the relief at finishing, and not getting dropped – and our pride at having ridden 27 miles at an average speed of 23.7mph.

WVCC were well represented amongst the ranks of the organisers, marshals and spectators – and had several riders out – Kris and Jon Conboy finished safely in the bunch in their races – Jules and Andy Newby apparently had an interesting time finding themselves off the back of the bunch at the Yellow Broom, but somehow managed to bridge the gap back to the bunch by the time they got to to the pub at Lower Withington, and Jules ended up coming 4th – and Kev did really well, working with Jon Conboy and others to bring back one break, then riding off the front with two others in the finishing straight, only to be pipped to the post by half a wheel, and finishing in second place. 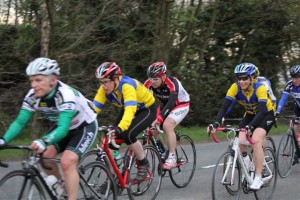