Tigger and the Steam Train

Saturday morning saw a damp 12 degrees but as the day went on it warmed up and dried out to become a very pleasant, low wind, autumnal day.

The crossroads at Hatchmere were positively busy as Jim D, Spanish Jed, Keith, Kevan, Eleanor, Jimmy, Ewart, Alex, Ben, Steve, Paddy and Me assembled in varying degrees of eagerness. There were several new winter bikes in evidence, gleaming and just too shiny for their own good. They need a wet, muddy day to get them looking the part. Jimmy had already declared that it would not be a hard day today and true to his word we set off at a sedate pace through the forest with much chattering from the group as legs warmed up. The pace was obviously too steady for Tigger, sorry Keith, as every time there was any incline he would pop off the front of the group, soon being absorbed and drifting to the back only to pop out the front on the next sign of a rise in the road. Have to make the most of those £600 carbon fibre dust-caps somehow. 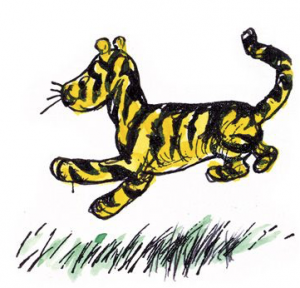 Tigger’s bouncing aside, the rest of the group meandered along at such a pace that my heart rate was at times below 100 bpm. After an hour and a half of ambling thus, Jim Duffy came along side to say he would like to go a bit quicker. I thought this was a good idea so we said bye-bye to the rest of the group along with Keith and Jed in order to go a couple of miles an hour faster. Little did we know that, as we got down the road, there had been some attacks to bridge over, I think from Kev and Jimmy. The junction was made to our little group and Tigger bounced off the front with Steam-train Jim again, a gap appeared, Tigger bounced backwards and Kev and Jed dragged me and Tigger up to Holt where we eventually caught The Mallard.

Kev sat up at this point, to wait for the others. I later learnt that the main group decided to go to Cleopatra’s and from there back home in various ways.

Meanwhile, holding on to the caboose of the Flying Scotsman were me, Keith and Jed. The train had removed his armwarmers so was now in shorts and short sleeve top and we were being pulled along at anywhere between 23 and 27 mph. There was a brief pause as we saw Nigel coming the other way, he turned around and latched on to the back twiddling a little fixed gear. I think Nigel’s carriage came unhitched quite quickly and then after a while Keith shouted, ‘We’ve lost Jed’. This happened on a little rise and The Bullet briefly became a baddy from Scooby Doo, stamping on the pedals even harder in an effort to despatch more of us. I could almost hear the spooky cackle. 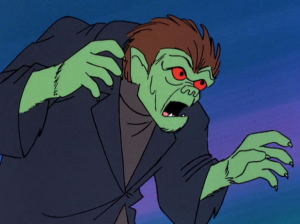 Tigger was unbounced shortly after only to make contact again as some signals (sorry, traffic lights) slowed Thomas the Tank Engine momentarily. Then we were on to the path by the river. I thought I would show my hand so came to the front doing around 26mph, Stephenson’s Rocket wasn’t happy with this and quickly resumed his place on the front. Tigger made a brief effort but couldn’t keep it going and the Hogwart’s Express again got on the front.

Going through one of the zig-zag gates Tigger bounced badly and ended up on the deck, his pride hurt more than anything. The Orient Express punctured, we repaired this as quickly as we could, worrying that the main group would catch us up, as it was, Nigel and Jed did. Puncture repaired we set off for 2 Mills, the sprint inevitably won by the Amtrak.

Kevin Campbell, out for a solo ride arrived at 2 Mills as we were eating. 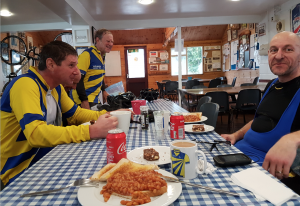 After beans on toast for some of us and coal for one of us we set off for home the usual way, meeting Stuart Ward just as we left the cafe. The ride home was at a steady but still pretty quick pace.

An excellent, hard training ride, thanks to Jim for making it so. Incidentally, if i am  that Tiggerish when i reach 71 i will be delighted. See you all again soon.