… one of my wife’s more prophetic quotes.  To be honest I was surprised she had got this far, and this far was only 20 minutes from the start!  My early morning attempts at bravado had fallen on very suspicious ears.  ‘The weather looks fine, we can’t let Derek down, we won’t melt etc etc’ was met with ‘I don’t go out on my road bike in the rain.’  Still she succumbed to the promise of ‘we’ll just go to the start to show willing’.  I had been amazed to see 11 people drinking tea and preparing to set off and even more amazed when Eleanor joined in, as Derek cunningly appealed to the racers in us all, by suddenly announcing ‘guys you better set off the clock is ticking’.  Everyone fell for his rouse and rushed to their bikes.  However, slowly over the next few hours (or in El’s case minutes) the hardy 13 were whittled down.

I ended up in a group of four with Kev C, Titch and Matthew, doing his best Dave Fearon impression on a fixed, flying along chatting away.  Titch decided on the wisdom of youth over age and didn’t put his waterproof on despite numerous entreaties to do so.  “I’ll be fine” he said as he disappeared again, attacking up the latest hill.  The weather was atrocious but all went fine till Titch fell off his bike with hypothermia.  We stopped for a while to revive him and noticed that the we had already missed two information checks, we all agreed that reading the detailed instructions before we set off would have been a good idea.  Still onwards to Eureka and the warmth of tea and beans on toast.   We were met by Dennis who was checking everyone in.  Gradually, Nick B, Craig, Steve, Alan S and Jim arrived (well those are the ones I remember in my semi hypothermic state).  We wrung out our no-expense-spared waterproof gloves but could not prise Titch off the radiator so set off for Holt – then there were three: 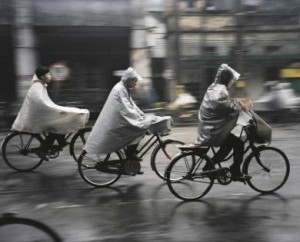 The hardy trio setting off from Eureka

To be honest the rest of the ride was a truimph of human nature over the elements, it is almost impossible to follow a Garmin with glasses that are covered in rain and a screen that is likewise obscured.  I was not helped by the fact that every time I tried to wipe it the bloody touch screen changed scale and mode.  Well that’s my excuse for the minor four mile detour around Higher Kinnerton!  My two compatriots stayed remarkably calm but I did notice that after walking across the busy dual carriageway they both set off like a train in an attempt to drop me.  Matthew especially decided that the best way to warm up was to change his Dave F impression to one of Cancellara – sod!

Into the Holt garden centre for the usual warm welcome, the highlight of which was the girl who arrived to mop up under our feet whilst we were still finishing off our coffee.  Then home, via the war memorial to collect our only ‘information control’ of the day – a Latin quote, well one out of five isn’t that bad.  Back to the centre where Titch was sitting on the radiator having been guided back by Alan S via a Duke of Edinburgh transit, Delamere Forest cafe and Dennis’ van – I suspect this was an epic he will remember for some time.  Craig and Steve arrived soon afterwards looking just as tired and wet but with a self satisfied glow.  Thanks Derek – I haven’t had so much fun since my dog died.