The great bacon adventure of 2018

30 September 2018 Written by johnk
Edmund Hillary, Ferdinand Magellan, Scott, Shackleton, all great adventurers, all lovers of a bacon sandwich. Add Keen to that list. For today’s inspirational, Boy’s Own style adventure was lead by none other than the great fool himself. It must be said that it was entirely by default as no one else wanted to be lumbered with the responsibility.
At the club this morning and volunteering for the long and nearly flat run to the Mills were Mr Longley, Mr Mullett, Mr Gavin, Mr Underhill, Mr Goldstraw, Mr Booth, Mr Pugh, Ms Martin, Mrs Robson, Mr Brummie Rob, Mr Lee and Me. After some discussion no decision on a route was arrived at, no matter, I was in charge and my trusty team were right at my side (actually 2 abreast in an orderly fashion as 12 of us across the road would have caused real chaos).
First stop was a quick visit to Jules’ house for a cup of tea and a bacon sandwich, unfortunately neither were forthcoming, there was no room at the inn mostly because someone was still in bed, too hungover from last night’s food and drink. We did try to get him up but to no avail, our knocking went unanswered. We moved on swiftly for fear of having a bucket of water thrown over us, quickly slowing down again to await Mr Lee fettling his velocipede.
Up to Cuddington passing Mr Gavin’s country estate (again no offer of a bacon sandwich) and thence through Delamere Park and towards Frodsham. Up the Mersey View we flew, some of us with more effective wings than others, regrouping at the top before plunging downwards to the sharp right turn towards Alvanley. I was on the front with Mr Pugh for quite a lot of the time and I think he, along with Mr Gavin must surely be strongly in the running for the ‘Half-Wheeler of the Year’ award. Moving on, we headed for Dunham on the Hill and Ashton, it was at this point that I thought I heard someone shout, ‘Woody!’, but no, it turned out to be just wishful thinking, eluded again.
So we arrived at Ashton, a place we could have got to an hour and a half beforehand but what would have been the adventure in that? From this point the usual roads took us without drama or mishap to Holt, the only point of note being Mr Lee peeling off to go home and see if he could get a rustier chain for his museum exhibit.
As we went in to Holt my thoughts naturally turned to bacon sandwiches but at no point did anyone offer to buy some and so we just rode through the village on the usual route to 2 Mills. Mr Underhill was kind enough to give me half his banana. At a certain junction I thought I would try my hand and my gamble worked, no one noticed and so we were into the wind and on the road to Higher Kinnerton. A right turn at the Royal Oak (an excellent bacon baguette I am lead to believe) and up the draggy climb to the junction at the top where we turned right towards Chester. It was here I was going to then take a left and do a little more climbing but decided ‘The Chester Mutiny’ would not be a good title for a blog so thought the better of it. Here also Mr Underhill came along side to say what a splendid job I was doing by including the previous, pointless 10 miles. I think that is what is he said any way, the wind was strong and all I could make out were words that began with a B. I reckon he was telling me I was doing a ‘Blinking brilliant job’.
Swinging off the main road we headed for the river and it’s headwind delights. I noticed Mr Underhill’s extremely loud bottom bracket and a halt was called to proceedings while investigations took place. It turns out the left crank was as close to being off as it possibly could be without actually being back in a bike shop. Luckily a suitable Allen key was to hand and the crank quickly sorted. This small interlude was enough for a breakaway contingent to already be up the highway lead by the 2 half wheelers and so the chase was on. I contributed not a jot to it but Mr Underhill and Ms Martin did a sterling job.
Re-grouping towards the end of the river path we rode along the fairly quiet cycle path, the autumn leaves not yet presenting a hazard.
Mr Brummie Rob was the first to make a move on the run in to the cafe, Mr Pugh chased and things got a little strung out. My legs were having none of it and I was very pleased to have Mrs Robson’s sympathetic company.
Beans on toast, tea, a mars bar, Fanta, chocolate and banana cake, another mars bar, some expensive energy sweets, another mars bar and some chocolate flapjack were all I could manage at the cafe. I put a mars in my pocket for the journey home just to be sure. At no point was I offered a bacon sandwich. 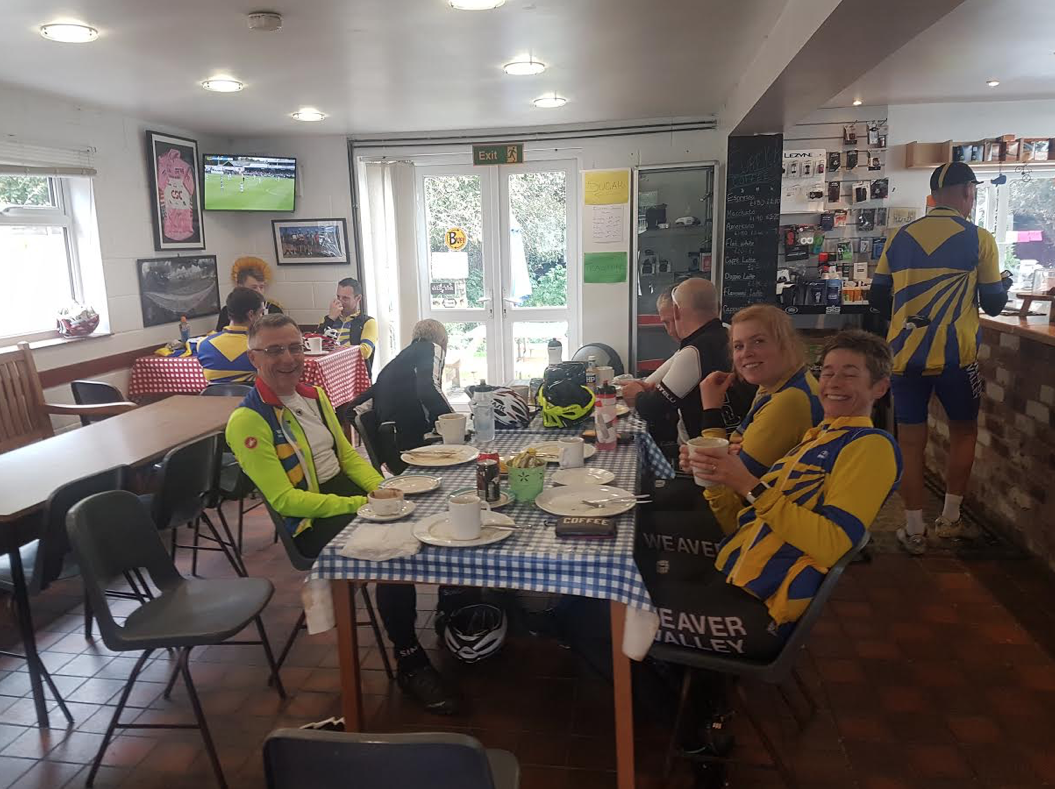 After much chatter of this and that it was, all too soon, time to depart. I bid adieu to our fair hostesses, wistfully looking at the pile of uncooked bacon and un-spread sliced white. Wind proof top and gloves were donned for the first 10 chilly minutes towards Cheshire Oaks and it was here that Mr Longley stretched his legs off the front, this was something of a surprise as his behaviour up to that juncture had lead me to believe he did not know where the front of the group was. No matter, he was away, quickly followed by Mr Pugh, the 2 of them spinning in to the distance, the benefit of fresh legs taking them away, never to be seen again.
As for the rest of us, the end of our adventure was nearing and mostly tailwind assisted so that was good. We took the usual route back from the Mills with no one heeding my request for a detour from the normal route, never mind, as the forest approached, my legs, their many pleas for a bacon sandwich ignored, went on strike. Emily was good enough to stay with me and regale me with a tune from the current hit parade, something about a baby shark. 6 hours later it is still going around my head. (!)
Mr Underhill won the sprint in the forest, I am not able to give you a deeper report than this due to not being present at the event.
Re-grouping at Hatchmere we rode steadily towards Northwich with individuals turning off here and there until I was alone again, naturally.  Through Northwich and Wincham, the house beckoning, eagerly I entered only to find all the bacon gone and not a slice of bread to be had.
90 miles, a few thousand feet of climbing, a cold nicely established, a headache, complete hunger knock and a first class day out with some wonderful chums.
Road Runs
WVCC Open Hill Climb 2018
Wanted – an event organiser! WVCC Open 25 mile TT 06/07/2019