The familiar unfamiliar, big cakes, live ammo and a boardwalk.

It was a cooler than expected start to the day as I left home for the club. I left my arm warmers on and did a few miles of spinning to get the legs warm. Fortunately, as I neared the club, glimmers of blue sky did appear in the distance, although the wind kept things a little cooler, and much cooler if the sun dipped behind the clouds.

A healthy number turned up today, and Jim took a select few off the gain some big miles in the Peaks. We were joined by Glynn, up from Clevedon DRC near Bristol visiting, who wanted to join us for the day, and we were of course more than happy for him to ride with us and see what a superb club we are. 🙂

I had other ideas, and thought that we might be best heading for the coast, well nearly the coast.

We set off at a steady pace and kept a well drilled but large group of well over 20 together as we climbed up to Delamere, and through Ashton Hayes. Through Mickle Trafford, I had already decided to keep (mainly) to the road, and we headed towards Chester Zoo via the lanes, then over the A41. Not long after we had to stop, as the call of nature was too much for some. This caused a chain reaction of weak bladders amongst the bunch, and many stopped to look for discrete hedges out of public view etc.

Soon on our way, we hit the not-mainly bit, and did the usual relay through the gates alongside the railway track, before emerging into Bridle Lane before the main road. Getting across the road here is always a challenge, and we filtered across at safe points inbetween gaggles of motors full of people desperate to get to Cheshire Oaks(!). Most made it into Dunkirk Lane, but three of us were stuck for some time.

Clearly the bunch hadn’t realised, which may have been a problem, as none of them knew the route that I would be taking. :-O

At Capenhurst, I almost caught up, but a few cars blocked my way. Fortunately, a big gear and fresh legs got me to the back of the group just in time to shout ‘turning right’ as many passed the junction. A screech of brakes and the group in the main turned (a few had already gone on, and were probably at the Mills by the time I had got there). I mentioned the sensibility of waiting for the navigator to join the group before assuming direction!

Onwards now through lanes that we don’t usually cycle, and across another main road, we found only the second piece of smooth tarmac within about 50 miles of Hartford, which was nice.

Soon at the main road again, we turned right and then shortly left into Mudhouse Lane and down through the village of Burton. Then down to Station Road and soon onto the cafe.

We hit the cafe at exactly the right time at about 11:50, before the masses arrived, and managed to order and get settled. The staff at Nets were equally as efficient as they have ever been on my visits, and even as they saw us roll in, had shouted ‘get the beans on, Weaver Valley are here’!

As it was Al’s week off (well deserved), it was only right to order a nice big slice of Victoria sponge cake. What a cake, as big as you can imagine, and dispensed onto a plate with a dragline excavator, I know that would fuel me for the way home. Never mind Al, I’m sure we’ll be back soon. Try not to look at the following image. You may find it disturbing. 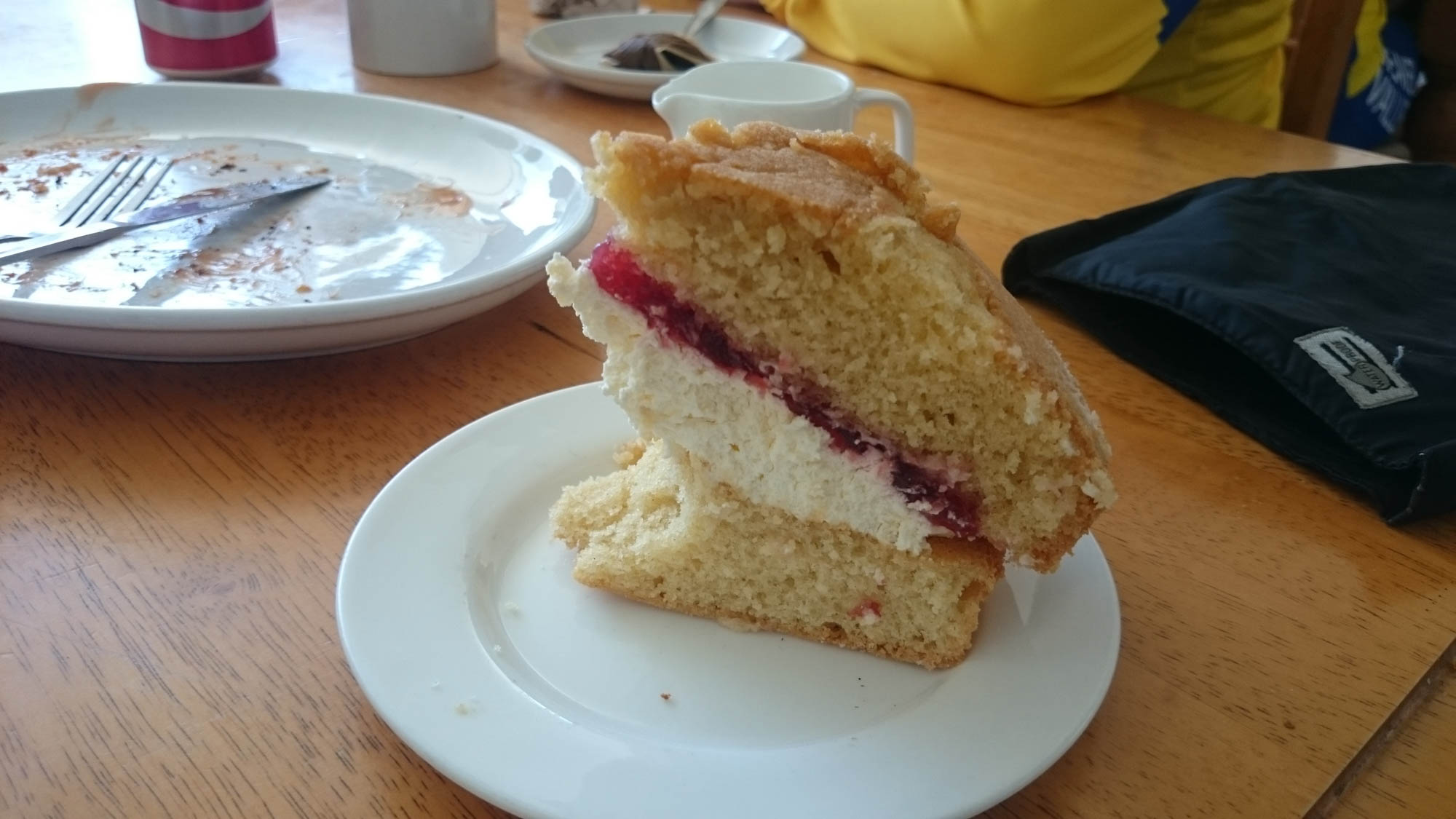 After royally stuffing our respective faces, we rolled outside and assembled in the afternoon sun, for a brief photo. 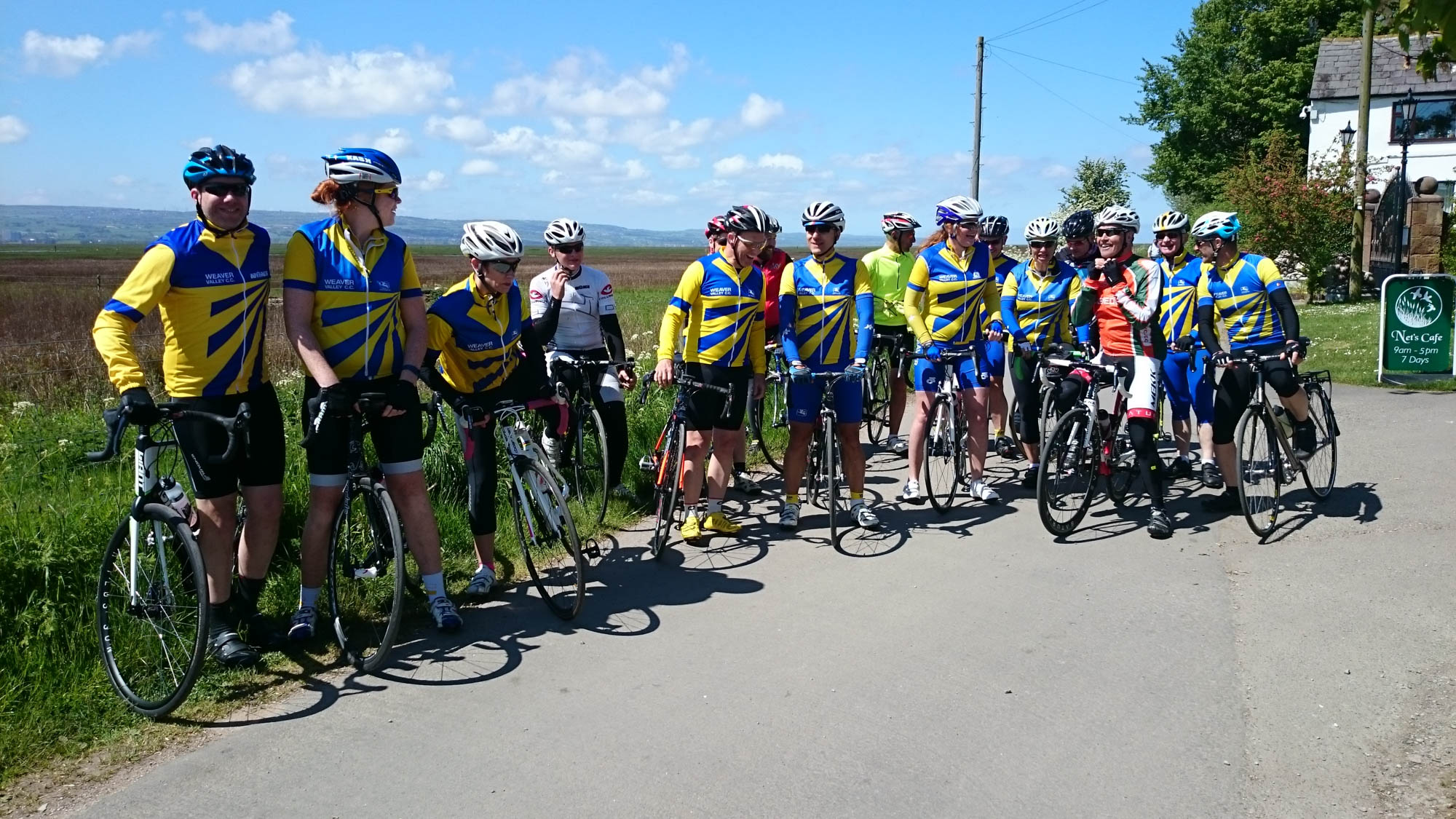 There was banter and insults aplenty. None repeatable. Look at the sky though, with Burton Marches and the Dee (not that you can see the Dee) in the background.

On a fairly direct route back, we made our way, but with the added bonus of the path along through Burton Marshes, which just happens to be on the doorstep of a live firing range. Always nice.

I don’t make this stuff up. Really.

See. That’s what the sign says, as Em didn’t notice at all, until it was pointed out at the other end of the firing range…

The nice bit about this track is that you get to ride along the boardwalk, which was built as a cycleway a few years back. It also gives you a great viewing point for spotting birdlife in the area. 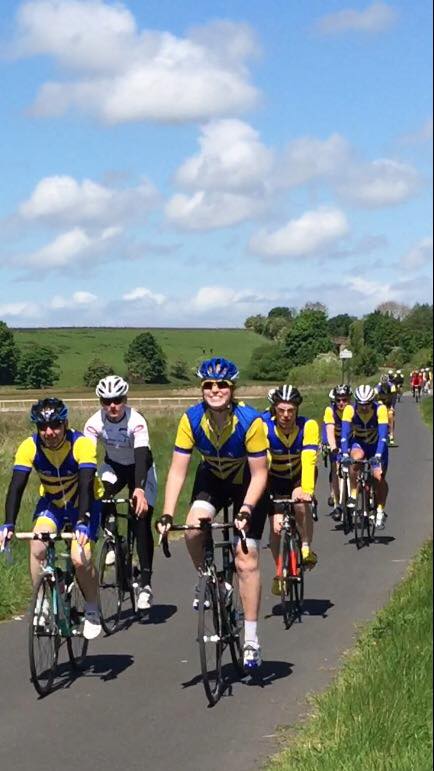 This is us along the track. Weather great, no wonder Em is grinning. Addendum: Em is grinning as she is on a massive sugar high from the effects of a peanut butter Magnum (other ice cream based lollies on a stick are available, but not in Em’s world).

There is also a short video that Steve G kindly posted on Facebook here:

We then went through the picturesque(!) Deeside Industrial Estate (no other choice on this route), but soon hit the Greenway, where we stayed until Mickle Trafford.

Back along through Ashton Heyes, as I had done a few months back, I chose to ‘delay’ the compulsory Delamere sprint with the ‘no-one passes me until I wave you through’ rule, which everyone seemed up for. This time, after the Dark Lane jjunction I left it till half way along Delamere Road, then set it off. Only a small acceleration occurred, with no-one wnating to pass John K for a short while. The Kev kicked it off, and Em and Steve and I chased on. Kev kept up a brutal big gear pace, but Em was all over him like a rash. Within site of the Hatchmere sign, Em kicked, I chased past Kev in my biggest gear, but there was nothing I could do against the TT might of Em, who took first, with me as a second, and Kev third.

Back down the fast downhill towards Bag Lane and the A49, then across into Millington then Hodge Lane, the run was pretty much done. A really nice day out (well I would say that as I led it), the group, despite the large size, were well drilled, organised, looked after one another, and were a credit to WVCC today.

Next week, we’ll do it again, but we might climb a hill called Mow Cop on the way to the cafe….