It’s true, she made me do it. Now she is a media luvvy, she can command such power upon the rest of us to complete any journalistic tasks at will. Woe betide anyone who doth protest.

Anyhow. Shorts today for me, but not for most who felt the chill after the balmy sun of Saturday.

We were to head to Dunham Massey on the short run, whilst Jim was to take to long run to Tittesworth reservoir. So indeed we did, heading out through Davenham, Lach Dennis, through Lower Peover, Smithy Green, up to Chelford roundabout then out through the lanes at a healthy pace (set by new boy Graham Gregory mainly) towards Mobberley, then Ashley, before turning back towards Dunham Massey. It was to be noted though, that  Al was trying to temper the pace and when he cycled back to the front of the group, soundly scolded Jim (W) at the front, for the unfriendly pace, some two seconds after Jim had jumped to the front for a turn(!) Jim wasn’t happy at the injustice of the unfounded accusation, and protested accordingly.

A really nice little route though, dreamed up from Al’s expert navigational head.

There was a healthy bunch of us (didn’t count the numbers, but I’m sure Al did), including Titch, who’d come out to show us his pretty Giro road shoes (see below, expertly studio shot by Titch himself). 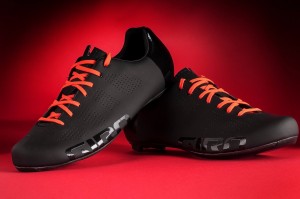 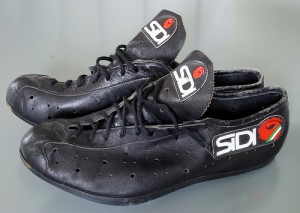 We did eventually arrive at the cafe, who welcomed us by opening the door and asking how we had avoided the many roadworks around Altrincham. Clearly, Sunday bsuiness had been afffected.

We feasted on beans and toast and cake before heading out. 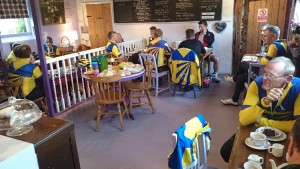 This is us, feasting on beans and toast and cake, with Al already looking at continuing with a second cakey conquest even before completing his first. He really is an unstoppable confection quaffing king…

Th return journey took us out along Back Lane, along the main road into Lymm, before turning left to head again through the lanes through, Agden Brow and skirting Great Budworth before returning to familiar home territory.

A pleasant day out again on the bike for the Weavers. 🙂

..well I don’t like his dancing, but I love his shoes… (said Craig Revel Horwood, earlier today).