The “almost as fast as the fast training ride” ride

Well this one was an eye-opener. I’d not done this training run before and it felt very different from a club run. We met at Hatchmere at 10 and right from the start it felt like I was hanging on. With me were Jim Williams, aka Cancellara, patron of the peloton, who professed to feeling ill but still kept cranking up the pace – Keith, who is fit as a fiddle despite his advanced age – Anthony, who’s just had a baby and said he was suffering from a training as well as a sleep deficit, and Neil, Stuart, and Steve Malkin, who all seemed to be in fit form and racing mode. We started off through Delamere Forest, and the normal sprint on the way home became a sprint on the way out. Riders kept going to the front to stoke up the pace, leaving everyone else having to accelerate to catch their wheel.

On the road out to Waverton, Keith punctured, it was so loud we thought someone had been shot. He’d already been proudly telling us about his £2.5k wheels, so maybe it was divine retribution. His wheels might have been expensive, but his inner tubes certainly weren’t, they must have cost 2s/6d in old money (they had definitely been bought before decimalisation) and were already well patched. 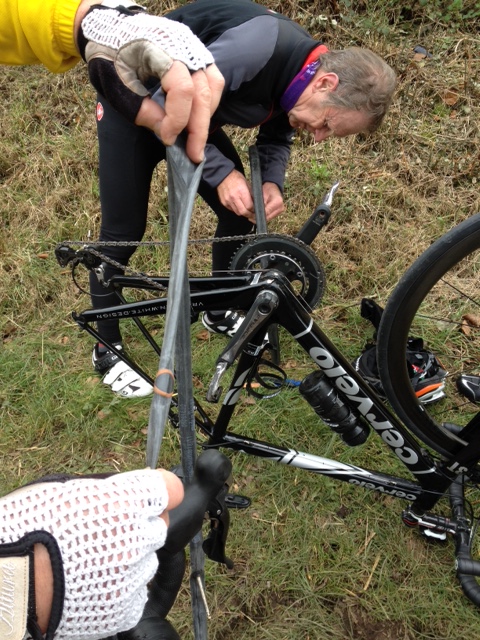 Here is Keith (all in black, hoping not to be spotted by car drivers) fixing his puncture with his patched tube.

Anyway, on we rode on what I gather is a Saturday morning set route through Holt, to Rossett then along the river (where we saw the annual spring bore coming through, with a few kayakers riding a fairly unimpressive wave. It wasn’t in the same league as the Severn bore, but was nevertheless an interesting phenomenon to watch). The “through and off” started in earnest on the road out of Holt and continued pretty much uninterrupted to Two Mills – Stuart reckoned we’d done an average of 19mph+, which is certainly how it felt. I just hung onto whichever was the last wheel, but I enjoyed the sense of speed, it’s the same sort of big-ring-adrenalin-thing that you get in racing. Anyway with 1km to go the elastic snapped and it suddenly felt like I’d lost the use of both legs. But I still felt quite proud for having hung on for so long.

The café was convivial, then home, rather steadier thank goodness, until the chase through the Forest – and I got dropped. I’m told Stuart led out, Neil then took to the front but in-form Steve M snuck out behind both of them to claim the win. And so home, I got dropped again at the yoghurt factory and was quite relieved to able to tootle in, although Stuart was chivalrous enough to wait for me in Hartford and ride home with me. A fabulous ride, one of the fastest I think I’ve done, thanks chaps for the lead out and letting me sit on your wheel!

Road Runs, Training ride - road, Training/Racing
Delamere – in the gloop
do you want to join me in making up a team for the following