I approached today’s club run with more than a little trepidation; aside from the Llanberis weekend, the last month has been pretty barren with regard to miles, in fact I have not touched my bike for the last 3 weeks. Anyway, whether I ended up a complete wreck by the end, a gorgeous early April day was awaiting me and all who ventured forth. Our little group consisted of Jules, Matt, Carol, Ben, Stu, Anthony, Paul and me and we set off through Hartford and Davenham at a very steady pace, myself and Jules taking the first stint on the front in to a gentle but persistent breeze. I told Jules my plans for the day’s route, he liked them but we agreed it would be best not to broadcast them too early.

Past Redesmere, taking in it’s steady drag (lump 1) and then down to the main road and up Birtles Lane (lump 2). The swift descent in to Prestbury leads to the little rise in the Macclesfield direction (lump 3). All just appetisers these really.

When we got in to Macclesfield Jules and Matt headed off home, Jules to get some serious Eurosport action in and Matt to not decorate.

We started up the Cat but took a nifty little right turn which had been  demanded for by the group. Hence we were welcomed in to the open cavity that is Tegg’s Nose. Various grunting, sweating and cursing accompanied the climb but we all got there in the end to be rewarded with the first of the day’s many fantastic views over the countryside (lump 4). We headed down to meet the main road at Walker Barn, rolling up the cat in the sunshine, all happy with the world. I thought a right turn would be a good idea and our enthusiastic bunch followed up and over the small piece of Buxton Old Road (lump 5).

We crossed back over the main road to head in to the Goyt valley, down the hill, glorious sunshine, a slight tail-wind, perfect. Our meanderings took us past Lamaload reservoir and up Pyms Chair which was particularly testing today, not at all chair-like, more like a ladder without enough rungs (lump 6). Our struggles were rewarded with a swift descent down The Street to the Goyt Reservoir. Unfortunately my suggestion that we go up the steep Goyt’s Lane to Long Hill, Buxton and the Cat ‘n’ Fiddle was rejected and that meant we climbed up towards Derbyshire Bridge along with a crowd from the Frodsham Wheelers (lump 7).

We made our own way down the A54 to Blaze Farm, arriving in ones and twos only to find the place was heaving in a perfect storm of busy-ness; school holidays, lambing and fantastic weather. We were told the wait to be served would be around 3 millennia. A discussion followed and we decided to head for The Ryles Arms on Sutton Lane. I suggested it would be a good idea to take the scenic route and so we climbed back up towards the Cat the mile or so to the left hand turn to take us down to the valley (lump 8).

An easy ride through the valley lead us to The Crag Inn which was a pleasing oasis. Carol said she had been there with Dan in the past but I don’t think anyone else had. Unfortunately there were no beans to be had but cheese, tuna and steak sandwiches were ordered from the lovely lady behind the bar the and we all sat out in the sunshine for a nice long time. They obviously want cyclists in there as there are various bike magazines scattered about as well as a tool kit for those that need it – they just need to up the bean on toast count and it will be a perfect new venue. 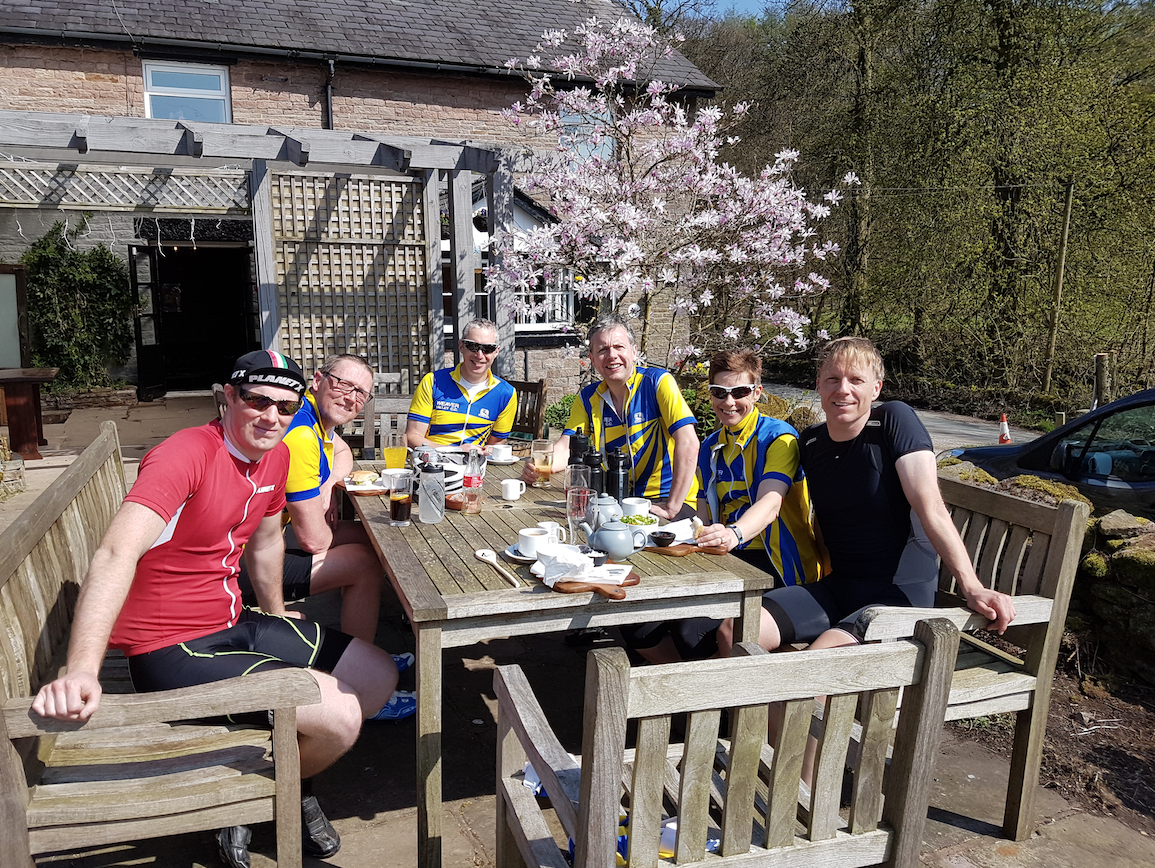 I could have sat there all day but Stu said he should have been home half an hour ago and so we were compelled to move onto the final major challenge of the day which was Nabbs Road, a steep little beast with a few false(ish) flats to lull you into thinking it’s over before then kicking up again mercilessly (lump 9). 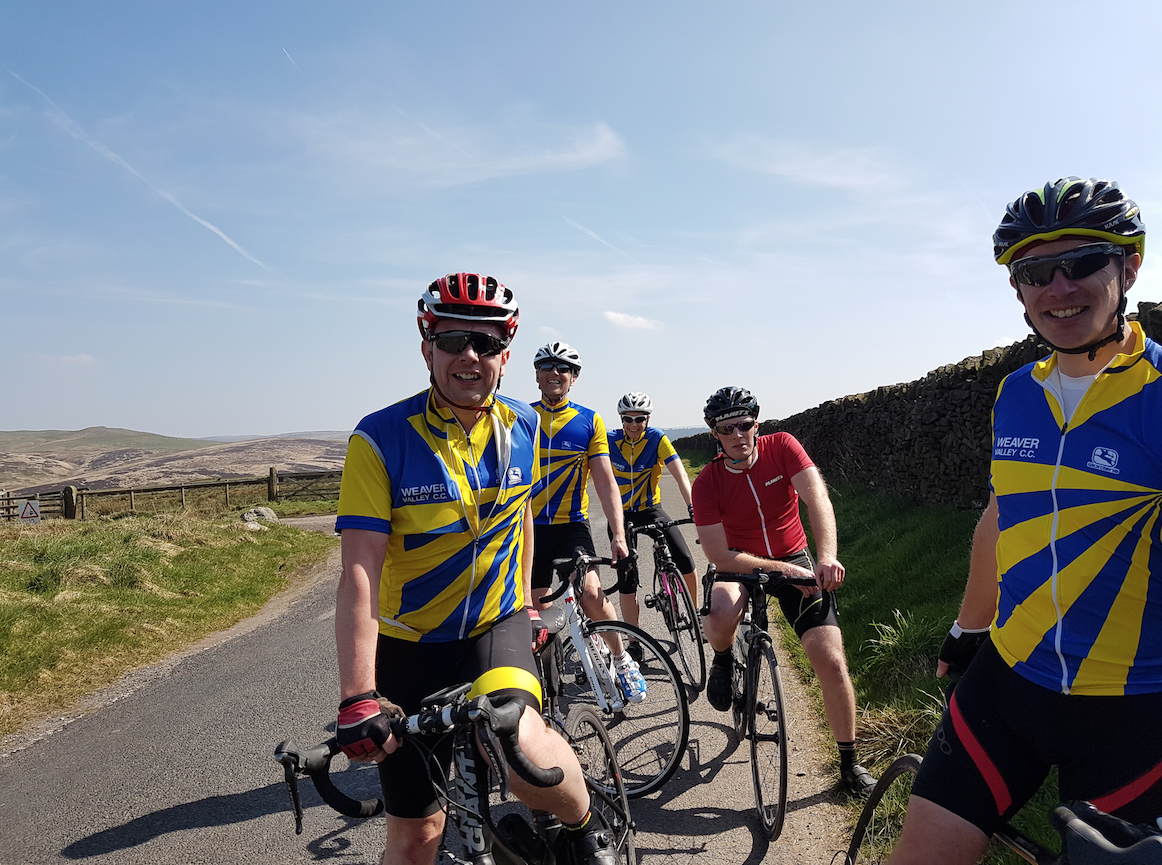 Down the other side of Nabbs Road and the sharp corner puts you on to a little rise heading for Withenshaw Lane (lump 10).

From Withenshaw Lane onwards we were rewarded with many miles of down, down, with the odd bump thrown in. Paul, who had been a middle runner during the day with regard to climbing, was determined to get to the top of at least 1 hill and sprinted hard to get up the rise heading towards Gawsworth, however beastly Stu denied him that by a quick turn of pace. Paul wasn’t finished yet though and mounted a fierce  surprise attack on the lane up to the old (and far better) downhill course. The victor’s spoils went his way and much roaring, fist pumping was in evidence.

Back down to Siddington and from there we rode down quiet lanes for the first time all day (the rest of the day it had been positively teeming with cyclists, no bad thing) towards Goostrey, Allostock, Davenham and Home.

We were a chatty, friendly and well behaved group all day and although we were spread out on the climbs we always regrouped at the top. I was surprised that i got around in reasonably good shape and returned home with a bit over 80 miles. There were no mechanical issues and no histrionics with anyone, just a meander through some gorgeous lanes with friends. And a few lumps.