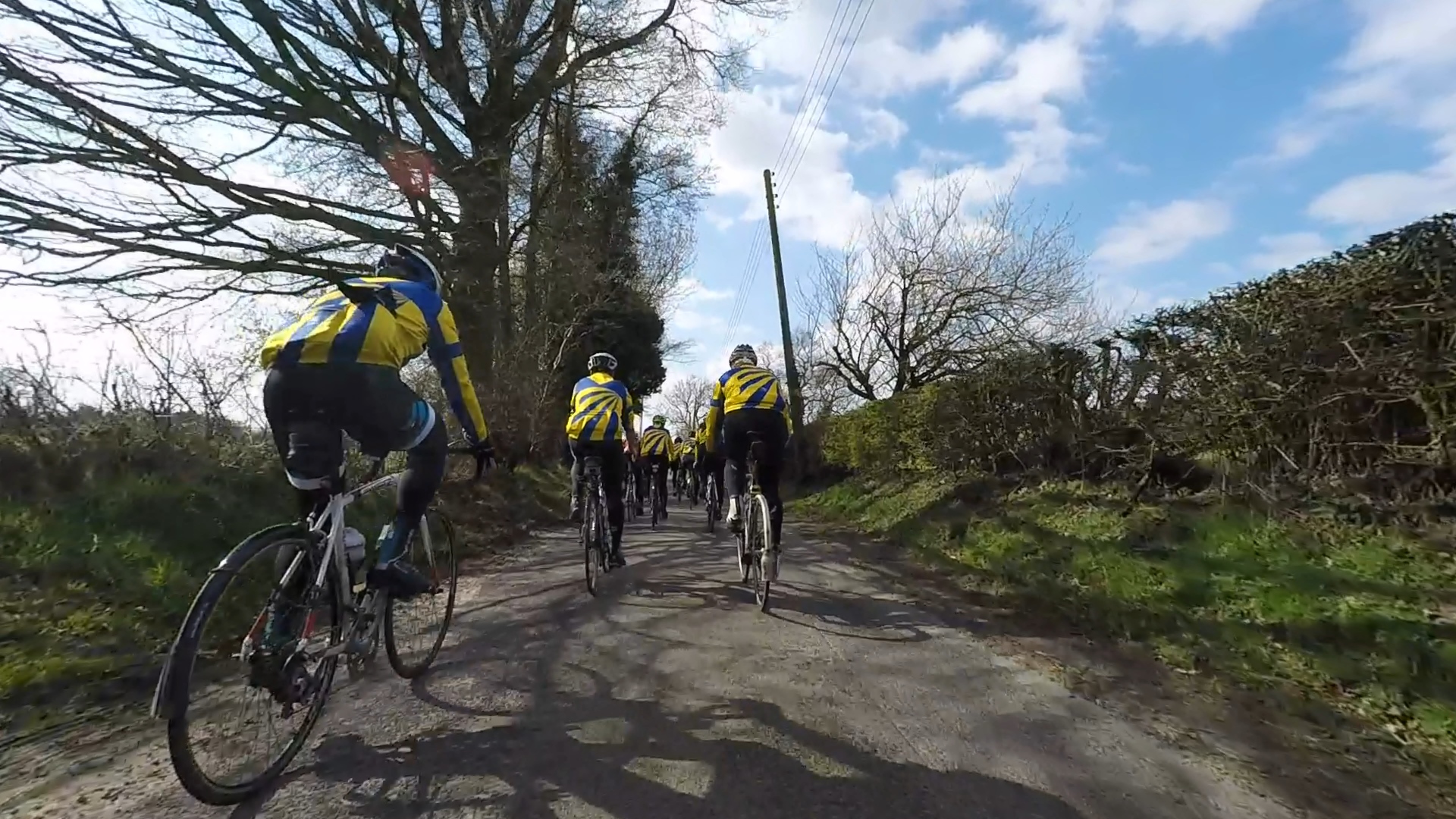 Look at this. What a day. What a scene. What a nice, well controlled, neat and tidy group.

Well I’ll tell you. There was only the slightest ‘cool’ to the air this morning, and as we gathered at the club amongst the usual throng of kids and adults about to play rugby, the sun popped out to say ‘hi’, as it did last week as well. Most odd.

Two groups headed out in a slight change to plan given that we would over-run one cafe with our numbers! (we do this from time to time). One group off to Pott Shrigley, and ours to Henbury.

We set an easy pace, which gave plenty of breath for chatter and ensured that we left no-one behind. We had new rider Nat with us, who did a great job of riding with a group for the first time. We thus settled into this pace as the sun continued to shine, and we pedalled through Cheshire lanes through Goostrey and Swetenham, out to Siddington and then up the long hill, which seemed all the nicer in this weather, rather than a time (that Caroline reminded us off), that Dave chose to ride a time trial on the Siddington circuit in a skinsuit during a cold downpour of hailstone. It takes all sorts. Dave, by the way, chose to come out today on gears, but then subsequently only chose to use one of them. It takes all sorts.

Soon we were on the hill, chatting stopped and we progressed, to the cafe, well warmed up and ready for food. I checked the menu with Alan at the cafe, who had obviously already ordered (carrot cake), to get his cake recommendations.

Food ordered, we settled down to shared pots of tea, and chatted away as per usual. Well I say shared pots of tea, but Jo had a big mug, and was at the tea in full race mode. 9 litres of tea later (or maybe gallons as we were discussing our metric/imperial system of measurement at the time), and she’d finished the pot, where I had to make do with a thimble of tea to wash my cake down.

Back on the road, we enjoyed the winding descent to Congleton Road past Redesmere, and then back through a slight deviation to the norm (Dave’s magical mystery tour), through Whisterfield, towards Badger Bank, Withington Green, and onto the main road, before back into Bomish Lane, and a quick right to Batemill Lane heading towards Stocks Lane and the main A50. Not for long on the main road, we jumped off again at Toft corner, for the familiar last part of our 10 course (don’t forget that the TTs start again on 27th April!), before a near emergency, where the 9 litre/gallon tea intake caught up with Jo. Fortunately, we stopped at the Crown in Lower Peover, where great relief was found(!), and we carried on.

A brief stop split the group as we hit the end of Common Lane, followed by some through and off action from the back markers to get back to the peloton, where Elaine almost brought back to carrot cake from dinner to say hello…

It was all done bar the shouting for today as we swept through Davenham, and we started to split up the happy group.

A really nice, fresh airy day, at a fantastically pleasant and easy pace. A nice tight, well controlled group of riders all looking out for each other is an absolute pleasure to ride in.