This is the fastest course in the Manchester District on the A50 at Blythe Bridge.  It is also very likely that this will the last event on this road for a few seasons if not ever, as major road-works over the coming years will prevent racing.  So the event was massively over subscribed and the lucky few were hoping for a good day.

The day proved to be windy and very wet until early afternoon so the event was actually delayed by 30 minutes as the organiser made the very difficult decision whether or not to call off the event.  In the end it went ahead and luckily the weather massively improved but the wind remained quite strong.  On the road however the wind was blowing from the South West which is best for this course as it means a cross wind practically the whole way out and back.

Caroline Fearon was down as a reserve but fortunately got a ride.  She found the concrete mountain tough on the way back, but not as hard as usual due to the cross wind.  She stopped the clock at 1:11:17 (21.04 mph).

Ever green Alan Shuttleworth rode a beautiful hand built fixed bike with ornate lug work today.  He likes to mix between fixed, gears and trike and has an encyclopedic memory for not only his own times but everybody else’s.  Today he was very pleased to show off his new club skinsuit as he too was a reserve on the start sheet.  The skin suit clearly worked as he was happy to record a 1:06:09 (22.68 mph).  Alan has been racing year in year out for nearly 60 years and riding a bike longer than that coming from a famous Manchester Cycling family.  His enthusiasm is infectious.

Gutted last year when she failed to starts this event, Emily Martin today managed an excellent PB of 1:04:21 (23.31 mph).  As usual she wasn’t happy as she said she didn’t try hard enough and knows she can go faster.  I’m sure she can too but not sure she should be so hard on herself recording a PB when she is clearly not in her best form yet.  Keep entering races Emily and soon you will fly.

Despite complaining about lifeless legs today Chris Gilbertson got well under the hour with a rapid 58:31 (25.63 mph).  This course is fast but you have to work for it and he clearly wasn’t hanging around.

After a Cheshire PB last Saturday Alistair Stanway wasn’t happy with his 56:44 (26.44 mph), just 30 seconds or so quicker than he did on the much slower J2/9.  Sometimes it just doesn’t happen on the day but again I think he’s being harsh on himself as an average over 26 mph is hardly slow.

Now for the big finale as I think everybody who is interested was expecting great things from Jim.  He didn’t disappoint with a rapid 52:37 (28.51 mph) which is the second fastest 25 mile time ever recorded by a Weaver Valley CC rider, only bettered by Lee Suthard, the Year he took the World Master Pursuit title.  He was rightly chuffed and said that he would celebrate by doing a 100 mile training ride Sunday on his TT bike in preparation for the Anfield 100 next weekend.  Me thinks his 100 PB will be obliterated in that event so watch this space…..

The day was clearly a good one as 3 riders beat the magic 50 minute barrier and the winner was Adam Robinson of Vision Racing with a stonking 49:16 (30.45 mph). 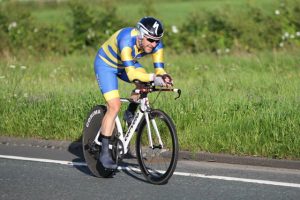