In an effort to pretend that life is still normal, a small, disparate group of us have taken to convening on a Sunday morning for a long non clubrun club run. Last weekend was officially classed as, ‘hilly’ and so it seemed only fair that this weekend should be in the, ‘flat’ category. During the week various messages had been exchanged and the cyclists mecca that is Sleap Aerodrome was decided upon. After yet more messages and in spite of no one really trusting me, I offered to get together a route, ‘after all’, I said, ‘it’s flat all the way there’.  This week’s time and meeting place was decided as 8.30 am at the top of Cinder Hill and 7 of us duly turned up but that was not a problem because 3 had arranged to go on a short non clubrun club run. It was a bracing 4 degrees at that time. The magnificent seven were Stephen L, Paddy L, Benn J, Alex CG, Paul G, Phil B and me tagging along behind. Stephen, Paddy and Benn went their own way leaving just the 4 of us.

As is the case with cyclists that have a modicum of experience, we took turns on the front to share the pace, chatting too loudly, happy to be free, a bit like recently released ponies (not so much neighing though). On the front and riding along at over 20 miles an hour up and down dale I flattered myself to think that I was in good shape, in fact the pace was more to do with the deceptive and sinister wind that was shoving us along with an evil, ‘hahaha, I’ll get you pesky kids’. Maybe it was that that made me need to wee 73 times during the ride (I am very adept at weeing on the go as necessary so as not to interrupt the momentum of the group) or maybe it is just because I am so old.  Anyway. The journey to Sleap passed without mishap and we arrived by 10.45. For lunch. 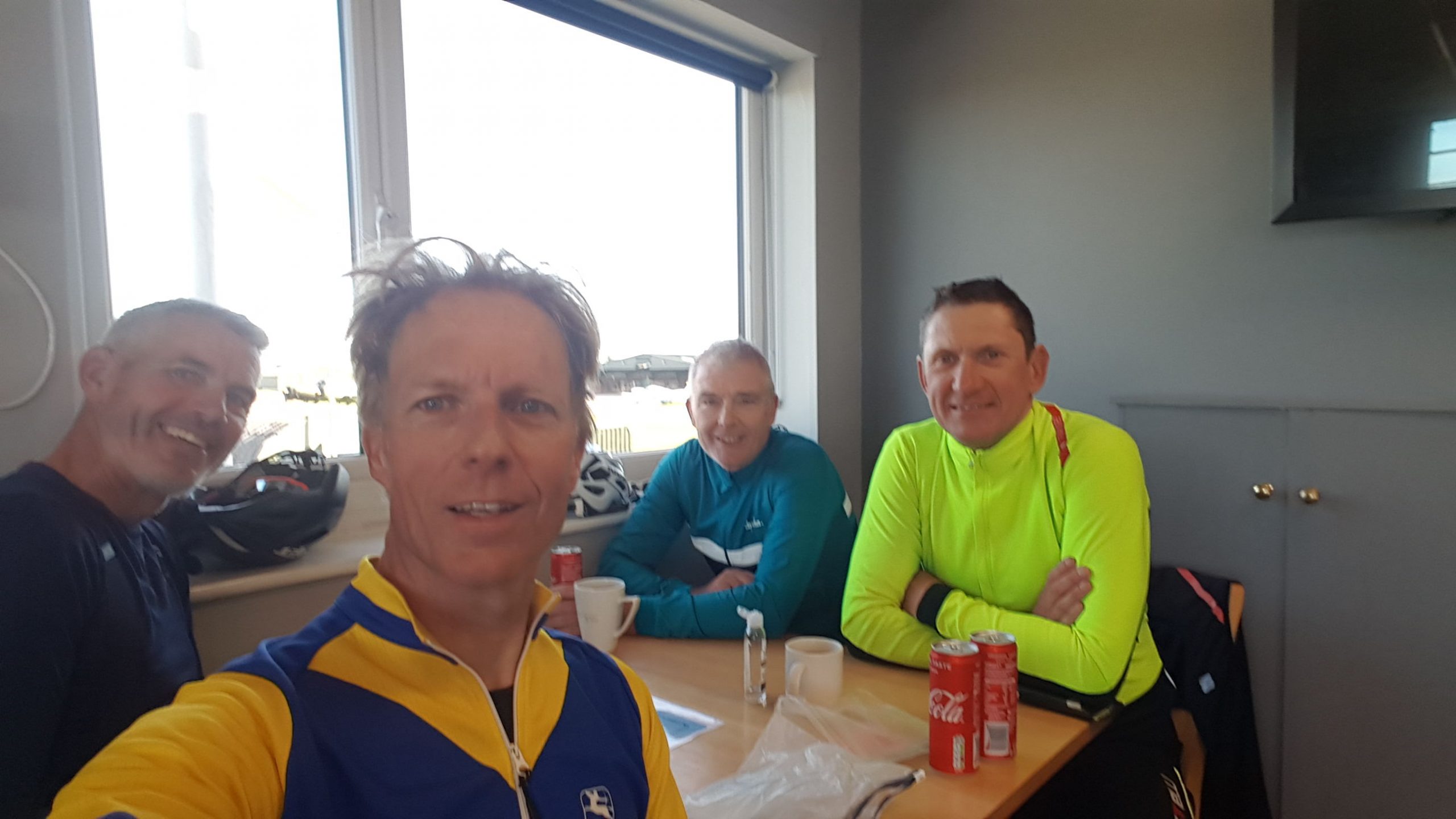 Sleap is a delightful place, with fresh, home cooked delights and staff out of a 1950’s fantasy. Why on earth don’t we go there all of the time!? Drinks were ordered, food was ordered, tales were told, a picture of Chloe Dygert was shared and Phil ran out of the room. All regular stuff. After much hilarity we paid the bill to Mrs Overall and set off. Only we didn’t because Paul hadn’t had enough rest & as a ruse fettled with his headset for 15 minutes. 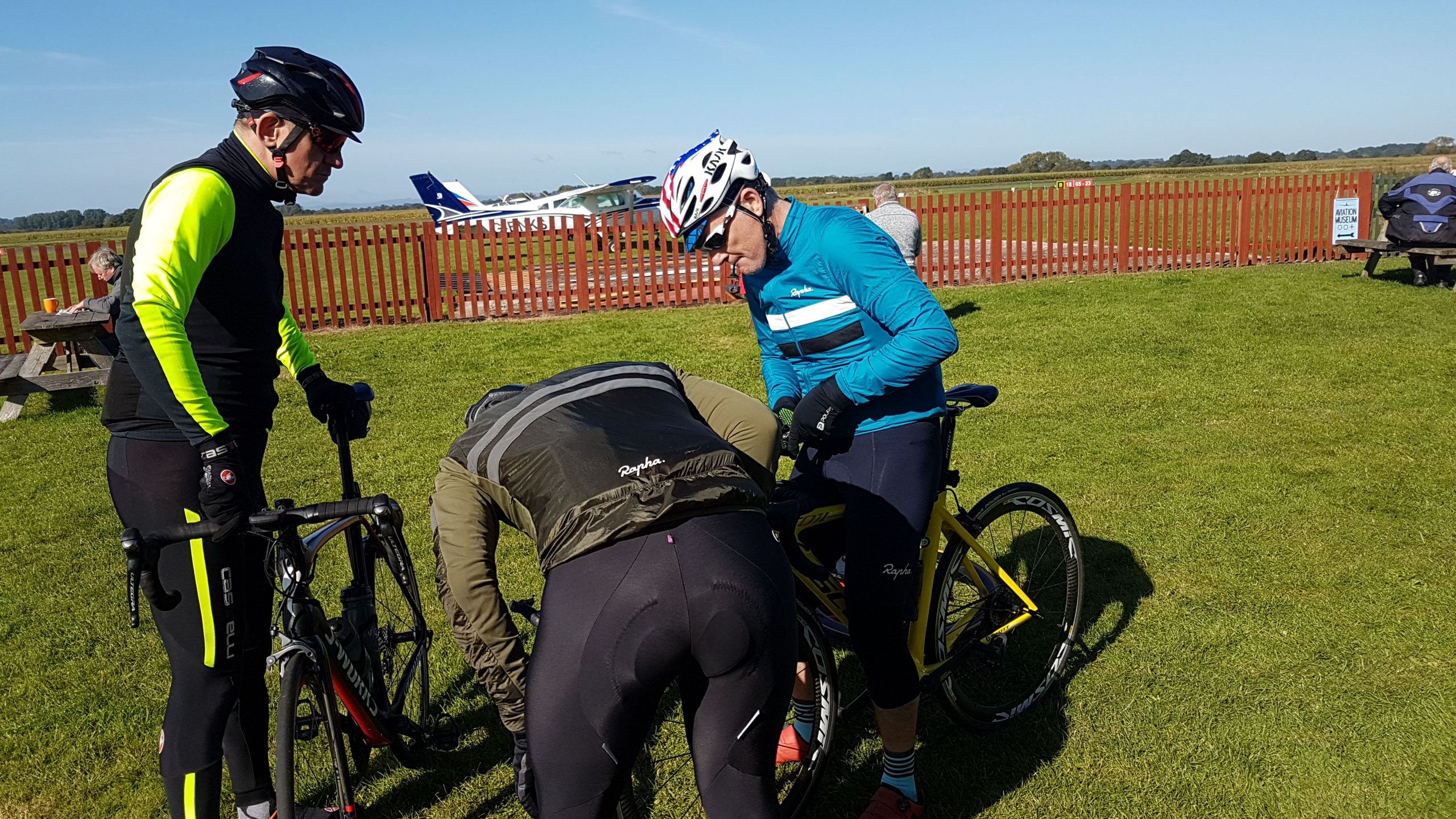 Fettling completed we set off and immediately we realised the misconception we had been under on the way out viz a vis the wind. We were riding in to what felt like a cold fridge door being shoved in our faces. We all agreed it would be loads of fun coming home.

I had arranged a cracking route back with no main roads, the first part of which entailed us going through a small flood, down a path and then across a high speed railway line. How my clubmates loved it! The roads I had found to come home on were delightful little country lanes, often with chocolate box cottages and vistas towards the distant Welsh hills. They were also in many places of such shocking quality that the Paris Roubaix organisers would blanch. And so it was that Paul punctured. I am pleased that he had this mechanical on a sheltered, sunny lane so I could take in some rays while he struggled. We turned right at one point and the regular, already awful road just disappeared and we were riding for a couple of miles on what looked to be spoil from a quarry which had been dumped and crudely flattened by an angry giant. This lane took us down a steep hill in to a tiny valley and then sharply up the other side, Strava tells me that only 100 people have ever attempted this piece of road, a testament to how out of the way it is.

Paul, in need of another rest, identified an issue with a tyre and we all stopped. Again in the sunshine so that was nice. Paul did his fettling and we were away again. Our route then took us through the grounds of the Carden Park Hotel which was a nice detour and a good opportunity to watch some golfists swinging their golf bats. Out of the hotel and we were finally on the beginning of the end of the ride, at long last seeing road signs with names we recognised. The wind was taking it’s toll and much heavy breathing was being done with many moaning legs. I did promise that it was flat all the way to Sleap, I neglected to mention however that my route home included Chapel Lane and the back side of the Yeld. From the reactions of my ‘friends’ I am sure it was a very popular decision to include these 2 challenges so far in to the ride. We grunted up the hills before regrouping at the tops and plunging in to the forest for the traditional sprint.

At Hatchmere Alex went his own way to add some extra miles to make sure he got his 100 in and me, Paul and Phil rode the usual way back past the yoghurt factory and in to Hartford where they both peeled off to outsprint each other all the way to Middlewich. I sauntered home, arriving just in time to watch the very end of the men’s road race and get started on dinner. A cracking, challenging day out with 103 completely flat(ish) miles covered. Thanks to all that made it. See you soon.