Sometimes you’ve just got to stop and look around….

Riders appreciate the view from the top of Long Lane, Bollington

A warm/cold* day greeted the riders with shorts/leggings* today, as we headed out for a club run to Bollington.

A decent sized group was chatty and happy as we made easy and steady progress out from Hartford through Davenham, Lach Dennis, Goostry, Swetenham, and onto Siddington and up to Broken Cross. We scooted past Macclesfield, and and out towards Prestbury, where we climbed out again towards Bollington.

After a stop and some banter that cannot be repeated for the sake of public decency(!), we progressed onwards through Bollington and had a little loop to take in Pott Shrigley before turning for the cafe (the Coffee Tavern).

There, we besieged the cafe and happily ordered tea, beans, toast, the usual, but also saw the excellent offerings on the board for afters! Both Al and I could not resist Spotted Dick and custard (who can?), and we ordered, whilst much banter of the type only heard in a Carry On film was bandied around. Al wasn’t going to have beans on toast, so just tuck into his pudding, not quite happy about the amount of Custard that he had with his. After joking that in fact they were saving the custard for me, mine arrived, drowned in custard. Al was not happy, and took a photograph for evidence. This may appear on BBC Watchdog at some point in the future. 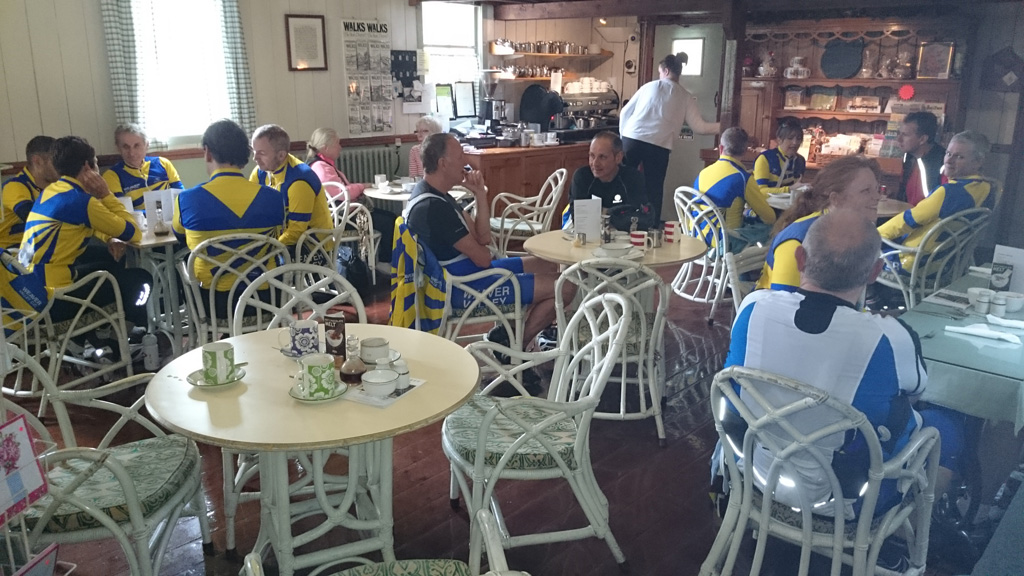 Weavers Wait, and amuse themselves with witty banter.

We also saw our chairman with Jules at the cafe, who weren’t on the short run today, but had dropped off the long run. Graham must leard very quickly, that in two weeks time, he cannot drop off the long run (LEJOG).

On our way with bellies filled with delicious food, we took the unusual detour of Long Lane, as Graham had never descended the lane, which becomes the cobbled Beeston Brow. This we did. Some with speed, some with trepidation, but not befoe stopping at the top of Long Lane to take in the view, which today seemed endless.

After Bollington and Prestbury we then returned on a slightly more direct route along the main road from Broken Cross to Chelford, turning to pass through Peover Heath and Over Peover up to the main road, before getting the hat trick of Lower Peover as well. Back home to Hartford through Davenham rounded off the day. A great day out. Humour not for children…. 😉