First club run of 2017, and many eager faces appeared at the busy club. The long run disappeared with vigour, heading for Prees, and we were to head for Tilly’s at Bunbury.

It get’s pretty busy at the cafe on a Sunday, so we decided to have a more direct run out. Conversation was quickly turning to subjects like Llanberis even before we hit Whitegate, citing lay-offs over Christmas, injuries, colds, and sheer laziness (that was mine). Enthused forecast of lots of training were talked about and even dieting (whatever that is).

Al deftly and expertly navigated a path through the outskirts of Winsford, through quiet lanes that quite a few hadn’t ridden before, towards Eaton, and then back south towards Alpraham. This provided enough lumps and bumps to give us all a good workout, whilst not being too fast to stop conversation (that’s a good marker for anyone leading a Sunday club run. If the conversation stops, you are going too fast!!)

It was a direct run too, as we were keeping a healthy pace, and the bunch kept together, we ended up hitting the cafe at about 11:15(ish), already finding half of the cafe  seats filled with North Cheshire Clarion. Despite the shocked look of the cafe staff, we sat down whilst they scurried around to get the orders ready. They kindly brought out the brews first, in a staggered fashion.

As I waited for my tea, Eleanor announced that all she needed was a cup for hers.

At this point, I became aware that clearly, Eleanor had been working at Quarry Bank Mill, not as a Manager, bus as a mill worker from the 1780s, and as I pointed out the mechanics of the system, she seemed amazed at the new fangled pottery contraption, described in modern parlance as ‘tea for one’. 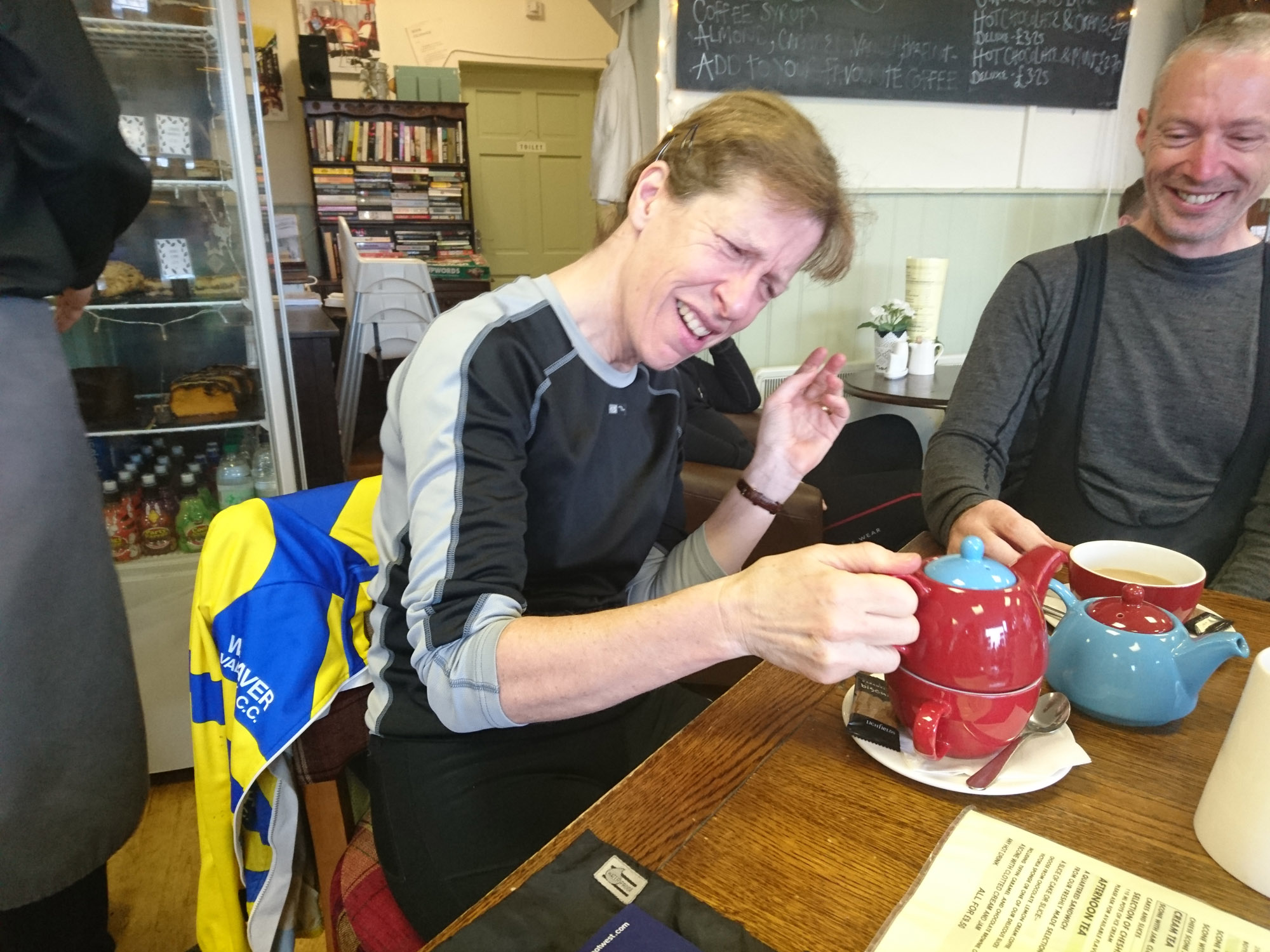 What on earth is this? Is it a teapot? Where’s my cup? 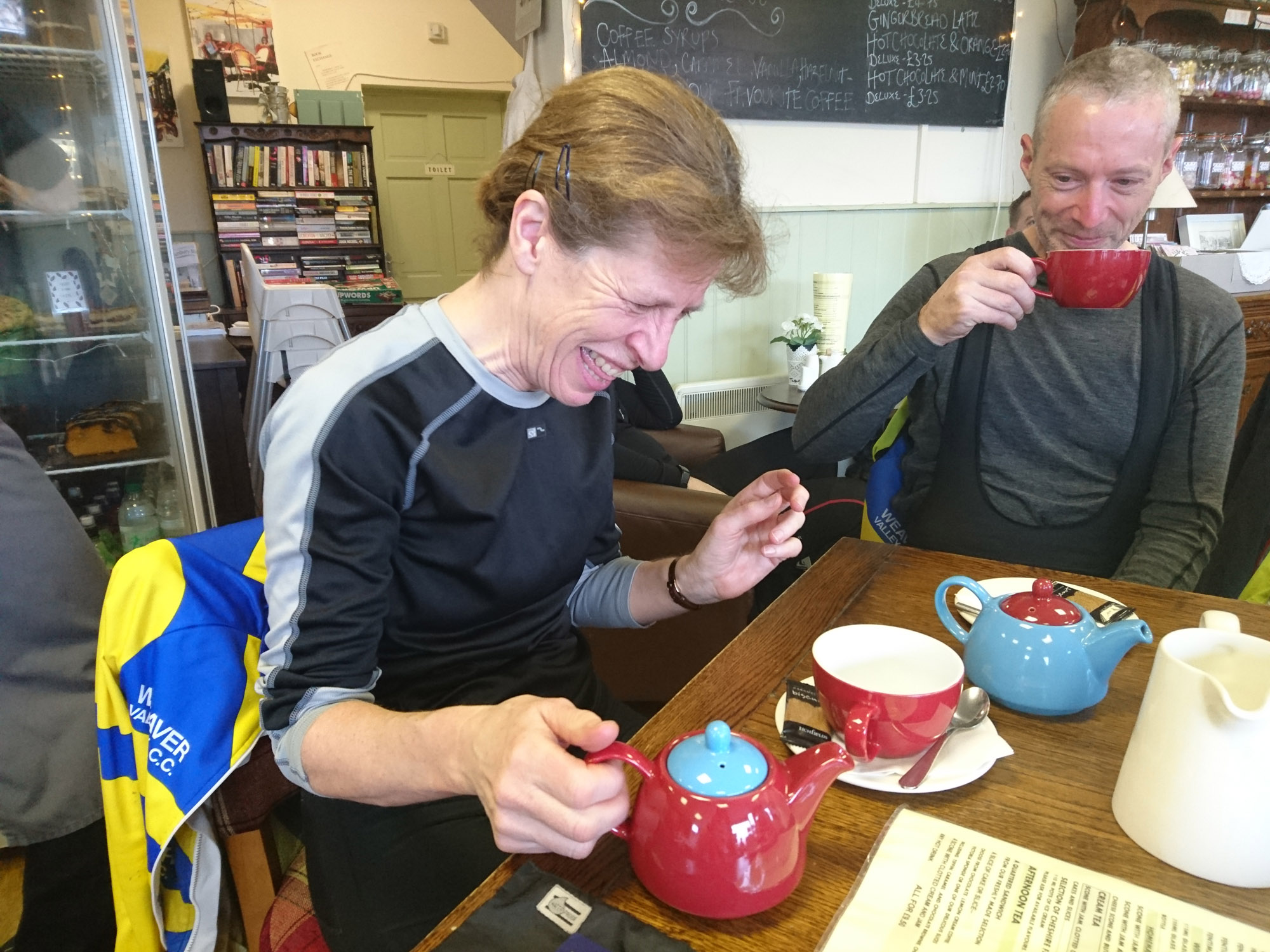 Ah!! There it is! Whatever will they think of next? No more ladelling water out of a horse-trough for me at t’mill!! (Stewart looked on, bemused by this, as he had mastered the art.)

Eleanor of course lives here, just up t’road, in the Apprentice House, in the year of our Lord, 1784.

Anyhow, after filling our bellies with far too much food, we set off, although Matt complained that he already wanted a wee, but didn’t want to queue. Not 10 miles later, a shout went up as someone had dropped off the back. Matt. He really needed a wee.

Al and I were kept enthralled at the front, by Emily and Elaine’s home furnishings conversation. Alan fell asleep, but I quickly woke him, and we joined in, Alan extolling the virtues of budget soap powder, and I talking about cushions from Ikea. That just made the conversation from behind carry on through Wettenhall to Winsford. I’ll shut up next time.

Back through Wettenhall, we soon skirted Winsford again, and made our way back to Whitegate, where the speedy descent, and speedy ascent for many, continued. There are some healthy legs out there already.

At Hartford we then splintered gradually, and made our own ways home. A nice short run to start the year, although my legs are aching already…