After encouragement from Dave Fearon, I entered the R25/3H 25TT a few months ago, then looked at where the course actually was and realised it was in the southest of Wales! So I planned a couple of nights away with lovely friends who live in Gloucester which meant I could see them and also halve the distance to the start, then only had to get up at 05:45 this morning for my 09:32 start time!! It’s a funny thing to commit yourself to such a faraway race. You are going. You are riding it. That’s that. However, with a forecast of a bit of wind and only 20% chance of rain, all seemed well anyways. Driving there this morning however, it was tipping it down the whole way there, and by the time I’d arrived it was to be 16mph winds and constant rain until 12!

Rather than ride the 2 miles from the HQ, it made more sense to drive out and park at the start, and it seemed everyone else had had a similar idea. I managed to stick my rollers under a tree to keep dry and proceeded to get my legs going. It seemed like a bright idea until the wind blew and all of the water blew off the tree and gave me a soaking.

The R25/3H course starts from Hirwaun Industrial Estate, heads 5 miles downhill out to the A465, then it’s a fairly flat bypass over a couple of roundabouts, before leaving the bypass at mile 15, crossing over the top and coming back the other way, finishing before the 5 mile hill starts again. With this and the strong wind in mind, my rough plan for the TT was to ride hard into the wind for the first 15 miles, trying to hold whatever advantage I could build for myself on the initial downhill ramp; and be as close to 25mph as possible by the turn back. Then, with the tailwind behind, wing it back for the last 10 miles and do my best to beat an hour.

Heading out onto the A465, this would have been all well and good had the wind not been so violent that I had to spend a lot of time on the side bars so I could hold my bike steady – and suddenly feeling very glad not to have borrowed a disc wheel from Iain Young! My solace though was that despite being more upright I was still spinning out my 53 x 11 gear and going pretty well. Onto the flat and I quickly caught rider 91 who was my minute lady, then carried on holding as best a pace I could into the roaring wind. By 8 miles in I was completely soaked and struggling to see through my visor, and also niggling with a hip problem that has been a recurrent irritation this season on TTs. With all that going on, catching rider 87 was a tonic and kept me going.

Not too long after, I could see another lady dangling in front tempting me, so focused myself on inching closer to her. I hit the turn back roundabout at an average of 24.3mph, then dug in to make the most of the tailwind home. The ride was much steadier on the way back, and despite being more uphill than the road out, was so much faster! Sweet relief! Another plus was that with the wind behind I could take my visor off and see properly without the rain getting into my eyes. It also meant I could see as rider 89 inched ever closer until I caught her at a roundabout with 2 miles to go. Pushing as hard as I could to finish, I was overtaken by 89 who had clearly decided I wasn’t going to beat her to the line, only I hold the same kind of competitive edge so I dug a bit deeper and overtook her again, finishing with a 59:28 and averaging 25.3mph. I’d love it if that was a club record, but I’ll need to confirm with Mr Fearon as we’re not sure the one shown on the club page is correct.

It was good to ride a fast course, but the only complete bugger is that as soon as you finish this one, you have to stack it back up the 5 mile hill you came down to get back to the start! So with a hip which was shot to bits at this point, and completely drenched to the bone, I pottered back up what felt like the longest hill in the world back to the car. Those with support peoples had relatives waiting lovingly in a layby for them to pick them up after instead!

My best so far this year has been an 01:01:57 on the J2/9 in Cheshire, but I have felt that I have a lot more to give on that course. To do my first sub-hour 25 today felt really great, and I plan for it to be the first of many. When I got back to the HQ, I had a chat with some people there who said that the weather had cost them 2minutes off their usual course time, so it felt good to have a measure for what I could do there on a good day – and I will definitely be back next year to try for just that.

I had been hoping to meet Hayley Simmonds today as she was scheduled for a ride, but as with many others she had a DNS. I’m guessing due to the weather and not wanting to risk maiming herself on a bypass. Below shows the results that were there as I was at the HQ, I couldn’t see many women who’d gone under the hour, but suspect there will be several who have once the results are published / if I look properly!

A decent weekend all in all, seeing lovely friends, a solid ride today and an achy car ride home eating a Dairylea Lunchable, as approved by my dietician Carol due to its high protein and calcium content. I will definitely be back there next year, when hopefully Mother Nature won’t be being such a miserable cow! 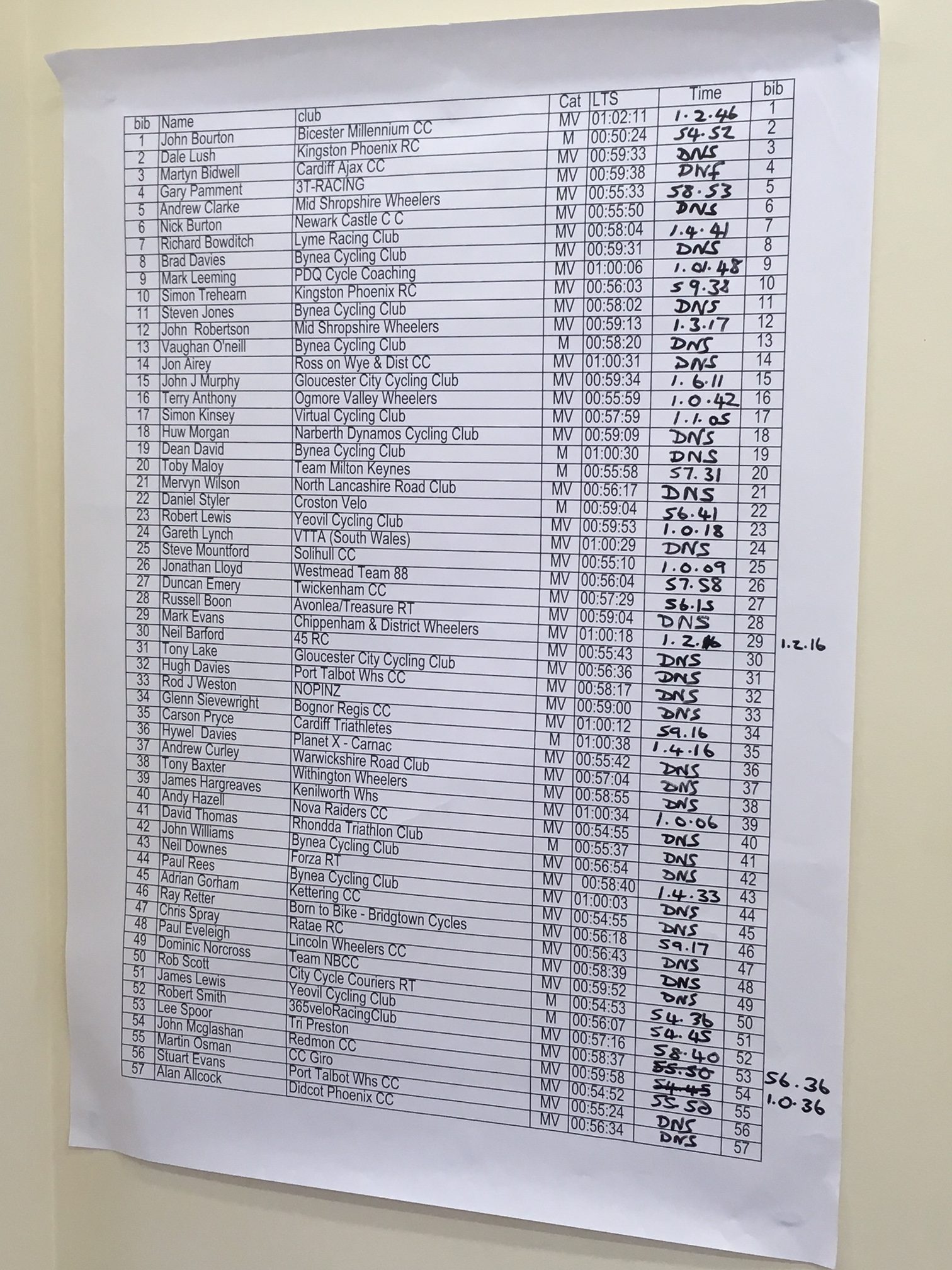 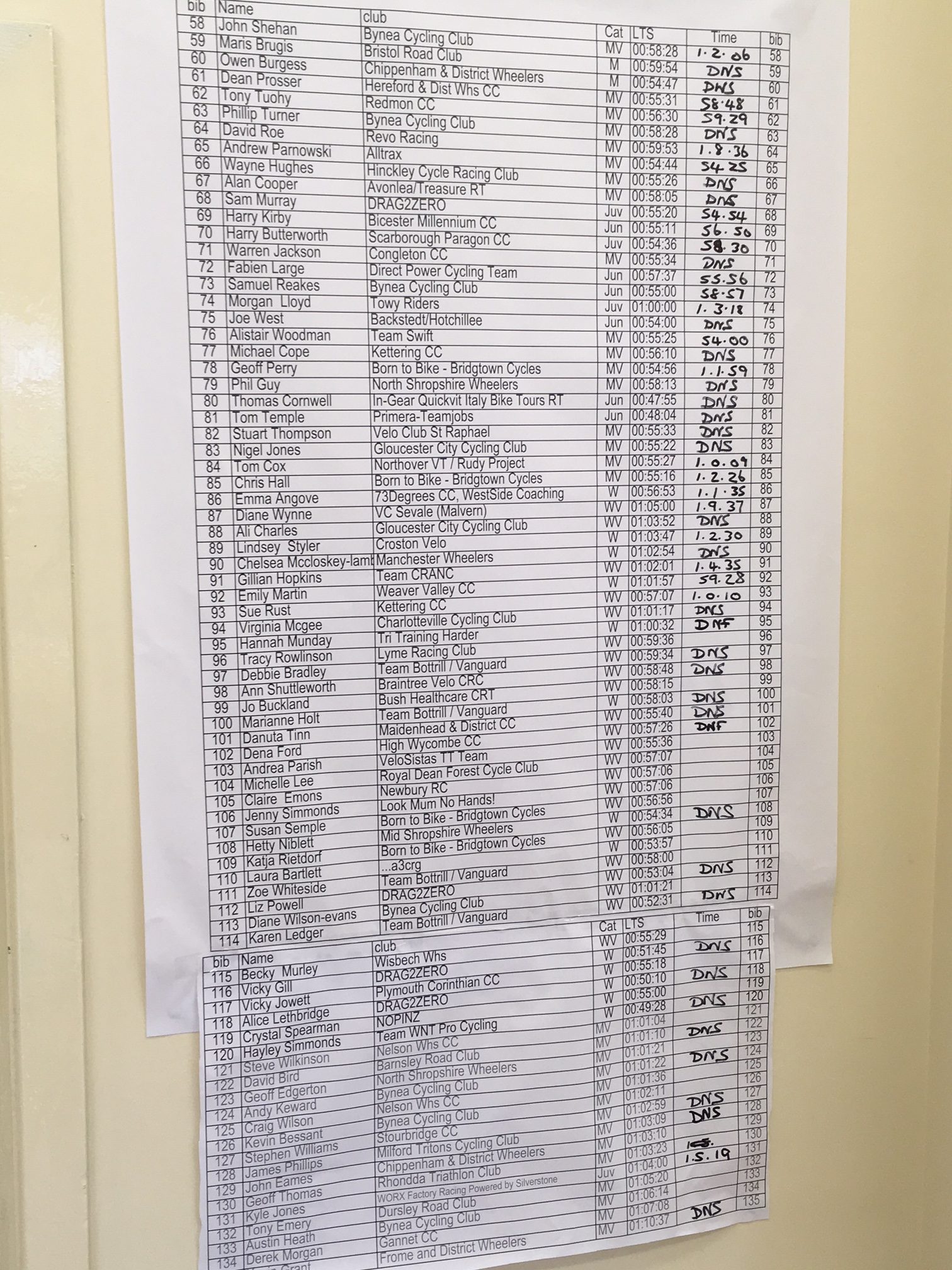