Bikes aren’t just training tools for battering each other with. They are a fantastic mode of transport for exploring new environments.  So, after a shortish tour around Lyon and the Vercors region of France last year, Ann and I decided to make a trip to the spectacular Picos de Europa mountains in northern Spain.  A number of friends recommended them so we thought it would make a decent circular tour based on SqueezyJet flights to Bilbao. We packed our bikes into cardboard boxes which we were able to leave at the Bilbao hotel for the return journey.  Getting a taxi big enough to take them was a little tricky but we managed to find one designed for wheelchair users.

The taxi driver – a rock climber who had climbed the Matterhorn twice – recommended a route out of Bilbao via the Vizcaya transporter bridge, so next morning we headed along the riverside promenade past the Guggenheim museum before emerging onto the road. 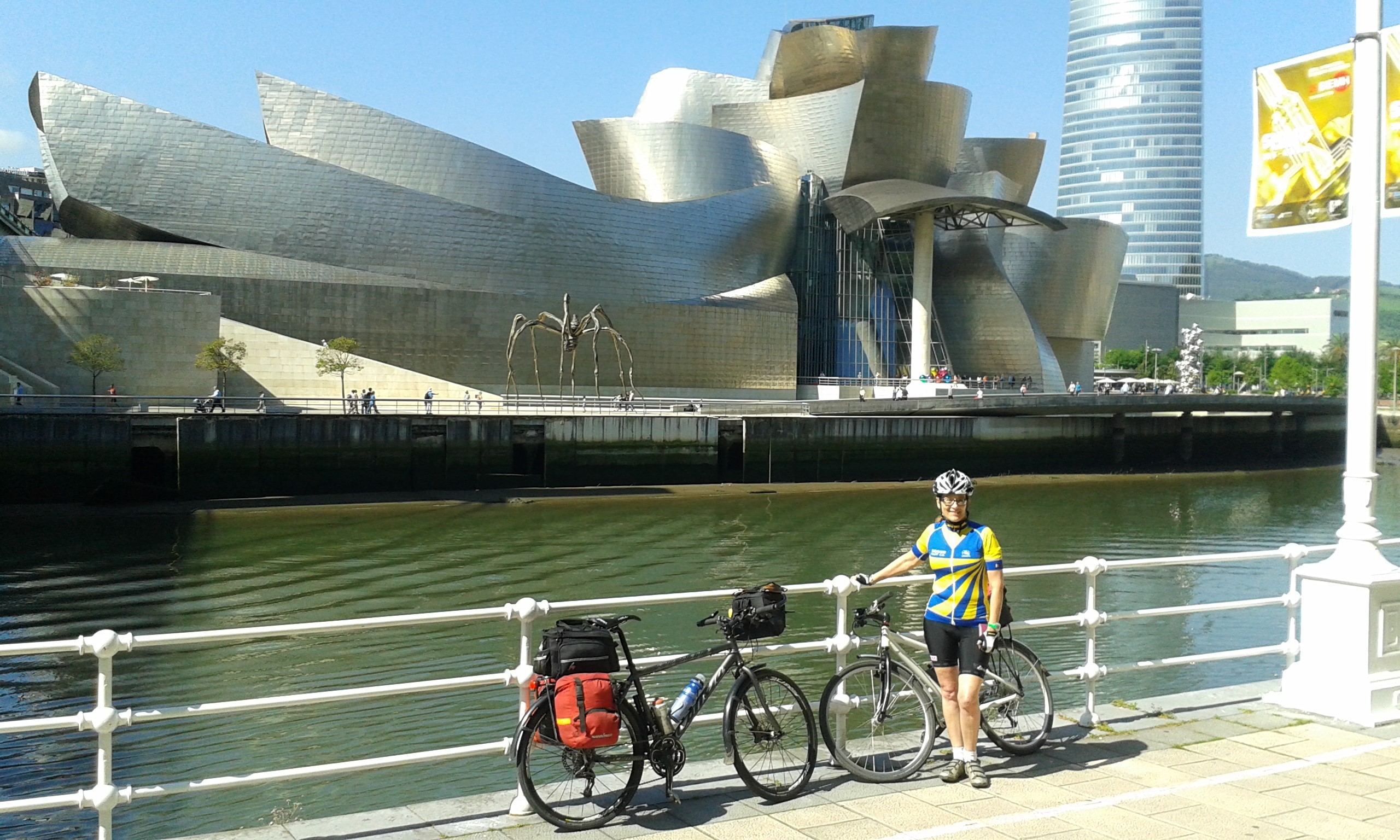 We saw lots of other club-type cyclists on the trip and they were all friendly and very helpful. Along this stretch we were passed by a chap on a Colnago going at a good pace. Ann got on his wheel and I sat behind her as he slowly upped the speed whilst thoughtfully pointing out the potholes and other hazards until we parted company at the bridge.

Heading towards the Biscay coast we picked up the Camino del Norte, a pilgrim trail heading to Santiago de Compostela in Spain’s northwest corner.  For around 15km it was a dedicated cycle/footpath complete with white lines which made for an easily navigated and traffic-free route.  After a delicious lunch in a beach café it required us to climb up 60 or so steps (about which we had been warned by a kindly passer-by) to continue the route along a disused railway line with great views along the coast. 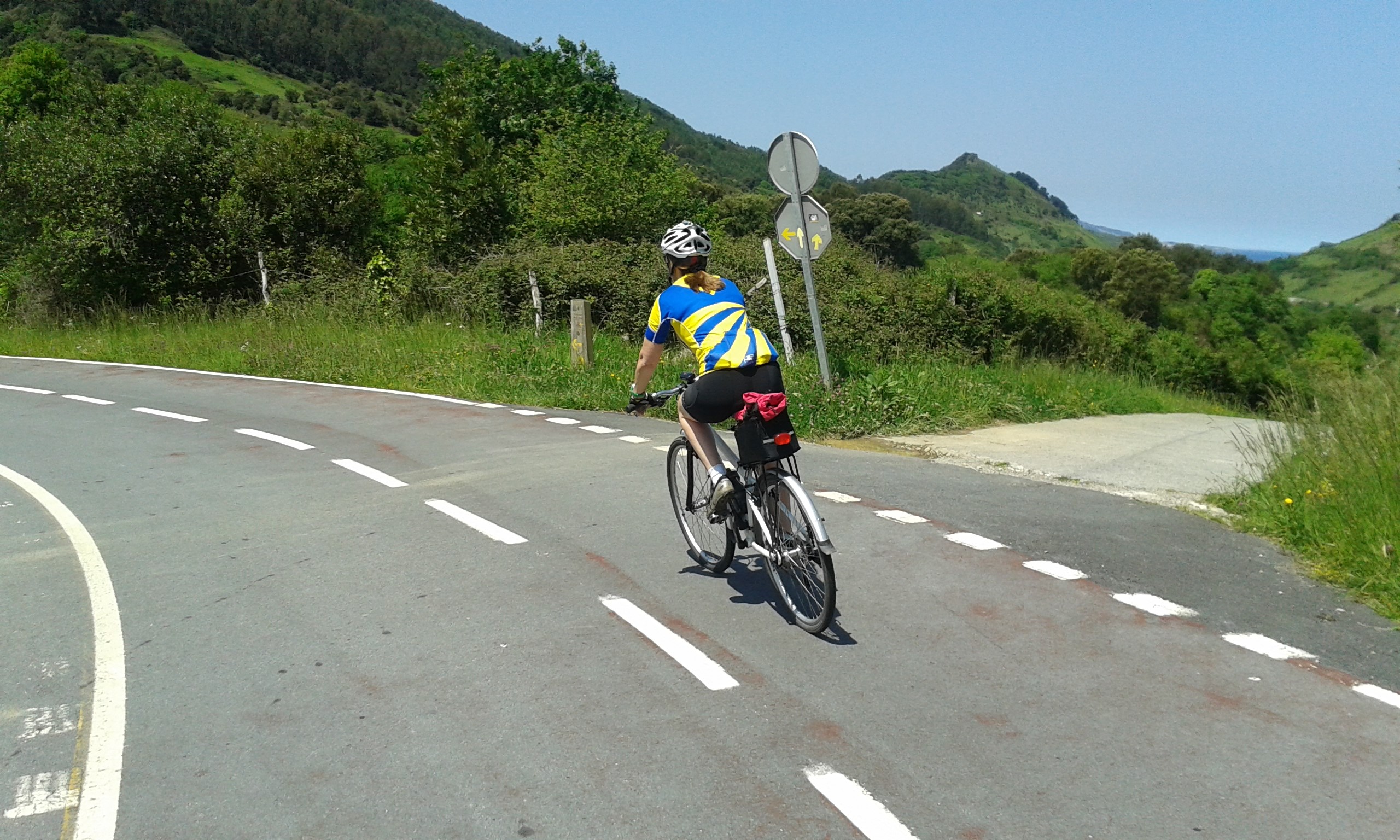 End of the first day we stayed near Santander, then on to St Vincente where we left the coast after an overnight stay and dinner in a fabulous seafood restaurant. This was our first view of the snow-capped Picos peaks around 25km inland. 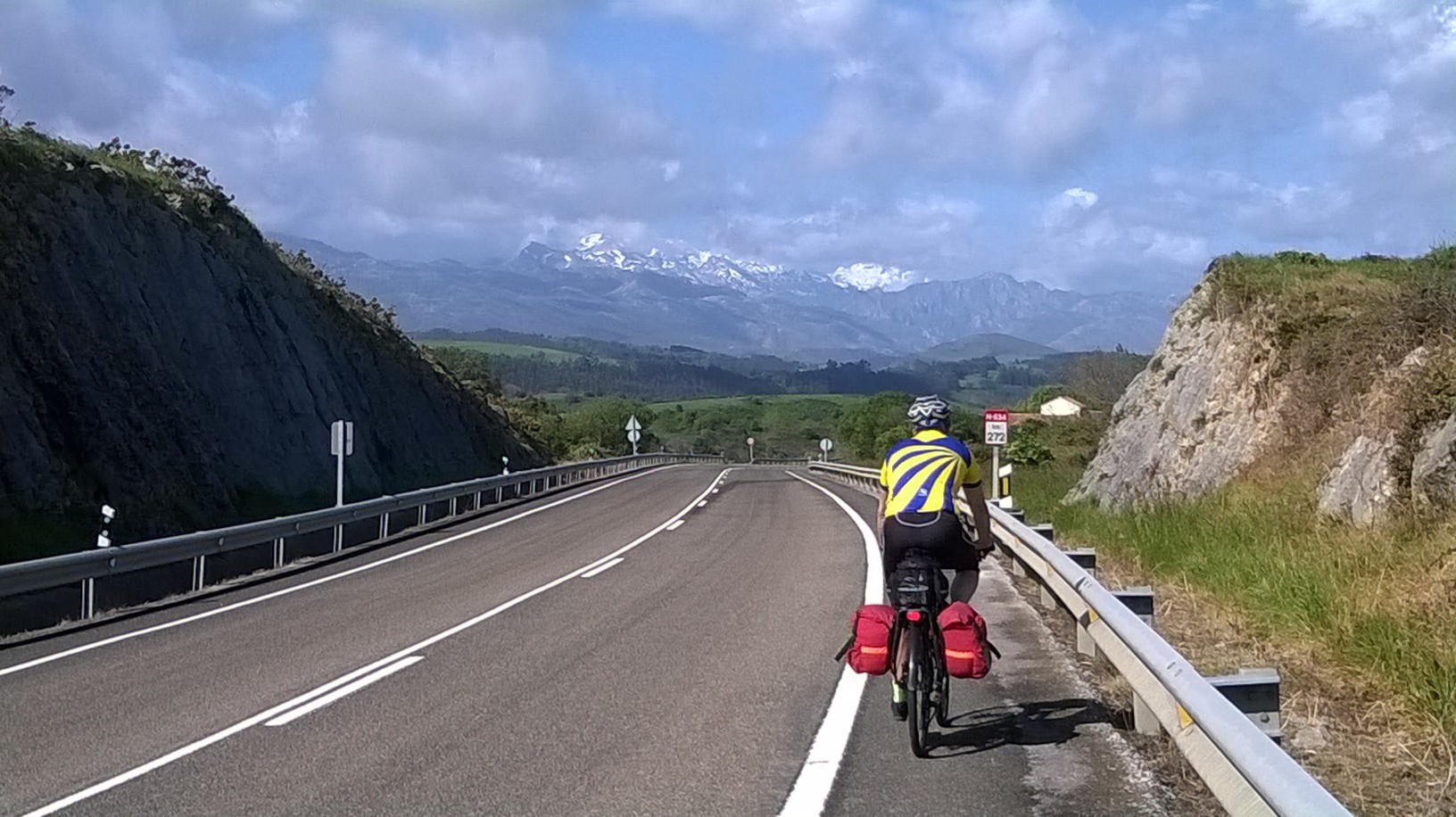 We stayed at a hotel right in the Picos at Las Arenas. They do lots of guided walking holidays and were good enough to give us a lift up to the Cares Gorge which we walked.  It’s a remarkable path cut into the limestone in the 1930s to access a culvert taking water to a hydro-electric scheme. 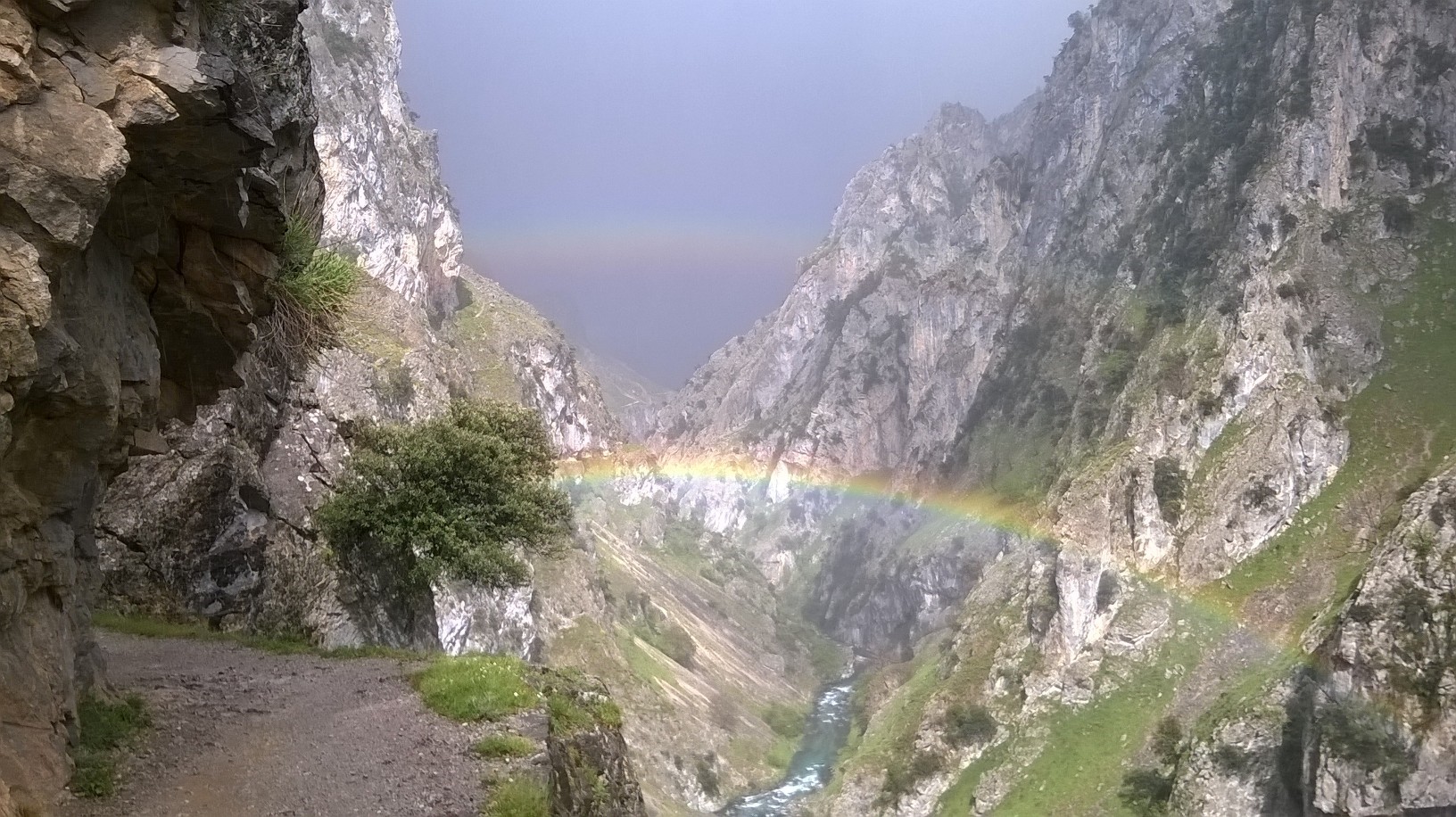 The area usually features in the later stages of the Vuelta with memorable hill top finishes at Sotres nearby and the twin lakes of Covadonga, which we rode to the next day.  Unlike the alpine climbs the gradients vary quite a bit, with some downhill sections and some of around 20% which were tough on a climb of around 1000m height gain.  The steep sections made it quite a hairy descent too. 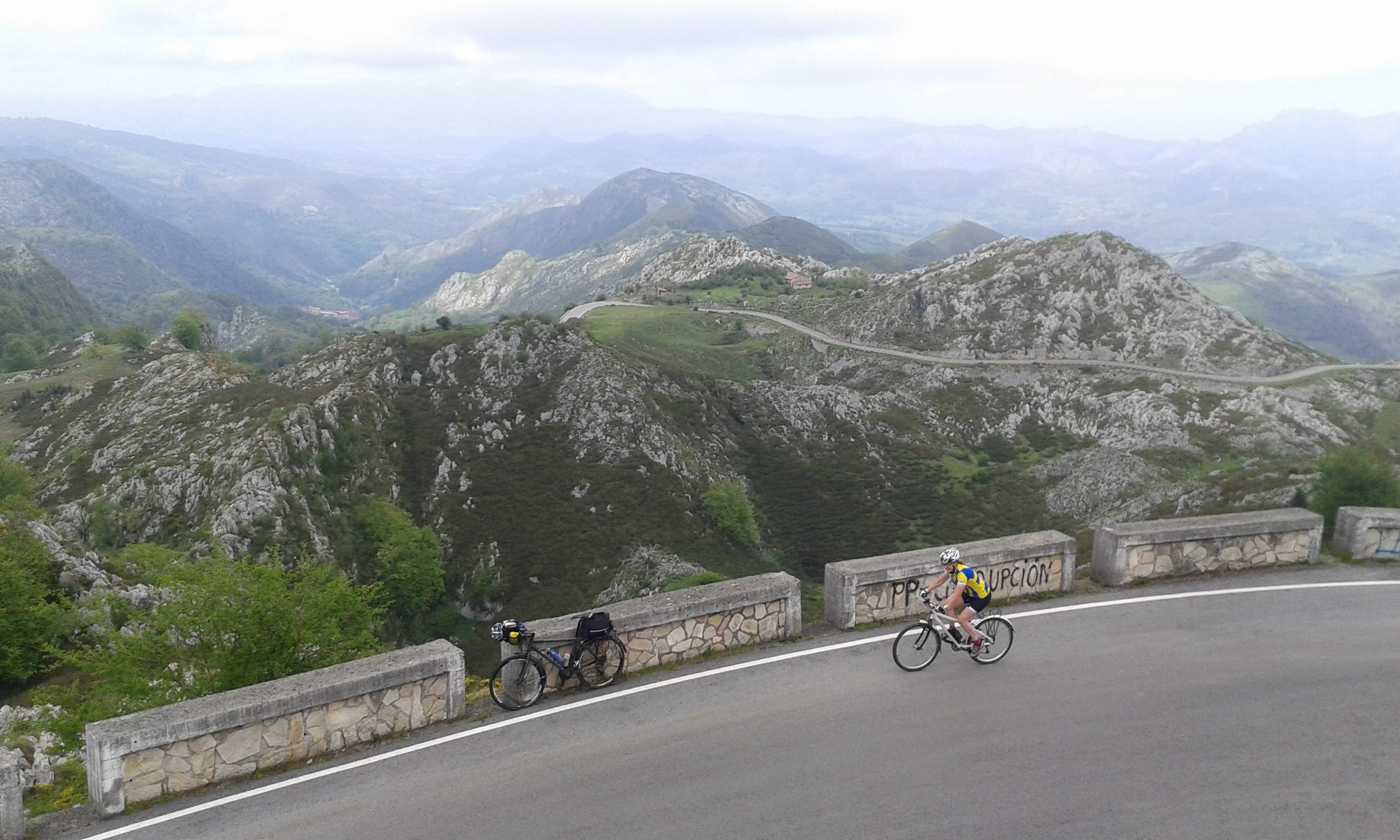 The next day we followed the narrow, winding gorge of La Hermida to the south eastern corner of the Picos National Park to another great small hotel in Potes, from where we rode up to Fuente Dé to take the cable car which whisks you up to 1900m for spectacular views of the surrounding mountains. 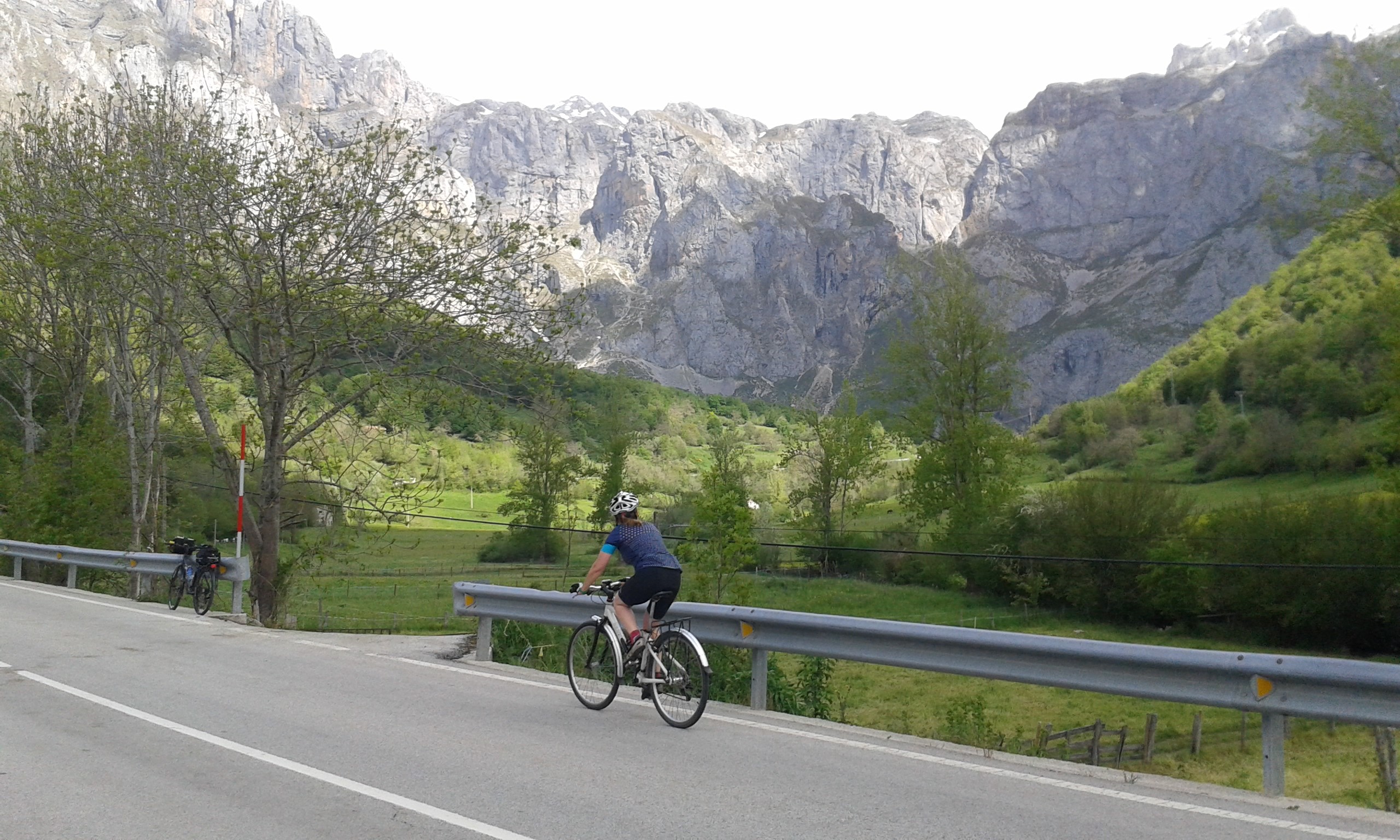 The steady climb up to the head of the valley at Fuente De and (below) the view of the highest peak from the top of the cable car. 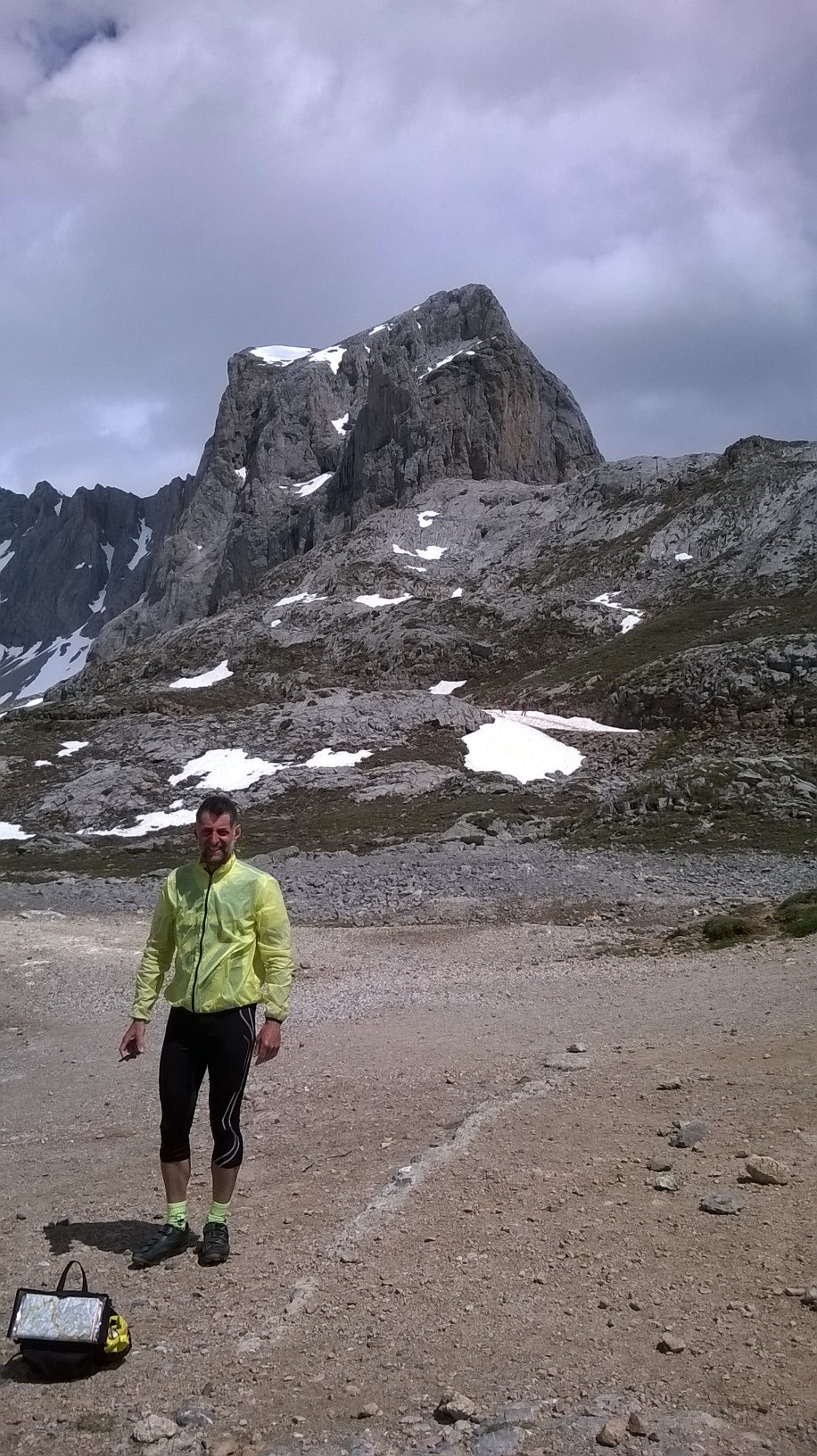 Fuente Dé is a dead-end so we free-wheeled back to Potes and as it was only 4pm I thought I would have a quick solo blast up the Puerto de San Glorio at 1600m – except it wasn’t really very quick.  Around 2 hours up and 35 mins back down.  A spectacular climb with lots of Vuelta riders’ names still painted on the road and well worth the effort. 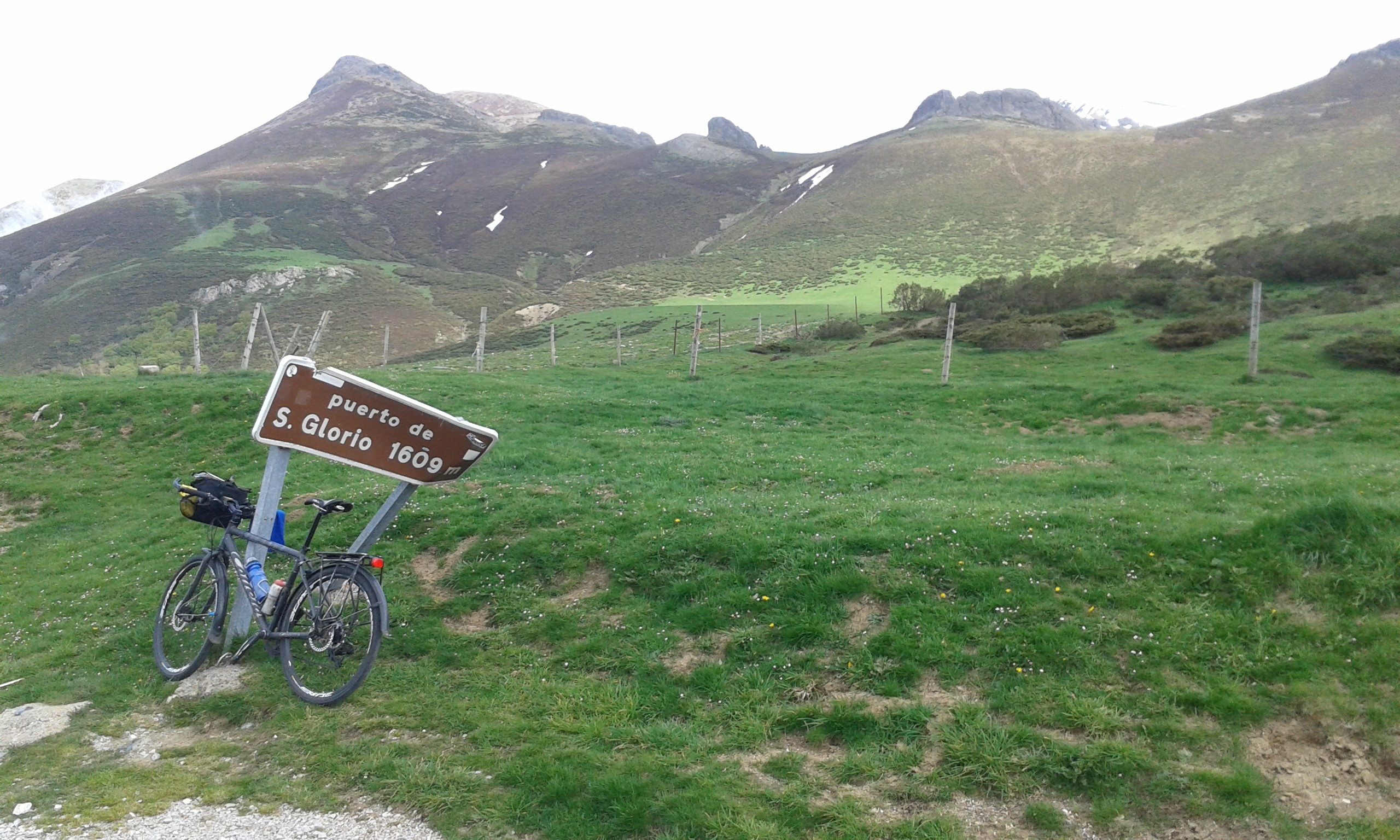 The following morning we headed south east towards another col which would take us out of the Picos and onto the plains of Spain.  I was still tired from the previous day’s exertions so grovelled on Ann’s back wheel all the way to the top.  Ann was pleased to be leading the day’s QoM competition. 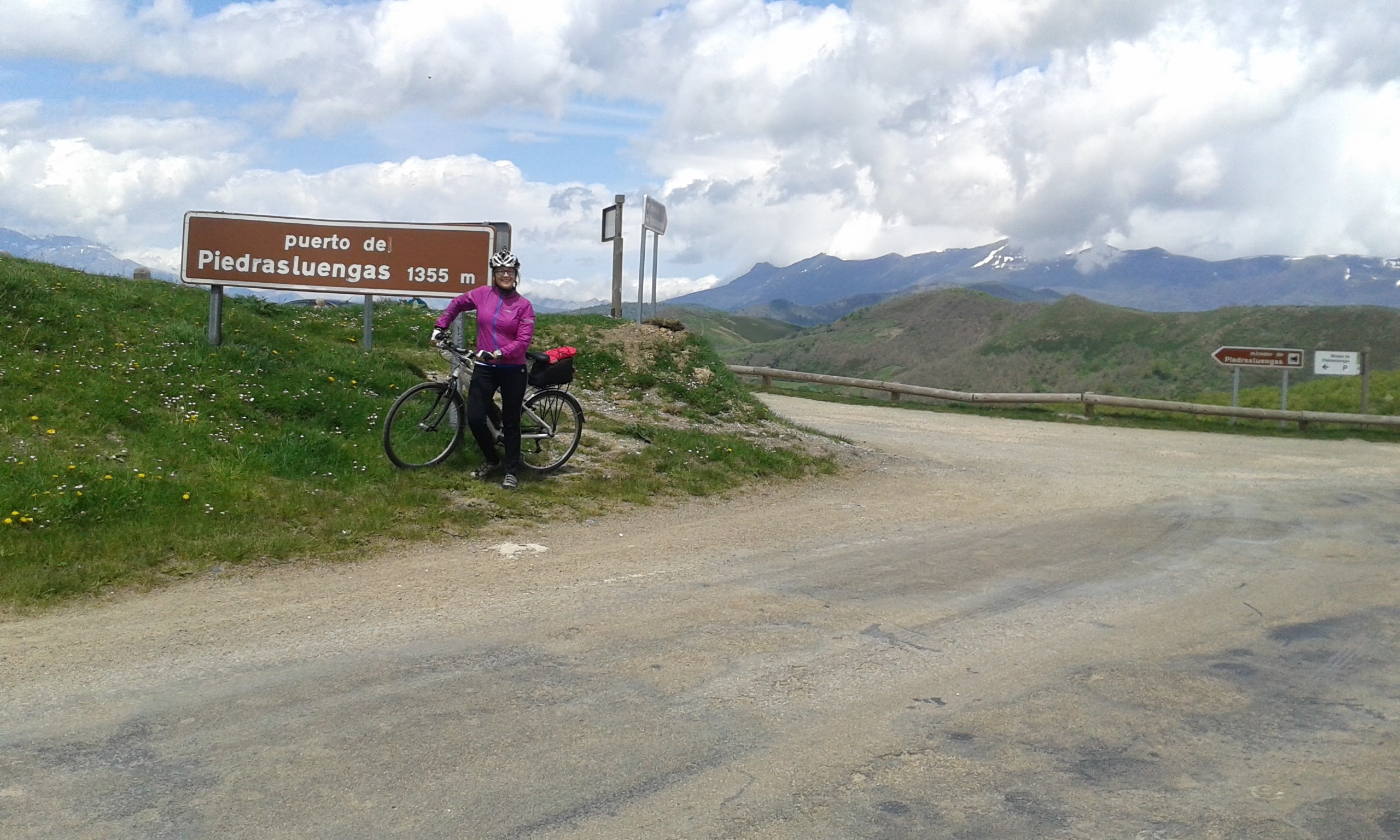 We were relishing the prospect of a rewarding descent but only lost around 300m before hitting the plains, where the scenery morphed into arable fields and lots of grassy meadows full of wild flowers with skylarks singing overhead. The snow poles at the roadside were an indication of the altitude and that conditions up here in the winter must be quite challenging.

We stayed the night in the small town of Aguilar de Campoo where Ann had found an 11-century former monastery converted to a hotel with interesting rooms which had the sleeping area up at mezzanine level.  Not ideal in hot weather according to the guide books, but we didn’t have to worry about that.

From here we headed east past the Ebro reservoir.  The Ebro river, despite being only about 100km from the Atlantic north coast, flows south east all the way to the Mediterranean.  Then we headed under some spectacular limestone escarpments with enormous griffin vultures soaring over them. 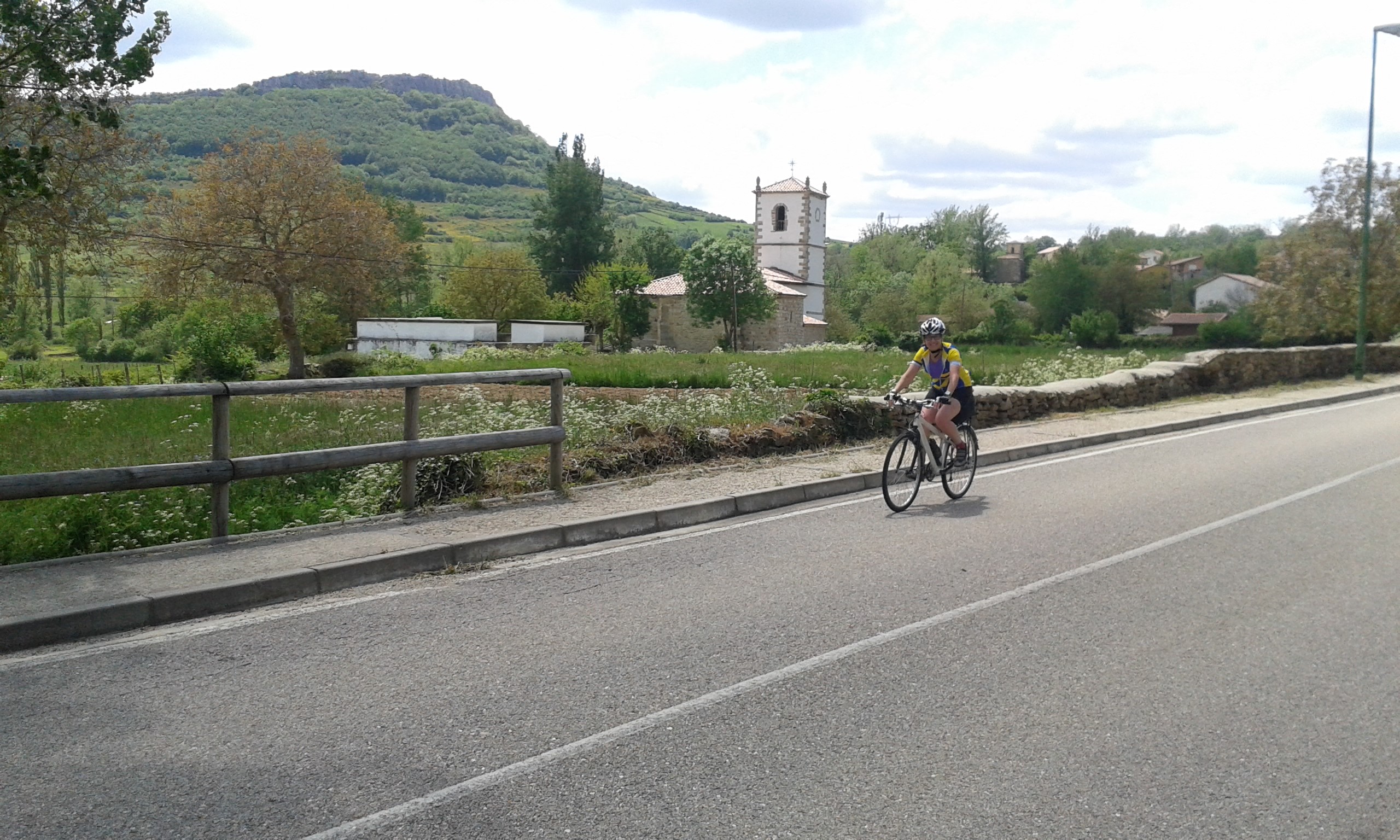 Our final night before returning to Bilbao was spent at a guest house in the tiny hamlet of San Pelayo run by an Englishman and his Spanish wife for the past 20 years.  Set in a peaceful garden, the welcome, décor and food were excellent, like so many of the places we had stayed.   We were still at around 800m so our final ride the next morning took us almost entirely downhill back to Bilbao.  It was Saturday so loads of other club cyclists were out enjoying the sunshine and all were friendly,  some asking where we were heading and had been.  We were back in Bilbao for lunch then a quick change before a visit to the Guggenheim museum. 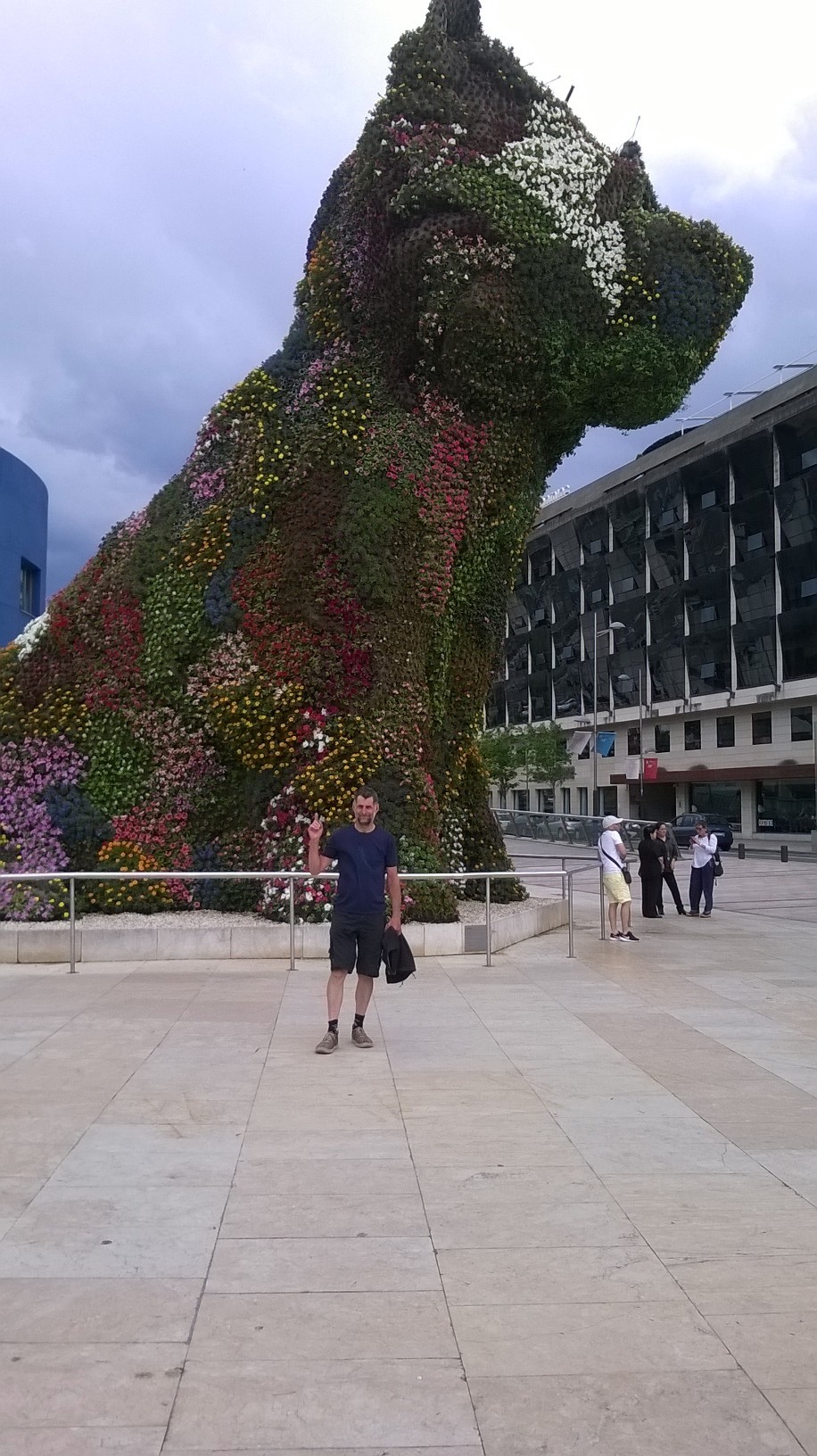 As you can see, I was overwhelmed by an enormous, flower covered scotty dog! The museum is well worth a visit though, not just as it is such a stunning building, but especially if you are into modern art.