No sense rider at the no Car Cafe

Last Sunday (that’s Sunday 12th) I was full of a cold and was not going to go out on the club run but then thought I would tag along and sit on the back, that would be better than staying at home. Unfortunately due to an activity generally known as ‘sodding about’ I left the house late. My progress further hindered by every red light possible I turned up at the club 40 seconds after the long run had departed. Never mind, pick a direction and head there, perhaps someone will have punctured and I can catch up. They didn’t head in that direction and didn’t puncture. So it was a couple of hours later I found myself above Higher Kinnerton, heading for Loggerheads on the blasted heath, surrounded by witches. I didn’t see Woody though. The wind was ridiculous, my legs weaker than a weak kitten’s, fighting the witches and the wind. Eventually good sense kicked in and I headed for beans and a spare at 2 Mills. I returned home after around 80 miles feeling completely hollowed out. The upshot of this jaunt was that over the following few days my cold got worse and the week was written off. Ah well, lesson learnt; don’t go out when you are full of a cold.

Move on to the following Saturday and I received a message from Matt B saying a few people were intending to head to the No Car Cafe and was I interested. In spite of still having a cold and not having touched my bike for a week I said yes. You wouldn’t credit it would you, I’m allowed to vote and everything.

Anyway we had agreed to meet at 9.00 at the 3 Greyhounds so at 8.30 I set off, creeping along, my rusty old legs creaking the cranks around. It was minus 2 degrees at this time but being wrapped up as I was I felt warmer than a polar bear in a sauna. At the pub were Jim and Matt and a few minutes later Mark and Paul G arrived. Woody didn’t come out.

Into the chill, Jim on his new bike, Paul with a new rear mech following his own travails last week, we took 5 minute turns at the front. It keeps things even this way, shares the burden, keeps the speed decent. Everything was OK for me until we hit the first tiny lump of the day near Macclesfield where I quickly went backwards. Regrouping in the town I, being of sound mind, said I would be cutting the day short and heading home. ‘Oh no! You’ll be OK when you warm up!, Just get up the Brickworks, see how you feel’. All stuff I have heard before and said myself to poor unsuspecting fools. And yet. I bought it. Our group headed  through Prestbury, (up the hill ‘Is John still here?’). I stayed in touch. The rise up to Bollington saw me distanced again, the problem being I could not get on top of it, could not get any power out, could not get my heart much above 160 where normally the high 170’s and 180’s is a sign of a fight. On the other hand Matt, Mark and Jim were all dancing away in the distance, Paul held back with me, he said it was because he was not going well but I knew it was just because he wanted to watch the suffering.

We went up the Brickworks climb, my diesel heart chugging me to the top about a hour after everyone else had arrived and of course at that point Jim came up with classic, ‘it’s mostly downhill from here’, of course I knew he was lying but went for it anyway, gingerly down the slippery road to Kettleshulme, up and down again to Whaley Bridge, me and Paul nearly getting very closely acquainted with the rear end of a Golf that stopped suddenly. The road to Chapel en le Frith is a draggy up and down stretch before the left turn up the final climb which is a few miles long and with a fairly consistent gradient which, when you are feeling good, represents a good test. Jim, Mark, Matt and Paul all disappeared into the distance. When you are feeling the Grim Reaper’s bony finger on your collar the climb is 20 minutes of purgatory.

The No Car Cafe is a great venue, being in the middle of nowhere it needs to be. As we had set off from home early we got to the cafe in really good time and were the only ones there. They do look after you, free coffee refills, excellent food and very welcoming. I encourage everyone to have a visit. Of course what you will have missed was me coughing my lungs up, shivering and feeling generally lousy. What fun. Matt also mentioned that he was intending to have a cramp later one. Extreme foresight to be able to schedule that. 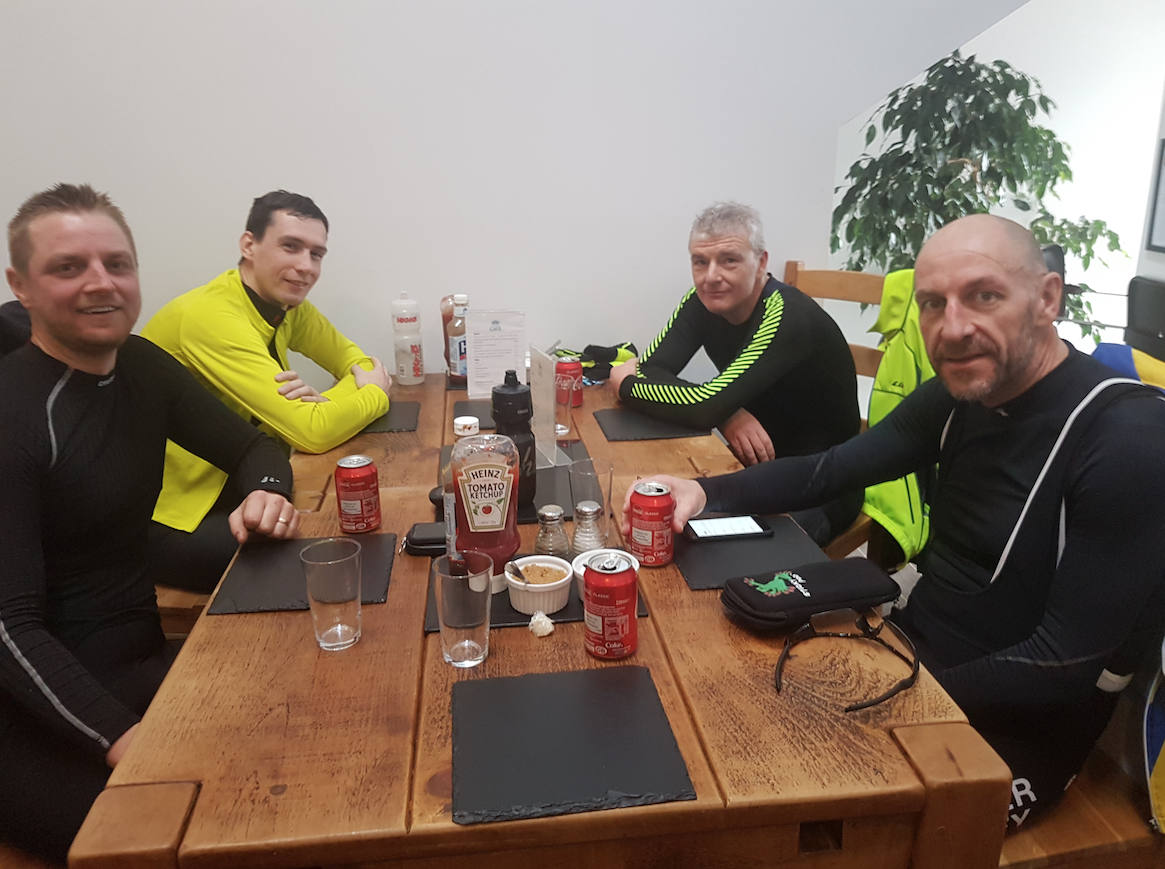 Time to set off and being aware of the long, cold descent after the first 5 minutes I put my cape on. Immediately coming out of the cafe there is a steep hill going up and people so often forget to get their gears organised before stopping which often leads to much mirth. No such luck this time with everyone being organised. The rise to the main road conquered, now for the 40 mph descent in to Chapel, my legs spinning out at 125rpm. Back to Whaley Bridge, you turn left and are immediately on to Long Hill. I was well warmed up by now so stopped at the bottom of the hill to take my cape off, the others grinding up at their own pace. Ian Stannard has been up Long Hill in 12 minutes, on Sunday it took me 26, puts things in to perspective doesn’t it?

Dropping down the swift descent to the dam in the Goyt Valley is always a laugh as long as a sheep doesn’t try to say hello. No such mis-haps this time, all safely down. Now the long drag out of the Goyt Valley and something strange happened. All day my heart rate stubbornly would not rise but now all of a sudden, heart rate up, some power in my legs, just behind Jim towards the top of the climb, a physiological corner turned. Matt on the other hand was having his scheduled cramp, Mark keeping him company. 50 yards behind me was Paul and further behind him was a chattering. All of a sudden Paul had passed me, ‘I was determined they were not going to catch me’, he said. They came past us after we had stopped to regroup and turned out to be the aforementioned Ian Stannard and another Sky rider, both on Pinarello F10’s with Crud mudguards, both of them chatting away like there had not actually been a hill there.

Regrouped, refreshed and cramps finished with we embarked upon the road up from Derbyshire Bridge to the Cat and Fiddle road and from thence down the Cat, Jim mostly on the front, me and Paul line astern, all very swift, me hanging on by my fingertips at one point. On the steep final part of the descent through the sharp bends I went on the front and a small gap to Paul opened, I ploughed on hard, hoping to get to the bottom first but was thwarted by temporary traffic lights and so we were all brought together for the final part of the descent.

Up through Macclesfield, the traffic lights being more compliant than usual and then back down the old club downhill course (much better than the new one). Jim was dragging us along with a couple of us doing very short stints along side him. Near Lower Withington we passed a guy. He was not happy and tried to barge in to our line at several places, nearly coming to blows with Matt. We were doing 22-23 mph but instead of sitting on he sprinted past, got 50 yards up the road and swiftly died a thousand deaths before being swallowed up and spat out, the effort and anger all for nought.

The flat roads back through Twemlow, Goostrey and Allostock were all taken easily and without event and all too soon I was peeling off and heading home. As usual an excellent day, another ‘epic’ one according to Strava. I returned home really, really tired, runny nose and coughing. Ah well, lesson learnt; don’t go out when you are full of a cold.

As a post script I went to bed at a reasonable time with all the usual aches, feeling tired and slept like a log. On Monday morning however I could not bend my right leg at the hip. To get out of bed I had to lift my leg up and help it over the edge. Standing is not so bad but sitting is not good. Weird, something that has never happened before. It’s Wednesday morning now and although things have eased up somewhat I am still walking like a broken spider. Can’t wait for Sunday.