We had a good turn out today, with about a dozen setting off for the long run into the hills, and the rest of us heading in a large group of 20+ to Wheelock.  This group was a bit too large for even the most sympathetic drivers, so we split up again just before Goostrey.  The weather was beautiful for once and we enjoyed the Cheshire lanes at their best: horse chestnuts in blossom, late bluebells, and the grass verges looking green again: all particularly appreciated, after such an Arctic winter.  We rode fairly swiftly, via Swettenham and Astbury, but the pace was steady enough to allow for plenty of chat. 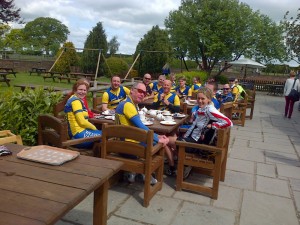 We sat in the sunshine at the cafe (at Wheelock) and sang a poor rendition of “Happy Birthday” to Elaine, whilst scoffing cake.  I rode back with the second group and we kept together well, on quiet lanes through Middlewich.

This had been advertised as a suitable ride for beginners, and it was good to see lots of new or “nearly-new” riders out.  I did try to collect names for a name-check but have probabably failed miserably – anyway amongst the newer riders were: Andy, Graham, Paul and his son Connor, Mike and Mike, and Steve (a pal of mine whom I’ve been trying to persuade to come for several years, and at last have succeeded!).  We had five girls out – me, Nicky, Nicola, Elaine and Sheila; alongside Nicola, two other juniors, with Will out as well as Connor; and lots of riders who are neither girls nor juniors, or at least, I don’t think they are: Graham, Dave, Garry, Woody, Ady, Tim, Richard, Ian, Craig, Jed, Derek, “Spanish Jim”, a few others whom I just can’t recollect at the moment, so please don’t be offended – and last but not least, our leader Alan, who somehow manages to keep everyone together – thanks Alan!  I should also report two Weaver Valley rider sightings: Jane and Rob near Kermincham, and Richard and Della on their tandem, near Hassall Green.

I didn’t have my computer with me but from talking to others, think we did something like 45 miles at somewhere above 16 mph, which isn’t bad going for such a large group, and we had NO stops for punctures or mechanicals!