I believe Syd has been bitten by the challenges, and vituals, that audax provides and I believe he cajoled me into entering my second 200 of the merry month of May only 6 days after the first. I don’t think I was dreaming when he picked me up to drive to the start at Broken Cross. I almost felt like a pro driven to the start in the team car.

I am sure he tucked into the various pastries available for the breakfast before the start. Before the off I realised my helmet had not been packed by the team driver. Clearly, good staff are not available before 8am. The route was out to Davenham then on to Chester via Waverton so I decided to make a small diversion to pick it up. When at my garage I think I saw Syd behind the car parked on the drive. The first control was Rose Farm so a coffee break was had. Imagine my surprise when Syd was definitely there, wanting a cup of tea.  From this brief stop it was on into Chester and The Blue Moon. Blow me there was Syd again wanting feeding this time.

Once fed and watered it was out to Mold, following part of the Llanberis route. Control at Mold Tesco and the elusive Syd was there again. He nearly had his uses as I had mistakenly failed to upload legs C and D to the GPS “Go Pedalling Somewhere” device. The apparition said he had these sections and he would lead. Well by the exit of the Tesco roundabout the spectre had gone, nowhere to been seen in front, and I was back to using the paper route sheet. Through Eryrys,  Rhydtalog and Gwynfryn I followed the directions to the turn to World’s End. It was a tough climb into a strong headwind. Head down, I began to gain on some riders who had set off at faster pace and I thought some blue and gold ghosted past me. Just over the top, and in the forest, the organiser had parked up his VW camper and was handing out butties, cake and brews. There was Syd, butty and brew in hand. 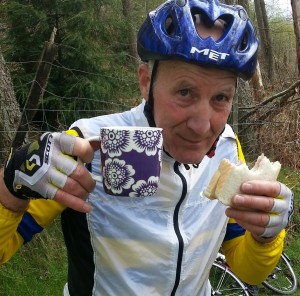 After refuelling, the descent was tricky and the ford crossed on foot. Then it was a bit rolly to The Prospect Rooms at Garth. From there I seemed to have some wind assistance through to Plassey. Another brew and another receipt required and blow me he was there again. He needed “cream” but not a cream tea. Over to Bangor on Dee and I opted to go over the dual carriageway and cobbled bridge. I heard grumblings from rear about the cream now being spread too thin by the cobbles, or was it around the cobbles.

On to the Malpas “alps” and then to Crewe, via a mixture of roads and cycle tracks. Unfortunately we witnessed one of our number being stretchered into an ambulance. Looking at the route sheet he failed to spot a bollard. End result split head, he was not wearing a helmet. I guess he might next time.

At the edge of Crewe I needed to refuel, stopped, propped up my bike and there was Syd. Asking for a gel from his back pocket. How did he get there?

Final push through Sandbach and to Swettenham via a very dodgy gravel path with 3 gates. I think Syd went through all of them without opening one. How did he do that?

Eventually I was back at Broken Cross at 8.30pm closely followed by Syd. It was hard to drag him away from the cottage pie and Apple Strudel and custard but he did eventually drive me home.