5 April 2011 Written by admin
We couldn’t have wished for a better weekand, just a better turnout! Kev C and I had a brilliant time on Saturday riding over the Long Mynd 5 times in total. Each descent from the broad grassy ridge was better than the last, this was the third one down towards Bridges 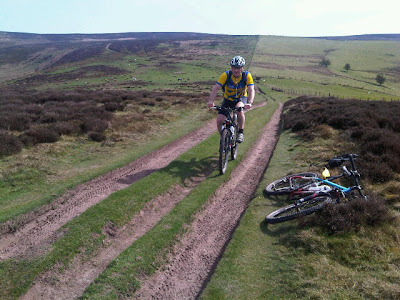 where we planned for lunch, but the pub has closed down, so it was along the road to the Inn on the Green at Wentnor which did us proud. We found the flowing grassy track at the northern end of the Mynd which Gareth had tried to show us last time – it was superb. And finally, after a gruelling climb of Carding Mill Valley, we rode back along the ridge to the gliding club and the famous Minton Batch which was even better than I remembered.
No one showed up on Sunday so I rode over to East Ridge in the sunshine. There are some good singletrack trails, only trouble is that it’s a bit like Delamere in that you have to know where they are as there isn’t much in the way of signage. 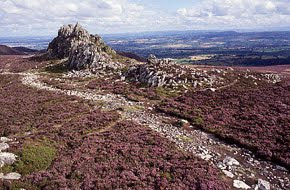 So I headed for the Stiperstones (which look like this – in August at least) and then back over the Long Mynd, trying the Minton descent (parallel with Minton Batch) which was a fantastically fast, grassy ridge ending up within a mile or so of the campsite. Will definately have to plan another trip here.