Loggerheads with much perspiration and many Jims

Saturday night was the last night of the play my wife has been in, ‘Last of the Summer Wine’, not described by reviewers as, ‘a towering, emotional, epic, triumph’. Paula was excellent though. The play finishing was important (to me) as it meant that for the first time in ages I was able to go out on a Sunday club run.

Sunday morning and I resisted my daughter’s entreaties to play ‘Hotels’; basically me making breakfast in bed for her and her Mum. No, I concentrated on getting out of the door in good time. My pre-ride routine is always standing outside, breathing in the weather and deciding on the best combination of clothes for the day. ‘Ah, freezing day today, just a bit warmer than yesterday’, I thought. It must have been because I was still emotionally wrought from the previous night’s play but I got my clothes choice very wrong, putting on my heaviest vest, heaviest jersey and gilet over the top, heaviest winter gloves, overshoes, socks….

Waving my goodbyes, I set off into the still air and in no time I was soaking with sweat, it was pouring off me at an alarming rate. Never mind, it will be OK. I soon arrived at the club. What! No one there! Not a single cyclist to be seen. I can’t be late surely!? Oh, no. I’ve arrived at 9.25! Club meets at 10.00 in the winter. You plonker Rodney. So I set off and did a ½ hour loop instead of drowning in my own perspiration.

Back at the Club and Colin Walsh confessed he had also overdressed and so the 2 of us were in our own little Sweating to Death All Day Club. Colin said we just needed to pray that the sun didn’t come out.

There were not many takers for the ride to Loggerheads, Jules, Jim D, Kevan, Paul G, Carol, Colin W and myself. A shame as it was a great day to ride out to Wales. I was interested to see Jim’s new pre-ride routine, kissing the tarmac outside the club-house. A bit like the Pope when he lands in a new country i suppose, blessing it. We picked up Matt Ellis just after Delamere and the whole group rode well together, taking turns as necessary until Kev was good enough to allow us a break while he fixed a puncture. We would have all helped him of course, nothing to do with getting cold, dirty fingers, just that he was doing such a good job we wanted to watch.

Carol peeled off at Christleton to go watch balls being kicked and we then went through Chester and out towards Kinnerton. A comfort break was called for followed 100 yards later by a nourishment break. I was expecting a break just for having a break but that didn’t happen. What did happen though was the sun came out. Oh joy. I was already drinking more than a Glaswegian at a free bar and was running out quickly.

We went up the long drag past Treuddyn at a very nice pace which was being set by Matt. I was so hot at this point that my gilet, jersey and inner jersey were all unzipped with just my vest between me and the elements. At the top of the hill there were unfortunately no takers when I suggested going up the Old Bwlych and so we descended to the sanctuary of Caffi Florence. It was on the way to the café that Kev mentioned that he only knew one Jim. It was pointed out that he knew many Jim’s; Carey; Morrison; Jim Reeves…. You had to be there I suppose but it kept us amused. Caffi Florence, a great café, one of my favourites. Not Paul’s it would seem as he only had a coffee. Perhaps the day to that point had been so easy he didn’t feel the need to take any extra calories on board? 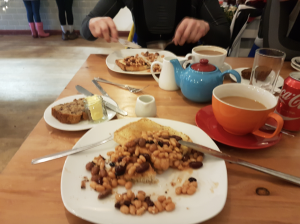 In the cafe there was a heated discussion on the merits of Tunnocks Teacakes. There were 2 distinct camps; pointless and manna from heaven. My contention is that the Tunnocks Wafer is a far superior teatime treat. Discuss. 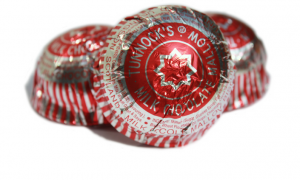 All too soon lunch was over and again there were no takers for going a slightly different way back. Instead what was mutually, telepathically agreed, as so often happens, was that we would go back at a ‘decent’ pace. We all took it in turns to keep the pace up as we went a totally direct route home, through Chester and straight along the A51 with Colin putting in a particularly strong turn over the hill at Tarvin. This happened just as I got a bad cramp in my left thigh, a result of extreme dehydration through all the sweating. I don’t know our average speed from Loggerheads back to Delamere but it was ‘decent’.

By the time we hit the forest however the telepathy again kicked in and we all slowed and no one seemed to have the heart for a sprint at Hatchmere.

One by one we all went our separate ways. After going through Northwich I decided to put in a little extra loop so got in just as it was going dark with slightly over 100 miles for the day, tired legs and feeling dehydrated like dessicated coconut. Again, as always, a great day.