Firstly, without any further ado, or leaving it as a footnote, a massive, massive thanks must go out to Graham and Ann, who have worked up to this weekend, and throughout it, to make sure that all riders were safe and sound. From beginning to end, they have selflessly looked after us all!

So, what went on?

We gathered on a sunny but windy morning at Moss Farm, with much of the banter one might expect from those opting to culminate their winter training with a weekend of pain and suffering/enjoyment* (delete as applicable). 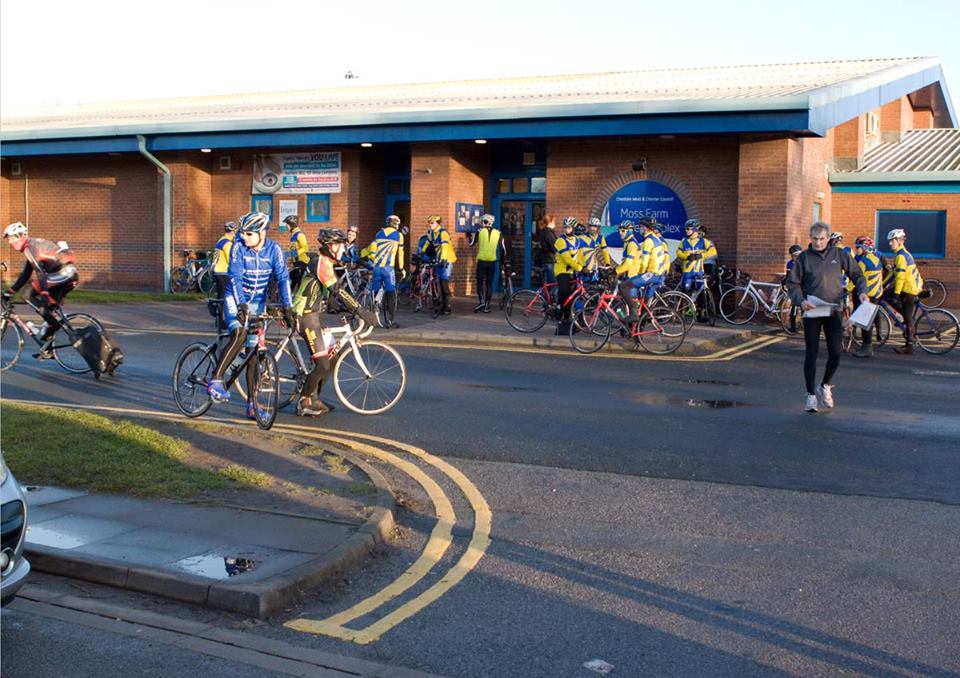 A gathering of masochists

From here, as is traditional, we split up into two camps – those who would become a Grupetto of sorts, tapping out a steady pace, and those who would use it as a fast and intensive training effort. (Not being daft, I opted for the former!). 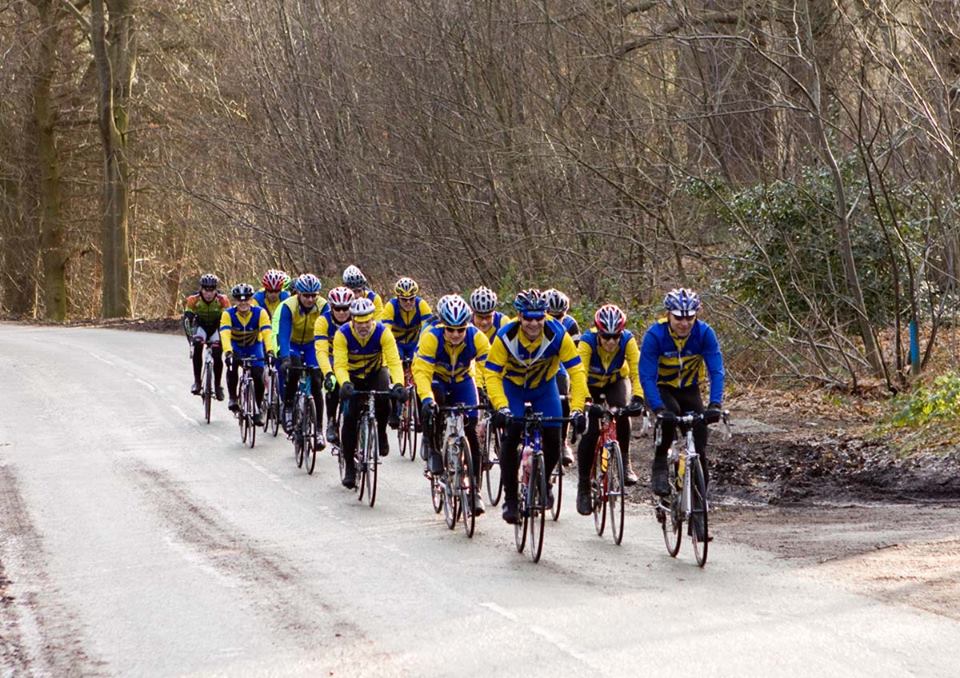 The Grupetto goes forth.

Off we (Grupetto) set and set a steady 16mph average pace all the way through Chester, into the wind (at which point the faster guys breezed past), which was steady and strong. We all kept together through Kinnerton, and Penyfford, and then began the real climbing through Treuddyn, through Llandegla. We picked it up a pace and a bit as we descended into Ruthin, battling downhill into the wind at 25-30mph and to the craft centre. 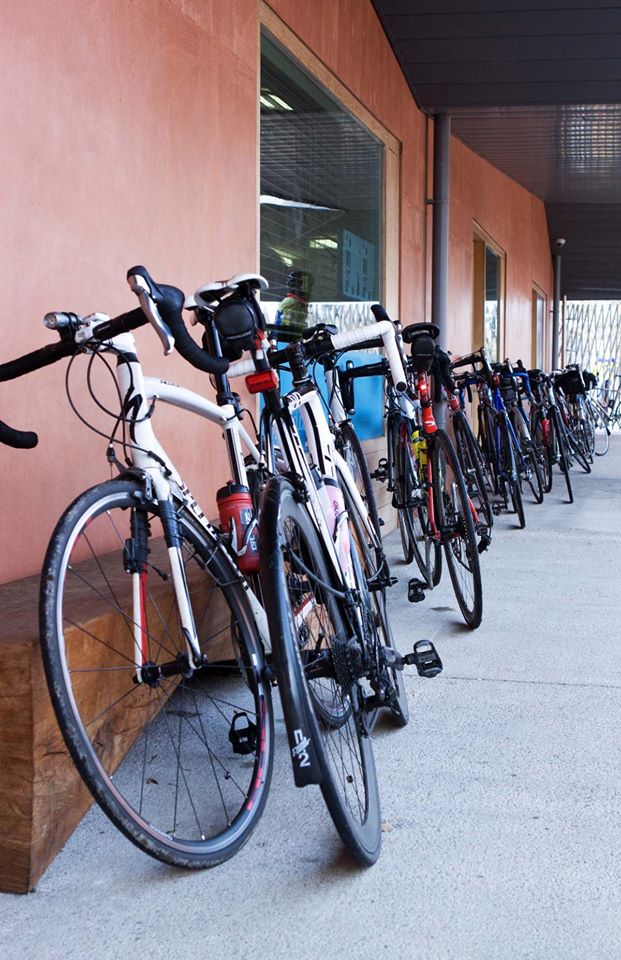 Cycles outside, cyclists inside. Not a pretty sight, a bunch of hungry cyclists. You're best spared.

After the cafe, the main event. Almost en masse we set off and headed for Denbigh. Again the wind did not relent, but we pushed on up Denbigh High Street, and on over Denbigh Moor (the infamous ‘Sportsmans’). Groups formed, and pain was felt.

Unfortunately, at this point, my observational story runs out, as I had made the mistake (schoolboy error!) of putting a lot of effort into the 0-50 miles mark. This meant that, no matter what I did to keep on with the adequately steady pace of the group, I dropped off the back!! Aargh! What followed was time in a very dark place – character building one might say, as from mile 62 – 95 I found myself overtaken by a few yet overtaking no-one! A slow grind into a hiorrendous headwind all the way over the moor, down to the A5, and then only a slightly faster pace set through Betwys-Y-Coed, and up to Capel Curig. At this point I was too tired to pedal, but didn’t want to stop at the Pinnacle for a brew (for fear of not starting again). I plodded on through the even windier valley with one other for silent company in single file and grunted my way up through Pen-Y-Pass, for the long and filled-with-great-relief descent to the hotel. A brutal day for me, and many others too. 95.28 miles on the clock. Up to 107 for some, and 153 for Dave Fearon, who had once again decided on an ‘alternative’ route! 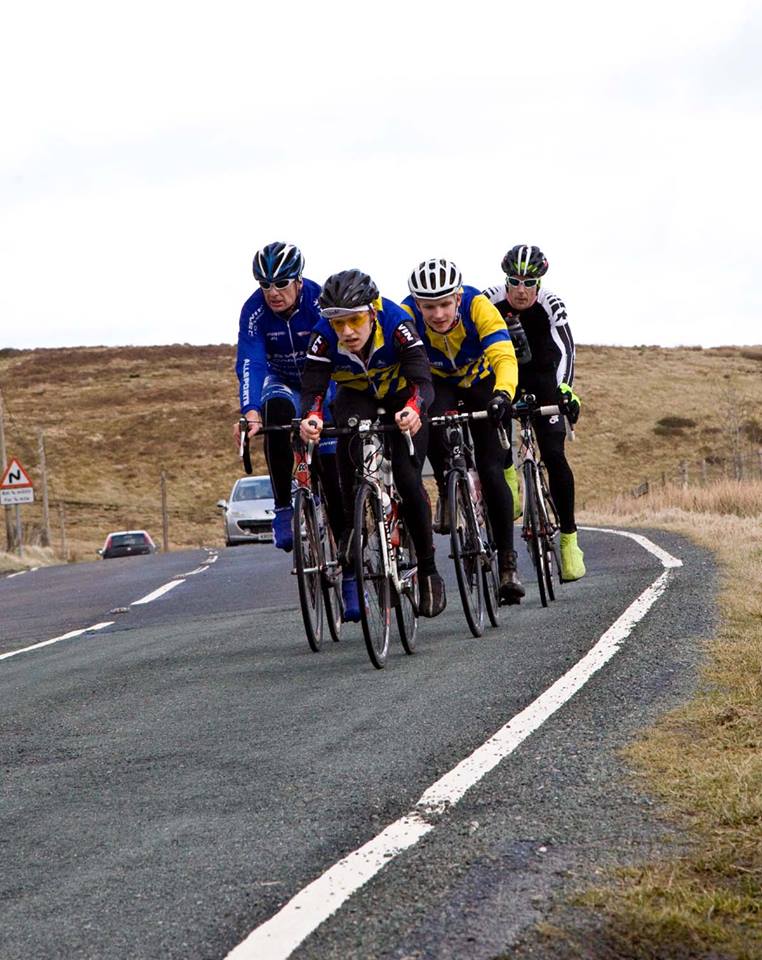 The fast men attack the Sportsmans.

The hotel was great as per usual, and recovery came with the rest in the bar and a couple of pints! 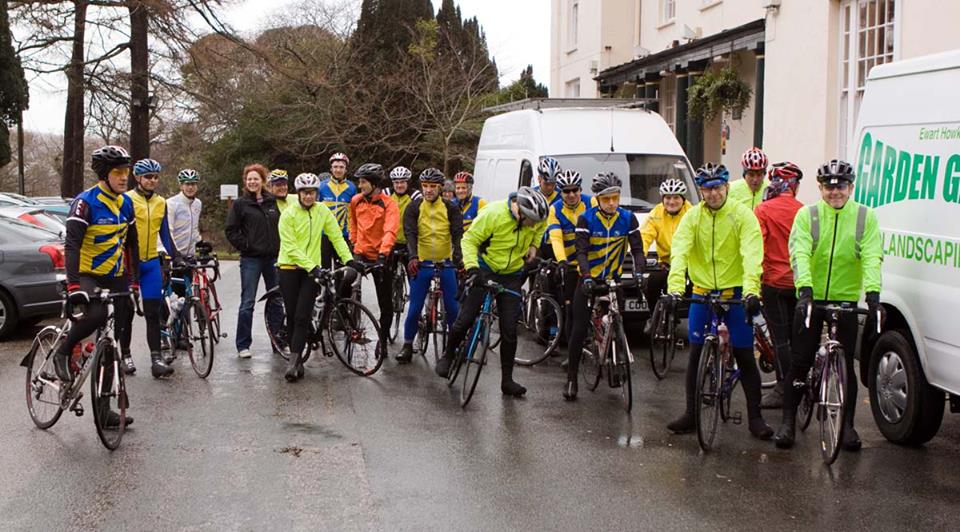 A wet group of lunatics prepare for battle.

Many had a sleepless night listening to the gusts of wind battering the hotel, and we woke up to wind, with strong (60mph) gusts, driving rain, and general weather that would make you happier with a turbo session, or a couple of hours in bed!

Pen-Y-Pass was a battle-royale. The wind was hideous, and gusts had people leaning into the wind and reaching for the granny gears, ducking behind dry stone walls and avoiding dry stone walls as the wind attempted to thwart our efforts. Fortunately, most made it to the top, with only one mechanical casualty on the way up. 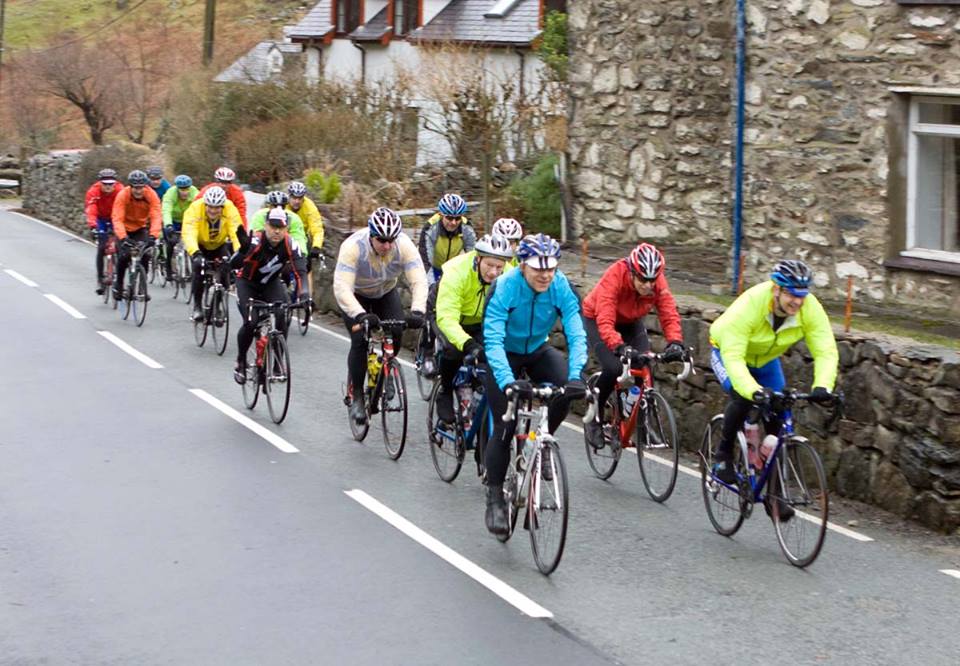 After the Pass came a fantastic descent and a monstrously fast tailwind driven run across the valley to the junction at Capel Curig. Pedals spun, and people ran out of big gears. This did a lot to cheer many up after the gruelling climb.

The further and windier descent into Betwys-Y-Coed gave us enough to keep us focussed and get ready for the long climb out.

We climbed out of Betwys-Y-Coed on the A5 where the weather challenged us again. Strong sidewards gusts gave us a battering, and driving horizontal rain attempted to chill us. We weren’t giving up.

At Cerrigydrudion we turned up towards Colcaenog forest and gained a tailwind to assist us all the way to Ruthin.

Re-fuelled, we ploughed up the hill out of Ruthin and careered headlong through Loggerheads towards Mold. What was then a perfectly rhythmic and steady pace ensured that we all kept together. Chester was a welcome sight, and we shot through there and Tarvin and eventually turned towards the forest.

Some legs were now getting tired, and there didn’t seem to be much enthusiasm for the usual Hatchmere sign sprint. At this point, a young Mr Crute suggested that someone should drop in front of him, as he wasn’t going to make a move. Suspicious I thought, and suggested that this may be a ruse for an imminent sprint. I was right, at about 800m to go, young Crute shot out from the ranks followed by others, and the sprint was on. I was boxed in, expecting Wood to go, but I had the legs and was ready to jump. I shouted forward for those to move to let me through, then made, what some might deem an ‘aggressive’ move to gear up and drive forward (good job there were no commissaires!). Fortunately I was right, and the legs had it, and subsequently I had the sprint for the sign! ‘I couldn’t help myself’ said Crute, later about his non-surprise attack.