My Mum, bless her, has bad osteoporosis, she is shrinking by the day and has been doing so for years and years. Nearly 4 years ago my elder sister insisted that, as Mum’s condition was not good, we should all get tested while we were still young enough to give the professionals time to sort out any problems. My 3 siblings and me all were tested and as if by magic it was me that drew the short straw. As well as a barely there left hip I was told I have the lower spine of a 90 year old woman, I wish she would come and get it back. So here I am 4 or so years later and I have been tested and scanned and prodded and poked, I have had buckets of blood drawn which has been analysed for every condition you could think of and many you could not imagine. X-rays, scans, more scans, more x-rays, try a different hospital and get scanned there, go away awhile and get scanned later. Eventually all of the experts seemed to agree that indeed my spine was as useful as a chocolate teapot, they also agreed that they didn’t know why. As a result of this and my insisting that, after 4 years. the experts should do something about my condition even if it amounted to just telling me to go away and never darken their door again I have finally been prescribed something. Alendronic Acid is the poison of choice with a list of possible side effects as long as the Bayeux Tapestry. I have to take 1 tablet a week for the next 5 to 10 years. Based on my first week’s experience I am not particularly looking forward to all these pills. You take it first thing in the morning, before food and with a large glass of water. You stand up while taking it and stay standing up for the next half hour. In spite of this, 3 hours of Saturday morning still saw me feeling sick and with a bad stomach and bad head. I suppose this will be better than the alternative. Roll on Saturday mornings. We all have our crosses to bear.

Saturday was a perfect day to be out on the bike and me and everyone else hoped that Sunday would deliver the same. It didn’t. The weather first thing was dry but it looked like a wet morning was on the way and so at our temporary meeting place in Davenham riders turned up in every conceivable combination of clothing, some people going for the full winter, myself and a few others going for the summer style with riders sporting every shade in between.

We have a new guy, Richard, welcome Richard. Last week was his first ever ride in company. He went on the short and very flat run to Dunham. This week he was convinced by someone, no idea who, to come out on the long run, ‘There are a couple of lumps, nothing too terrible’, someone may have said. Of course all these things are relative, of course we may have been lying.

Right on cue the rain started to fall just as we set off and it continued to rain in 1 way or another for the next few hours. Wet country roads are really delightful at this time of year as with no mudguards (except for the ever diligent Louise) everyone quickly ends up looking like they have ridden a particularly nasty cyclo cross. The upside of course is all of the extra roughage you swallow as you go down farmer’s lanes. Does wonders for the micro-biome.

15 of us chatted away in the rain on the long run this week; Richard, Elaine, Carol, Titch (glad to see you back!), Stu, Jeff, Louise, Laura, Pete, not Woody, Me, Jules, Mark, Paul and 2 others (sorry). Richard was pleased and comfortable with our pace on the flat roads through Davenham, Peover, Goostrey and towards Lower Withington, sitting comfortably in the group although I did have to tell him to close the gap a few times. Half way along Pexhill Road just outside of Macclesfield we split in to 2 groups, a hilly long ride and a hilly, hilly long ride although I later noted the hilly, hilly ride was only marginally hillier than the hilly ride. That’s hills for you. There were 10 of us on the hilly ride which left 5 hillbillies on the hilly, hilly ride.

Carol was our captain, our leader, the one we looked to for guidance and she did not disappoint, she even lessened the rain for a short while. 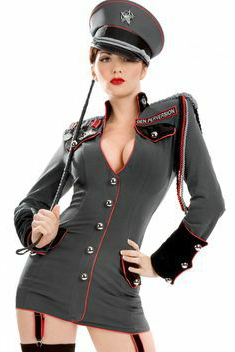 Carol in her new role

Safely tucked in the comfort of the group, shouting, ‘hole!’, so loud she was creating craters and deafening the chickens, Carol lead us fearlessly through the wilds of Gawsworth and on to Sutton. It was at this time Richard was told another porky, ‘just up this hill Richard’. Well it was just up that hill… Hollin Lane is only a few miles long but it drags up about 500 feet in that time. We all made our way at our own pace, Laura and Titch showing particularly well with Richard ploughing his own way up having found the definition of hell.

Re-grouping at the A54 junction we fibbed to Richard that it was just up this next hill. The sharp rise past the Four Ways is a real stinger in the legs after the Hollin Lane slog and Richard’s dripping sweat was testament to this. The swift descent past the Wild Boar Inn is quickly brought to a halt by the struggle up past the chapel at Allgreave, our group was all over the road now, some people already in the cafe, some not. I elected to stay with Richard and encourage him by regaling him with tales of mountains and crashes. I am certain I was very welcome company.

Blaze Farm was very quiet which was fine as we were served nice and quickly although not before our glorious leader informed us about her hot wet helmet. The things you learn. 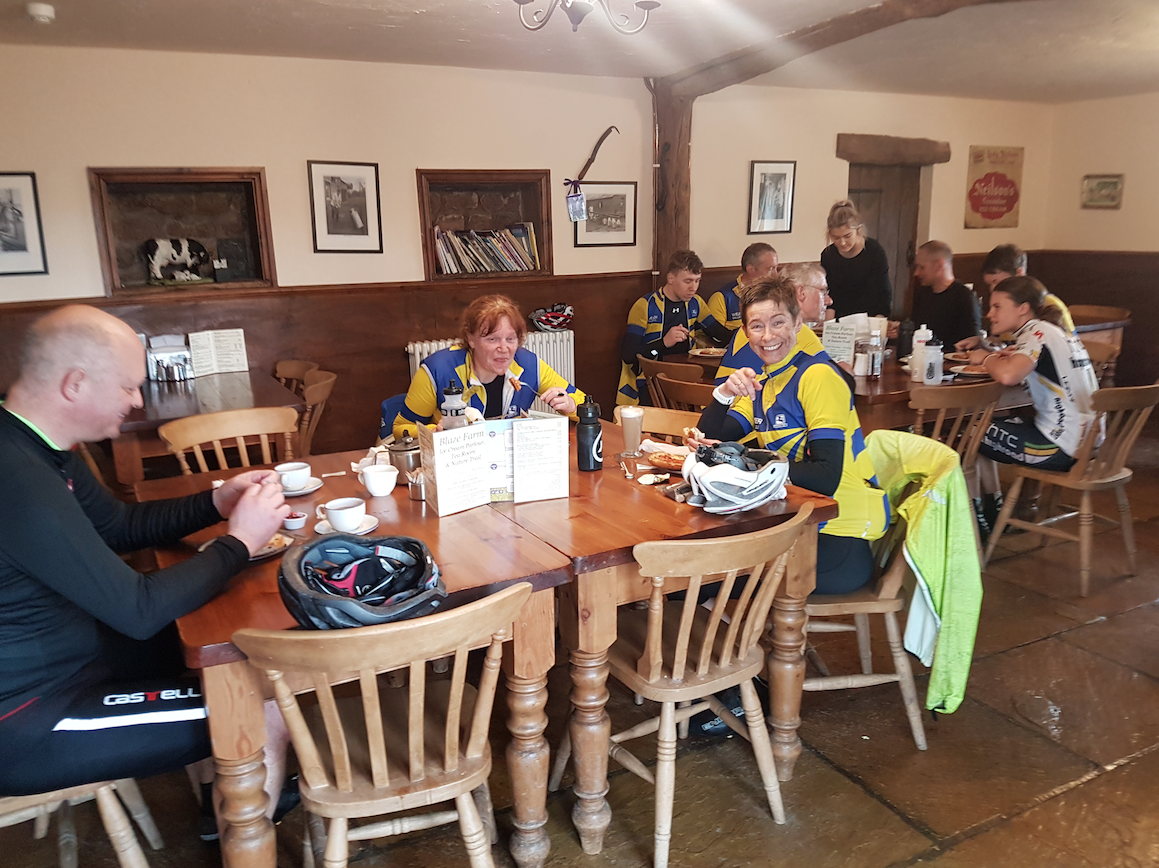 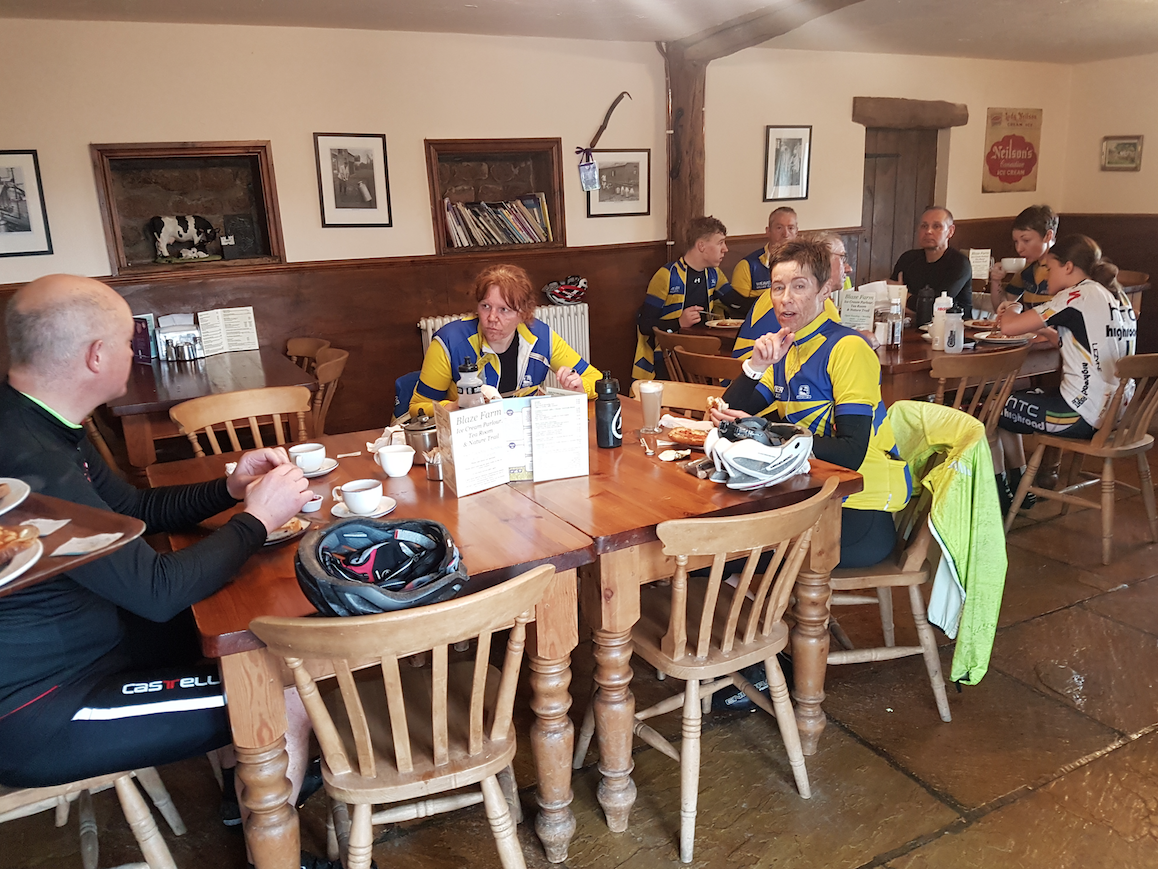 The 40 minutes or so it took to order and consume our beans and things went by far too quickly although we did have a long conversation about which way to take home. My suggestion was rejected by Carol in favour of hers. A minute or so later Carol suggested a suggestion which was remarkably similar to my suggestion. We went that way. Richard was slightly mis-informed that there would be just the 1 more hill. We were just gathering our things to leave when the hilly, hilly riders arrived. Pleasantries exchanged we set off, left out of the Farm, up the main road. Cafe legs are so often an issue, particularly when you start with a hill immediately out of the cafe and even more so when you are a new guy on your first hilly ride. Sorry Richard.

We re-grouped at the left turn down in to the Wildboarcough Valley before the swift descent to the calm of the valley floor. I was chatting to Laura about descending and she did an excellent job of staying off the brakes as we swooped down the narrow lane at 30+mph. It’s a lovely place along the valley road, a fine lane for cycling and after some breaking up the group got together again, much like ABBA have never done.

‘We go along here Richard and it’s just a short climb up to the main road and that is the climbing done for today’, I said with my fingers crossed behind my back. The valley floor leads to the Stanley Arms, left turn here and up Ankers lane, it is only a half a mile but with a couple of hundred feet of climbing it is another one of those where everyone goes at their own pace. Richard did a fantastic job, foaming at the mouth and hating me more by the second.

My descent off the Cat was hampered by the car I caught up with and got stuck behind just after Walker Barn, still I always enjoy going down there, the damp turns and rough surfaces really keep you on your toes.

The bottom of the Cat saw a short discussion on the route home. Carol said she was not sure of the route and rescinded responsibility. I opted for Prestbury. ‘We have the little lump out of Macc and that is more or less it’, I fabricated. I am not sure if Richard believed me by this stage but it was too late anyway, we lugged out of Macc and turned right near the hospital, down the hill and up the drag, all staying neatly together. A right turn gave us the descent to Prestbury before left and left again up Chelford Road which is one of those which in itself is not so bad but once you have had several hours in the saddle can be a real test. Not so for Richard it would seem as at the top he confessed to really getting in to it and wanting more. ‘We have broken him, he’s lost it’, I thought.

A quick chug down Birtles Lane and up the little rise near Henbury and that was all of the day’s climbing done. From there we stayed nicely together as a group past Redesmere, Lower Withington and the usual way home through Goostrey. Richard had obviously been keeping something back as the few miles towards Lach Dennis saw him on the front and upping the pace, trying to string things out. I turned off at Lach Dennis, and meandered my way home reflecting on an excellent day which even saw the sun come out for 15 minutes. As always thanks everyone for the company and the laughs. thanks to new guy Richard who did a great job, he knows how to suffer, I hope he becomes a regular rider, he’ll do well. 68 miles and about 3,700 feet climbed.