After missing out on a ride at the National 25 due to cancellation in July I was keen to round out the season on a high.  A quick look at the CTT events list unearthed the Leo 30 in Cambridge on the doorstep of some good friends who we’d not seen in a couple of years.  After suggesting to Lou that we pay them a visit, I dropped into conversation that there was a race nearby on the Saturday, she rolled her eyes and said ok – green light! My target was to set a new competition record, held by Alistair Stanway who rode a speedy 1:05:59 in 2015.

The course was E2/30C on dual carriageway, probably one of faster courses in the South.  I was an early starter, 26 out of a field of 140 so clearly a popular event.  As soon as I set off the wind was a problem.  Blowing at 90 degrees to the course it was coming from my right on the outward leg and I was constantly fighting the bike to stay in a straight line.  On more than one occasion I considered going onto the bars and backed off the power for the first couple of miles.  Confidence grew when I took it down into a harder gear and dropped cadence to around 80 rpm, this seemed to improve my ability to brace myself against the gusts.  I brought the power back up and tried to settle into a decent rhythm.  My minute man was a Drag2Zero rider on a trike, he looked to be having a torrid time in the wind and I overtook him after 10 miles.  Glancing down at the Garmin I was on 21 minutes – the record was on.  The Next 5 miles felt like a drag and the average speed must have dropped.  I managed a quick drink at the turn but no gel as it had fallen out of my leg gipper – must get back in the gym! The start of the return leg had some really fast sections, glancing down a couple of times to see 35mph+. I went through 25 miles in 52 mins flat and pushed on as best I could for the last 5 miles, crossing the line with severe cotton mouth in 1:02:40.

Really happy to take the club record forward for a little while. The overall winner was Matthew Smith of Drag2Zero who flew round in an astonishing 56:30! 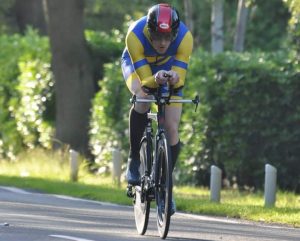