Saturday the 21st of September was the last Cheshire TT for a few of our club, namely Sam Taylor, Ali Stanway, Andy Milligan, Carol & Dan Robson, Dave Curran and myself. For me personally it was a welcome end to the season after racing since March and feeling pretty tired of late, so a final slog round the J2/9 to try to up my standings in the Manchester and District Ladies BAR was a good finisher to a long but solid season for me.

Saturday was windy! Lovely and sunny, but windy. The direction meant we’d be pedalling treacle on the Twemlow Lane section of the course, but as this is the end you only hit once it was advantageous as it meant we had much more tailwind overall.

I was number 64, which was the same number as the week before and seemed to be a theme, as Stephen Turner of Westmead Team 88 was 1 minute behind me again too. Setting off on the downhill from Bomish Lane I could feel the crosswind from my right straight away, so made a mental note to stay slightly further out than usual on the cross sections so I wouldn’t be caught out. I swung quickly out onto the A535 after the marshal signalled it was clear, and with a quick glance right could see a rider on his second lap coming from the right. As my first little race target I decided I wanted to hold him off. With a cross tailwind I settled into my effort and reached Chelford Roundabout without issue and without being caught, though due to traffic had to stop and put my foot down to wait for 2 cars and a lorry to come past. Off again I cleared the roundabout and was immediately overtaken by my chaser (number 25) who must have had a clear run at it. I could tell though I was going better than him, especially with the few more competitive watts I found wanting to get back past and overtook him back.

The next section of the course had a fantastic tailwind, and up to Seven Sisters Lane I flew, taking the corner on an average of 25.4mph, and holding this pretty well up the lane, though almost ending it all pretty early when I nearly went straight down a grid hidden by a pot hole! About 20m before the left turn out of Seven Sisters, rider 25 overtook me again, which annoyed me a bit as it meant I had to slot behind to take the corner when really you could wait at that point unless you were on a flyer. The marshal waved to us it was clear and unfortunately, he didn’t take the corner well at all, coming into the apex, then out really wide and suddenly slowing for no reason, which completely cut me up and meant I had to brake as well and lost a load of speed into the uphill. I decided not to risk him again and stood up, stomping on the pedals hard to get away, and to be fair he apologised as I went past.

As expected then, the course slowed into the headwind, though there’s always a lovely bit coming past Whipping Stocks (with Heather and Fred Bamforth shouting encouragement as well) where you can pick up a bit. Onto Twemlow and it was hard work, I took a gel, more for the mental boost of knowing I’d topped up, and dug a bit deeper to get it done. Out of Twemlow I felt pretty knackered and was averaging 24.1mph at this point, but just kept reminding myself I had all the nice fast bits to come again.

Over Chelford cleanly second time, and my minute man 65 Stephen caught me, shouting some encouragement as he went past, though having not caught me last week I immediately thought “ah ****, I’m not having a good one here!” Straight away we were both caught by 66, Tim Marshall of Seamons CC, and here a load of cat and mousing started as we weren’t going at hugely different speeds but were all trying to stay out of eachother’s way and slipstream. I caught Stephen again, but as I got level the road went up a bit and he pulled away again, he then caught 66, who was 20m up the road, but then 66 sped up. We took the left to Seven Sisters with the two of them about 25m and 20m up the road from me, and watching 66 speed up whenever 65 was creeping up on him became quite entertaining. Trying my best with screaming legs to not let them get a good gap was really keeping me going as well.

After another clean left onto the A50, 65 sprinted the up hill and overtook 66, but then as the road levelled out he was caught again and seemed to slow. Past Whipping Stocks with Heather yelling “CATCH THEM!!!” in the style of Dastardly, I did my best and pulled past Stephen (65) again, before he then drew level and we both went like idiots past Mangoletsi, finishing at the same time level with one another.

So that was it then, season done! A very slow roll back to the HQ to fetch times and I wasn’t disappointed…

(Note: official results still not published yet, so there may be prizes and placings for vets etc. but I don’t know)

(My only rue was that with a cleaner ride I could have done my first Cheshire sub 01:01, but it’s an open road race and you can’t control everything.)

Carol finished with an 01:08:11, which is a massive course PB, and having discussed our averages and where we gained and lost them this was a really strong ride! Carol lost less average into the headwind than I did, and also gained more back on lap 2 with the tailwind. I’ll wait for some self-deprecating comments on Facebook Carol, but you should be chuffed with this and unashamed to have a right good boast! Such a solid year of improvement after improvement it’s been great to have us and Lynsey at so many races in club colours. 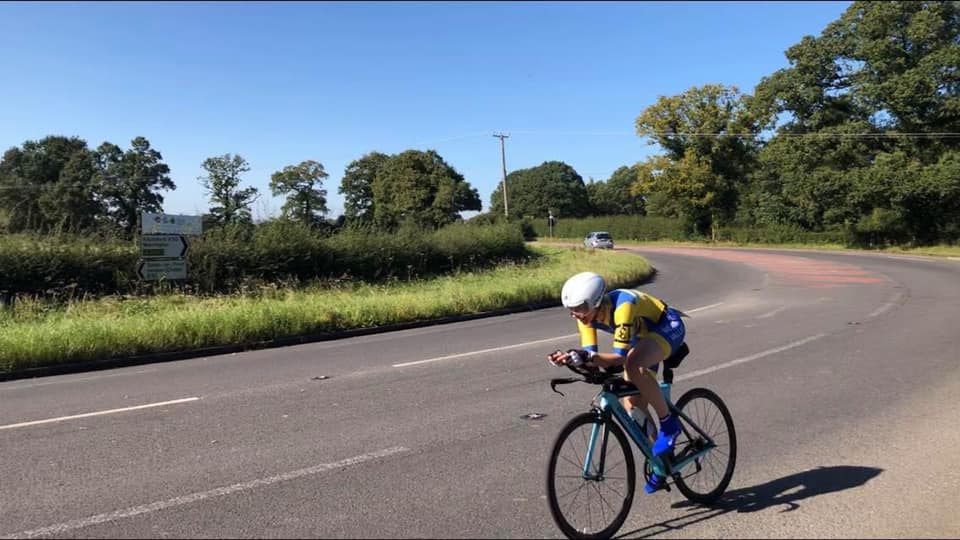 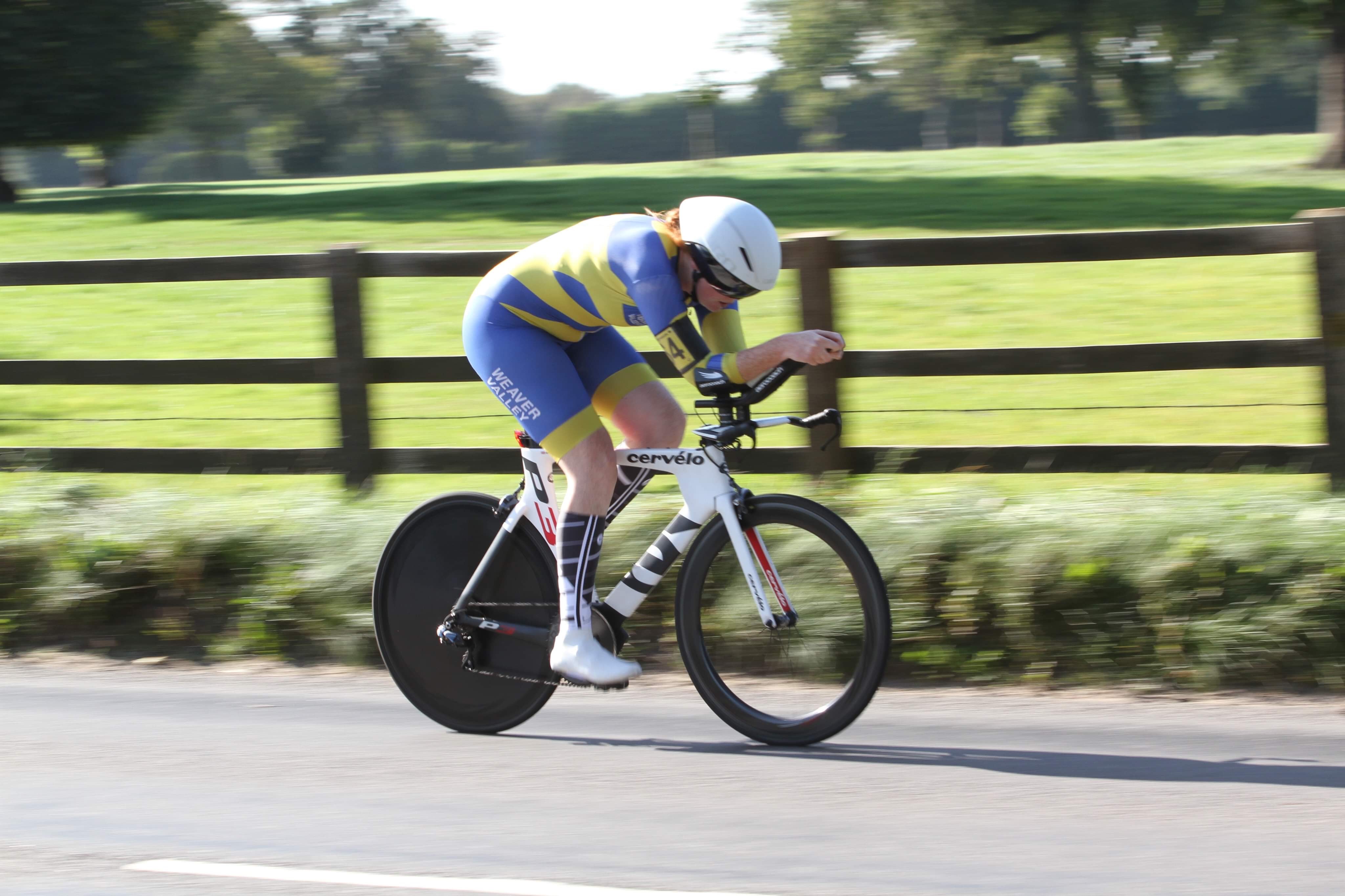 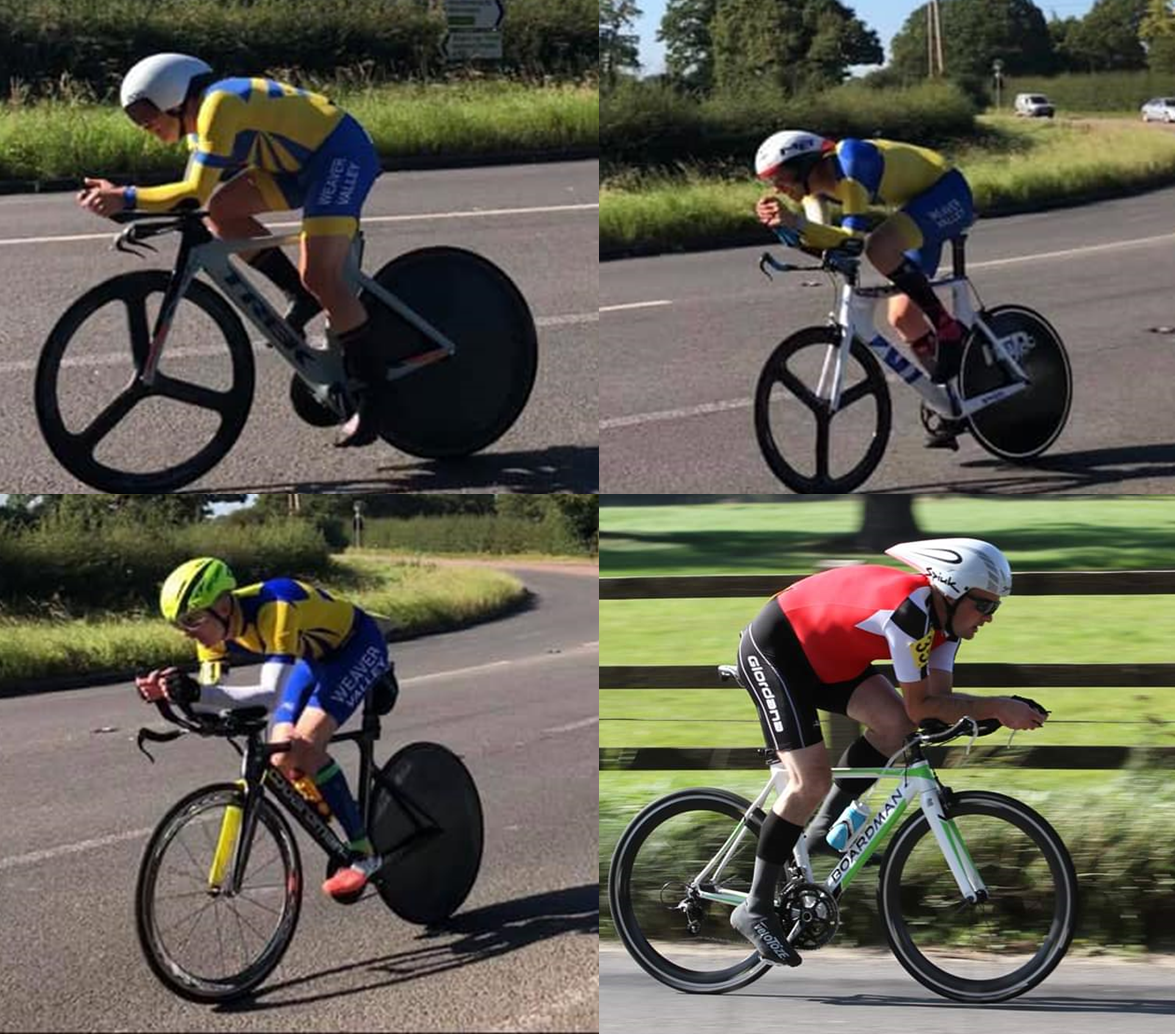 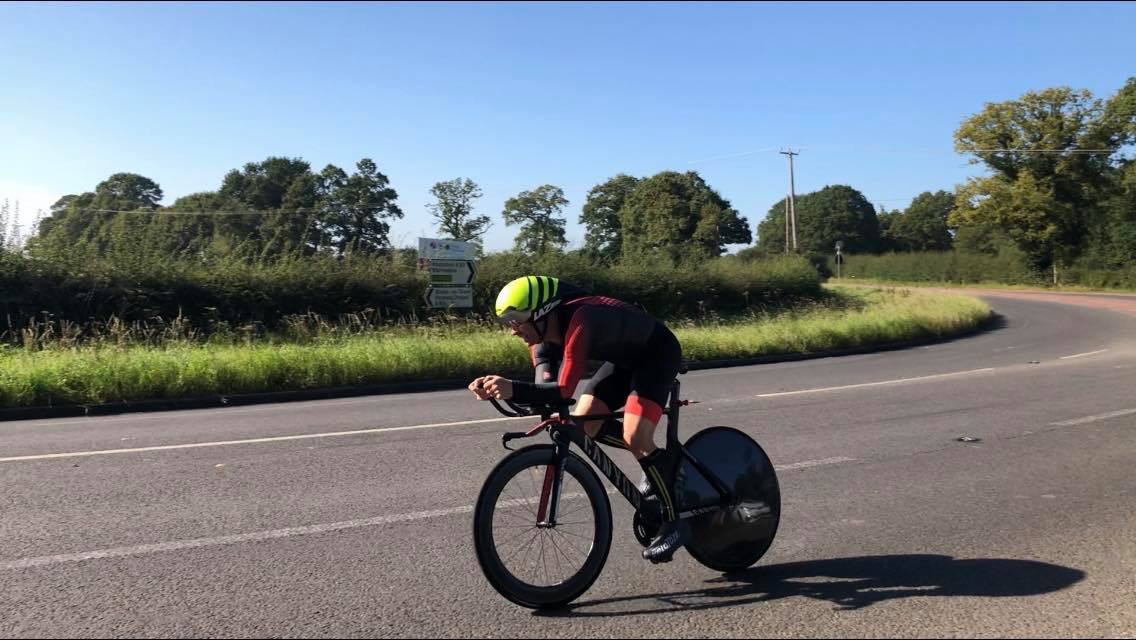 A fantastic event and a great end to the TT season for a club I’m so proud to represent. 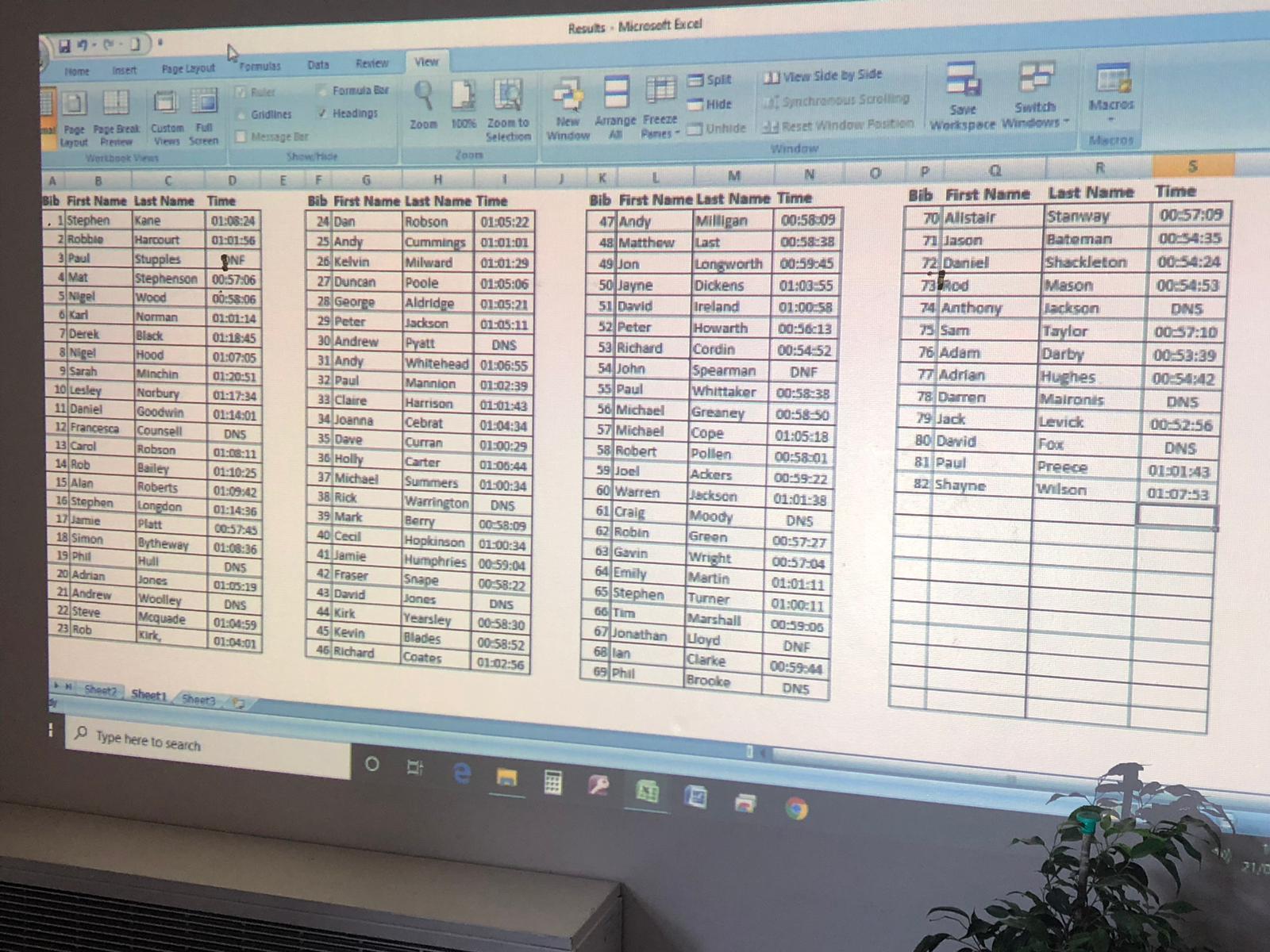 The personal highlights for me from this season have definitely been the 4-up with the guys, my first 100TT and winning my first full-field race at Darley Moor back in April; the day after getting back from having an amazing time in Majorca. I’m still hoping to do well in the Manchester and District Ladies prizes, but they are yet to be confirmed.

My main target for this year was to win the best all round (BAR) which takes your best average speeds from Cheshire 10, 25 and 50 mile events, and works out who has the fastest mean average over the three distances. I was second last year to Sarah Grant who unfortunately had an off and hasn’t ridden much, but this year Claire Harrison has been absolutely amazing and has kept me on my toes for months. At the moment I’m not confident I’ve got it so will have to wait, if I haven’t it’s ridiculously close with about 0.02mph difference between us. Fingers crossed, but if I don’t get it I will sure as hell be motivated for next year.

I’m also reckoning Carol and Lynsey will have placed well in the BAR as both have covered all three distances this year with fantastic times.

To show you the difference too, here’s last year’s results. We have both gone so much faster this time round…

So there we have it. I’m just going to paste last week’s results below as I said I’d do a blog then didn’t, sorry Ady!

The Racing Chance Foundation 25TT around the J2/9 today. Only Sam and I raced it. Stu and Ali DNSA and no Andy Woolley. Beautiful sunny day but really windy.

Sam, tired after his fantastic 100TT last weekend sat up realising he was on a bad day, but still managed a 58:36!

Alex Royle from Manchester Bicycle Club won with an unbelievable 51:44.

I wasn’t quite at my best today and got held up a few times, I was hoping for a low 01:01 but not to be. That said I don’t want to take away from Keri and Sarah on a tough day out. Especially Sarah who was on her first TT in months after an off earlier this year.

I still haven’t been off the podium in Cheshire TTs this year and with only one TT left for the season next weekend I’ll try to keep it that way.