On my arrival at the club this morning it was evident a discussion had been taking place as to the whereabouts of Dagfields. What was a Dagfield? Had it moved? Was it friendly? Was the plan to capture one? We may never know. Conversation briefly turned to my yellow tights Alan being particularly envious (to answer the question raised at the time, as sported by Malvolio in 12th Night. I was actually Lord Orsino when I was in the play and I was fabulous, but I digress).

Anyway a decision was made that there would not be a short or a long today, just a jaunt in search of Dagfields. So it was that a group of about 14 plodded through Hartford and Whitegate where we waited for 5 that had been delayed. Craig was our defacto leader as he claimed to have seen a Dagfield at some point and knew what one looked like. Out through Oulton and towards Bunbury we trundled, the group always chatty, never cohesive. At a random junction Craig decided he couldn’t go on looking for the Dagfield, perhaps wondering if it was going to be fierce and so he left us. We were now leaderless although hopeful in the mild and still conditions and carried on, looking for a road that one of us might recognise.

Carol punctured near Reese Heath. Strange that the last 2 punctures I have witnessed, no one had helped the sufferer. With Carol however several people, myself included, not only helped but in fact did the whole job for her. Is this because the weather was kinder today than it has been so no frozen fingers or because Carol is of the Lady variety? Discuss. Anyway, puncture fixed, Carol stayed with us for a few minutes and then departed to go and view footballists.

We eventually found Nantwich and started seeing signs that said ‘Dagfields this way’, none of us however were brave enough to go and actually see a Dagfield, Alan thought about it for a minute but turned around, and so we went towards Audlem instead. With the long run what normally happens after a couple of hours is we stop and have a natural break. There is none of this with the short / combined run, the train never stops. I however did stop for a comfort break and had a nice ‘wake me up’ chase to get back on. 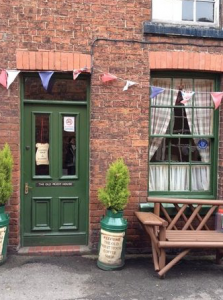 On arrival at the café Elaine said she was carrying on to find her own way home, so we said goodbye to her. I haven’t stopped at Audlem for a while and for those that haven’t been it is very highly recommended, a proper cyclists café; exceedingly welcoming, cosy, big, cheap portions and with a sweet shop attached. What more could you want? 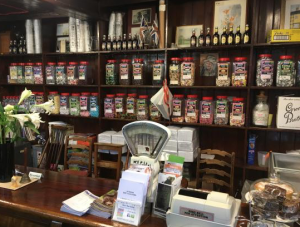 Comestibles consumed, we set off again, a more together and compact group now, travelling at a slightly faster pace than before lunch towards Nantwich and then Winsford without mis-hap. Things broke up a little on the short rise going out of Winsford towards Whitegate and carried on fracturing for the final few miles home. I stayed at the back, where I had been all day working as a self-appointed sheepdog.

So to Hartford and final goodbyes before the ride home alone. A nice relaxing, stressless day, a bit over 60 miles and not a Dagfield in sight.