In a change to the advertised programme..

..we went to the Mills. Given the interesting weather, including an even more interesting wind, I didn’t want  to ride back from the cafe into a head wind, so decided on a different – call it unimaginative if you will – trip to the Mills, knowing full well that we’d be into the wind, with the tantalising idea of at least getting some tail wind coming home.

As its getting well into winter, I also though it a good call to at least get some hills in on the way, so we headed out up the hill to Kingsley, up Middle Lane into Meeting House Lane. At the end of the lane Ewart punctured, so we wrestled with his tight fitting Continental tyre to get it off the rim, and eventually, we were off. We continued down Newton Hollow and into Bushells Lane and then up and down New Pale Road into Mouldsworth, where we continued our usual course to Mickle Trafford and hopped onto the Greenway. We managed to cycle through the dark skies towards brightness, skillfully avoiding all but a few drops of rain.

Along Parkgate Road, I urged Steve Malkin to hold off his usual 5 mile long leadout for a sprint, and he did so. We waited for Paddy to make the jump, which he did, urged on by his dad. Steve took chase and… well, Steve says that Paddy stopped pedalling and he pipped him to the line (wherever the unofficial line is on the day of course), but this may have to go to the judges and commissaire…

The Mills was fairly quiet today, and we were soon served with the usual great food, hot brews and cake, and relaxed in the comfort of the Eureka.

I called ‘2 minutes’ as Alan Silver had taught me with great skill and mastery, and we started to get ready.

All ready, and a member of Birkenhead North End, who was obviously an off duty cat-walk director, advised Matt that he had got dressed, yet had failed to shoulder the braces of his bib-shorts. Matt quickly started to take off all the gear that he had put back on and furiously fixed his fatal fashion faux-pas. We all sympathetically looked on, as he rearranged his clothes to regain the haute couture look.

We made off through Capenhurst and the gated cycleway, round the back of the zoo, and then back via Fox Covert lane to Mickle Trafford, and on back towards the forest. Many delighted noises emanated from the peloton about the tail wind, so a good call I think!

At Ashton Road, I peeled off, but Steve Malkin picks up the story of the Delamere Sprint:

As if it wasn’t bad enough being beaten by young Paddy in the Delamere sprint, I am now forced to compound my humiliation by giving a written account…

Geoff Maddock took the front on the step kick up at the start and gave us a magnificent lead out all the way through the forest, we duly lined up astern ready to pounce…

Over the crest of the final rise I put the hammer down and thought I had it in the bag until a determined Paddy powered up behind me and pipped me on the line by a tyres width. 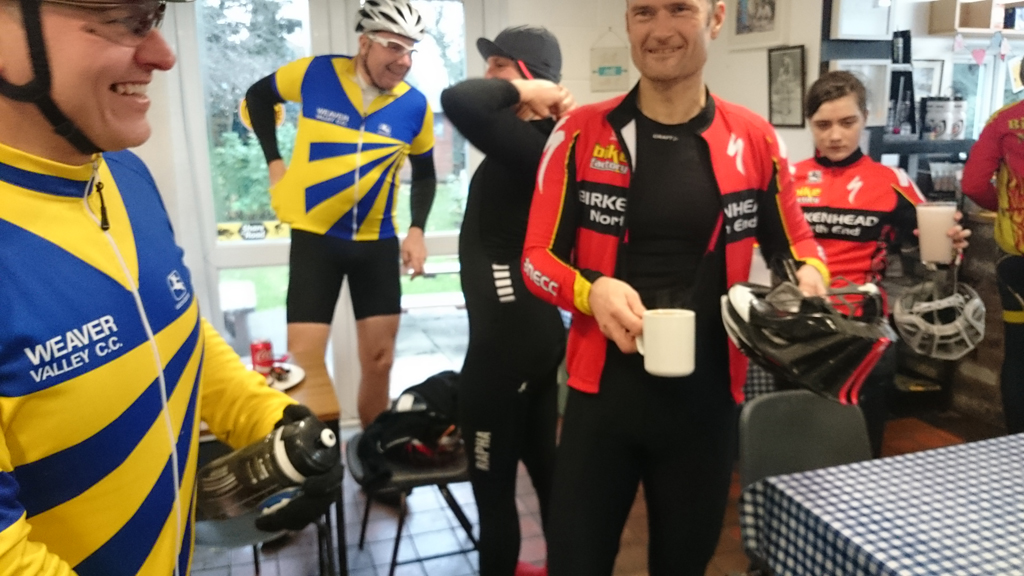 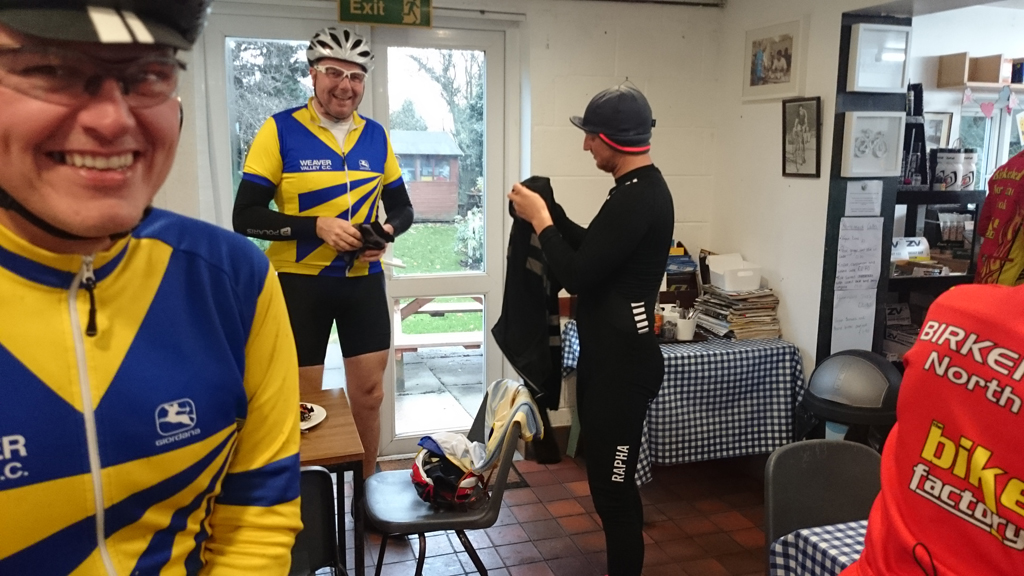 Judging by there faces, it’s probably the funniest thing the two Steves have ever seen.
Matt was less impressed.. understandably, as he regains his composure.

A good day out on the bike I think. After a few weeks off, my legs don’t think so.

Road Runs
To Egypt and Back
Strava…