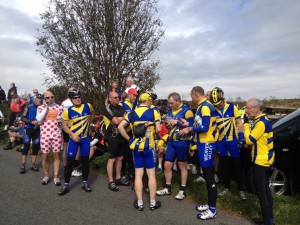 The organisers had once again added the Stoke on Trent stage to the Tour of Britain calendar and it would have been rude to have not ventured along. Last year only 5 of the Weaver Valley ventured to top of Gun Hill but with Wiggins & Cav fever still in the air a big group of 30 headed off from Duke of Portland this morning at 10.30.

There were too many names to mention but it was good to see Kempy out for the ride, Chris Buckley also rolled up again in his Polka Dot outfit much to the amusement of everyone, and we were joined by Dane Walker & Alan Sheldon, close friends of the club and who come along to Llanberis.

It was a beautiful morning, slightly chilly but the sun started to peak out between the clouds as we reached Goostrey. Through Goostrey we carried on to Swettenham, down to Arclid Green then up the climb from Congleton to Bridestones. We spun along nicely, and luckily the roads were quiet for such a large group. I had tossed and turned about the route all week and if we would have enough time. We reached the top of the Congleton climb in good time, for many the worst climb of the day. The decision was made to head direct to Gun Hill to get a good spot and get there in time.

The road from Bridlestones to the Leek road rushed by. It was quite a sad moment for me because I have a fond memory of watching Dave Astles climbing up this road, battling it out on his own with the Seamons on the way home from watching at Gun Hill last year. A splinter group headed right along to Leek to complete the whole climb, while a second group went up the opposite, and shorter end of the climb, to the top.

It was really busy with cars parked right along the road and hundreds of people making their way up the climb. We were lucky that Martin was already there reserving us a spot near the top. Just along from us Dave Hinde had come along (all be it driving!!). We didn’t have long to wait before the convoy of motorbikes started rolling through.

The atmosphere built and built, every little movement saw people looking up the road, people shuffled into position and then the helicopter was right ahead before swooping across right in front of us in the gap of the valley. It was epic. Then the riders came. The crowd roared, the riders passing just inches away. Quite a large breakaway group came past first, followed by a large chasing group, then strangely there were some large gaps to a small group which contained Wiggins and Cav and then a final larger group. Perhaps there was an incident further down the hill, it was strange they were so split up.

Afterwards we made our way back down the hill, through Macclesfield to Henbury cafe. Lunch was fantastic and they were great with such a large group of us. Everyone traded stories, spoke about Armstrong and we all listened to Kempy’s stories from back in the day.

After Henbury we headed direct back through Siddington and Lower Withington. The pace was pretty hot all the way back home with bellies full of Baked Beans on Toast!

It was a great day, the weather perfect. I’d like to thank everyone who came along, I think we stuck together pretty well and it was a really good laugh. Much appreciated. Hopefully Ady will post up some of his pics, and please feel free to change my rubbish effort above! 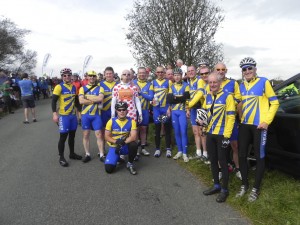