During last Sunday’s epic, only for the brave and strong ride, I became aware that my wheels were in need of attention. The relentless freezing rain had got in to the hubs and washed away the lubrication, replacing it with a screaming mouse sound effect so I was aware that work was needed in the form of new grease. You might have seen somewhere that I have had a bit of a cold and as a result of this I never had the gumption to get in the garage, strip the wheels and do the necessary work. Saturday morning 8.30 am, I went into the garage to find the front wheel rusted completely solid and rear wheel moving only with a great deal of help. Plan B required. It was lucky that several weeks ago I had given my summer bike the once over so it was just a matter of air in the tyres and away I went. What a difference a nice bike makes… made me feel like I had a half an ounce of ability. A complete fallacy I know.

So. Saturday before the weekend away on our bikes that several of us have planned. I joined Jim, Colin Walsh, Tim, Jules, Nick, Stuart and Geoff at the Rugby club. I had to endure many comments about my choice of bike before a general consensus that actually it would be really nice to get the summer bike out, it being a decent day and all.

We met Matt Ellis, Paul Handley and Colin Carthy at Davenham and rolled along without mishap towards Lower Peover, Goostrey and then Congleton. I was feeling pretty rough at Congleton and had strong thoughts of turning around but thought i’d give it just a bit longer. It turned out that Matt was the first to leave us, having an appointment in France with a plank, a mountain and some frozen rain.

Out of Congleton, up the lower slopes of The Cloud and it was Jim who put in the first dig of the day, getting a small gap up the steep slope before waiting to re-group at the Coach and Horses. We said goodbye to Paul at this point and our group of 9 carried along the undulating road which eventually joins the Macclesfield to Leek thoroughfare. There are a few up and down ramps along here which variously warm the legs and sharpen the senses quite nicely. At the main road it’s a left turn and 5 minutes to the Bosley crossroads. Right at the lights and it was noticeable the number of people taking on food and drink before tackling the Doonbaars. Jim, Geoff and Tim skipped up the road with the rest of us fighting the slopes in various states of distress. A general re-grouping took place at the Sutton crossroads before it was agreed we would next all be together at the cafe itself.

Turning right at the sharp turn by Algreave and Jim, Tim and me were together, Jim and I taking turns on the front. It’s a long slog of a climb, not too steep but fairly relentless. I was coping OK until Tim put in an effort, breaking up the rhythm, we got together and then he did the same thing again. Again we got together but at this point I needed a little breather and that 15 seconds was all it took for the gap to be opened and for the pair of them to slip away.

Being at the top of a hill, riders arriving at the cafe in ones and twos has the dubious benefit of no one having to queue. It’s a great little cafe, there are loads of ways to get to it and really should be on the list of destinations more often. During lunch I exposed the fact that i am not up to date with modern technology, mistaking Jim’s phone for his Garmin. Beyond that I also asked Geoff if he had been uphill. What can I say, I was tired. 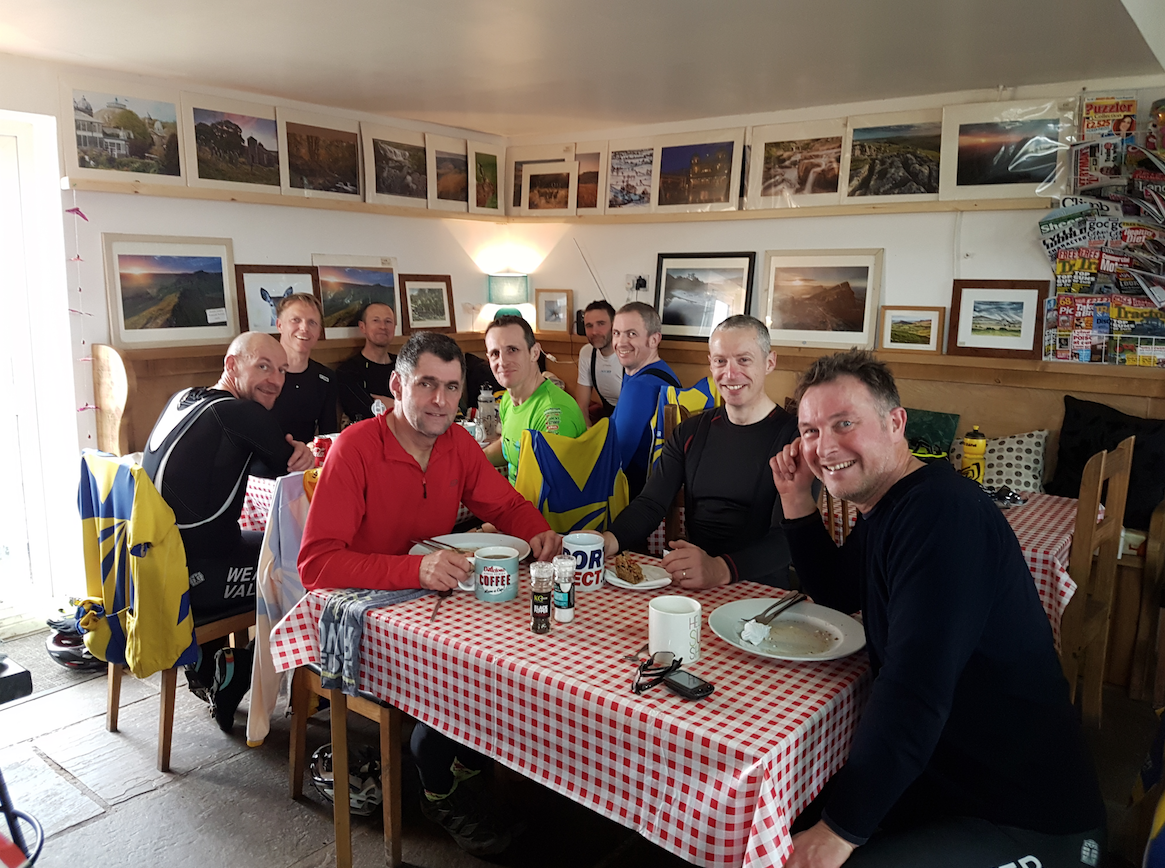 Out of the cafe and it was decidedly chilly for the first 10 minutes on the Leek to Buxton road and then up the single track road over the hump at the top of the Cat and Fiddle.

Regrouping by the main road we then broke up pretty quickly again going down it in to Macclesfield. Jim, Jules and Me worked together, although I thought Jim was Colin and wondered why Jim was off the back. Half way down the hill and Colin (Jim) got a gap and Jules and Me could not get him back, me all the time marvelling at how strong Colin was. Quickly we were in to the centre of Macclesfield where I finally realised Colin was Jim and that Colin actually arrived a little bit afterwards. I hope that is all clear. A general regrouping took place here and I had a lie down.

Macclesfield, ‘the town of a thousand traffic lights’, was quickly cleared before the left turn at Broken Cross. Phil Booth’s nemesis was taken without crisis and we rode at a comfortable pace back the usual way home through Lower Withington and Goostrey. Jim turned off with me at Lach Dennis to get his 100 in. I had to return home double quick as we were having people over for dinner and there was a stove I needed to be chained to.

A really excellent day out, good company, nice weather and a challenging route for all. I was so pleased I did not turn around at Congleton as the legs and lungs eventually loosened up. See you next Saturday.