On Sunday 25th September 2016 I undertook one of my main challenges for the year, the 3 Peaks Cyclocross in Yorkshire.

This is a unique and popular annual event and it is now in its 54th edition, it’s well known in the cyclocross circles and is oversubscribed with entries limited to 650 places and usually double that amount of applicants.

The event starts and ends in Helwith bridge and takes in the mountains of Whernside, Ingleborough and Pen-y-ghent; these are collectively known as the Three Peaks.

You’re limited to riding a cyclocross bike by the rules of the event but it’s unlike any cyclocross race I’ve ridden. It’s really like three disciplines in one, road riding between the mountains, fell running (or trudging) up the mountains and descending some very sketchy downhills. 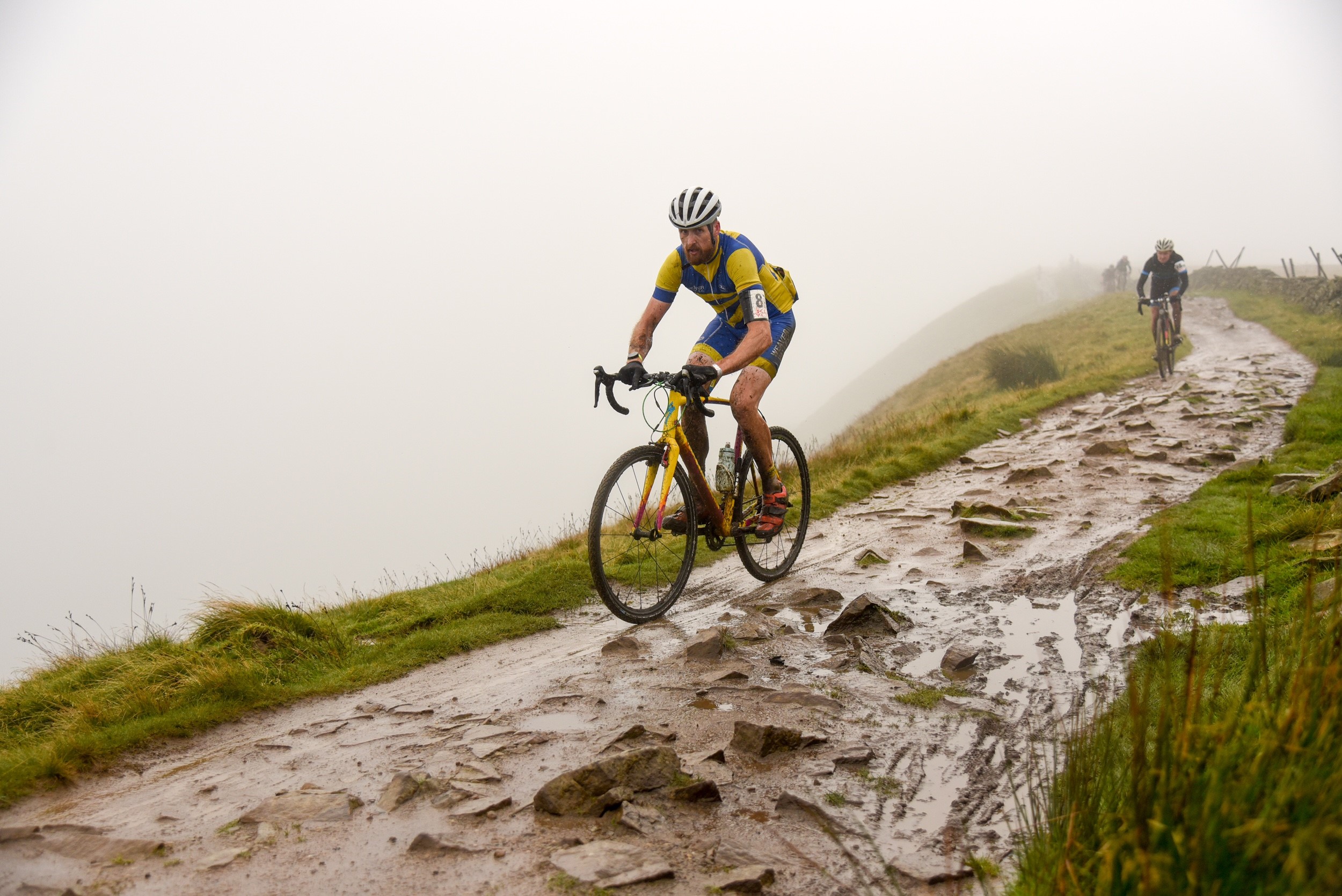 The day of the event was a real mixed bag of weather starting with rain in the morning, drying off for the start, hill fog and high winds on the first two peaks and sun for the last peak. 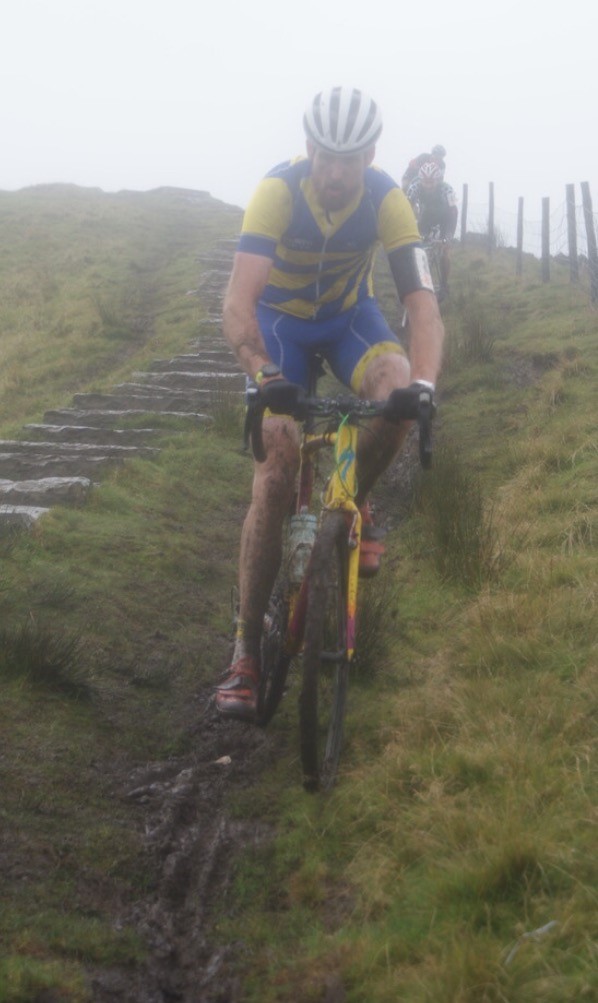 I’d set my stall out for a sub 4 our time that had me gridded for the front of the race but being a tad later than planned, ahem, I started from about 500th place.

I sifted my way through riders on the road to the first peak Ingleborough making my up to 150th place or there about.

This first climb was tough, very boggy and steep. It really came down to getting into the climbing zone, bike on the shoulder, and tracking the heels of the rider in front, still I felt strong and made up a few places on my way to the peak.

The descent became a matter of avoiding mechanical issues as much as riding fast and I intentionally notched my pace back to stay in control and choose good lines. I saw a number of riders struggling with punctures and mechanicals as I descended. The descends were tough on the upper body, they’re long, longer than most mountain bike ride descents, and you get some real arm pump where you struggle to hold on and stay in control of the brakes.

I’d installed cross top, or interrupter levers, a second set of brake levers on top of my bars, these were a real boost for the descents.

I was glad to see Nick Butterworth from Weaver Valley cheering me on at the foot of the Ingleborough descent amongst the great crowds. This lifted me and getting a bit over exuberant, or showing off a little, ended up having a slide out crash on the last grass bank of the descent.  A quick check of the body and bike showed all was ok and I vaulted back on the bike to a cheer to hit the road to Whernside.

I found myself in a descent bunch on the road of about 10 with 3 or 4 of us prepared to work on the front, better than being solo.

I hit the foot of Whernside in good condition, I marshalled here in the 2015 event so had good knowledge of the hill. A solid climb, very different in nature to Inglebrook as it was mostly rocky steps, and fast descent put me in good position when I came into the crowds at Ribblehead in about 120th position.

I stopped to grab a new bottle from my Girlfriend who was thankfully supporting me and raced on the road to the last peak Pen-y-Ghent.

This road section was tough with a head wind and I found myself riding solo, I finally made contact with the group ahead just before Pen-y-Ghent’s climb. This climb was ridable for a long way before being forced to dismount and shoulder my bike.

I felt OK riding but when forced to switch to shouldering my thighs started to feel like they were exploding with every step. With 200 meters to go to the summit I felt light headed and feared the doom of an impending bonk but I managed to focus on putting one leg in front of the other and made the summit, I think I lost 15 placed in those 200m!

I took to the decent mindful of my energy levels and with caution on the steeps picking up more steep as the slopes became gentler.

Hitting the road again I raced to the finish line fighting through cramp. I knew I was close to my sub 4 target and managed to cross the line in 3:58:24! 135th of the 650 riders.

A great day with great history and atmosphere. I’ll be back next year if I can. 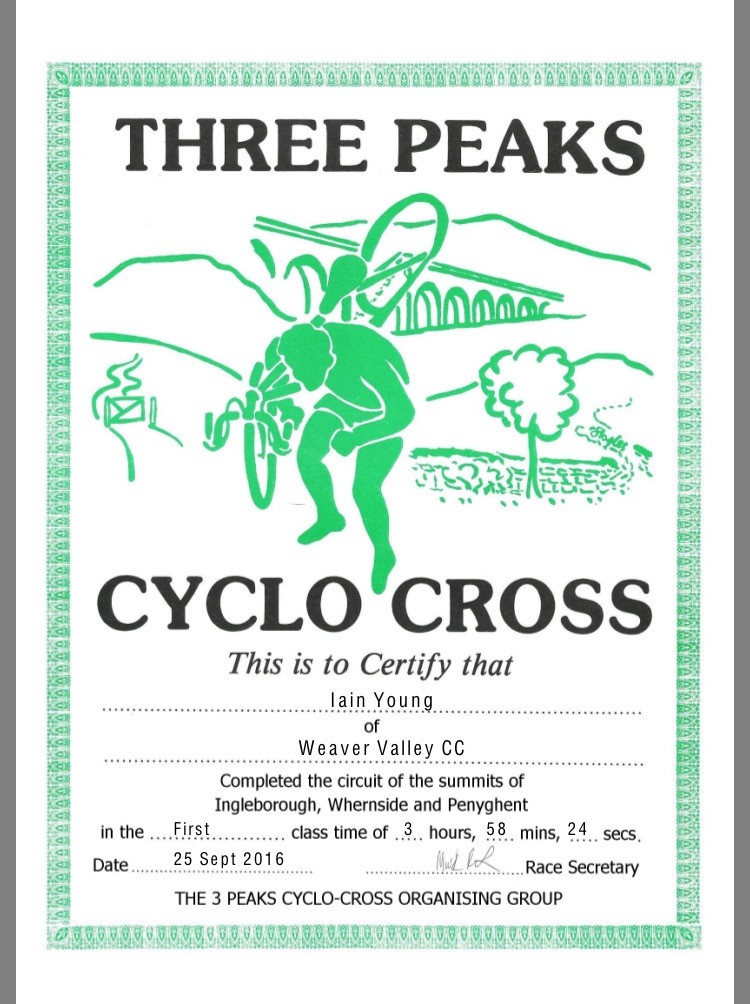