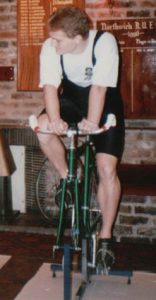 Thanks to the riders who turned up for our final club 10 of the season.  There were some notable rides on the night.  Andy Milligan and Paul Longley have been producing some great rides this year and finally they got a win with a tie for first place with 23:13.  Titch now has to take it easy for a few days before riding his first ever 12 hour TT on Sunday.  Good luck Titch I’m sure you will enjoy the day.

Nick Butterworth rode his first and last club 10 of the year on his mountain bike, complete with rack and saddlebag.  His 30:01 narrowly missed 20MPH average so a great ride.

I can now reveal the final result of the season long Guardian Cup handicap and scratch trophy competitions for club members.  It’s quite rare for a rider with many years experience to take the Guardian Cup but Steve Thomas enjoyed his comeback year after several years of house renovations and took the trophy with 121 points.  Despite many digs from me he never actually rode his TT bike so all of his rides were completed on his road bike and he clearly gained in fitness as time progressed.  Nice one Steve.  2nd place went to Rhys Edwards in his first season of racing.  Great series Rhys and hope to see you in some open TT’s next year.  Carol Robson has made massive gains this year after several years trying.  Recently she seems to have PB’d every ride and at distances up to 50 miles as well.  It just shows that there is no substitute for regular competition.

Dave Walker looked set for taking the scratch cup but unfortunately the demands of a young family have restricted his rides so he gained maximum points in 4 events but didn’t manage to get a 5th counter in and this knocked him down to 6th place overall.  As they say, you have to be in it to win it so hope we see you more next year Dave.  As a result our victor was Sam Taylor which is fitting after an amazing debut season with the club.  Sam scored 122 points with two wins and three second places.  Andy Milligan took a well deserved second with 114 points, just pipping Dave Curran by a single point.

For those who are keen to continue with racing the open season continues right up until early October so if interested go to the CTT website and enter some events.  It’s common to get some quick days in September so PB’s are still possible.  If not hope to see you at the 10’s next season and finally a big thanks to Ann, Graham, Jimmy and anybody else who have regularly helped out with the running of these events.