One of the joys of parenthood is the continual stream of children’s birthday parties there are to attend. The pleasures of standing around for 2 hours in some godforsaken hole with a load of other delighted clockwatching parents cannot be overstated. Today I was lucky enough to have a party at 12.00. So it was that this morning I set off at 8.00 am in order to get some miles in before my lunchtime excitement, the intention being to then meet up with the club for a short ride before coming home.

The headwind was powerful and the rain, when it came, really meant it. Anyway after a couple of hours I arrived at the club which was bereft of riders save for Colin Walsh, Ewart getting his bike off his car and Jeff. Kev and Eleanor arrived with Craig and then another rider and finally Paul G.

Kev had previously said that he was intending to go to Loggerheads for a pre-Llanberis jaunt. In view of the expected heavy rain and the sparse number of riders present though, a new plan was suggested; to go around the hills of Delamere forest, the Yeld, Summertrees, etc. A good, hilly, compact ride would be had in not many miles and importantly this would mean everyone would be back home before the afternoon’s expected freezing downpours arrived. A poll was taken, ballots were cast, hands were raised, every t was crossed and every i dotted before it was agreed that the group would do a ‘forest loop’. Colin and Paul discussed briefly going to Blaze Farm by themselves before relenting to group pressure and agreeing to go around the forest.

Once it was all decided, Kev said, ‘Shall we go to Loggerheads?’. Everyone agreed straight away. So it was that our small but perfectly formed group set off into the blasted gale.

As I say, I had to get home so I peeled off at Acton Bridge and thence the joys of soft play or some such, leaving the others to their fate. The Forest, Loggerheads, Blaze, who knows?

Eleanor picks up the story:

“Well five of us made it to Loggerheads in weather varying from wet to very very wet. Paul G and Kev did a great job setting a sensible pace on the front (by which I mean a pace I could just about manage) and they, Jeff and Colin were brilliant about ensuring we all stayed together even though they are used to going much faster. The weather got to all of us as well as into my bones and by the time we got to Loggerheads at 1.30 we were all saturated and hungry, but one benefit of the weather was that they had room for us! Jeff didn’t have glasses so had really sore eyes. Anyway we whizzed home with a welcome tailwind and Kev and I arrived home at 4pm in the gloom. The conversation on the ride followed the 80:20 principle, I.e. 80% of it was in the first 20% of the ride, we got very quiet (even me!) as we got wetter. Did I enjoy it? In a strange masochistic way I did, although I am bushed now. And I feel very bonded with and indebted to my riding buddies for their kindness and support. Some good miles done for Llanberis!” 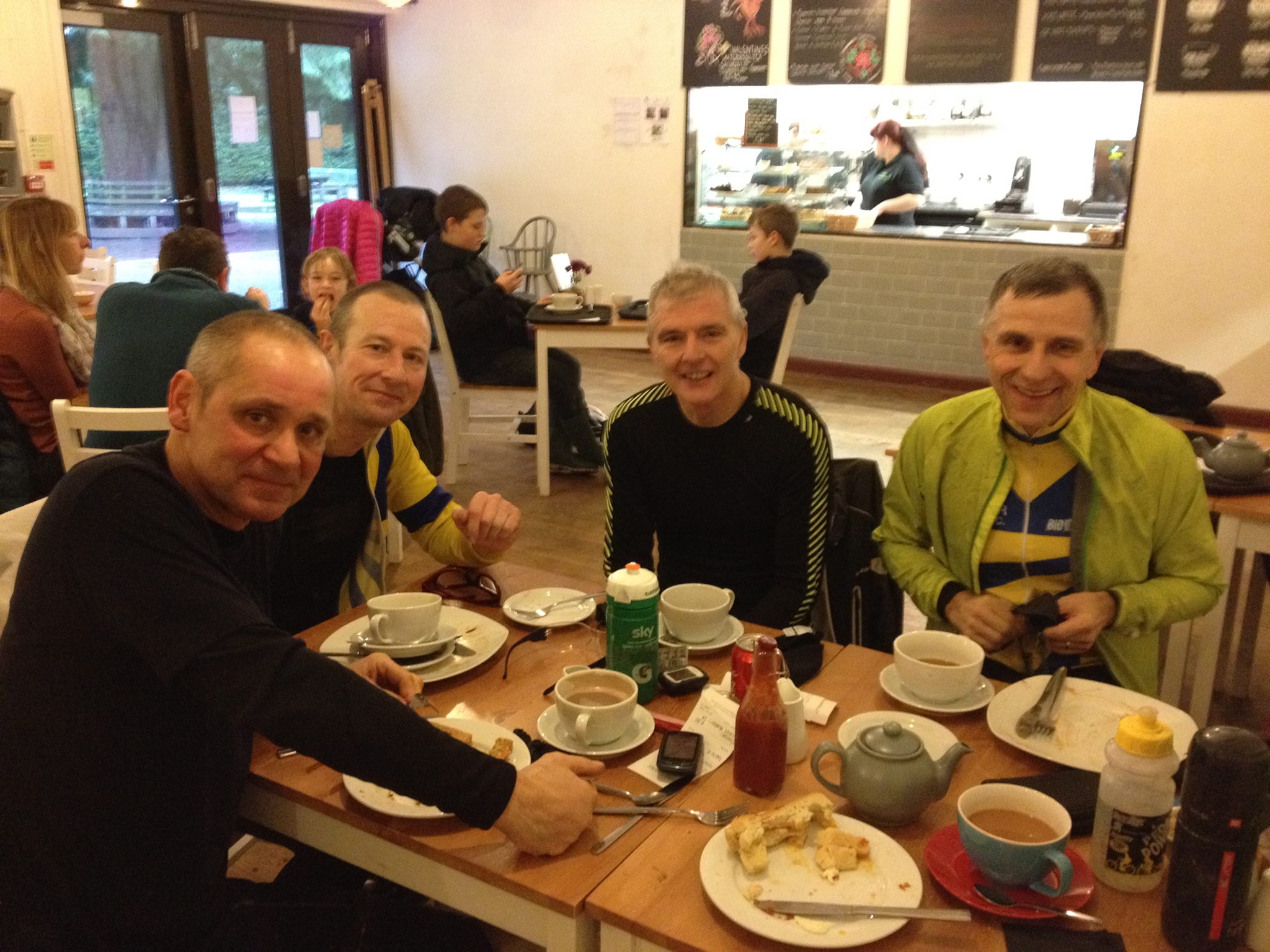