This series, in memory of the late Dave Astles, brings the start of the TLI evening events, and just as it did last year, we saw a build of 4 seasons in one day with Sun, Rain, Hail, Sleet, Wind & Cold change a number of times throughout the day.

As it turned out, when we arrived, the rain/sleet/hail had stopped, but the roads were still wet and it was cold, anyone would think it was still winter! You could see by the numbers of riders around that they had been put off by the weather.

Other WVCC members in the event were Matt Ellis in race 1 (under 45), just myself in race 2 ( 45 – 54) (Mark Adshead on marshall duty, John Keen was DNS, maybe still struggling with his knee, maybe the weather, maybe a bit of both), Kev Underhill & Ged Lacey (back home from Spain with a bump❄️💦💨) in race 3 (over 55 and over).

This was my first RR of the season, as i am trying to have a more balanced RR/TT season. My new road race suit arrive last week, just in the nick of time I thought, not bloody likely. Instead I opted for tempest socks, tempest overshoes, tempest 3/4 knickers, tempest arm warmers & tempest SS jersey, oh, and neoprene gloves!! I commenced my warm up, 20 mins of riding up and down farm/ salters lane, legs felt heavy, could feel the wind, fingers were cold❄️😩, hopefully feel better soon!?

Following the race briefing at 6:45, race 1 were away, next up race 2 with a field of around 20 riders, maybe a few more, a short neutral commenced with the flag dropping shortly after, I made my way down the outside towards the front sitting back just behind Steven Cartwright from Graham Weigh and Paul Thursfield of API-Meltrow. Soon a couple of little digs followed, not much reaction from the bunch, they didnt get far and were back in the bunch in no time,  I then noticed Paul Thursfiled drop a gear and then reach for the drops, he went and I followed, with John Crook of Liverpool Mercury on my wheel,  we had a small gap, I road through did a turn and flicked my elbow, and Paul came through, as I dropped back, John left a gap for me to fill, there were only 3 of us and already we weren’t working together! Paul must have had the same feeling and eased off, we were then back in the bunch.

As we approached the left turn of Smithy Lane,  there was an attack of the front from Stephen Blaney Green of team Kuota, Paul and I moved up to the front for the turn, which can be a bit gravelly, and it was wet, so best to pick your own line. Smithy Lane is a little rise before the A34, and generally where the main attacks that stick go,  Andy Prince Stafford RC went early and opened a gap, I then jumped over to him, caught and passed him on the RH bend,  by the time I was nearing the top, before the turn left onto the A34, I looked behind and was surprised to see I was on my own, oh well, I will just keep going and see what happens, its only another 25 miles! 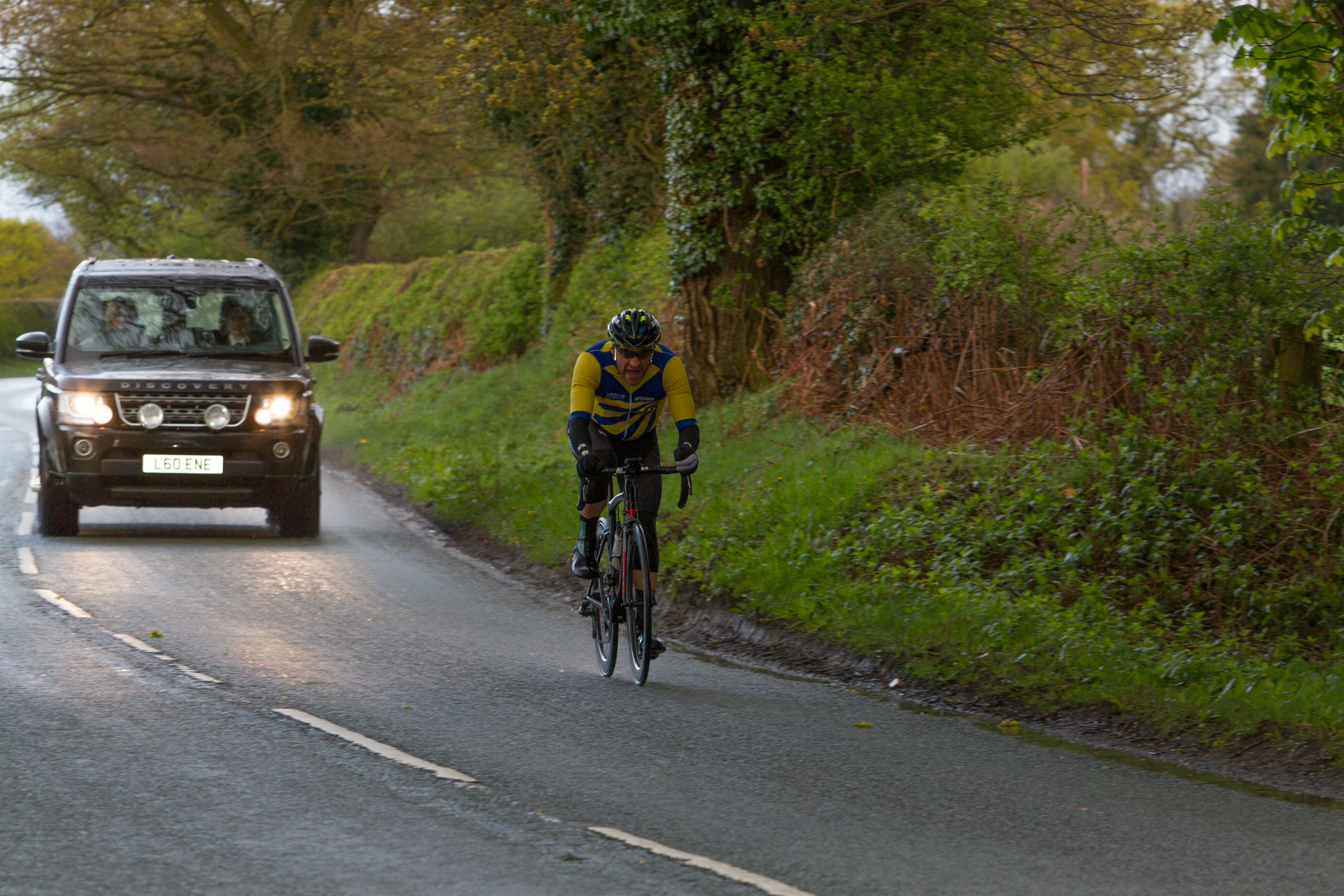 Lap and a half to go

It was a block headwind for the next 4 miles along the A34, up the rise over the finish line for the first time, the board was raised, 2 laps to go! I looked back, and in the distance i could see them, by the turn I had had about 40 seconds, although I had no idea at the time, I just had to focus on completing the next lap. I kept track of my power, I knew what I could sustain in a 25 mile TT, this is no different I kept telling myself.

I turned back down Trap Road, into the tail wind, I passed Nick Butterworth shouting words of encouragement, no idea what he was saying! I kept checking behind, but there was nearly always a car there which I couldn’t see past, still no idea of the gap! Out of sight, out of mind I thought. If I could just complete this lap with a decent gap, I would have a chance of staying away, then I would talk my way out of a win as it will never happen to me!

Back up Smithy Lane, another look back down the hill, nothing! Maybe (hopefully) they are messing around, following an attack, bringing it back and sitting up! Into the headwind A34, Nick had moved to about 200m before the finish line, more words of encouragement, still no idea what he said, maybe he shouted the gap? Over the finish line, the bell rang, last lap, another 11 miles. I heard “your well away”, so I didnt look back this time, just kept going. 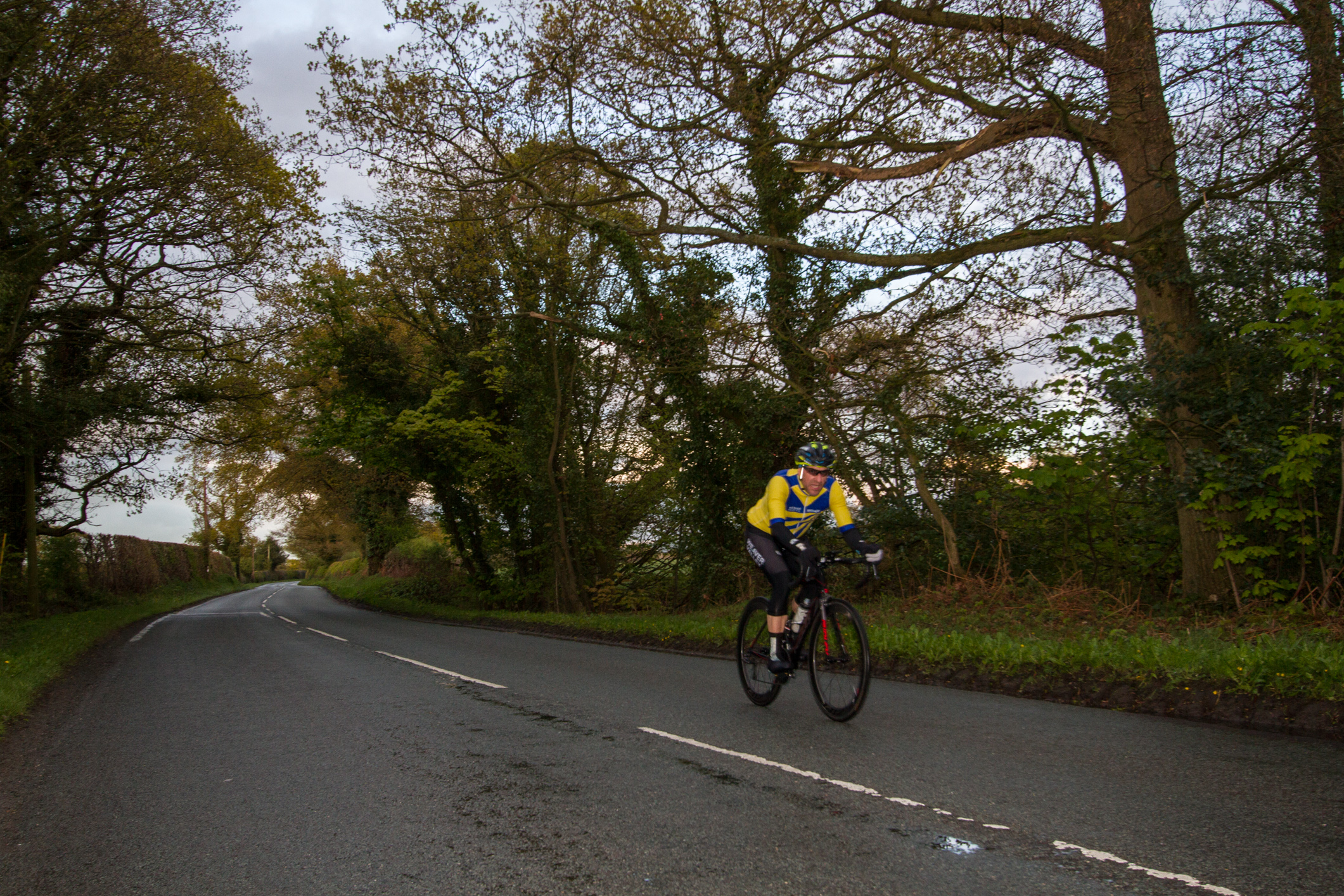 I turned left, I was now over a minute ahead (i was informed after the race). Left again down Trap Road, wind assisted, feet were now wet and cold from the spray on the road, up Smithy Lane for the last time, looked back down, again nothing, I now started to believe I could actually win this, surely no one can bridge the gap in the next 3 miles or so, regardless I was taking no chances, I still kept the power on. 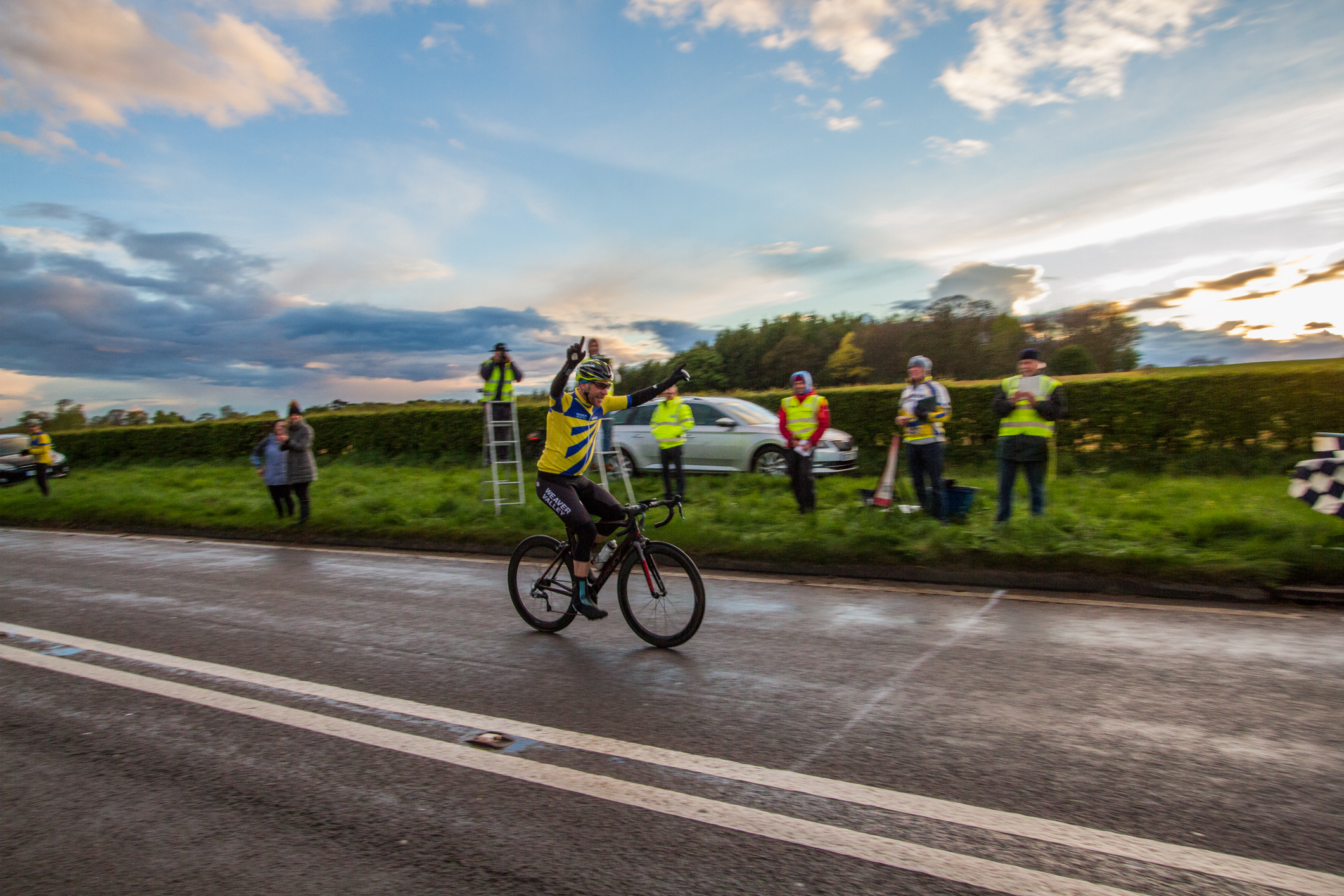 I approached the line, took a last look back, still couldn’t see anyone, arms raised for the first time ever, absolutely thrilled. I was great to hear Mark Astles shouting for me at the finish, I didnt know his dad, but I am sure a WVCC win would have pleased them both no end. The bunch sprint was won by Paul Thursfield to take second around 3 minutes back.

When I returned to the car, I couldn’t feel my feet, everyone around me were shivering, I struggled to get changed. Ged returned from his race, he was colder than me, I went to for a quick coffee, and Kev was in a right state, his choice of kit was made when he left for Leeds on Monday morning, he couldn’t get out of his wet clothes he was that cold, he even had to get nick to take his helmet and gloves off. Hope Ged and Kev are ok. I didnt see Matt Ellis, but I do know he was also suffering with the weather. 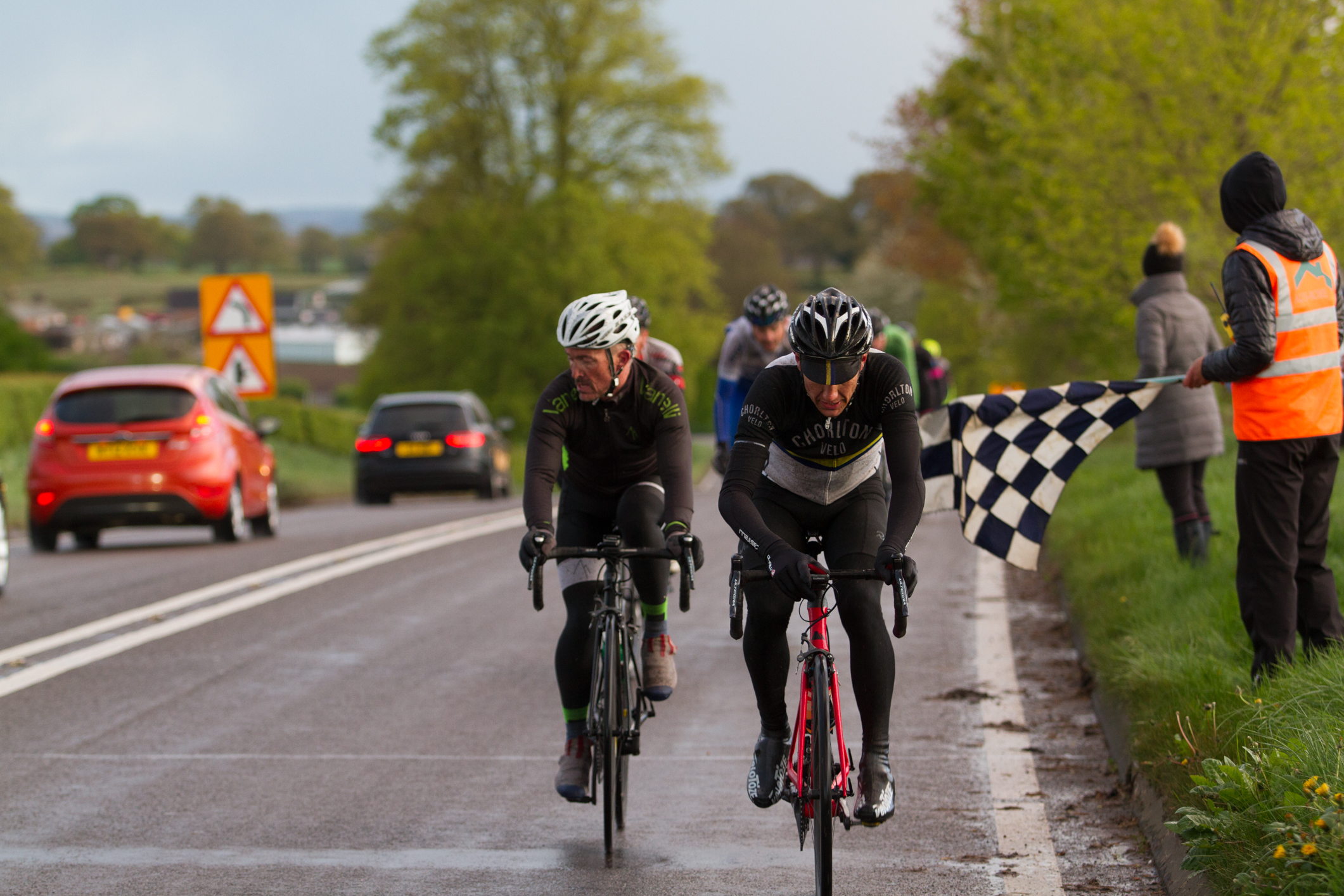 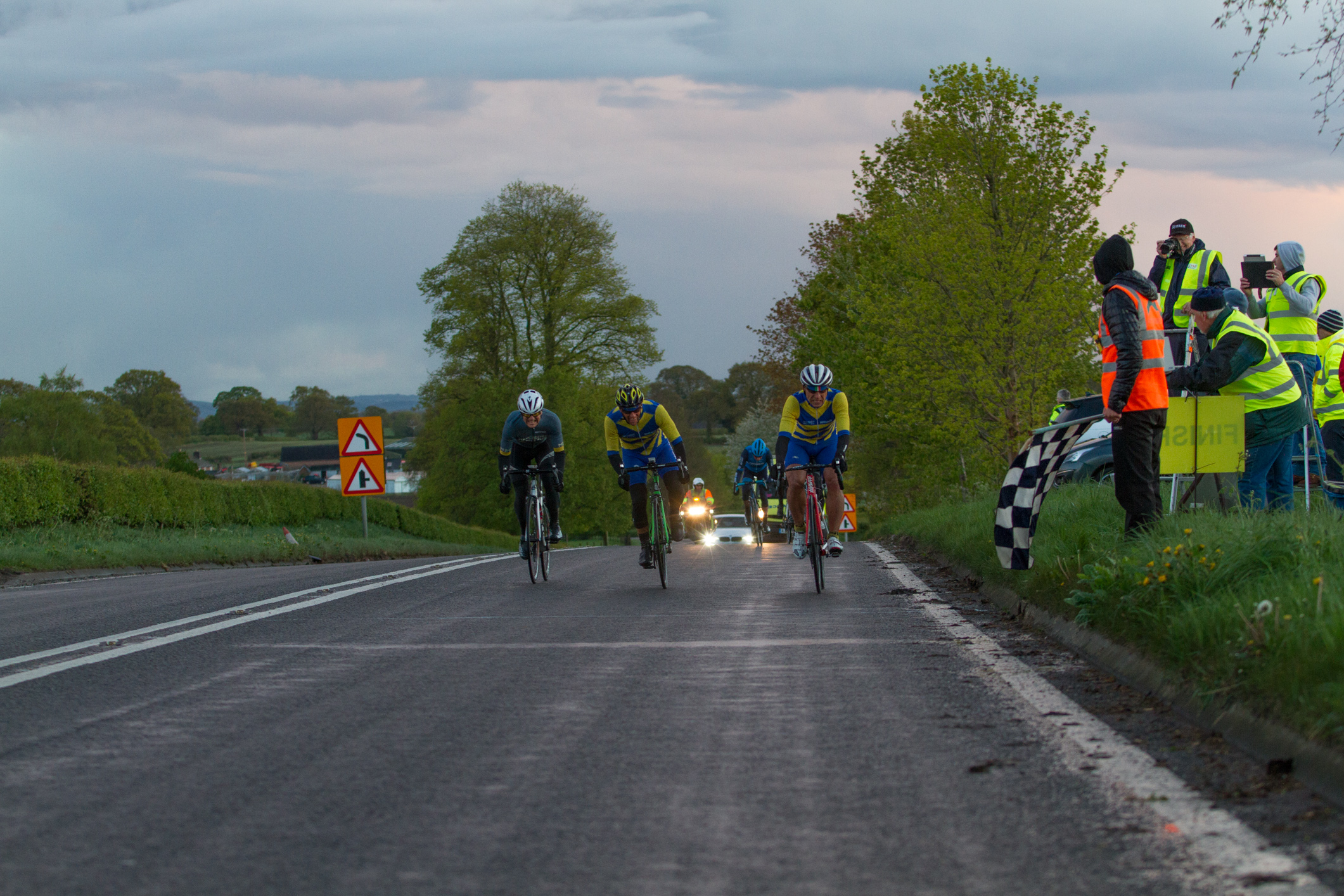 Ged & Kev Batte it out

I am marshalling next week, so whatever the result, at least you wont have to read all this nonsense.😂