So, Mr Ady Japp has been daft enough to provide me with blog access! Though I promise to use it for the greater good of cycling and not to bang on about food – as delicious as nachos may be.

As most of you know, I’ve spent the year steadily upping the racing I do by attending open time trials, which I’ve really enjoyed due to the friendly atmosphere and the challenge of testing myself over different distances and courses. The next step logically was to finally try a road race, so when I saw there was a Cat 3-4 criterium on the Stephen Burke Sports Hub in Nelson, Lancs. I thought I’d give it a go. If anything it’d mean Eleanor Underhill and Heather Bamforth could no longer tell me off for not trying one.

Saturday came and the forecast was for a foul wind and heavy rain, but I’d decided I was going to try racing so off I went cold and all, somewhat hoping I’d do better as there would be a few DNS’ due to the forecast.

I arrived at the circuit in good time, though realised at sign on I’d needed a BC racing license, so immediately had an IOU to the club for £10 for a day provisional as I didn’t have cash out. Oops! Then in getting my kit together I realised I’d taken two right gloves. An amateur start!

So off out for warm up and to learn the circuit, which is a 1km loop where they’ve varied the corners so that you need to make three turns each end, rather than a simple track-style to and back. It was obvious straight away that the finishing straight was going to be right into a strong headwind, so Heather B gave me some useful advice not to attack into it and also not to hit the front there either. The race was to be 50 minutes, with 2 prime sprints – one at 15minutes and one at 30 with prizes for the first line crosser. 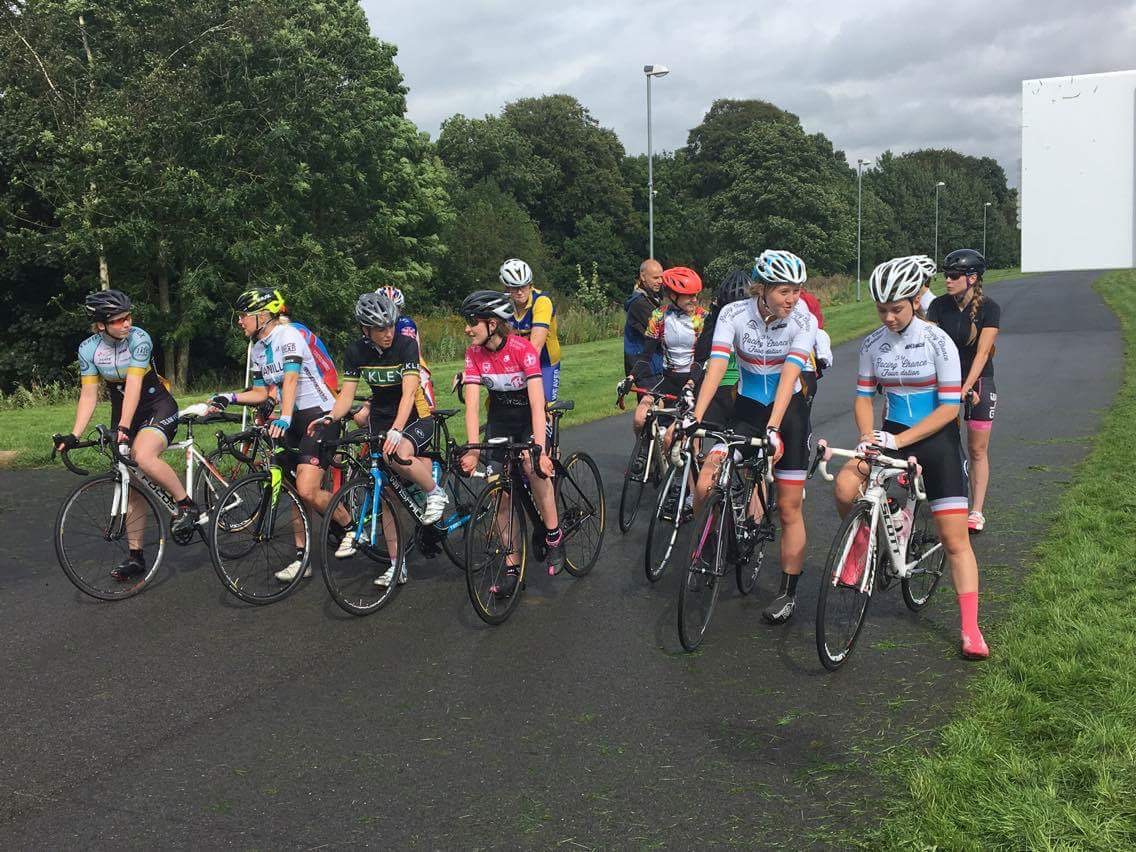 Ready for the off

Off we went, the bunch whittling down by a few almost immediately as not everyone stayed together into the corners. The Racing Chance Foundation girls got off to a strong start, leading us for the first few laps. My plan for the race had just been to make sure I’d stay with the main bunch, so I kept working my way up slowly to be sure I didn’t lose anyone, eventually hitting the front into the tailwind down the back straight, then trying to peel off ready for the turn back into the wind, but wisely no one wanted to come past which meant I broke Heathers advice pretty quickly! (I had also noted that as easily the biggest my wheel would be a welcome relief to some!) The first prime sprint was the next lap so whilst I was at the front still I dug in a bit to string it out, then happily sat back in as the sprint went (to be won by a Racing Chance rider) and tucked back in. 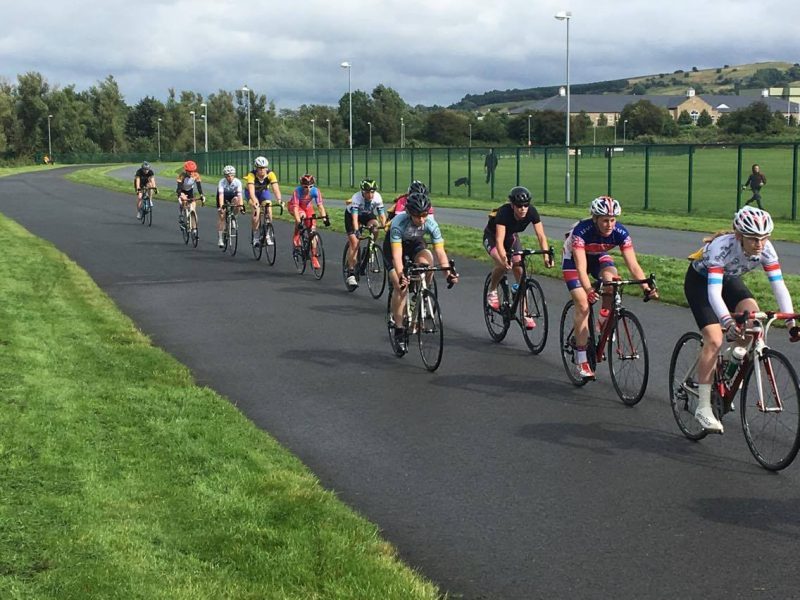 The strung out race, early doors.

We all carried on together then for the next 15 minutes, and for the next prime sprint I found myself at the front again in the lead up (doh!), so I slowed right down into the last corner so that I wouldn’t end up leading it out. I didn’t think I’d win the sprint, so decided to save my energy, and Charlotte Gorman of Bury Clarion took it out followed by Samantha Wilson of Army Cycling.

I didn’t panic at the slight gap the sprint had brought them as I figured we’d work to come back together with the front two ladies slowing…wrong! The two ladies worked together brilliantly to kick away together, and the 4/5 girls I was then in a group with needed to work to reel them back in, however after a couple of laps it just wasn’t happening; so after the first corner and into the tail wind I kicked away from them and decided to try to catch the two-man break solo. 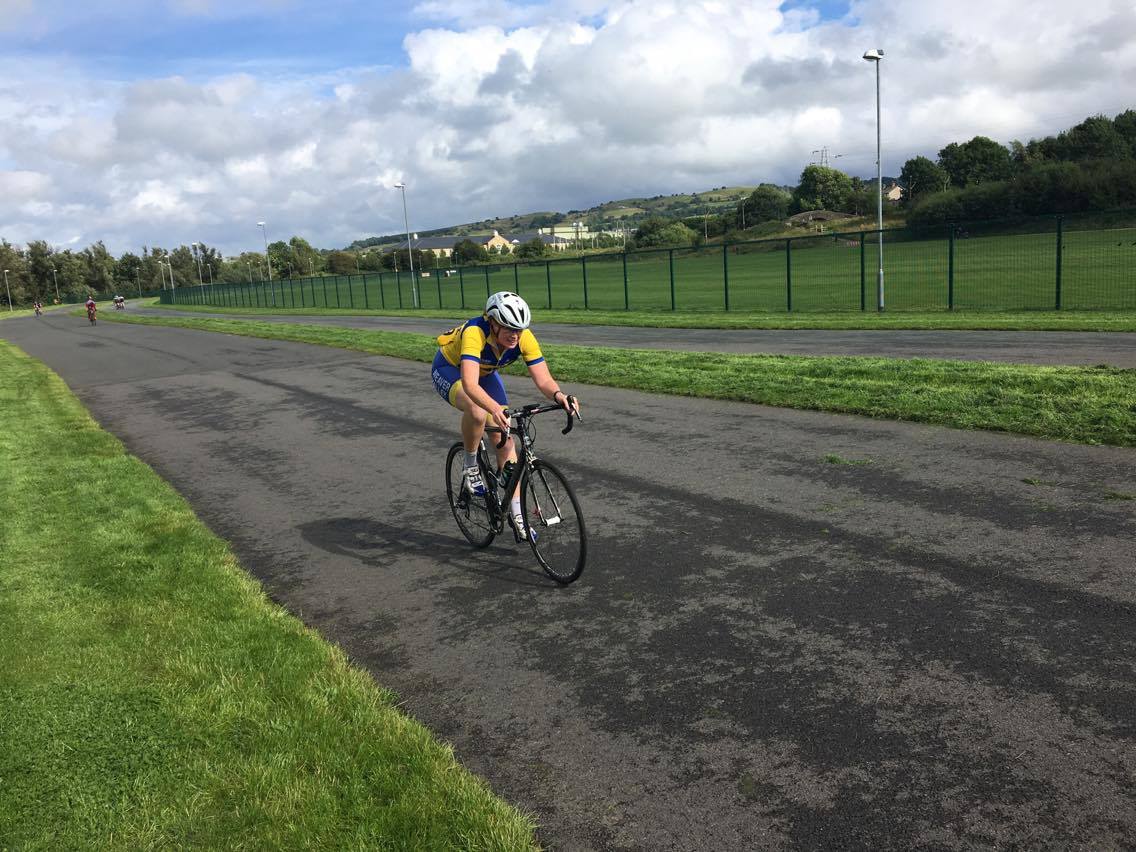 A gritted teeth solo effort into the headwind.

The fun started there really, I could tell they had about 10-12 seconds on me, so I pushed away with Heather and Fred yelling “TIME TRIAL, CATCH THEM!!!!!” and lots of encouragement from the others watching too. Heart rate maxxing and breathing sounding desperate I worked as hard as I could to get them back, but it was really difficult as every time I got round to the back straight I’d be treacle pedalling into the horrid headwind. About seven laps or so of giving it everything and the gap was 4 seconds, but I just couldn’t close it on my own into the wind, with Charlotte and Sam doing a great job of working and resting. I was laughing to myself with three to go that even if I did catch them I’d be so tired they’d drop me in the sprint finish anyway!

That was it then really, a guaranteed third place as no one was close behind me, and I just enjoyed the last lap as 3rdwas way more than I’d even hoped for in going to the race. I had me a little solo sprint to the line and finished completely knackered but chuffed! 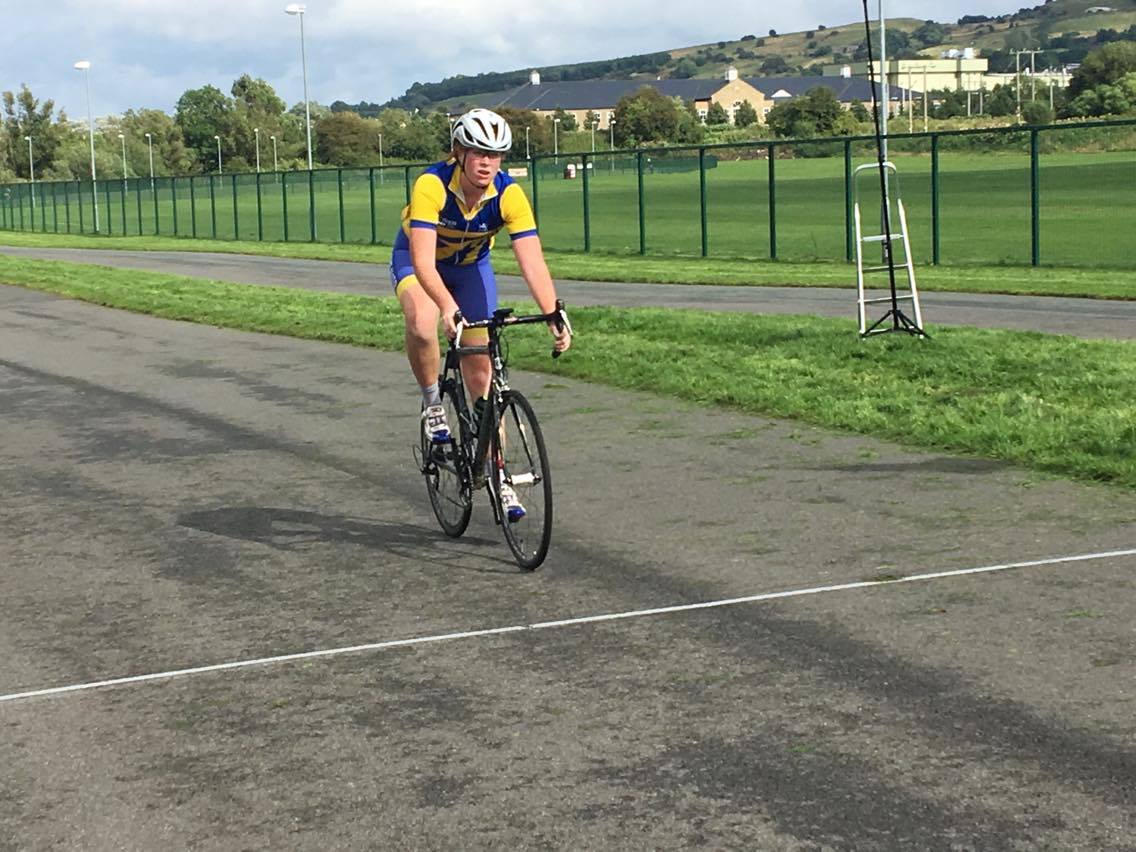 Some lovely words from folk at the finish saying it was exciting to watch and that for a first race I’d done really well, and mostly Heather saying “well what’s your excuse for next year now then!?” Then it was prize time and I’d won a bottle of what looked like Sourz Apple shots (but having tried it it tastes really awful, so I think I’ll just use it to clean my bike with) and £10 in prize money – which as it happened came in handy for paying back my day license! 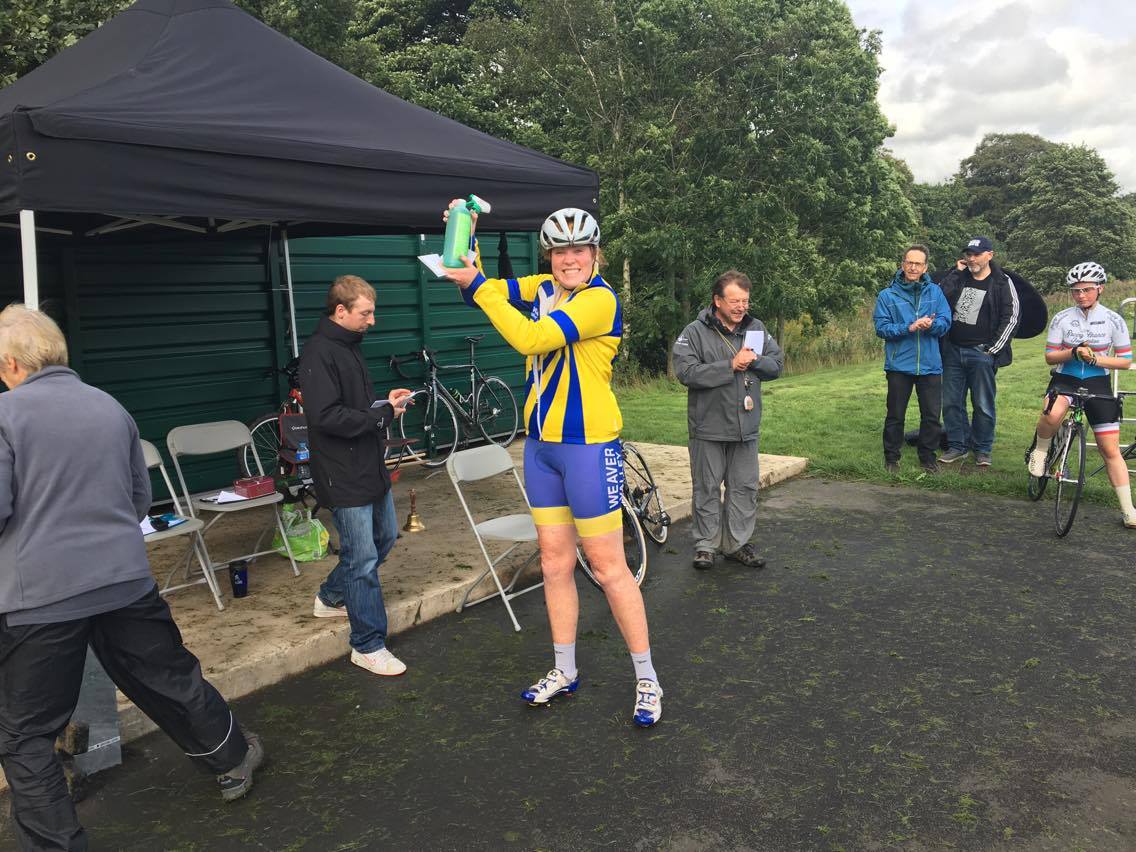 So there we go, first race done, and a great experience. Luckily the rain held off too. Would just like to add my thanks for the lovely comments I’ve had since, I love how supportive and encouraging this club is.

P.S. sorry quite a long first blog!! Will try not to do a Dave Fearon next time. Results below… 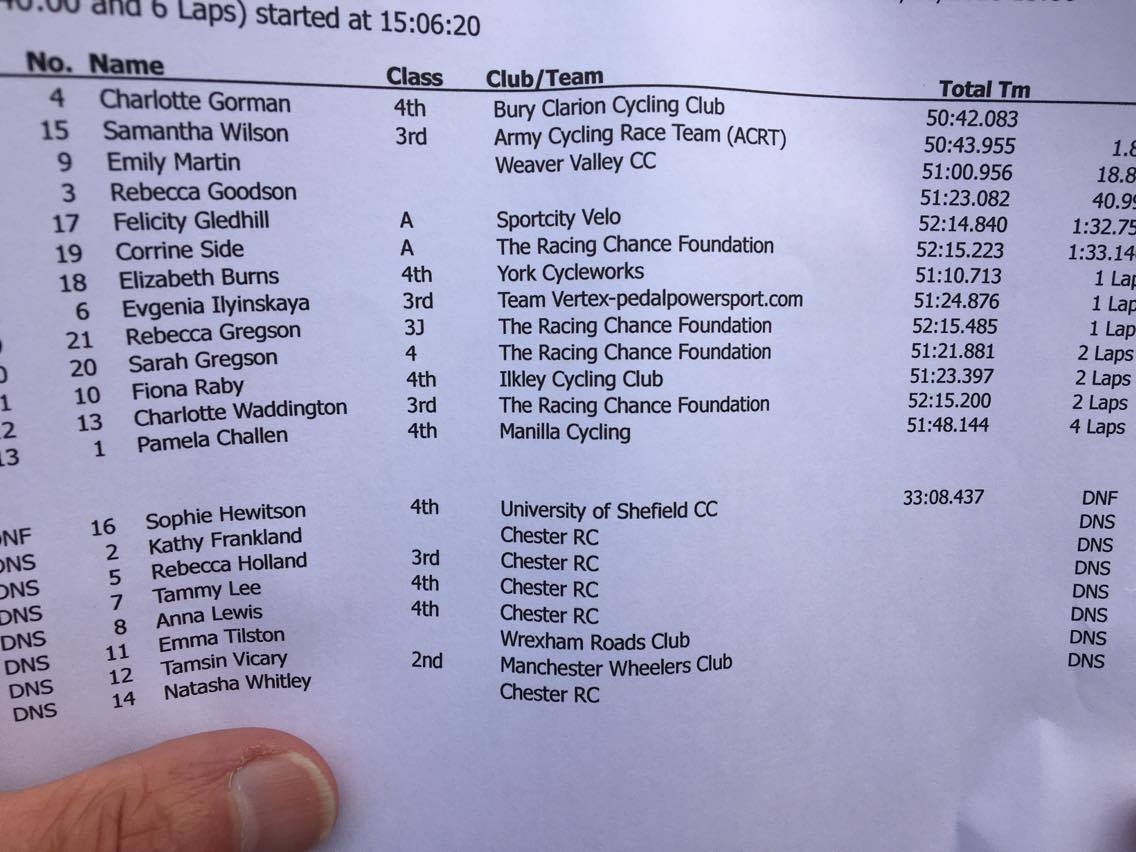