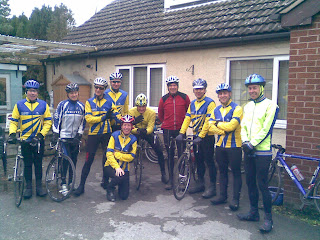 The WVCC Allstars team at Two Mills. (What will it take to get Chris, Keith and Graham into club kit?!) (Craig you’re allowed – for a bit anyway – because you’re new: the others have no excuse!)

Lots of people at the Royal Legion this morning – most decided to go with Alan on the short ride to Beeston and about ten of us went on the longer ride to Two Mills. Graham led us on a circuitous route through the Forest, left up the hill towards Kelsall (allowing Kev to think we were going straight on, thereby catching him out in the wrong gear tee hee) and then on flatter terrain through Waverton, past Chester Zoo and through Backford and Capenhurst for a sprint finish to the cafe – Kev got his revenge on Graham with a well-timed jump past a tractor, which left the rest of us stranded 100 metres behind him.

Ian, Lou, Dave Astles, Kev, Graham, Richard Munro, Chris Latter and new riders Craig and Pete made it to the cafe where we met Keith (and Paul who’d diverted off from the shorter Beeston ride). We legged it back, with Keith putting in the odd acceleration to upset us all, and then a race back through the Forest with Kev pipping Keith to the finish. My computer showed 58 miles and an average speed of 16.6mph at the end. It was hard work but through judicious wheel-sucking I survived OK.