Cloudy with a risk of cake and wasps

This morning saw a large gathering at the legion, and after the usual shout from Captain Silver, the large long group headed out for Holt via Bangor on Dee.

We were to head to Wheelock, via the Cloud, for a bit of hilly enjoyment. When the mutinous murmurings had finished after the mention of the Cloud, we set off at a steady pace, and meandered out to Goostrey, Twemlow, Siddington, Gawsworth, then onto Bosley Crossroads, before turning right towards the Cloud. Despite saying that she didn’t have the legs today, Emily rode well up the Cloud at a steady pace. New rider Ian rode well off the front, followed by Spanish Jed, who is in the country on a 2 week visa, before being deported back to Espana.

Interestingly enough, after the climb, the normally quick descent had just been resurfaced, you know, in the time honoured fashion of laying a tar substrate, then dumping 3/4 of a metric ton of chippings per metre all over the road. This made the descent quite interesting, never knowing whether to drag the brake or let go and hope for the best. At this point Jed suggested shutting your eyes on the descent. This I think he did, as he overshot the second sharp bend, narrowly missing taking a well earned rest in a hedge…

Alan decided that would be enough of hills, so we followed the well ridden roads through Astbury, Brownlow, Hassall Green. Two miles before the cafe, Steve decided it would be a good time to have a puncture though. Some went on to the cafe, some waited whilst a cast of thousands gathered to repair said flat. We then made our way to  the packed out Wheelock (bank holiday weekend after all).

While we queued, Emily was clever enough to have brought peanut butter sandwiches with her (smart move and saves queuing), so replenished her dropping energy levels in short order.

The rest of us queued. Captain Alan taking a crafty look at the cakes to see where his next confectionary journey might take him. I ordered first, and Alan second. We took our trays out with teas and cakes to the table. Before I could move my teapot, milk and cake from the tray, Alan had sat down and devoured all of his cake(s), before any of us could see what he had. By the Captain’s account, it would only have been a blackcurrant slice thing and a chocolate flapjack. Hmmm. We only have the remains as evidence. 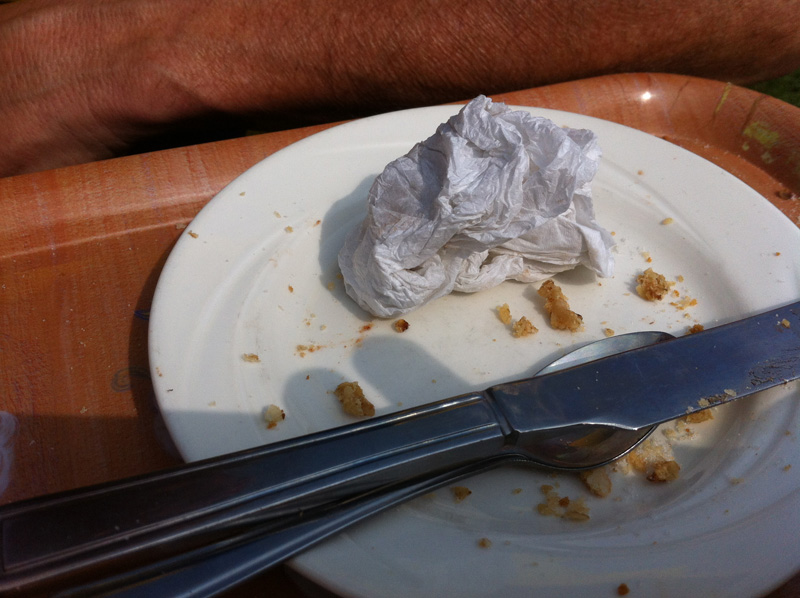 Not much evidence to go on your honour...

It was a day for wasps, and they took great delight in trying to share cake with Lou. Lou took exception to this, and was seen killing wasps by the dozen with a spoon, before eating them with cake. 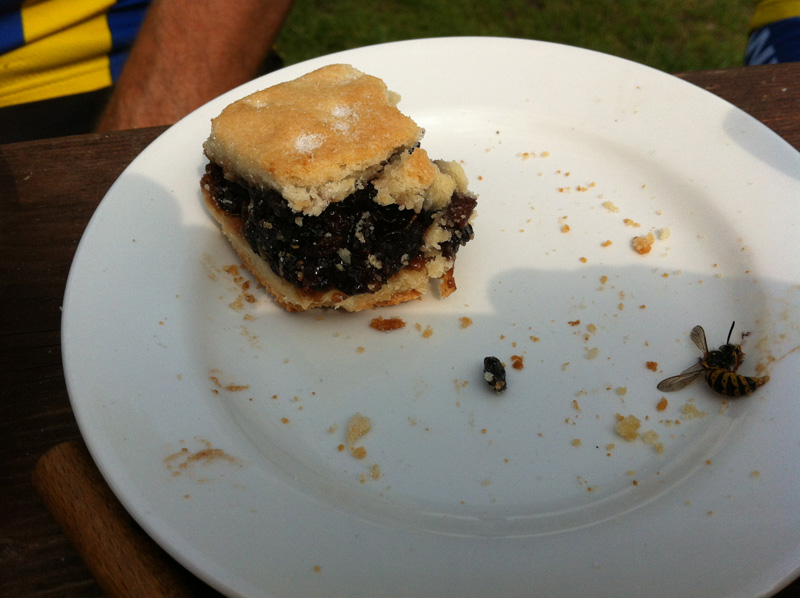 Much swatting at said stripey creatures was the order of the day, with accompanying mirth, whilst Al chuckled at his cake gulping ruse that fooled us all. We’ll never know the truth. 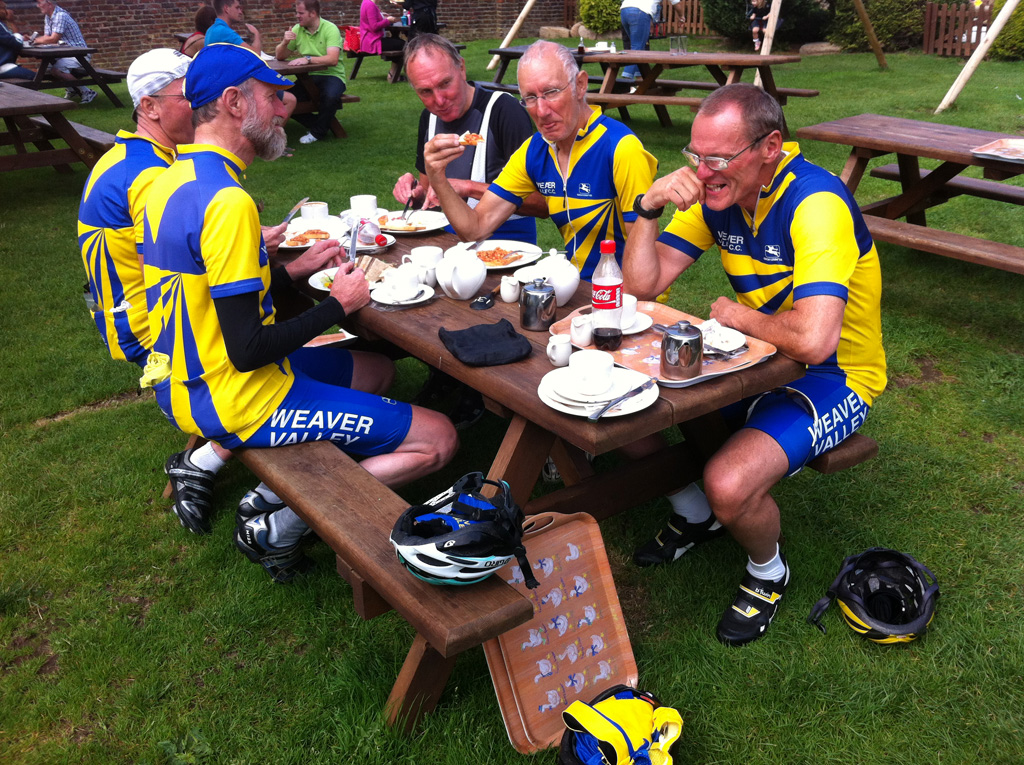 An excellent ride out on a superb day. Hardly any wind but a bit muggy. A top day out. Another great ride lead by ride meister Al. 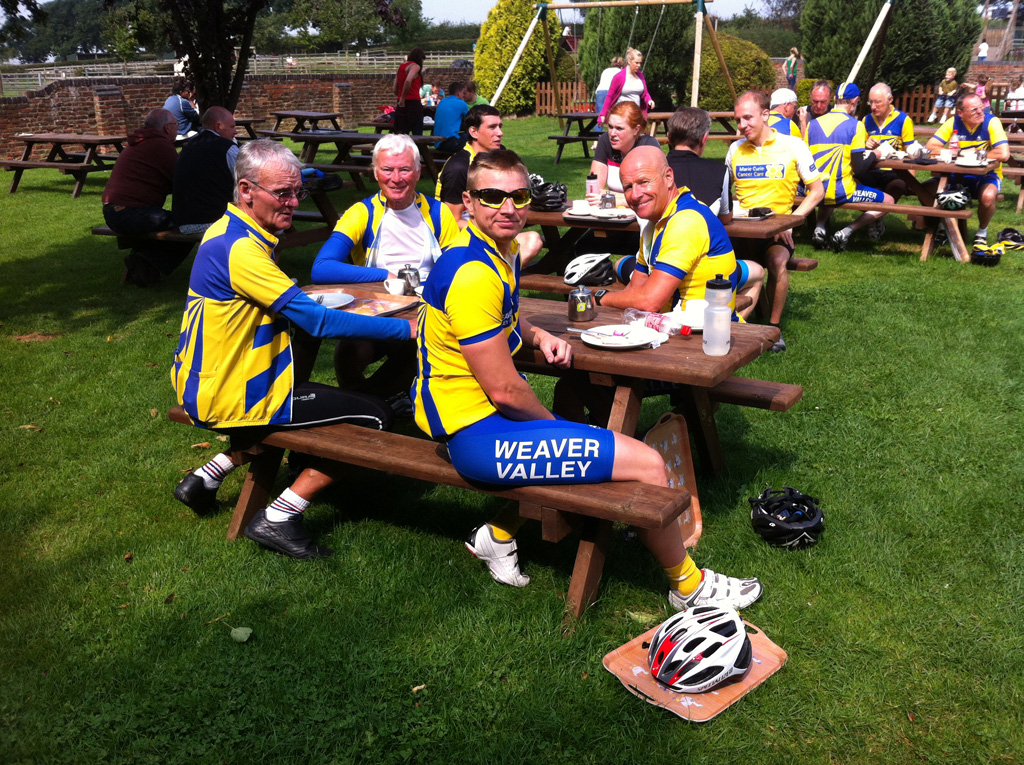 The happy band of cycle pedalling types, resting after a superb ride out. 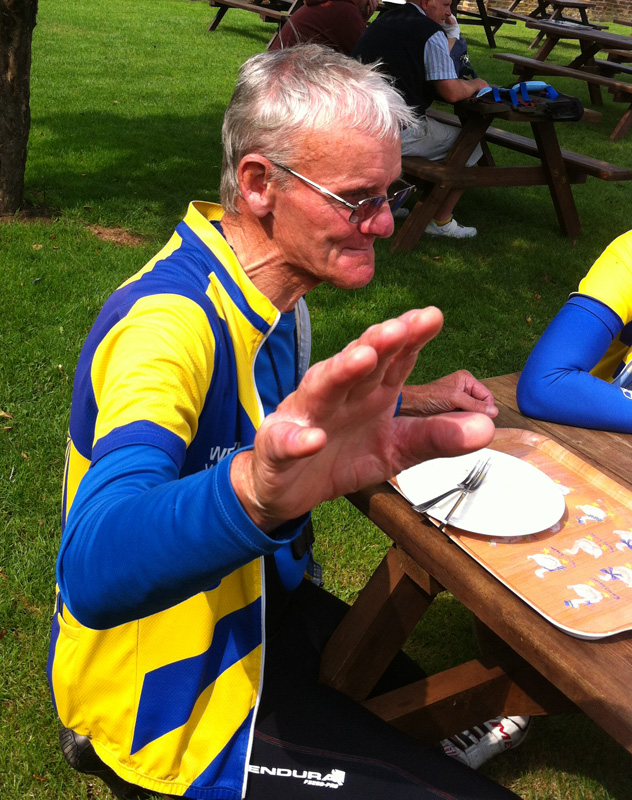 Jack did complain that I hadn't got his best side, and then went all prima-donna and shy at the same time about being photographed. These media luvvies!