A guest blog here from Paul Harding, following a brilliant, (if busy) trip to Cannock. It’s been a while since I’ve returned from an MTB ride and thought, ‘I really must dust my bike’ 🙂

April’s MTB away day was a visit to Birches Valley, Cannock Chase. With a prompt 10am start on the cards I rolled up into the car park and was ready for the away. Unfortunately, I was the only one there, not helped by the fact that I had not informed anyone else that I was going,so all self inflicted. A text and call to Matthew pleading to get the news that he was on his way ended at the dreaded “Leave your message after the beep”.

Oh well, my fault and no point losing time on a lovely April Saturday. So off I shot into the aptly named “Twist & Shout” only to get held up by a massive group outing. It was a perfect time for a break as I had cleared about a mile so I called Matthew on one last off chance he had found his phone. The good news for me was the both Nick Butterworth and Matthew had arrived so I made my way back to the car park.

Off we went as group of three.  I had the slight advantage of already being warmed up and took it on the chin when Nick called out to me “So it’s going to be like that today then” as I took the lead down the trails. I knew that Nick’s fitness would soon take over as my energy levels started to drain. 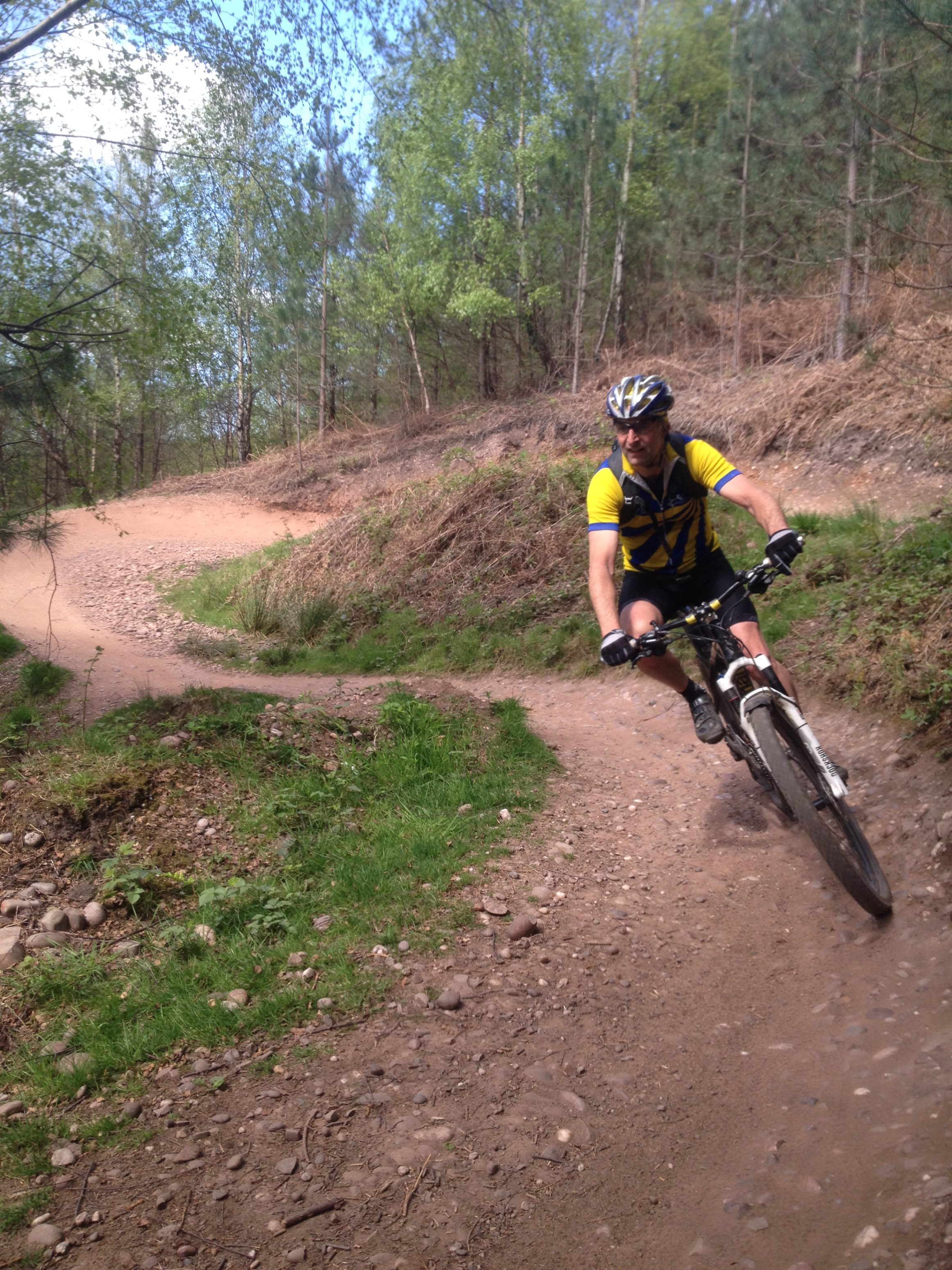 Just look at this! How ace does that look? Why do not more WVCC members not come mountain biking?!

As we caught up to the massive group we approached the descent called the “Devils Stair Case”. Matthew was not satisfied the he hadn’t cleared it so went back to have another bash once the traffic had dissipated. We crossed over the railway line and avoided the Black sections, although to be honest some parts of the Red routes were pretty close to be classified as Black in my opinion. We quickly completed the “Insidious Incline” before crossing back over the railway heading along “Time for Brew?” and eventually reaching the Visitor Centre.

As we sat in the sun refuelling I noticed that a blister had started to form on my hand and a red mark on the other. ‘Put a plaster on it’ was the call to action, which I promptly did before we stated another loop. All fired up we took on the “Follow thee Dog” route for the second time. This time the course was predominantly empty so we bashed our way around with each of us taking the lead at one point or another. 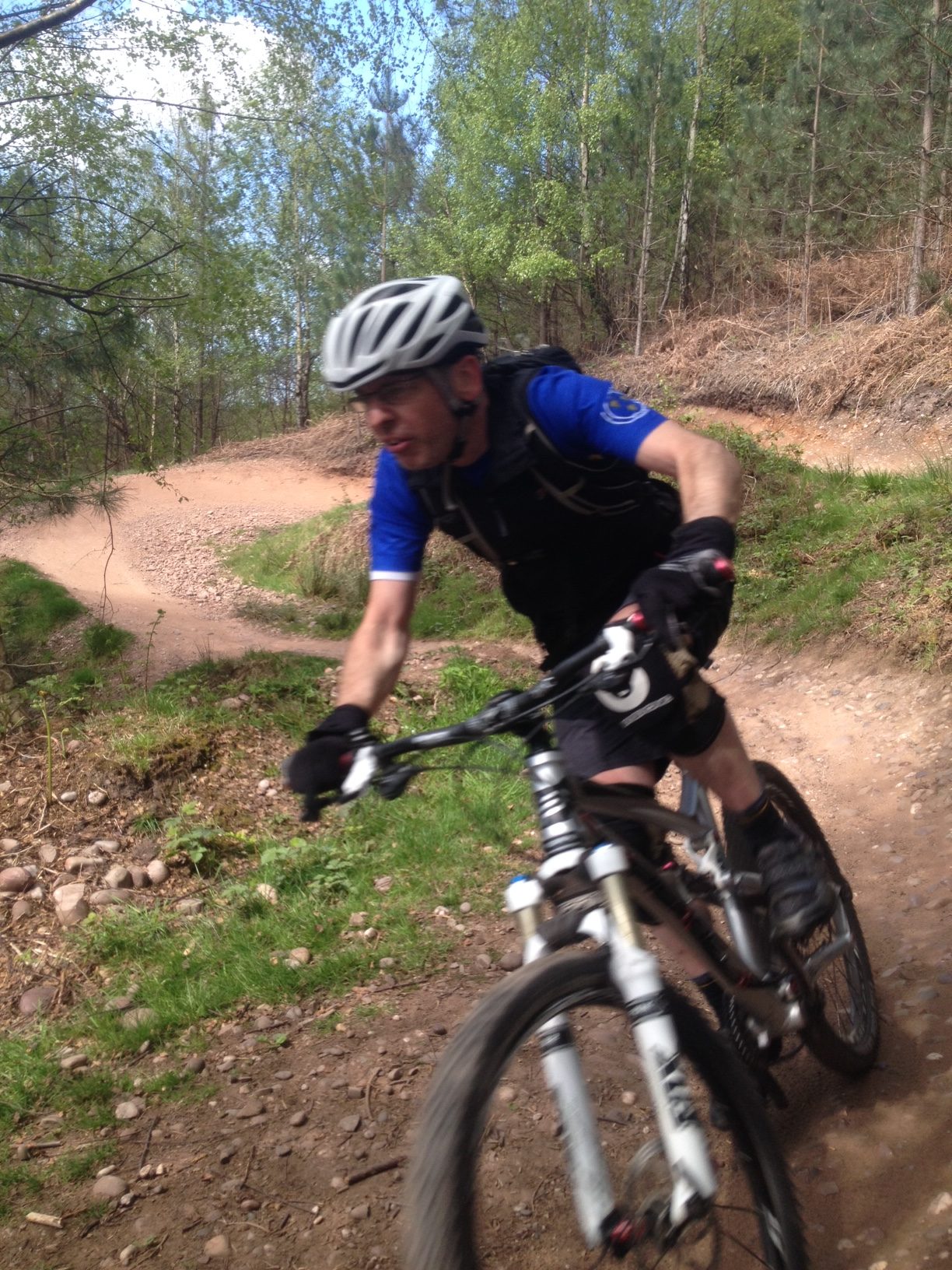 Matthew then hatched a plan for a diversion, which by surprise took us over to the downhill area called Stile Cop. We checked out the map and cycled (most of the way) past the downhillers all covered in their body armour looking for the easy(ish) route down that avoided the multiple six foot drop offs. From here we found our way back to the trail and headed for the Visitor Centre.

The “Evil Slab” was crossed and blister number two started to shout out. The pace quickened as we approached “Snow White” before nearly taking out some walkers who had ventured into the trail. The “Seven Dwarfs” were conquered and the “Pain in the Hardtail” now meant the blister number three was on its way. Finally we all completed the “Rock n Rollers” with me hanging on at the back and arrived at the Visitor Centre for the second round of tea and cake (or ice cream).

Checking out my hands it was now clear the three blisters were in full bloom although the one with the plaster over it was only in bud. Nick then pointed out it might have been a good idea to have put plasters on all the bits that starter to show the signs of blistering when we stopped the first time. I thanked Nick for his timely advice before we prepared for our homeward journey.

Yet another great day out with Weaver Valley MTB riders.