I’ve heard of the route known as the Bingley Bash before, but never really considered it as as one of those ‘before you die’ rides, however the description given in the Singletrack magazine that plopped through my door a couple of weeks after Christmas was a bit enticing, so there’s a plan as good as made. Given the fact that it never strays too far from civilisation, (actually, the whole ride’s in Yorkshire, so perhaps civilisation isn’t quite the correct adjective 🙂 ) and doesn’t cross the highest moors it also looked like a good bet for a February ride that wouldn’t get a proper weather battering.

That assumption didn’t look too safe on the drive over though, as first the white lines on the M62 disappeared under snow before reaching the Manchester orbital motorway then everything disappeared into fog while crossing Blackstone Edge.

In the end though, the weather didn’t turn out like that for the main ride. It was a chilly start, but on the ride we had not a drop of rain the whole route. And what a route! The map did make it look like there’d be a fair bit of road portage between the good bits* but in the end there was very little. We started from the lovely Oxenhope terminus of the Keighley and Worth Valley Railway, where thankfully after the other week’s Delamere trip the pre-ride brew was back on the menu in the railway carriage buffet. It took a couple of missed turn and detours to get tuned into the map reading and Garmin following, (Kev was quite surprised that his trusty navigator announced we’d arrived at our destination after about 1/2 a mile) but we were soon on our way over the Black Moor towards a cracking decent following the boundary of a landfill site and on to the village of Cullingworth. 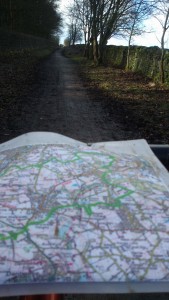 After skirting the village of Wilsden we happened across the Bradford Scouts campsite at Blackhills, which Tim recognised as he’d stayed there as a youngster, then on through Harden to St Ives Estate

Where we rode past the cafe!

Shortly after we were on the return leg and ploughing into the prevailing wind up Druid’s Altar and across Harden Moor. 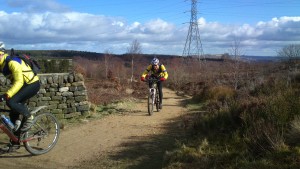 Steve putting down the power across Harden Moor.

From here we followed more techy tracks, proper little slippy, nadgery little affairs in places where Nick, standing at the bottom of a muddy chute taking pictures nearly got wasted by by a slightly out of control Steve. Finally it was a few miles back towards a path following the river and railway valley back to Oxenhope. This is where we were treated to the magnificent class 37 Diesel Electric engine pushing a maintenance trailer down the line, pausing long enough at the points for a decent picture. 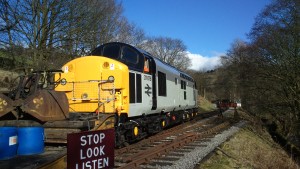 Look, it’s an engineers thing. You don’t have to look it up on Wikipedia, but how ace is that?

So, a second stop at the station buffet, pie and pea delicacies for most of us before the trip home for some or a lap of the reservoirs to the south for Tim and myself. I’d been pretty dismissive of the need for gears on an MTB earlier in the day, but trying to follow him up a rocky climb into the face of a sleety gale had me wishing for that bale out option.

In the end a superb, full day out for the fat tyre gang. Fancy a bit of this too? I’m planning a ride what you have, beginners or returners ride on the first Saturday of March. BSO, hybrid or CX bike or anything of the chunky tyre variety. Keep an eye on the Facebook or forum over the next few days. 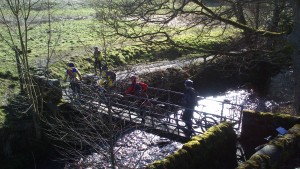 *Just in case you’re wondering, the good bits are the muddy bits, the slippy bits, the rocky and rooty bits. The bits over the moors and through the woods, Particularly when the bits point DOWN!