Big butties and badgers, and cycling

Thought I’d better drag my backside out of bed and onto  bike for a change, so I did.

The usual suspects at the club, and a new face, out with us to see what this club cycling lark is all about.

We were to ride a nice, relatively easy short ride to Dunham Massey, Derek expertly taking up his navigation duties.

The long run went off before us (they were greater in number than our nine), and we quickly caught them, on Burrows Hill, as Titch had already snapped his chain, and they had to stop. Clearly, a long lay-off the bike hasn’t diminished the power that the lad can put through the pedals.

On we went, John joining us instead of the long run, as he said he had to get home early for some rehearsals. This time, his good lady, rather than him in the theatre spotlights.

We opted for a usual route through Davenham, through the first of many traffic lights for road works. At least their is some work going on to repair the shocking roads that we must cycle on.

Davenham gave way to Lach Dennis, then a turn towards Plumley and Knutsford.

We headed towards Tatton Park, and had a pleasant pedal through, spotting Great Crested Grebes showing off on the water, and the sound of Chiffchaffs in the air. Spring really felt like it had arrived today.

We were soon at Park Road in Altrincham. The pot holes looked as though there had been a bombing raid om the road. We gave up shouting ‘hole’ and ‘below’, and a request from the bunch asked if we could just shout when there was some smooth tarmac to rise on instead.

We crossed the main road, and John shot off the front to start his way home as we turned for the cafe. And so we were eight.

We were nice and early, so were served promptly, with plenty of food. The usual beans on toast etc, and then, served last, came Johnno’s request. He’d order an egg and bacon doorstop. That must have been some door. This was a seriously large chunk of food. Johnno had to resort to unlock his jaw, as a python might when trying to swallow a deer whole.  Thankfully he managed it, and now would just have to cycle home carrying the gargantuan weight of the delicacy. 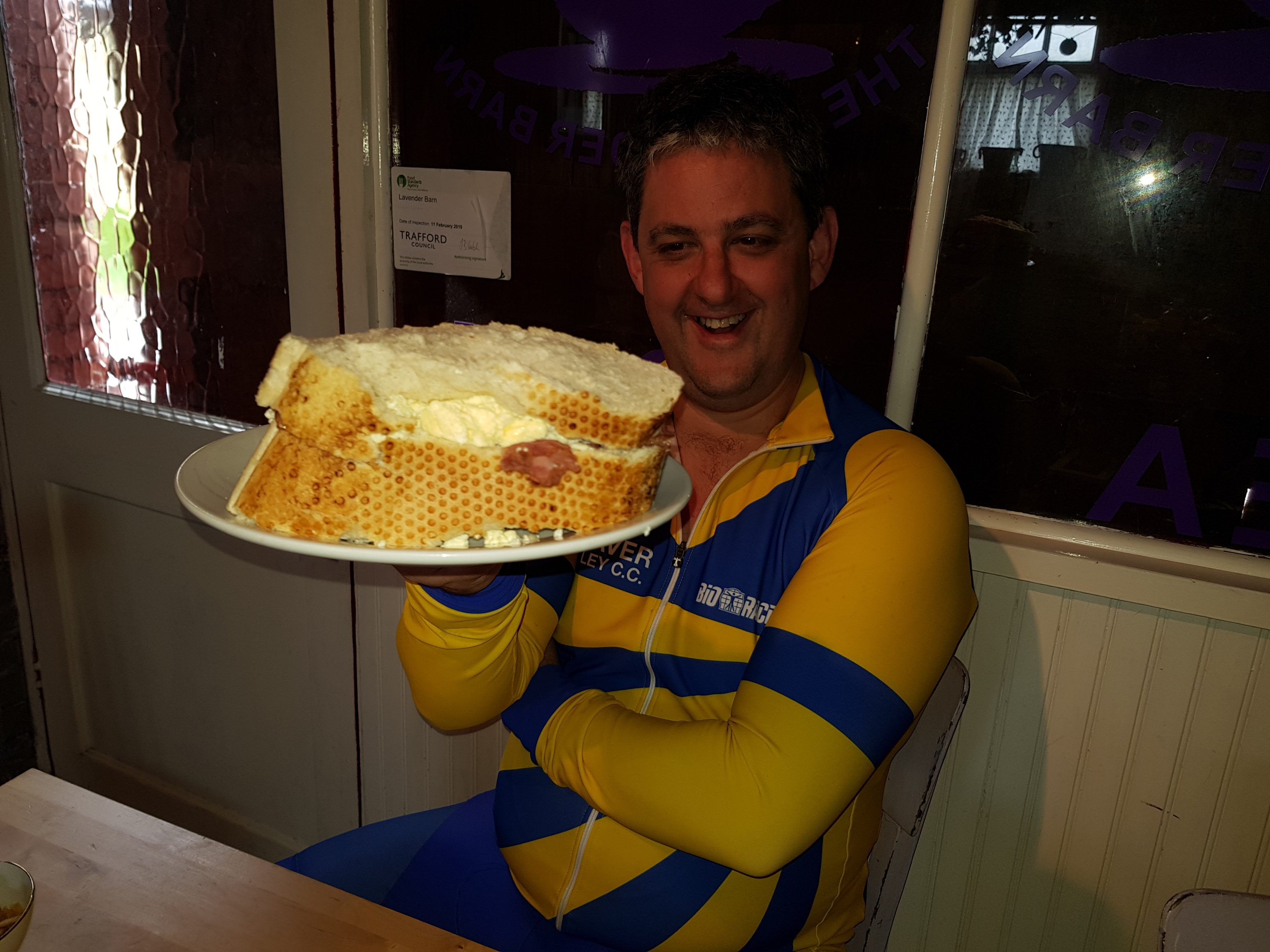 Really? We may be here some time.

After a brief dinner time conversation about doping, general drug use, and big butties, we gathered our gear and left.

Re-tracing our steps, we made our way through road works, and lanes, and were soon back near to home. Here we turned towards Gt Budworth, down an accessible lane for cyclists and walkers, but not for motor vehicles. This was due, as Derek had posted on Facebook, to badgers also protesting about the state of our roads, to the extent that they had chose to undermine the very fabric of our transport system by burrowing their sets under the road, making the roads generally weak. We managed to get past without falling into their lairs. 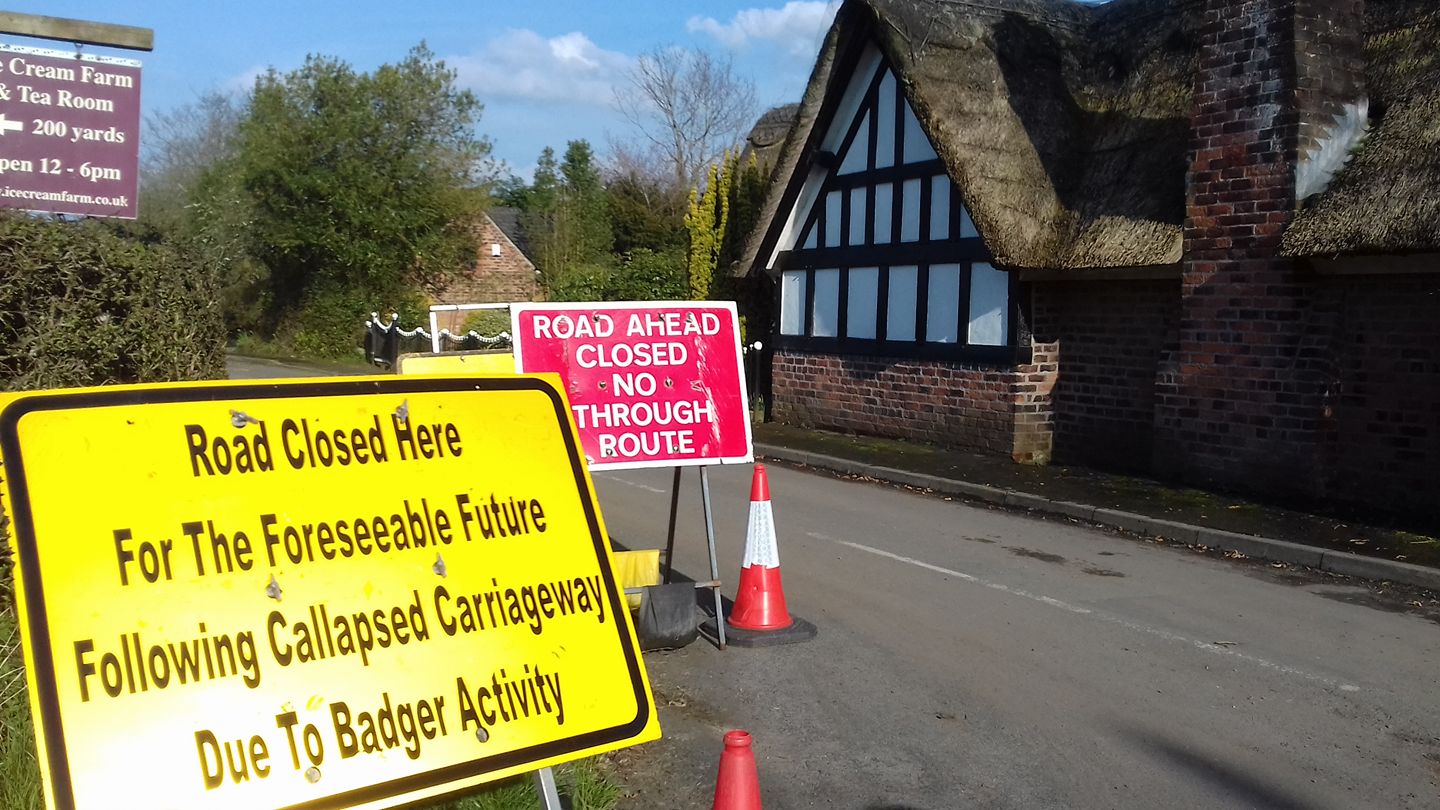 We had thought that we may not beat the rain, but bar a few spots near Rostherne, we managed toavoid any deluge or sustained shower, and arrived back at a point past Budworth, where some went our separate ways.

A short one for many. A few more miles for me. 🙂

Road Runs
To 25 or not to 25…. that is the (Withington Wheelers) question
Meeting point 22nd April

Track cycling. The perfect opportunity to get some excellent training and experience with the club. We have a British Cycling coach that will train you and give you probably the best 2 hour workout you’ve[...]
View Calendar
Add