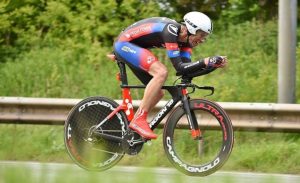 Today was my first ride this Year in a top class field as this event is traditionally the most difficult one to get into because of the fast course on the A50 at Etwall.  True to form all 80 entrants had faster last 3 season times than a 1:54 and nearly as many entries were returned because they were too slow.  I have some form but I’m certainly not at my best so the object of the day was to go quick enough so I can get in next Year when hopefully I will be back to something like my old form if this Winter goes well.  Alistair Stanway got on the reserve list but unfortunately didn’t get a ride on the day.  Better luck next time Al.

The forecasted storms rolled in about 45 minutes before my start time with hail stones the sizes of frozen peas hammering down and immediately about 5 riders who were around the start area threw in the towel before they had even started.  Fortunately the conditions were dry when my start time came and the weather was fine all the way around.

As a NW wind was blowing quite strongly I went for the bigger gear option to make the most of the strong tailwind return.  Unfortunately this meant a hard 21 mile grind down to Blyth Bridge on 106″ (59 x 15) fixed, including the horrible concrete mountain at 17 miles.  My plan was to totally bury myself into the wind and hang on for grim death with the strong tailwind back.  Unfortunately this course comes off the Dual Carriageway at 28 miles and does a 7 mile leg down single carriageway roads to Rocester and back, so the return would not be all plain sailing.

I struggled but made it to Blyth Bridge at 21 miles in reasonable time and the next 4 miles of strong tail wind got me through 25 miles in 1:00:37.  This included an exhilarating down hill ride coming back down concrete mountain at 38 MPH.  The leg Rocester was actually pretty quick as it was a cross wind but as I got back on the DC at 35 miles my lack of form was showing and I was struggling to keep the power on even with the strong tailwind.  In the last 10 miles 6 riders caught me in rapid succession as some of the real big hitters showed me how it is done.  Thanks to the tailwind I did the second 25 in 53:04 despite fading and crossed the line with a respectable 1:53:41 which is my 5th fastest ride ever and within 4 minutes of my PB so no complaints from me with my current level of fitness.  This put me a long way down the result board as 3 riders beat 1:40 (30 MPH average) and the winner John Dewey of Team Bottrill did a scorching 1:37:57.

To put it in perspective though, in the supporting local Association event on the same course, out of 40 riders only 2 beat me and the winner of that event only put 52 seconds into me.  Well over half of the 80 riders in my event beat 1:50 which is remarkable and I’ve never seen such a result board before with so many super fast rides on a pretty average day really.

There was also a Trike Association event on the same course before ours.  Alan Shuttleworth rode this and recorded a 2:31:30 which gave him 4th place behind winner Andy Newham of Lincoln Wheelers wo stopped the clock in 2:10:55.