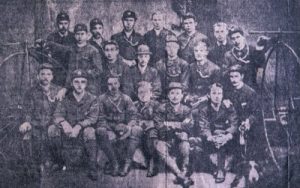 This is a classic in the World of Time trialling as this event has been held since 1889 and the list of winners is a who’s who in our sport.  The course is largely on quiet single carriageway roads and unfortunately the start time is 6:01am!😟

Only two brave (stupid) souls met the starter and Jimmy Williams got the short straw with his 6:15 start time.  This event was unfinished business for Jim who got knocked off by a car whilst lying third overall on the road, over quarter of a Century ago.  Today was all about trying out his bike / position / feeding in readiness for his 24 hour race in July, on similar roads.

Nearly one hour later yours truly rolled away trundling a 100″ fixed gear.  100’s are a real day to remember, much more so than a quick blast around a 10 or 25.  You hopefully catch people who may have started 10, 30 or even 60 minutes or more before you, but unfortunately unless you are very well prepared you fall victim to the speed demons behind you. Some ride at a good steady sustainable pace (like Jim for example) and others start like a novice and blow their brains out (like me for example).

I decided to give it a go despite the total lack of long hard threshold rides this season so went through 25 miles in 1:01:15, so far feeling good.  At 50 miles the pace was still there with a 25 mile split of 1:02:50.  I should say that I was caught for 14 minutes at 40 miles by a guy who must have been mechanically doping as no human can go that fast surely.😮 At 55 miles the legs didn’t want to listen to the head anymore and my average speed dropped from about 24.5 mph to 21 mph. Recovery was never going to happen but the rot didn’t get any worse.  I paced the third and fourth 25 mile splits well, but unfortunately this was two 1 hour 10 minute splits and I had to work hard just to keep that pace going.  Finish time was 4:23:33 which is by far my worst time for years but to be honest is as well as I could expect in my current condition.  This gave me 29th place out of 74 finishers so not too bad.

Jimmy was very happy with his return to distance racing with an excellent 4:33:25 just two days after a 75 mile training ride.  His back was a little sore but otherwise he felt good.  He came 39th overall.

Winner with an unbelievable 3:33:20 was Ryan Perry of Langdale Lightweights RT.  He knocked over 8 minutes off the course record and won by 3 minutes.  The difference in time between the first and last finisher was 2 hours and 18 minutes.