First of all, I would like to apologise to Dave Fearon, I used to complain about the length of his reports, and now I am just as bad, if not probably worse! I am even in danger of boring myself, let alone you lot!!😩

In preparation for this ride, having never ridden the Anfield 100 or the surrounding roads before, I neglected last Sundays club run in favour of a Recce. This was the first time I had ever used my TT bike for a training ride, so I changed my wheels to training wheels with clinchers and alloy rim  and swapped brake pads and headed off. The ride gave me a good understanding of how rough the course is.

This weekend, I opted not too ride Saturday of Sunday, instead doing a  couple of  walks with the wife. I spent Saturday Morning preparing my bike, swapping the wheels back over and lifting the stem by 10 mm to reduce the neck strain.

With a start time of 7:03, I set the alarm for 4 am in order to leave for 5am and arrive for 6am. I woke before the alarm as I was so excited (not). I was just glad I didn’t have the 6:01 start !!! I was on the road for about 20 mins when I realised i hadn’t swapped my brake pads back to Carbon ones, oh well, its too late now, I don’t intend to brake too much anyway!

In a similar fashion to last year, and as reported by Dave, just two brave souls (or stupid) entered this event, this time rather than Dave & Jimmy, it was Alistair and I. We had a brief chat at the HQ before we went our separate ways to get ready. The forecast wasn’t great, the BBC were showing light rain at 7, with heavier rain 8 & 9 before going back to light rain.

Al was off 10 mins before me, the start was a 3 mile ride from the HQ, when I started, it was dry,  I caught my minute man after 3 miles, the route heads back to up to Tern Hill, before turning left to Ravens cafe at Prees, Al Passed me before I got to the roundabout, so I had a quick check at the same point coming back, I was up on him by just over 1.5 mins. By now, the rain was falling, I was making good time just over 25 MPH. Back to Tern Hill and left towards Market Drayton for a mile or so, I passed Al again, and on arrival at the same point I was now about 4 mins up. By the time I reached 25 miles, I had a time of 59:37. 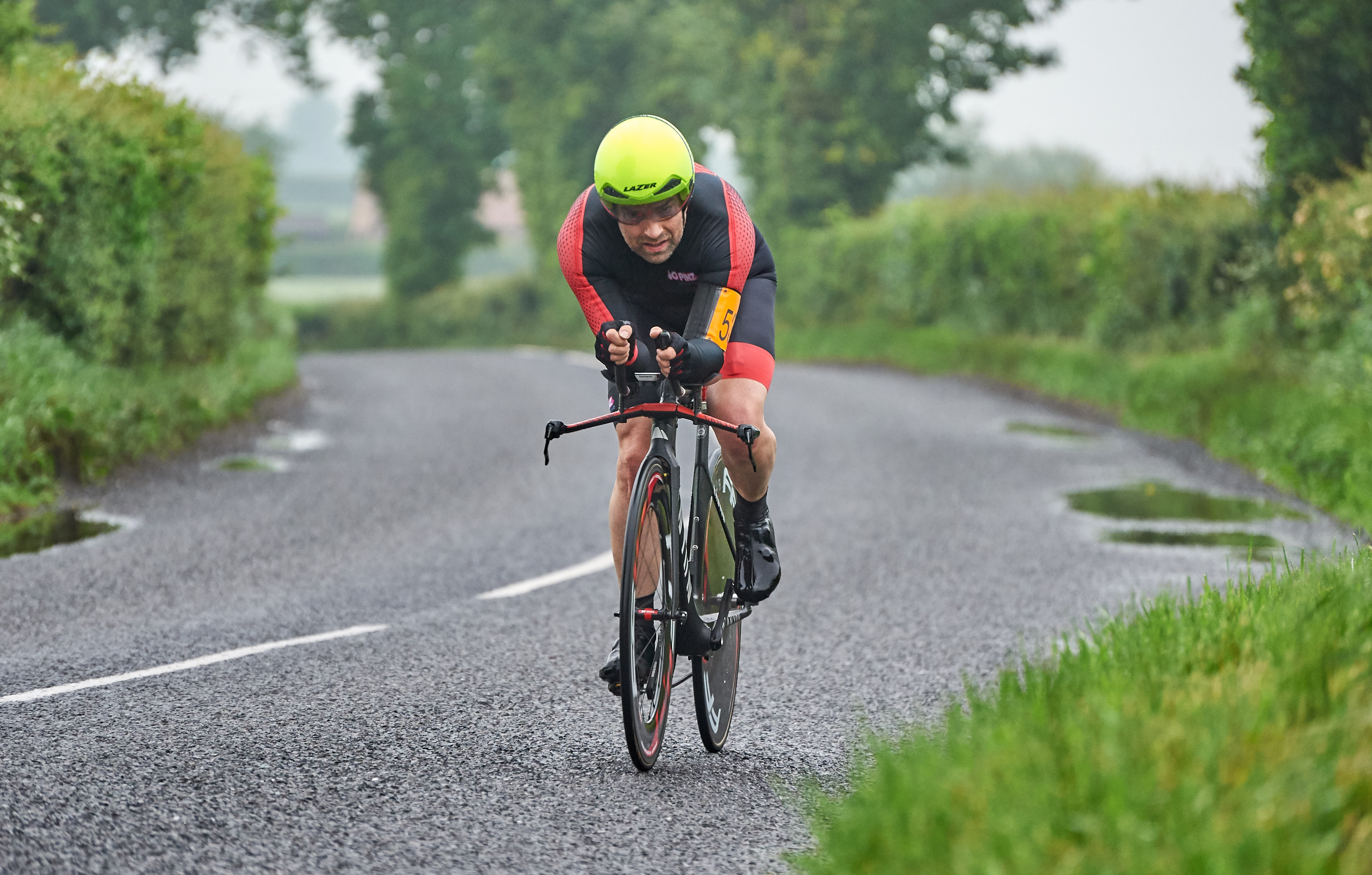 Soon I was on the lap course, 4 and a bit of them! Each lap was 17 miles! They say the best things in life are free,  well, each lap gave nothing for free, the best bit by far was the west of the course down to Shawbury, it rolled a little, but was certainly the quickest part of the lap. However, when we turned left,  it was into the head wind,  4 miles later, uphill a little to the roundabout and a new gravel surface (not good, next year may be better once the cars have flattened it) before turning left again to head back to the roundabout turn. Once past the feeding station at 40 mile on the first time, which I didn’t use,  you hit the “Peplow Pave”!!! This was a mile or so stretch of really horrible rough tarmac, trying to pick you way through the smoothest part, was a challenge. 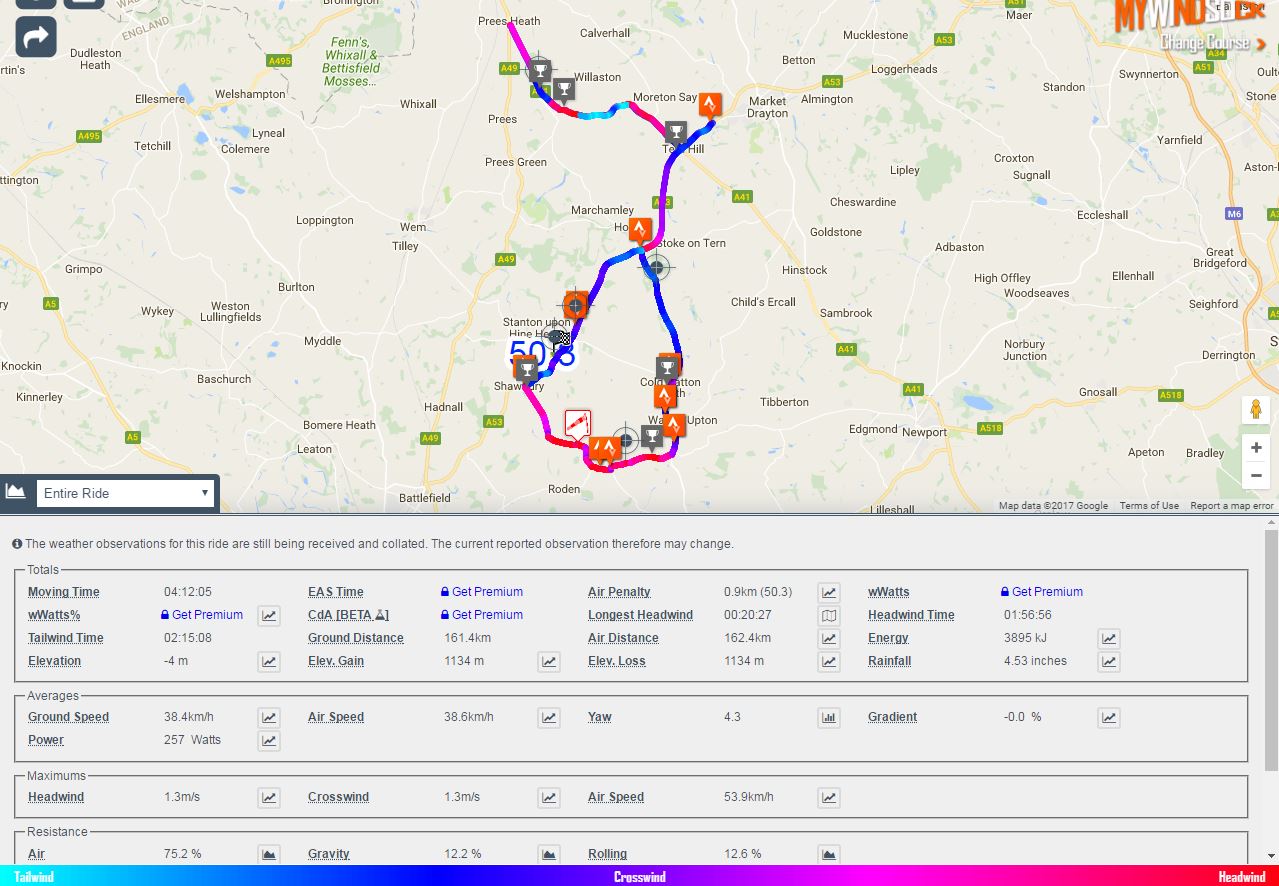 Note the colour key at the bottom

It seemed that every time I was on the West of the course it was raining and East wasn’t. 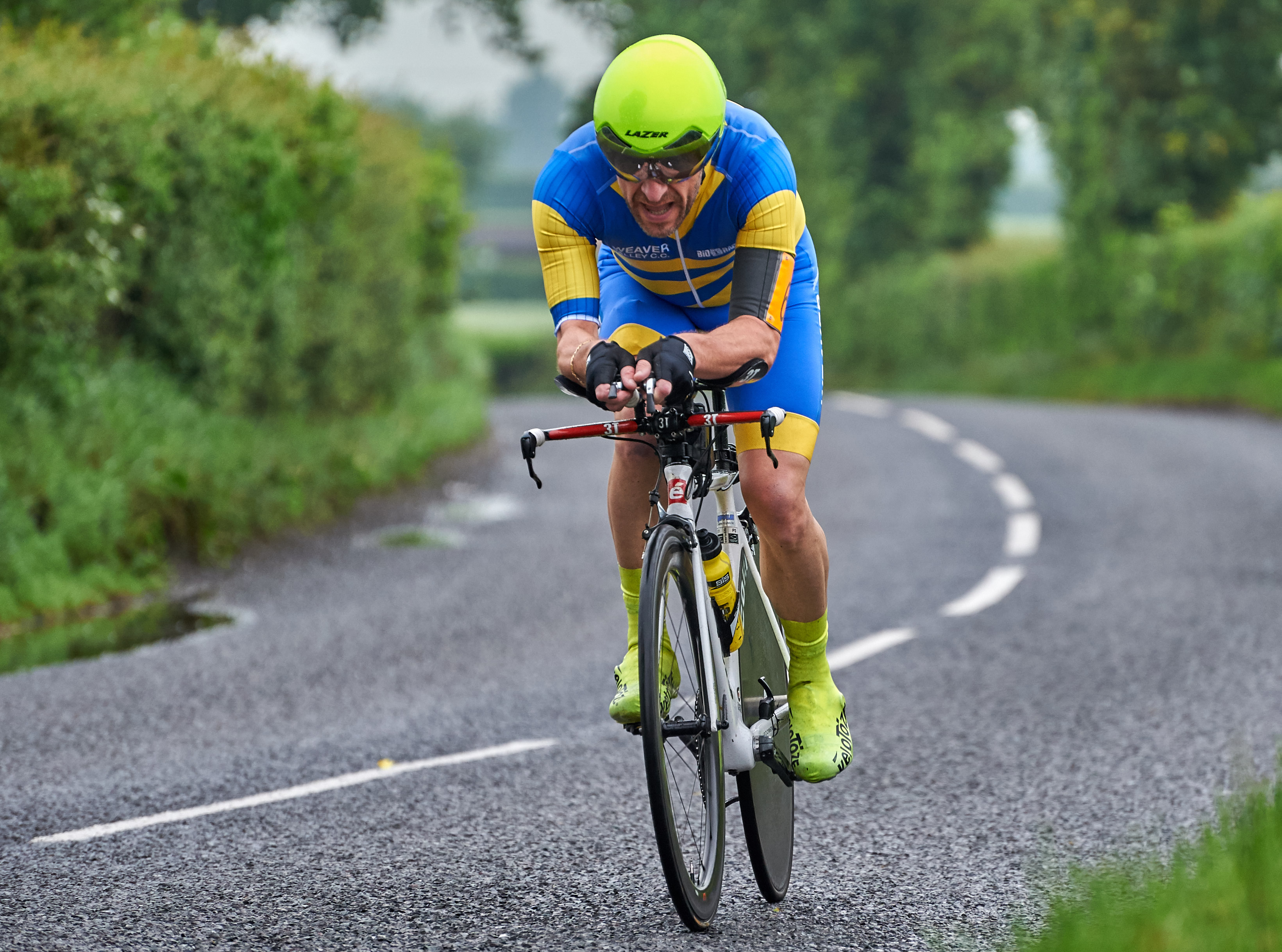 I was probably just going through the motions until i was passed by nr 60, who I had passed miles earlier, this gave me the kick up the arse I needed, I used him to keep pace, then he pulled up with a mechanical. Approaching the start of the last lap, nr 61 passed me on a rise, again I had passed this lady miles earlier, another kick up the arse, I caught her and passed her again. With about 10 miles to go 61 passed me again, I tried to keep pace but she slowly extended the gap finishing about 40 seconds ahead of me. The kick up the arse worked though though, as my 4th 25th was 45 seconds faster than my 3rd 25.

My PB was 4:22 entering this event, I was hoping for a sub 4:10, i was slightly disapointed to finish with 4:11:24, but that said, It is a rough old course, which wasn’t helped by the wind direction or the rain, I finished in a respectable 14th, which i am really pleased about.

I believe that Adam also won a 50 on Sunday, and completed a half marathon following each TT!!! Animal!