A bit of windy, rainy Freewheeling

At 09:55, I turned up at the legion, to see a lonely club run leader. I had already battled the first 12 miles of the day into the wind, and did expect a few more attendees for the comp. and to get the extra miles in. Most probably had the sense to go out on the better of the two weekend days.

Nevertheless, almost on the dot of 10, Carol arrived, then Steve T., hoping to snatch a victory today. Then a few more hardy souls, Jon, Paul, Connor, Jamie, Greg and Elliott. But where was defending champion Mr Keen? Had he driven out (as I suspected)? Aah. Last minute, he arrives, with a confident smile.

We set off thinking that it wasn’t too bad, heading out towards Knutsford and Tatton Park. The wind was blustery, but at this point we hadn’t seen the worst of it. As we hit Astley, we also hit the headwind. Ouch. Legs weren’t expecting the pain yet.

Fortunately, we all got a brief rest as Jon kindly punctured. As we fixed it, or rather as Al did, he also showed us all his surgical gloves. Jon wasn’t impressed, as being the very picture of sartorial elegance himself, the colour of Al’s gloves (as John calls them in aforum post https://www.weavervalleycc.org.uk/forum/viewtopic.php?f=32&amp;t=2096#p10722 ‘inspection gloves’) clearly looked to offend him, as you can see in the photograph below. 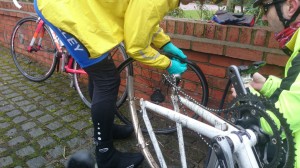 Good grief Alan, don't you know you should never wear that shade of green to complement your bright yellow rain cape?

A host of shivering bodies at the top of the hill saw me off first, so that I could at least end the thing and grab a couple of shots for the site(!).

A steady stream of riders literally inched their way down the hill against the wind, until finally, the freewheeling-meister, Mr John Keen, posing like someone from a UCI pro-team, drifted down in silence, wobbled his front wheel from side to side,  to edge easily into the lead and clinch, yet again, the title of Downhill Freewheel Champion! 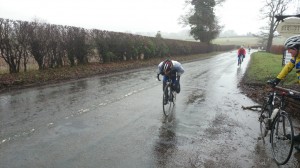 The (sometimes disputed by those who are jealous) champion of the Downhill Frewheel.

After that, we decided that hypothermia was rubbish, and went straight home…