The past is a foreign country: they do things differently there.

Sunday morning was cold and bright. Knowing that the long run was liable to be a short run I set the alarm early with the intention of getting an extra hour in. Sense prevailed however when I saw the thick frost and imagined the black ice on the lanes and so I went back to bed for an hour. This turned out to be a good move considering how I felt later on.

There was a good turn out at the club although not as many takers for the long run as there could have been. Be brave people, if a fat middle aged man like me can do it, so can you! As it was, Jules, Geoff, Colin Walsh, Kevan, Mark, the 2 Paul’s, Stuart and myself set off for the lower slopes of the Peak District. Little did I know we would soon be heading back in time.

Jules and Paul G, did the first 15 minutes on the front as we headed through Goostrey and towards Lower Withington but as soon as Colin and I took our turn i knew something was amiss. I was suffering like a suffering thing and my stint was brief, my legs hollow.

The ride carried on at a steady pace but this didn’t stop me getting dropped on the little rise (the old downhill course) going in to Macclesfield. Kev dropped back for me and we all regrouped towards the top.

On through Macclesfield and Bollington, our Mother Hen Jules shouting, ‘half a rev’ and, ‘i said half a rev, not stop’, at various intervals and generally keeping us in order. We rode direct towards our lunch stop, no detours taken in view of the still slipperly lanes. The group staying nicely together without mishap but much chatter from most but not me. 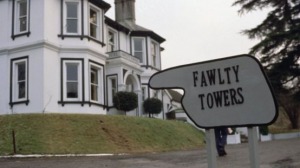 We arrived at the café in 1953. In a festive touch they had erected a 15 foot Christmas tree but with rationing still in force there was only enough decoration for a 5ft tree. It is an average size café with about 20 spaces, there were 2 tables occupied, about 4 people. You wouldn’t have thought that our party of 9 would have sunk the ship would you? However, it was 1953 and British hospitality was still languishing in ‘One Soup’, and ‘Fawlty Towers’ territory so it took over a half hour just to take our orders, these orders were written down wrongly without any humour or grace and then repeated, corrected, confirmed and corrected with much scribbling, crossing out and furrowed brows from our very own Mrs Overall. Sitting around the table we were looking at each other in disbelief and it was all such a mess I was wondering if the Major or Polly was going to wander in.

Orders taken and conversation turned to other matters. How many people have thrown an expensive tool away with the recycling. A discussion between spouses perhaps…. 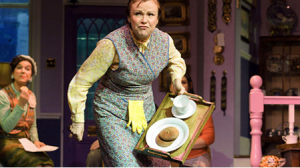 It came time to pay and Kev, smart man in view of the instant queue that formed behind him, was up first. £10.05 was his bill, he had a £10 and a £20 but instead of rounding down to £10, ‘one soup’ insisted on taking the £20 and spent an age counting out the farthings into Kev’s waiting hands.

Unfortunately I was last to pay and for my £7.15 bill (£1.50 for the cheese by the way) I presented a £20.00. There was a massive sigh before the kind lady (or was it Basil now) spent an age rearranging the change in her purse and the till before eventually giving me my change. An hour and a half for a café stop, most of the time spent waiting; suffice to say we will not be going back here in a hurry. Miraculously, as soon as we got back out on the road the time shifted back to 2016. Spooky.

Jules lead us a different way home to normal, via Alderley Edge and Wilmslow. This  was uneventful apart from Mark throwing his front light on the floor to see how well it would bounce. It didn’t. Pieces collected we carried on. We rode on through Ashley and the Tatton mile, this is where I peeled off in order to crawl home having completed barely 60 miles. The hollow legs I suffered have subsequently been explained by the nasty cold that hit me on Sunday evening and is lingering still. Of course, after all is said and done it was a great day, I’d rather be out on my bike with friends than just about anywhere else. Of course, dear wife when you read this please remember i would rather be with you and Kate before absolutely anything but if i don’t exercise i will be a little lump of lard and you won’t love me anymore.